Top Posts
Malaysia’s Fight Against Climate Change: Perspectives from a Central Banker
Crypto-assets and the Relevance of International Private Law
Whither International Banking Regulation?
Interview with Mr. Selman Bicaco Urrutia, Head of Private Banking...
Interview with Ms. Jelena Galić, Chairperson of the Board of...
The International Banker 2022 Western & Eastern European Awards Winners
Home Brokerage Is Oil on Its Way Back up to $100 Per Barrel?
Brokerage 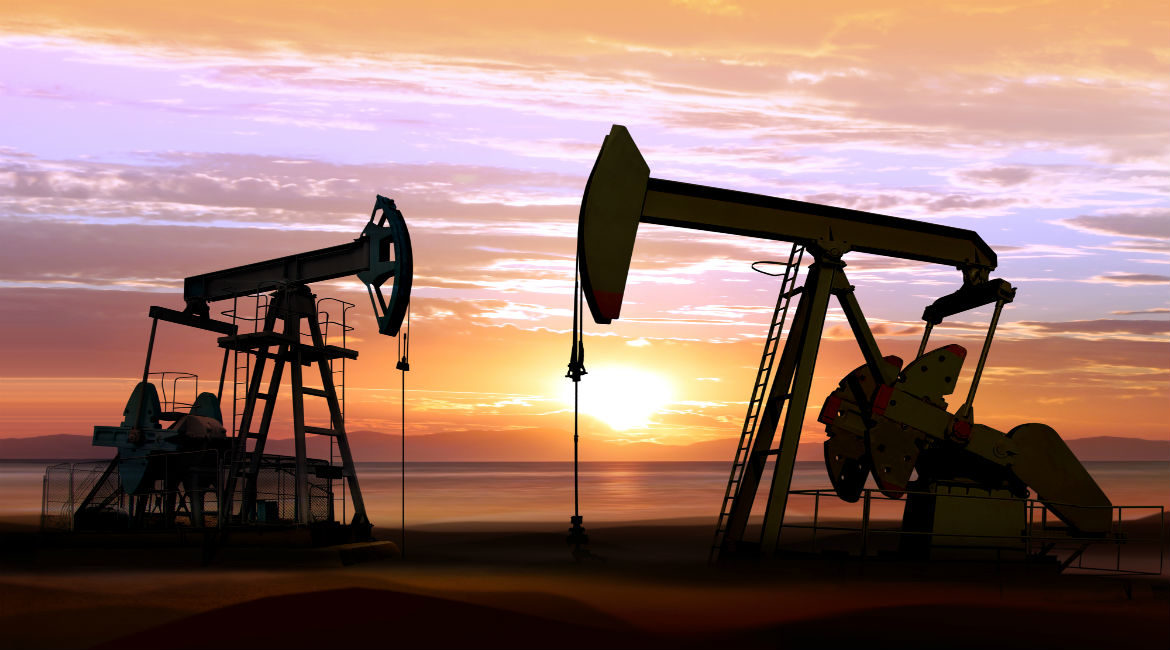 By early April, global crude-oil benchmark ICE Brent Crude Futures had closed over $70 per barrel for the first time since November 2018, having already surged by some 30 percent since the beginning of the year. Just a few weeks later, it rallied to $75 per barrel to hit a near six-month high, before modestly retreating. The gains notched up this year have now raised much speculation over whether crude can sustain its rally and hit $100 per barrel in the near future. If so, it would be the first time since 2014 that it reached this milestone. 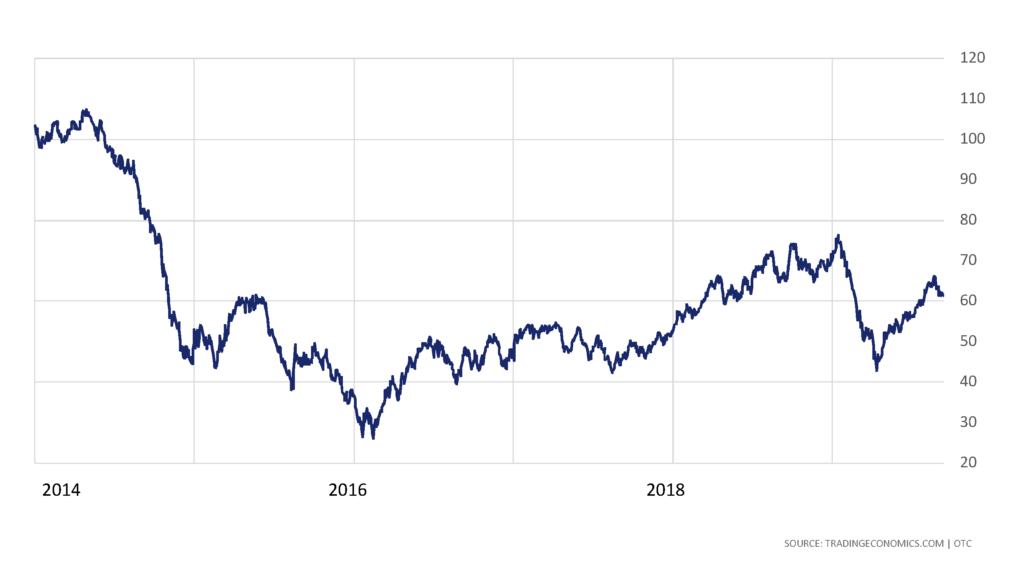 A tightening of the global crude-oil market has underpinned much of the 2019 price rally to date, with both falling supply and robust demand growth contributing to the bullish sentiment. OPEC (Organization of the Petroleum Exporting Countries) supplies were recorded to have hit a four-year low in March, dropping by more than half a million barrels, or a hefty half of a percent of global demand.

Production cuts by OPEC+, which includes 10 non-OPEC countries—most notably Russia, Mexico and Kazakhstan—in addition to the organisation’s 14 member countries, are aiming to prevent excess supply in the global market following the dramatic drop in crude prices late last year. As such, the alliance has agreed to slash output by 1.2 million barrels per day (bpd) during the first six months of 2019, before meeting again in June to decide whether to extend the agreement. The plan has been mostly successful to date, with OPEC supply falling by more than 1.5 million bpd this year, which, in turn, has helped drive prices higher. Saudi Arabia has been chiefly responsible for the cuts, having reduced output by a further 324,000 bpd in March.

Geopolitical issues around the world are currently playing a hugely influential role in supporting higher oil prices, and they may well cause further bullish movements during the coming months. The United States recently upped its pressure on geopolitical foe Iran by ending its sanctions waivers that had allowed certain countries—India, China, Japan, South Korea, Turkey, Greece, Taiwan, Italy and South Korea—to continue purchasing oil from the country. According to the US State Department, allowing the waivers to expire allows the US “to get Iran’s oil exports to zero and deny the regime the revenue it needs to fund terrorism and violent wars abroad”.

Iran itself has warned that oil would hit $100 per barrel if sanctions pressure is intensified. “Not extending the oil waivers of some countries is another side of the US measures against Iran. But if Iran’s oil is fully sanctioned, (the) oil price will go higher than $100 per barrel,” Fereydoun Hasanvand, head of the Parliament’s energy committee, recently stated. This would most likely transpire with Iran shutting the Strait of Hormuz—a key global transport route for crude that has one-third of the world’s sea-borne oil passing through it every day. According to Mohammad Bagheri, chief of staff of the armed forces, “If our oil is not to pass the Strait of Hormuz, oil of others will certainly not pass through this strait either.”

Tensions have also escalated in Libya, where a conflict between the internationally recognised government and the Libyan National Army led by military strongman Khalifa Haftar threatens the stability of not only the country but also the Libyan energy industry. Indeed, the United Nations has warned that the clash is pushing the North African nation towards a full-blown war. Should such a scenario transpire, then Libya’s oil output, which currently stands at more than one million bpd, is likely to be endangered as it has been on many previous occasions in recent years.

And the outlook for Venezuela—a major oil producer and OPEC member—appears to be worsening. With production having plummeted by nearly 30 percent in March, the beleaguered Latin American nation is now struggling with a full-blown economic crisis, US sanctions against its state-owned oil company PDVSA (Petróleos de Venezuela, S.A),and a potentially damaging political standoff between current president Nicolás Maduro and opposition leader Juan Guaidó. The end of April saw US-backed Guaidó call for a military uprising to overthrow Maduro’s government. Again, should conditions deteriorate further, then the resultant drop in oil production will add further bullish support for oil prices.

Whether crude reaches $100 per barrel this year, however, remains to be seen; for some, it may be a bridge too far. While the crude market has tightened this year, the International Energy Agency (IEA) recently stated that markets remained “adequately supplied” and that “global spare production capacity remains at comfortable levels”. Fitch Solutions Macro Research (FSMR) expects Brent to average $73 per barrel this year, the same as it predicted in April and $2 lower than its March estimate. The intelligence-solutions provider noted that conditions “look more challenging for risk assets, including oil” in the short-term, and that with markets showing more volatility recently, “there are early signs that investors are tilting back towards safe havens”. Bloomberg, meanwhile, forecasts a lower 2019 average for Brent of $68.50 per barrel.

But that doesn’t necessarily mean that crude’s 2019 rally is over. The most recent Reuters monthly survey at the end of April saw 31 economists raise their forecast for 2019 prices. Frank Schallenberger, head of commodity research at LBBW Asset Management, believes, “The elimination of US waivers for Iran will take another 0.5-1 million barrels per day from the oil market….Together with political tensions in Libya and chaos in Venezuela, this will make the tight situation on the supply side of the oil market even tighter. There is no doubt that high oil prices are here to stay!”

Many still see $80 per barrel of oil being achieved this summer. Since the US decision not to renew the Iran sanctions waivers, there has been little to suggest that Saudi Arabia will significantly boost production to make up for the Iranian crude shortfall that is likely to materialise. Indeed, Saudi Energy Minister Khalid al-Falih recently told Russia’s RIA news agency that although the top OPEC producer would commit to requests to replace Iranian oil, “we will do this remaining part of the OPEC+ deal, we will stick to it. We do not need to voluntarily exceed the limits set.”

And with the International Monetary Fund (IMF) forecasting in January that Saudi Arabia requires an $85-per-barrel oil price in order to balance its budget, there appears to be a strong economic incentive for the Kingdom to limit its output during the coming months. According to Ziad Daoud, Bloomberg’s chief economist in the Middle East, “Saudi Arabia’s fiscal break-even could be as high as $95 per barrel this year, but the IMF is probably assuming higher cash transfers from Saudi Aramco to the Ministry of Finance.” Given the country’s considerable influence over both OPEC and international oil markets, any decision to continue curtailing oil production into the second half of 2019 is likely to send prices soaring. As such, all eyes will now be on the OPEC+ meeting on June 25-26, when the alliance decides whether or not to extend the original output-cut agreement.

Mergers and Acquisitions Hold the Next Growth Story for SSA Banks