Top Posts
How Gamification is Catapulting Digital Banking to the Next Level
Challenges Remain, But There Are Opportunities to Be Had in...
Interview with Mr. Olukayode Pitan, Chief Executive Officer and Managing...
Commodities Outlook for 2023
The Value of Cash in a Time of Crisis: How...
The US-Africa Leaders Summit: Fostering a Closer Relationship with the...
Home Brokerage Is Regulation Finally Taming Shadow Banking in China?
Brokerage 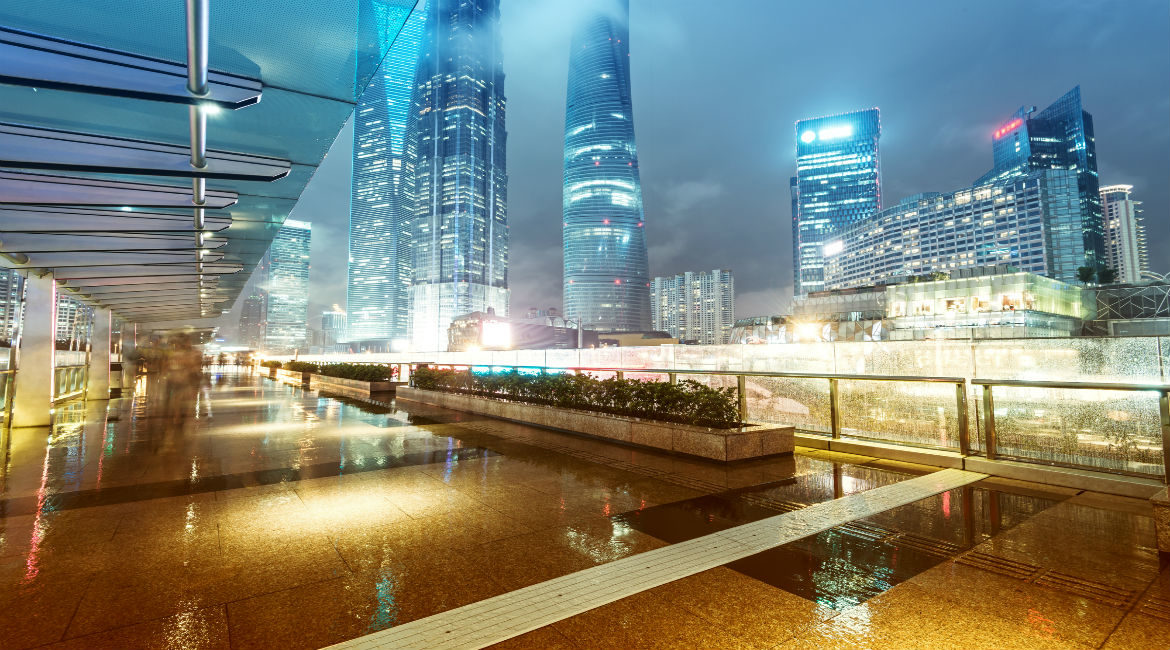 Having injected fresh energy into the curbing of shadow banking during last year’s final quarter, it seems that China is now finally seeing its efforts starting to pay off. The once-booming controversial financial sector, which has on many occasions caught the ire of regulators, appears to be showing distinct signs of faltering as evidence mounts of investors withdrawing from those savings products that once helped to bolster the shadow-banking sector to unprecedented, dangerous levels of leverage. But now the government appears to be increasing its commitment to cracking down on leverage across the board in the financial sector, and it would seem that shadow banking is feeling the strain of this added pressure.

Moody’s believes that the sector has finally stopped growing; indeed, the ratings agency found that the first half of 2017 marked the first time since 2012 that the country’s gross domestic product (GDP) growth outstripped the rate of growth of shadow-banking assets. A Moody’s report published in November showed that shadow banking grew only negligibly to 64.7 trillion yuan at the end of the six-month period, from 64.4 trillion yuan at the start of the year. By June, moreover, Moody’s estimated shadow-banking assets accounted for 83 percent of GDP, which is down from a peak of 87 percent recorded in 2016.

Bloomberg figures, moreover, support the view that shadow banking is slowing down: 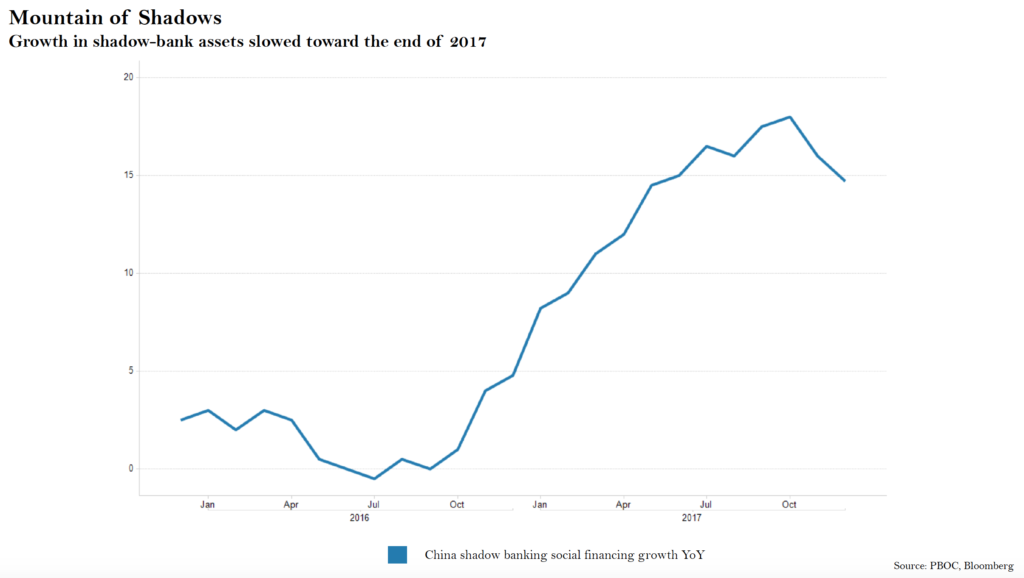 As a reminder, shadow banking is “credit intermediation involving entities and activities (fully or partially) outside the regular banking system” or “non-bank credit intermediation in short”, as defined by the Financial Stability Board’s (FSB’s) report on the subject back in 2013. Through the use of such instruments as entrusted loans, trust loans and undiscounted bankers’ acceptances, shadow banking operates as a parallel financial sector that remains off the official issuers’ balance sheets through the use of certain accounting practices.

In China, the bulk of shadow banking revolves around complex lending practices being conducted by mid-tier banks and regional lenders looking to compete with the country’s banking behemoths. Such banks are lending to an array of institutions, including funds, trust firms and securities companies, which in turn reconstitute the loans into asset-management products to be resold to investors. This enables a corporate loan to eventually end up as an investment in an asset-management product, and allows banks to keep them off their loan books. Such methods are also sometimes known as “channel business”, whereby once-legitimate assets are transferred into hidden channels, out of the regulator’s reach. It is believed the most popular channels for such funds to flow into are local-government infrastructure projects and real-estate development.

As such, the true level of risk being borne by China’s financial sector remains consistently and substantially under-reported. Such risk, moreover, is exacerbated by the very fact that the products tend to attract issuers that have substantial debt and have previously found it difficult to gain access to traditional lending channels such as bank loans. Last year, both Moody’s and Standard & Poor’s downgraded China’s sovereign rating, specifically attributing the move to their concerns over the nation’s rising debt. It is perhaps one of the main reasons as to why authorities have now moved definitively to curb shadow banking in the country.

Renewed efforts to rein in shadow banking by China’s financial watchdogs began in earnest last year following the Communist Party’s 19th National Congress in Beijing. Following the 30 or so rules established by the government from March 2017 to boost deleveraging, a new set of rules was then implemented late in the year, targeting the typical asset-management products that financial institutions sell to raise funds for off-balance-sheet investments. For instance, the central bank has issued draft guidelines to provide more strict definitions of such products under the umbrella of “asset-management products”, which covers almost 100 trillion yuan worth of investment instruments. Whereas previously regulations were implemented in accordance with the type of issuer—such as banks, securities issuers and insurers—the new regulations aim to be classed along the types of assets that the asset-management products target, irrespective of the industry type.

In early January, the China Banking Regulatory Commission (CBRC) published regulations that limit the number of commercial banks in which each investor can own holdings, which is intended to reduce specific cases of “disorder” in the banking sector, such as the abuse of rights by major shareholders and the existence of “invisible shareholders”. Now each investor is permitted to hold at least 5 percent of no more than two commercial banks, or a controlling stake of no more than one lender. If more than 5 percent is sought, additional CBRC approval is now required. Major shareholders are also required to disclose their ownership structures up to the ultimate beneficial holder.

What’s more, the new regulations will aim to punish banks that use their own capital to provide guaranteed coverage to customers who realise losses on their investments in wealth-management products. Such implicit guarantees have played a significant role in enabling the less creditworthy borrower to raise funds. As such, a new era in which there is an absence of such guaranteed security should make investors more averse to participating in such markets.

And it seems to be working. Reports have emerged recently of investors pulling back from certain debt-like savings products. In particular, $3.8 trillion worth of trust products, which local governments and property developers riddled with debt, used to raise money from the Chinese public have been stymied, with two specific types of trust products having reportedly had to delay payments as liquidity has dried up. The delays illustrate the lack of implicit guarantees being available for such products, which underlines the fact that such products carry significantly greater risk now that there appears to be little assurance that the government will step in. The situation will undoubtedly also have been supported by the ruling in December from the CBRC, which discourages banks from referring their clients to invest in such products, as well as the regulator’s recent mandate that firms tighten their risk management and disclosure around entrusted loans.

While it may seem as though Chinese authorities have started to get a grip on shadow banking, Moody’s also warns that the ability of the formal financial system to replace shadow credit lines “may not be a perfect substitute”. Central bank Governor Zhou Xiaochuan, meanwhile, has also warned of the emergence of latent risks that are “hidden, complex, suddenly contagious and hazardous”. Among them could well be the possibility that without the carrot of being able to offer high returns to customers, regulations on asset-management products could severely constrain the ability of smaller lenders to raise funds. In turn, they may be forced to raise their interest rates on deposits, which could lead to rates being forced up across China’s banking system. As such, profit margins could well be squeezed throughout the industry.

Nevertheless, with more evidence now indicating that China is achieving positive results from financial deleveraging, the central bank will undoubtedly be pleased that shadow banking is finally showing signs of being tamed.