Top Posts
How Technology Is Helping to Solve Global Supply-Chain Issues
UK Inflation Climbs to Fresh 40-Year High
Extended Reality and the Metaverse Are Leading Financial Services into...
Digital Currency: India’s Move Towards a Digital Financial System
Algarve Snapshot: The Growth of Overseas Buyers
Will London Have to Send More Banking Jobs to the...
Home Brokerage Malaysia and the Green Shoots of Recovery
Brokerage

Malaysia and the Green Shoots of Recovery 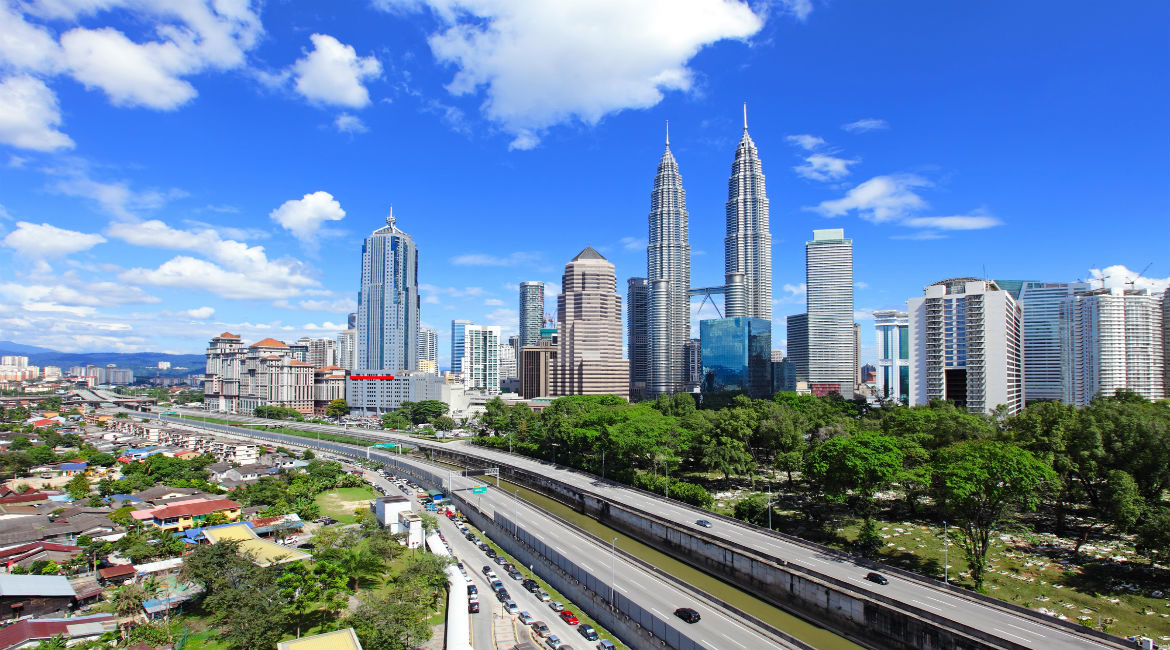 One of Asia’s biggest underperformers finally appears to be on the road to recovery. After almost three years of heightened political unrest, low commodity prices and a slump in investor and consumer confidence, it appears that investors are now returning to Malaysian financial markets. In addition, there now also seems to be a renewed sense of optimism surrounding the country’s growth outlook.

If one had simply examined Malaysia’s economic health over the last few years from a gross domestic product (GDP) perspective, one might not have considered Malaysia to be so badly damaged. Indeed, the Southeast Asian emerging economy managed to register annual GDP growth of 4.2 percent in 2016: 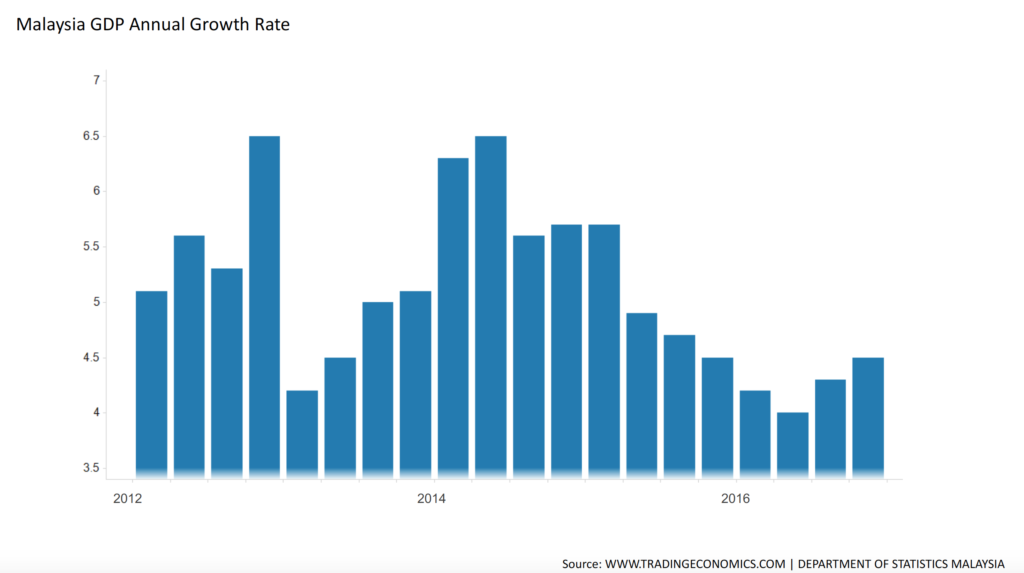 However, confidence in Malaysia’s markets in recent years has been severely dented following the revelations of alleged large-scale misappropriation of funds from state development fund 1Malaysia Development Berhad (1MDB). Along with the collapse in global commodity prices, the scandal sent Malaysia’s currency, the ringgit, into a virtual freefall—between 2014 and 2016, it shed almost 40 percent of its value. It was also the worst Asian currency performer between October 2016 and March 2017, as expectations over tighter US monetary policy and the election of Donald Trump triggered an exodus of global investment funds from emerging markets.

The ringgit appears to be on the rebound this year, however, having reversed course in January after trading at its lowest level against the dollar since 1998. 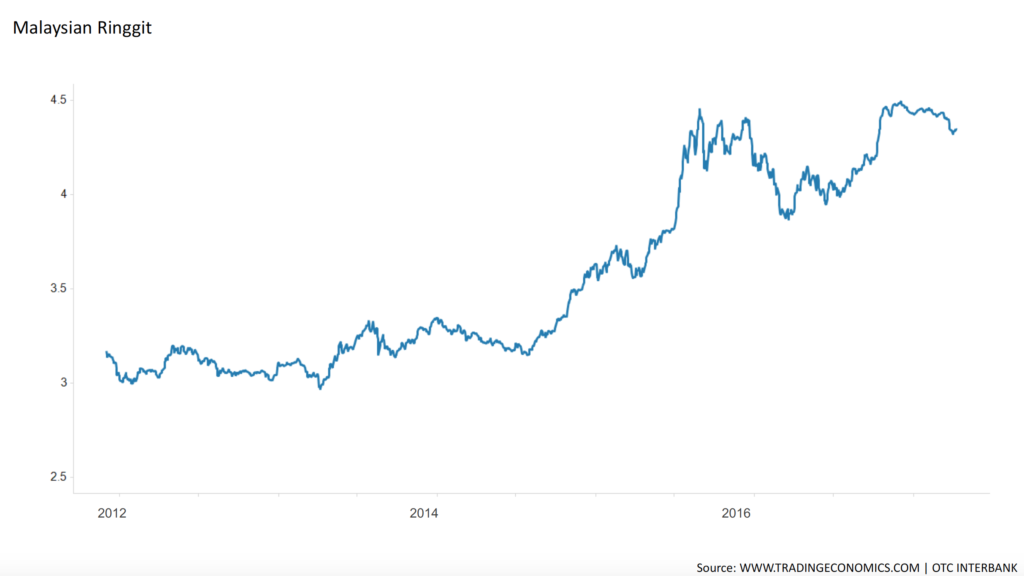 Bank Negara, Malaysia’s central bank, initially responded to the ringgit’s precipitous decline by implementing a crackdown on offshore trading of non-deliverable forward contracts in November, in a bid to minimise speculative trading. However, this move also had the unintended consequence of inducing a withdrawal of interest from Malaysia’s financial markets by global investors, who found it difficult to hedge their exposures to Malaysian assets. By January, therefore, the ringgit had managed to fall to 19-year lows.

Since then, Bank Negara has attempted to return liquidity to the ringgit by allowing foreign and domestic fund managers to manage their currency exposures to the tune of up to 25 percent of their invested assets. The central bank also mandated that Malaysian exporters could hold only a maximum 25 percent of export proceeds in foreign currencies, as opposed to the previous 100 percent, thus ensuring more ringgits can be used to promote a “deeper, more transparent and well-functioning onshore FX market where genuine investors and market participants can effectively manage their market risks with greater flexibility to hedge on the onshore market”, in the words of the bank committee statement.

In addition to a more stable ringgit, there are now clear signs that the worst is over for Malaysian markets. The country’s benchmark equity index, the FTSE Bursa Malaysia KLCI Index, has risen by around 7 percent since the beginning of the year, making it one of the world’s best-performing stock markets. According to MIDF Research, net foreign buying of Malaysian equities extended to 13 consecutive weeks for the week ended May 5, which is easily the longest streak for foreign-investor interest in Asian emerging markets. Malaysian investment bank AmInvestment, meanwhile, expects the KLCI to record growth in corporate earnings for 2017 and 2018 of 7.2 and 8.3 percent respectively, principally on expectations of a more stable currency going forward. According to research notes from Morgan Stanley, sizeable Chinese infrastructure investment into Malaysia is also playing a key role in the improving sentiment. As part of its One Belt, One Road initiative, China has ramped up its presence in the country, signing 14 development agreements in November totalling almost $35 billion. This investment surge is expected to provide additional bullish support for Malaysian markets going forward.

With commodity prices having moderately recovered in 2016, moreover, the outlook for Malaysia’s trade balance and overall economic growth is also now being revised higher. Malaysia’s Composite Commodity Index, which includes the country’s biggest export staples such as oil, palm oil and rubber, has soared by over 40 percent since its 2015 lows, indicating a strong turnaround in the fortunes of Malaysia’s commodity exporters. For example, the country’s state oil company, Petronas, has managed to swing back to profit in the wake of higher oil prices, having posted net income of RM 9.42 billion ($2.1 billion) for last year’s final quarter, from a loss of RM 4.69 billion for the fourth quarter of 2015.

RHB Research stated in early May that it expects Malaysia’s export growth to pick up from the 1.1 percent recorded in 2016 to reach 10 percent this year, a figure that is an upward revision from the 6 percent RHB projected a month earlier. According to its April report, RHB stated that “exports gained pace to 26.5 percent year-on-year in February, its quickest pace since March 2010, from 13.6 percent in January and…10.7 percent in December”. The locally based investment research company has attributed this export growth to a recovery in demand for commodity products; an increase in global semiconductor sales in late 2016 that has led to an increase in exports from Malaysia’s electrical and electronics sector (which accounts for a sizeable 35 percent of the country’s total exports); and a generally brighter global trade outlook as a result of stronger global growth. Indeed, the World Trade Organization projects global merchandise trade to rise by 1.8 to 3.1 percent in 2017, following the losses posted in 2016 and 2015 of -2.7 and -11.8 percent respectively. Recent figures for March, moreover, show that exports continue to grow briskly, having recorded a 24.1-percent expansion year-on-year. RHB is projecting, therefore, Malaysia’s current account to improve to RM 33.7 billion this year—equivalent to 2.6 percent of GDP—from RM 25.1 billion, or 2 percent of GDP, in 2016.

As a result of the improved trade picture, RHB expects Malaysia’s economy to grow faster than it did in 2016. Its GDP growth outlook for this year is 4.5 percent, versus the 4.2-percent growth the country achieved last year. Elsewhere, the IMF (International Monetary Fund) expects growth to hit 4.5 percent this year and 4.7 percent in 2018; the ADB (Asian Development Bank) sees GDP growth of 4.4 and 4.8 percent for this year and next; and BMI Research—the research unit of the Fitch Group—sees growth coming in at 4.7 percent for this year.

Given that the government has continued to remain in power, virtually unscathed from the 1MDB scandal, it appears that the strongest impact on Malaysian markets from the political fallout has now been and gone, which in turn should lead to more global investment funds returning to the country. That being said, among the most important upcoming events in the Malaysian calendar is the general election, which is due to take place by August 2018. Many believe that the government will call the election sooner than this date, perhaps even as early as September 2017. According to Morgan Stanley, Malaysian markets are likely to receive a fiscal-spending boost from the government shortly, prior to elections taking place, in order to “improve consumer and sentiment”. Nevertheless, some expect this election to pose the biggest challenge to the ruling party—which has been in a power coalition with other parties since 1957—in many years. As such, the coming months will be of profound importance in determining Malaysia’s economic and political health. In the meantime, however, the country’s economic prospects look brighter than they have in a long time.

Is a Silent Epidemic Costing the Finance Industry its Top Talent—and Billions Along with It?

Why Brazilian Banking Could Be Seriously Impacted by Fintech