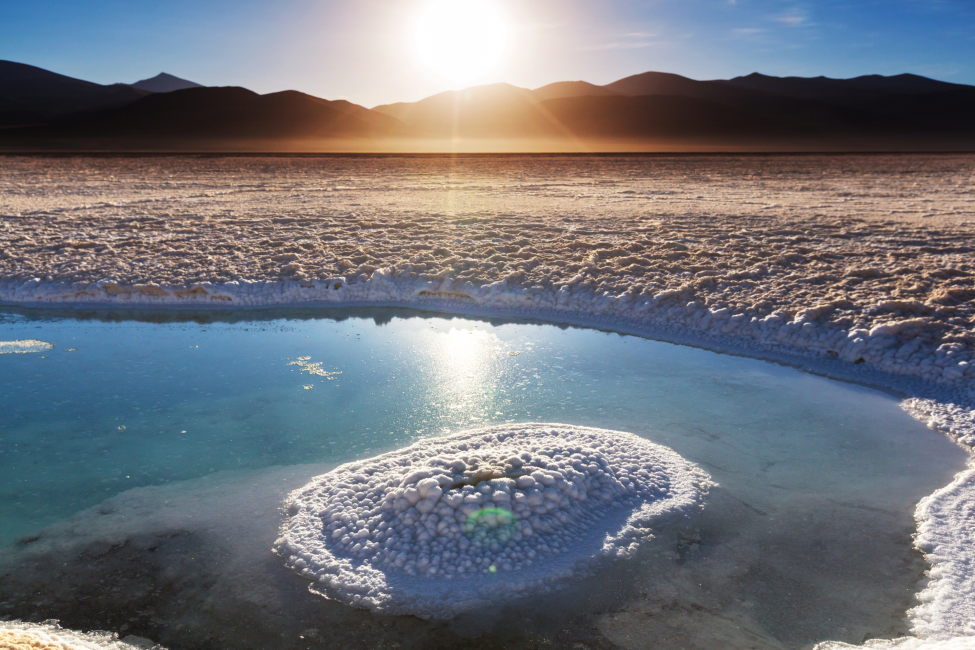 On April 21, Mexico officially nationalised its lithium industry, with the bill proposed by President Andrés Manuel López Obrador (AMLO) to modify its existing mining law receiving the stamp of approval from the Congress of the Union. “The lithium is ours!” the Mexican president triumphantly declared soon after the amendments were passed.

Despite an earlier failure to expand the state’s influence over the electricity sector, AMLO scored a major victory for resource nationalisation with the lithium approval, which required only a simple majority to be given the go-ahead. The bill travelled swiftly through both houses of Mexico’s Congress—with AMLO presenting it on April 18 and the lower house passing it on the same day with 275 votes in favour and 24 against, and the Senate passing it one day later, with 87 votes in favour and 20 against. The result was then published in the Mexican Official Federal Gazette (Diario Oficial de la Federación), which detailed the amendments and additions that were made to the mining law, modifying articles 1, 5, 9 and 10, which had previously promoted “an economic orientation in favor of large mining companies, both national and transnational corporations, to the detriment of the fundamental rights of Mexicans,” according to the statement of purpose.

Indeed, lithium has become one of the world’s most crucial metals, particularly due to its use in batteries that now power electric vehicles (EVs). As the world increasingly shifts toward clean-energy solutions, requirements for batteries, solar panels and emergency-power supplies have further bolstered global demand for the silvery-white metal. This goes a long way towards explaining its roughly 70-percent price surge in 2022 thus far, underlining just how valuable lithium is now proving to the world. And with demand for EVs only set to accelerate further over the coming years, lithium will become one of the world’s most highly sought-after raw materials.

As such, the future looks bright for Mexico. “I am very happy because lithium was nationalized, which is a strategic mineral,” AMLO declared. “I want to extend my thanks to the legislators, deputies, senators, who supported the mining reform so that lithium could become the property of the nation, and no foreign country, company, or corporation could appropriate what belongs to the people of Mexico.”

According to the U.S. Geological Survey (USGS), the country has 1.7 million tons of lithium mining reserves, placing it in 10thposition in the world. Commercial production of the highly sought-after metal has not yet been achieved, however. The Mexican Association of Mining Engineers, Metallurgists and Geologists recently stated that “clays containing lithium have been located” in the country, although it also acknowledged that “no country has produced and commercialised lithium from clays”. There is also one commercial mine in Mexico in the northern state of Sonora, which was slated to commence with an estimated production of 35,000 tonnes per year from 2023 onwards. But with the mine being operated by the Chinese lithium giant (Jiangxi) Ganfeng Lithium at present, discussions will be necessary to determine its future ownership. “These contracts have to be reviewed,” was AMLO’s recent response to this issue.

“We are going to protect our lithium, the lithium of Mexico, the lithium of our generation and of future generations, of our children and our grandchildren,” AMLO told a press conference. “I make a respectful call to the legislators so that… we protect lithium and lay out the structure for a company, like [state-owned power company] CFE [Comisión Federal de Electricidad], that will handle everything related to lithium, backed by the support of research facilities in the country and the experience learned from other countries.”

But not everyone is convinced that the new law is viable. “Lithium cannot be reserved as a strategic mineral exclusively for the state if this particular sector was not already embodied in the treaty as a specific reserve. And it is not,” Kenneth Smith Ramos, former chief negotiator for the North American Free Trade Agreement (NAFTA) with the US and Canada, noted earlier in the year. According to Smith Ramos, Mexico’s nationalisation efforts could violate the terms of the region’s new trade deal, the United States–Mexico–Canada Agreement (USMCA), which is the successor to NAFTA. “If they approve the mining law that prohibits concessions for the extraction of #litio Mexico would be violating #TMEC [USMCA] and the other Free Trade Agreements that it has signed. Bad occurrences have huge costs,” he then tweeted on April 18.

Opposition forces to AMLO’s government have also criticised the drive for nationalisation, with legislators from the National Action Party (PAN) and Institutional Revolutionary Party (PRI) voicing concern that it would subdue the rate of development of lithium mining and highlighting that the Mexican government has neither the experience, resources nor technical know-how to achieve commercial production.

“When it comes to lithium chemicals, the process from identifying a deposit to bringing that deposit into commercial production is lengthy, expensive and not straightforward,” Emily Hersh, chief executive of Nevada-based Luna Lithium and a specialist in mining in Latin America, explained to the Financial Times. “The government is nationalising an industry that is not generating cash flow in any way, and the first project in this industry is still many years out from producing anything of tangible economic value. It’s a low economic loss, but a high political gain.” As such, the minority seemingly continues to favour external private investment in developing Mexico’s lithium capabilities.

AMLO has responded by confirming that all mining concessions will be analysed in accordance with the law. ​​​​​​”I have been reading comments saying, ‘Why are we going to have lithium if we lack the technology?’ It might be, but we are going to develop the technology, or we will acquire it,” he added, whilst rebuking those opposition lawmakers who “thought by blocking the constitutional reform that it was resolved—no, no, no”. The president has also claimed that foreign investors “had their eyes on an asset of the nation”, while his supporters have branded opposition lawmakers as “traitors”.

Lawmakers have additionally argued that the move violates the USMCA and would thus ignite trade tensions in the region, a concern that seems to be shared by some in Washington. On January 19, US senators sent a letter to President Joe Biden detailing their concerns over the possible nationalisation of lithium and other strategic minerals. According to the letter, legislation that prohibited mining concessions of copper and lithium was deemed “detrimental” to the Biden Administration and in direct violation of the USMCA.

Such opposition raises concerns over the future of the AMLO government, especially given the notoriously hostile geopolitical reaction to resource nationalisation in the region and even beyond. Indeed, a number of regimes seeking to bring their resource wealth under state control have been duly toppled through various covert actions, many of which have been considered nothing short of coup d’états.

For instance, many believe the ouster of (Juan) Evo Morales in Bolivia in a military coup following the 2019 presidential election was primarily executed on the grounds of the former government’s decision to nationalise its vast lithium reserves. “There were statements by vice-presidential candidate Samuel Doria Medina who mentioned it would be very interesting if Tesla could come to Bolivia to industrialize lithium. A few weeks later, a statement by a senior Tesla manager was known on social networks saying that they are going to carry out a coup where necessary,” current Bolivian President Luis Arce (Luis Alberto Arce Catacora) stated in March 2021 when he visited AMLO to commemorate 190 years of diplomatic agreements. “The people of Bolivia and the people of Mexico are brother nations, we belong to our America, and we have the same purpose of justice and freedom to banish classism, racism, to assert equality, and to reaffirm our sovereignty.”

Given the close relationship between the two Latin American nations and their similar abundances of lithium deposits, does the same fate await AMLO as Morales’s? It would certainly appear that he is just as popular within his own country as Morales was in Bolivia. While Mexico’s recent recall referendum on April 10 saw only 18 percent of its electorate turn out to vote, more than 90 percent of those who did cast their ballots voted in favour of AMLO completing his six-year term.

Latin America is home to a substantial proportion—around two-thirds—of the world’s proven lithium reserves, with Bolivia, Chile and Argentina representing the bulk of the reserves in the region, and Peru and Mexico to a lesser extent. Indeed, recent reports confirm that the four countries are working to create a lithium association for better sharing of lithium expertise within the region. “We’re going to work. We’re already doing so together on development, on exploration, processing, new technologies,” AMLO told a news conference in early May.

In Chile, the newly elected centre-left president, Gabriel Boric (Font), has promised to create a state lithium company. “Lithium is the mineral of the future,” Boric declared, maintaining that the country “cannot make the historic mistake of privatising resources again.” And reports emerged in late 2021 that Alberto (Ángel) Fernández’s government in Argentina was considering a bill that would seek to create a public company for lithium production that could resemble the structure of its state oil company, YPF.

Mexico can also take heart from the fact that it managed to nationalise its oil company back in 1938. Much work still lies ahead, however, with commercial lithium production remaining some way off from becoming a reality. Nonetheless, Mexico’s move to nationalise lithium and desire to partner with neighbouring lithium producers could well set off a chain reaction in the region that will change the economic and geopolitical power balance in Latin America for some time to come.