Top Posts
Challenges Remain, But There Are Opportunities to Be Had in...
Interview with Mr. Olukayode Pitan, Chief Executive Officer and Managing...
Commodities Outlook for 2023
The Value of Cash in a Time of Crisis: How...
The US-Africa Leaders Summit: Fostering a Closer Relationship with the...
Three Key Sectors in Which to Invest in 2023
Home Brokerage New Oil and Gas Discoveries Set to Fundamentally Transform the Economies of Guyana, Suriname and the Wider Caribbean Region
Brokerage

New Oil and Gas Discoveries Set to Fundamentally Transform the Economies of Guyana, Suriname and the Wider Caribbean Region 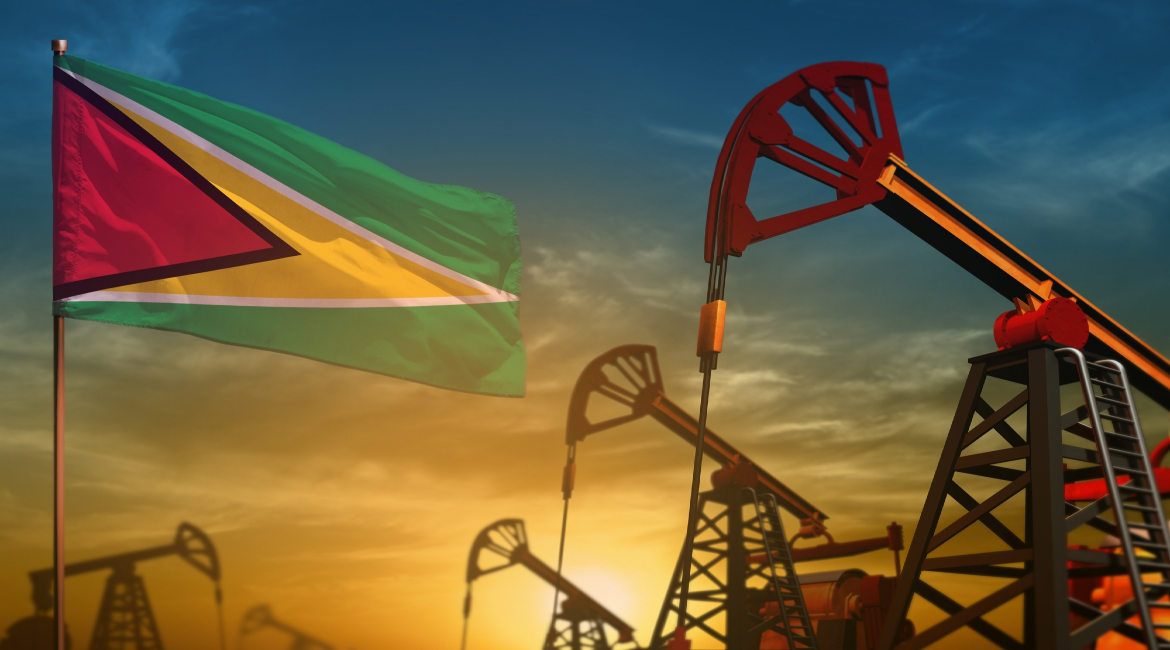 On January 20, reports emerged that the Caribbean nation of Guyana had officially exported its first-ever shipment of crude oil. The one million barrels of sweet crude that were sent to the United States had been produced at the Stabroek Block’s Liza oil field, which thanks to operator ExxonMobil had made history in December by producing the first crude oil in Guyana’s history.

The achievement of producing oil in Guyana—a diminutive country that, while located in South America, is identified as part of the Caribbean—marks the culmination of more than a decade of work in Guyana by ExxonMobil. It was back in 2008 that the US oil major’s subsidiary Esso Exploration & Production began exploring the country’s offshore territory before it struck black gold seven years later when it discovered substantial hydrocarbon reserves in the Liza-1 well.

According to the company itself, production from the first phase of the Liza field should reach full capacity of 120,000 barrels of oil per day (bpd) during the next few months. What’s more, the Exxon-led group, which also involves US oil-company Hess and China’s CNOOC (China National Offshore Oil Corporation), is now well underway towards developing Liza Phase 2, with a start-up date scheduled for mid-2022 and production expected to reach 220,000 bpd. Stabroek’s third development at Payara will then come online in 2023.

And it’s not just ExxonMobil that has a presence in the area. Other leading oil companies, such as France’s Total and the United Kingdom’s Tullow Oil, are also actively exploring the country’s offshore fields, with Tullow’s activity being estimated to return about 200 million barrels in recoverable reserves. Indeed, thanks to 15 massive offshore discoveries over the last five years or so with an estimated recovery volume totalling more than five billion barrels of oil equivalent (BOE), Guyana is now on course to reach production levels of 750,000 bpd within the next five years.

Guyana’s oil boom comes at a time when the surrounding geographical region is experiencing similarly transformational oil-and-gas exploration and production activity. January was also a momentous month for Guyana’s next-door neighbour, Suriname, when on the seventh of the month, Apache Corp. and French oil-major Total announced the discovery of significant offshore oil reserves, thus marking the first for the Dutch-speaking country after several years of exploration. The Maka Central-1 well on the 1.4-million-acre Block 58 is located next to Guyana’s Stabroek Block, which strongly implies that substantial quantities of oil will be extractable.

And in Trinidad and Tobago, a thriving oil-and-gas industry, which has already allowed the Caribbean nation to build a strong manufacturing sector, is set for further significant gains. In particular, the island country is a major exporter of liquefied natural gas (LNG), with an estimated 24 billion cubic metres (850 billion cubic feet) of gas located within its maritime area. Offshore output has been declining in recent years, however, but the island nation is now looking to Venezuela’s relatively pristine offshore gas reserves as supply for its LNG plants—thanks to the 2007 Framework Treaty between the two nations, which addresses the unitisation of hydrocarbon reservoirs that extend across the delimitation line between the countries—and at how cross-border reservoirs could be exploited.

According to Trinidad and Tobago’s prime minister, Keith Rowley, gas production from the Manatee field, which is part of the 283-billion-cubic-metre (10.04-trillion-cubic-foot) Loran-Manatee shallow-water natural-gas field straddling both countries, could begin by 2024 at rates of between 7 and 11 million cubic metres (270 to 400 million standard cubic feet) per day. The field, according to Rowley, represents a landmark in the two countries’ cross-border relationship, as it is likely to have favourable implications for the development of additional cross-border fields—including the Manakin-Cocuina and the Kapok-Dorado, which together are estimated to have a sizeable 850 billion cubic feet of natural gas within the Trinidad and Tobago maritime area. “The achievement of this agreement is a reflection of positive initiatives being undertaken by government to meet domestic gas requirements for competitive energy, and our retention of a place in the petrochemical and LNG business for some considerable time to come,” Rowley recently asserted.

But the development of the unitised Loran-Manatee field is being hampered by US sanctions that prevent American companies from doing business with Venezuelan state oil company PDVSA (Petróleos de Venezuela, S.A.). “This impacts on the ability of US company, Chevron, which has a 60 percent interest in the Loran field, to participate in the development of the Loran-Manatee Field,” Rowley explained. Rather than undertaking a joint venture, therefore, the two governments “have agreed to the independent development by each government of the field within the Loran-Manatee cross-border that falls within its marine area”.

But the prime minister is also optimistic about the aforementioned oil finds in neighbouring Guyana, which he believes will radically change the perception of the region. Indeed, Trinidad has entered into the Memoranda of Co-operation with Guyana, Grenada and Barbados to provide technical assistance, while Rowley disclosed that initial discussions have started regarding the development of unitisation agreements to support the exploration of reservoirs that cross their maritime borders.

With such substantial opportunities lying in wait for the likes of Guyana, Suriname and Trinidad and Tobago, the economy of the wider Caribbean region as a whole could see some astronomical gains during the coming years. The colossal numbers associated with Guyana’s oil discoveries are especially mouth-watering, with rising production over the next two to three years set to be wholly transformational for its economy. A country of only 780,000 people, Guyana is set to jump into the world’s top 10 oil producers on a per-capita basis; and even at a conservative barrel price of $50, that could translate into revenues of close to $15 billion per year for the former British colony.

It’s perhaps not surprising, then, that the International Monetary Fund (IMF) predicted in November that Guyana’s economy will explode this year, expanding by 86 percent compared to just 4.4 percent in 2019. That would be 14 times the projected pace of China and would mean that its $4-billion annual gross domestic product will swell to $15 billion by 2024. That said, the IMF does acknowledge that even slight changes in the country’s oil output and/or price will result in considerable revisions to that projection.

Already the government has initiated a $300-million-per-year revenue deal from profit-sharing agreements and royalties with the participating oil companies, and this will jump higher as more offshore wells come online. And the proceeds will be invested into a newly established sovereign-wealth fund that has been designed for “inter-generational” savings, as well as to protect against oil-price volatility and the funding of future development. “We’re moving from a very low base to a stratospheric leap,” Finance Minister Winston Jordan told Bloomberg.

Even in terms of employment, the Guyanese people will have many opportunities over the coming years. ExxonMobil has already confirmed that around 1,700 of its employees and other workers supporting its activities in the country are Guyanese, representing more than half of the total workforce. “This number will continue to grow as additional operations progress. ExxonMobil and its direct contractors have spent approximately $180 million with more than 630 local suppliers since the first discovery in 2015,” the company stated.

Arguably the biggest concerns at this stage are whether the likes of Guyana and Suriname will be able to cope with this new influx of mineral wealth and whether their respective societies and environments will ultimately reap the benefits. It will not be easy, if history is any judge. With a relative scarcity of adequate infrastructure in these countries; with Guyana already in the midst of a period of deep political unrest after the government of President David Granger was ousted in December following a vote of no confidence; and with Suriname currently under the rule of Desi Bouterse, a convicted drug smuggler with a seriously alarming past human-rights record, the potential for corruption, conflict, authoritarianism and overall mismanagement of oil revenues is not insignificant.

“There is no way the explosion of money will be managed properly,” claimed Amy Myers Jaffe, director of energy security at the Council on Foreign Relations. ”Here you take this poverty-stricken country and make them Qatar in three years.”

But at the very least, these recent oil and gas finds will help to bolster the Caribbean’s economic ambitions, which in turn should transform the global perception of the region. As Trinidad Prime Minister Rowley recently observed, the Caribbean is “being heralded as the next major oil and gas province”. For a region that has long been associated with its seemingly disparate countries driven by tourism, agriculture and offshore financial services, the transformational economic opportunities presented by these new mineral discoveries cannot be underestimated.

How Financial Services Can Win the War for Technology Talent