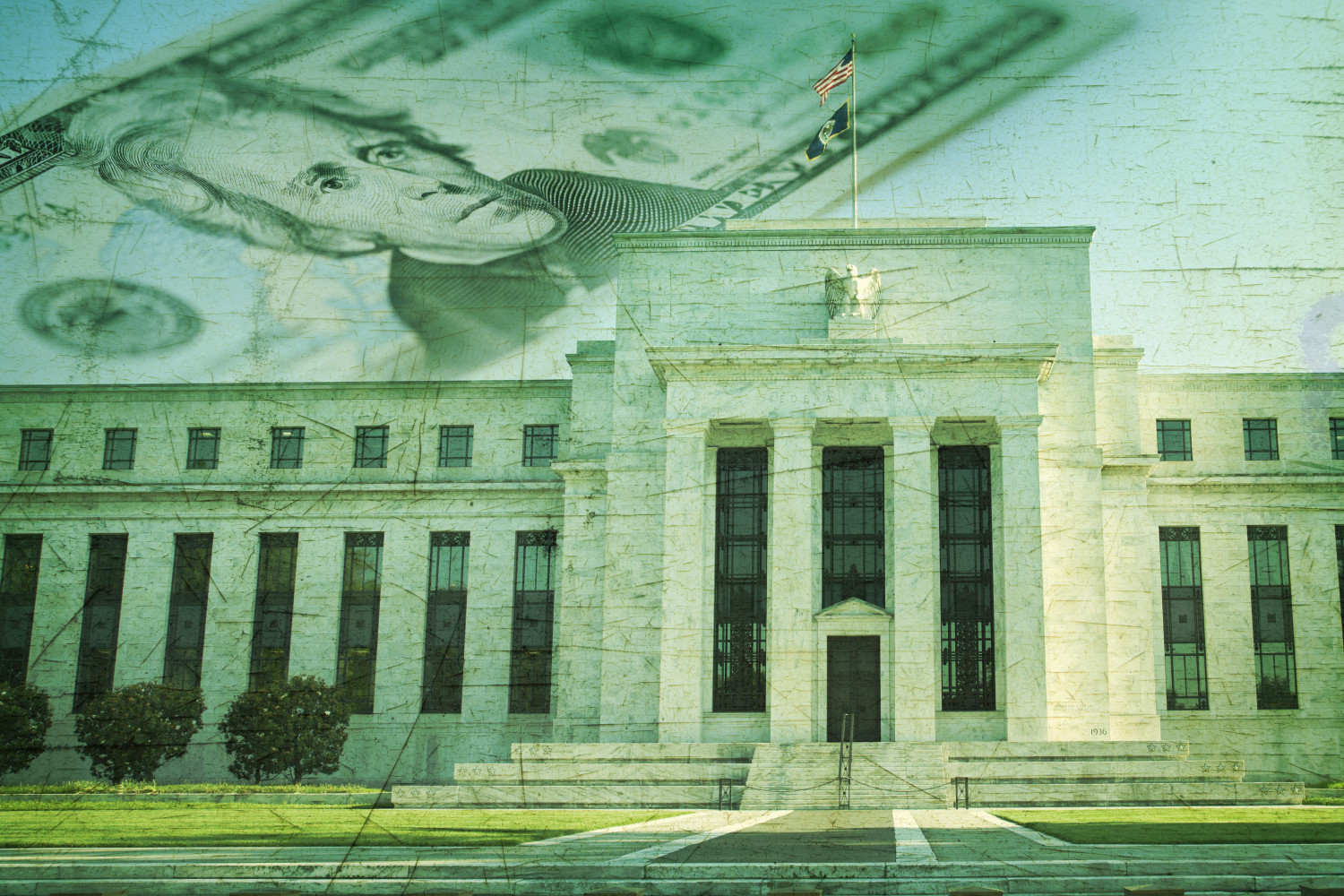 By Phil Flynn, Senior Market Analyst, The PRICE Futures Group, and author of The Energy Report

There is an almost dogmatic belief that the price of oil and the dollar have an inverse relationship. While in recent years, the dollar/oil inverse correlation has been very tight, throughout history that has not always been the case. In fact in the oil market and that of other commodities, we may be on the verge of a total breakdown of that strong inverse relationship. The reason for that breakdown is the same reason commodities became so highly correlated to the dollar in the first place; it was the impact of quantitative easing (QE). 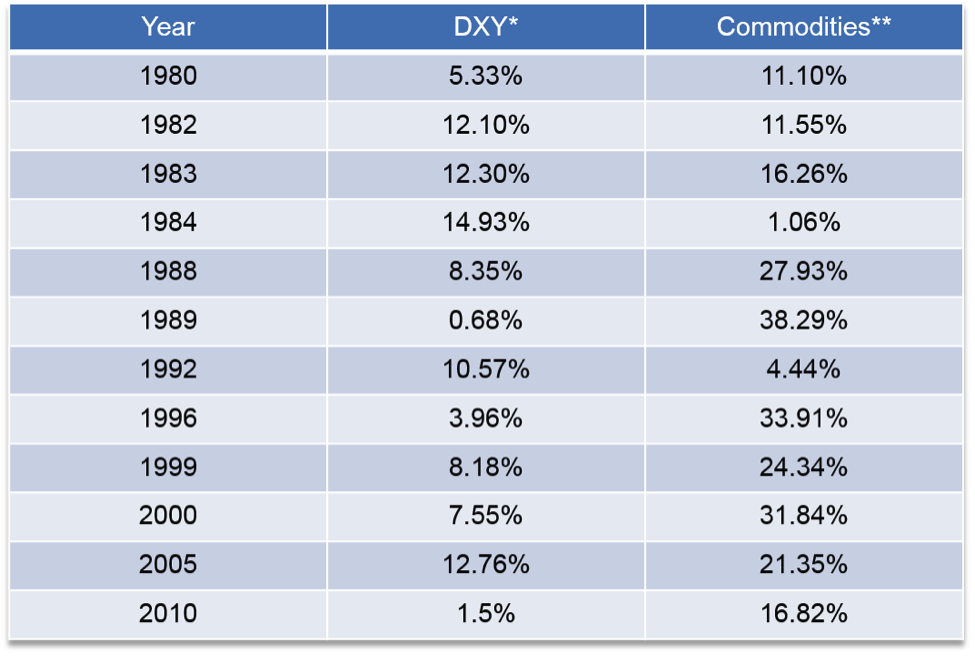 **Commodities are represented by the S&P GSCI TR from January 1970 to July 1998 and the Bloomberg Commodity Index TR from August 1998 through September 2014.

When commodity demand is strong domestically, or even internationally, the exchange rate doesn’t matter. Currency will chase the product regardless of the cost of the currency. While the dollar has some impact on the price of oil and other commodities, as commodities are priced in dollars, it is far from the only factor.

The value of the dollar had more influence on oil prices when, in the 1990s, the US had to import almost 60 percent of its petroleum. Now US net imports account for only 27 percent of the petroleum consumed in the country, the lowest annual average since 1985. That drop in imports makes the price less sensitive to currency market fluctuations.

The European Central Bank conducted a study and found that the US dollar and the crude oil market had a strong negative correlation. That correlation became clear early on in the year 2000. Yet prior to the year 2000, “there was no such systematic correlation over the previous three decades”.

The oil-to-dollar correlation hit its zenith at the start of the financial crisis, when in 2008-09 it ran near 60 percent. The reason for the high correlation was the strength or weakness of currencies, which was reflecting a shifting of risk assets trying to find a safe haven against what was an unfolding economic crisis.

Oil had been in a historic bull market. Not only was the US economy expanding due to low oil prices, those same low oil prices helped drive the explosive industrial revolution in China as well as the growing strength of the European Union. Oil prices saw a low of $16.70 that then went on to peak at $147.27 a barrel in the heat of the commodity-buying frenzy at the height of the economic crisis in 2008.

While most of the early price movement was driven by supply and demand, a massive surge of more than $97.00 a barrel from the lows in 2007 to the high in 2008 really was caused by panic and risk aversion as the wheels started to come off the global economy.

Many misunderstood that price move. Some said the rally came because the world had hit peak oil production. The theory was that as demand grew and we produced more oil, the maximum rate of extraction of petroleum would be reached, and the rate of production would then enter terminal decline.

In 2007 there was talk of oil shortages, and in a book titled Twilight in the Desert by the late Matt Simmons fears were raised that oil fields in Saudi Arabia, the world’s largest oil producer, had entered decline.

Oil man T. Boone Pickens said that oil production had already peaked when production hit more than 84 million barrels per day. Pickens said that global production could not sustain more than 84 million barrels a day because the largest oil fields in the world were declining. “It’s a treadmill that you just can’t keep up with,” Pickens said. “If I’m right, we’re already at the peak, the price will have to go up.” That was before the enormity of the shale oil revolution became clear to him and many others. Prices did go up, but the reason was not peak oil but something almost as ominous.

The real run on oil started in 2007 when Federal Reserve Chairman Ben Bernanke started to realize the depth of the financial crisis. In August 2007, the Federal Open Market Committee’s (FOMC’s) target for the federal funds rate was 5.25 percent, and as the economy started to deteriorate, the Federal Reserve started to lower interest rates even as Europe continued to raise them. This caused the dollar to severely decline, and the massive buying of oil and other commodity assets began to act as a hedge from the falling dollar’s value.

Buying in the oil market also came as traders thought the world supply of oil would tighten dramatically. Even big banks such as Goldman Sachs were predicting that due to the unending strength in energy demand from China and Europe, the world would see oil as high as $200 a barrel, despite problems in the US sub-prime market.

Many believed that global economies had “decoupled” from the US economy and that our problems here would not hurt demand growth even if the US mortgage crisis slowed US growth.

The Lehman Brothers’ bankruptcy stopped the world in 2008, and the truth about what drove oil became apparent. It was not “peak oil production” but a bubble created by money moving around the globe trying to find a safe haven from falling interest rates and the collapse of the US dollar. Oil prices tanked and demand for oil plummeted, falling more than 2.0 million barrels a day in an instant, as credit and the global economy froze.

On November 25, 2008, the Federal Reserve attempted to mend the economy by announcing they were moving toward quantitative easing. This raised the correlation of the price of oil to the dollar to the point at which their movements were utterly dependent on each other. They literally moved in lock step. Money printing by the Federal Reserve was the only demand growth hope that oil had going for it. On December 16, 2008, the program was formally launched after the oil market, in that month, hit a low of $32.40 per barrel.

Then came the era of risk-on and risk-off. As economic hopes brightened, traders on “risk-on” days would buy euros, buy commodities and sell the dollar. On “risk-off” days, they would do the opposite. Investment money was trading scared. Money was beginning to take small steps back into the market and then would pull back until traders eventually got used to the cold economic waters. The price of oil moved in tight constraints. It was up on risk-on days and down on risk-off days as it became clear that Federal Reserve actions and subsequent simulative actions by other central banks were all that prices and demand had going for them. Oil would ride the QE risk-on/risk-off move all the way back up to $114.83 a barrel in May 2011.

At present day, the Fed is looking to raise interest rates as the rest of the world continues going in the opposite direction. This is almost the exact opposite of the beginning of the financial crisis when the Fed started to lower rates while Europe was raising them. We now have 63 percent of the global central banks raising interest rates as the Fed in the US is signaling they are about to begin raising them. This has caused the US dollar to go to a 13-year high and crude oil to fall back to its lowest levels since the beginning when the Federal Reserve first moved to quantitative easing. While the move in oil is predictable, from an exchange rate perspective, we have to ask: will it be sustainable?

Because even though in the short run the dollar is weighing the price of crude oil, the fact that the Fed is normalizing rates should mean that the US economy is finally starting to heal and will bode well for energy demand. Even for the economies that are struggling, we should still see demand for crude oil grow as more QE and lower interest rates in those economies will increase demand as well. If demand starts to spark, the price of oil will break away from its US dollar value related change as the current glut of oil will start to dry up.

The glut of crude oil will dry up not only because demand will improve, but also because the recent price decline caused a massive pullback in energy investment, and this will eventually take a toll on production. US output will fall later this year just as global demand starts to improve. This then will start an oil demand price run-up that should take the price of crude oil back towards the $80-per-barrel area. This all assumes, of course, that the turmoil in Greece doesn’t drag Europe into a recession. Oil will find its own way despite the dollar even after the Fed starts to raise rates.

An investment in commodities, managed futures or other alternative investments including any fund or separate account is speculative, involves a high degree of risk and is suitable only for persons who are able to assume the risk of losing their entire investment. This article does not constitute an offer to sell, or a solicitation of an offer to buy, any interest in such a product. Prospective investors are expected to be aware of the substantial risks of investing in the highly speculative field of commodities and futures trading. Those who are not generally familiar with such risks are not suitable investors and should not consider investing in commodities, managed futures or other alternative investments. No one should consider or recommend an investment in any investment vehicle prior to a complete and thorough review of the applicable documentation required, including the sections on risk and expenses associated with such an investment. Past performance is not necessarily indicative of future results.

Go to top
ABOUT THE AUTHOR
Phil Flynn is senior energy analyst at The PRICE Futures Group and a Fox Business Network contributor. He is one of the world’s leading market analysts, providing individual investors, professional traders, and institutions with up-to-the-minute investment and risk management insight into global petroleum, gasoline, and energy markets. His precise and timely forecasts have come to be in great demand by industry and media worldwide and his impressive career goes back almost three decades, gaining attention with his market calls and energetic personality as writer of The Energy Report. You can contact Phil by phone at (888) 264-5665 or by email at pflynn@pricegroup.com. Learn even more on our website at www.pricegroup.com.
0 comment 0 FacebookTwitterPinterestEmail
previous post

The Banking Outlook for Vietnam

The Future of Payments: faster, smarter and mobile