Top Posts
Global Military Spending Hits a Record High
Could Big Tech’s Iron Grip on Digital Advertising Soon Come...
Can Recent Oil Discoveries Prove to be a Boon for...
Is It Time to Explore an Alternative to Fractional-Reserve Banking?
Can AgTech Prove Instrumental in Helping to Feed the World’s...
Can the Indo-Pacific Economic Framework Expand US Economic Influence in...
Home Brokerage Recent Trends in Renewable-Energy Investment
Brokerage 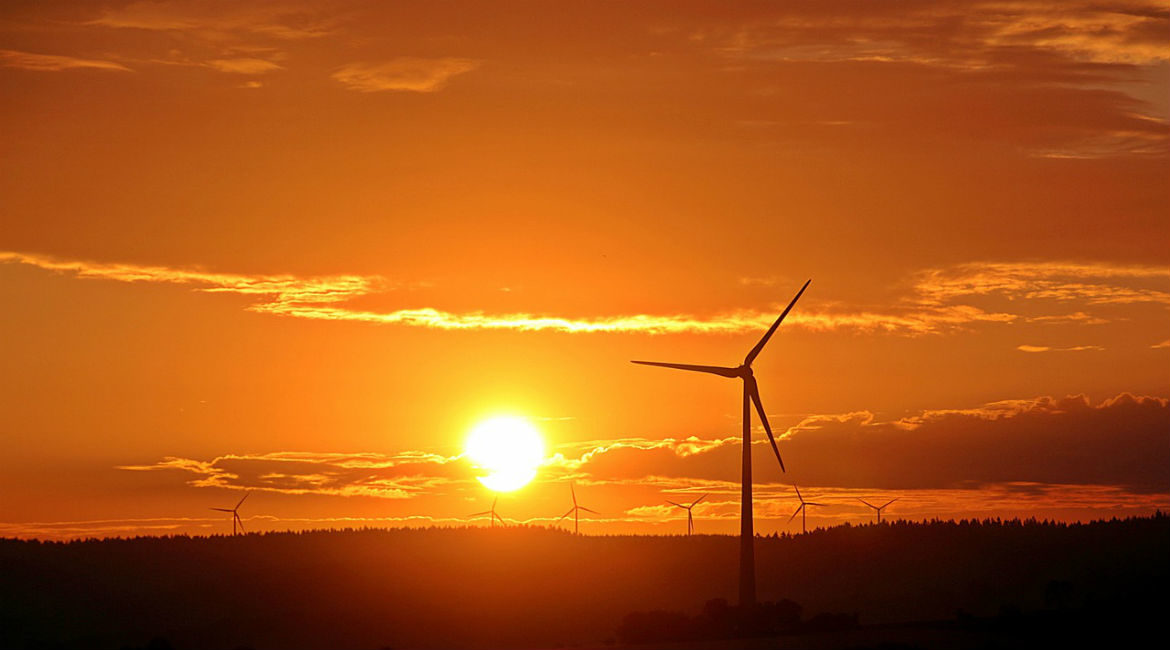 2015 is likely to go down as the finest year on record for the renewable-energy industry. The year ended with nearly 200 countries signing up to the 17 goals of the 2030 Agenda for Sustainable Development and the Paris (climate change) Agreement, a landmark deal in which targets were set to reduce harmful carbon emissions, ultimately to zero in the second half of the century; this means that the world will have to lower its reliance on fossil fuels and thus advance the development of clean, renewable energy such as solar, wind and hydro power.

As such, the Paris Agreement has been a significant milestone in the world’s ongoing shift towards renewable-energy utilisation, and was an appropriate way to end a year in which the industry welcomed an all-time record level of global investment of $348.5 billion, with China leading the way: 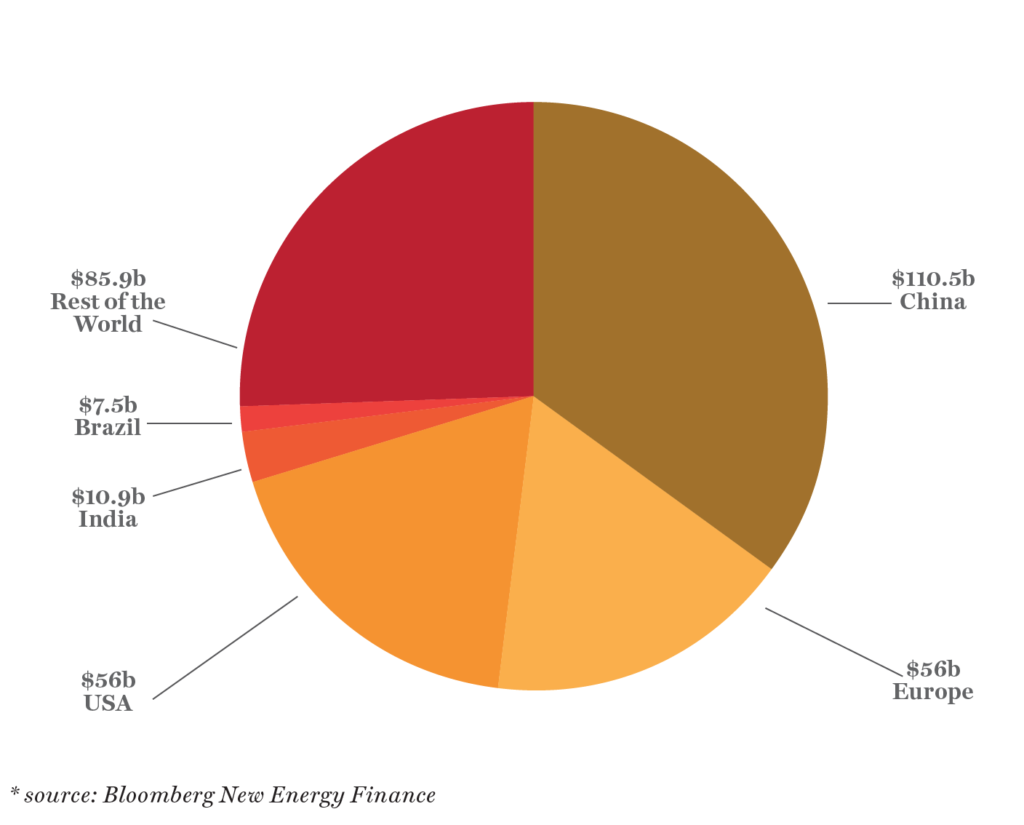 This amount easily surpassed the previous record of $278.50 billion, achieved in 2011. Overall, it was also more than double the amount allocated to new coal and gas generation, although given the huge existing capacity of conventional power generation, clean technologies still managed to account for only about 10 percent of global electricity generation. Perhaps the most notable component of last year’s stellar growth, however, was the amount of generating capacity that was added in the wind and solar segments, which hit 118 gigawatts, and was clearly higher than the next highest figure of 94 gigawatts attained in 2014.

In contrast, however, the first half of 2016 has been a different story so far. Investment in clean energy has not quite hit the highs seen last year, with the total amount during the six-month period being 23 percent lower than the same period a year ago, according to London-based researcher Bloomberg New Energy Finance (BNEF): 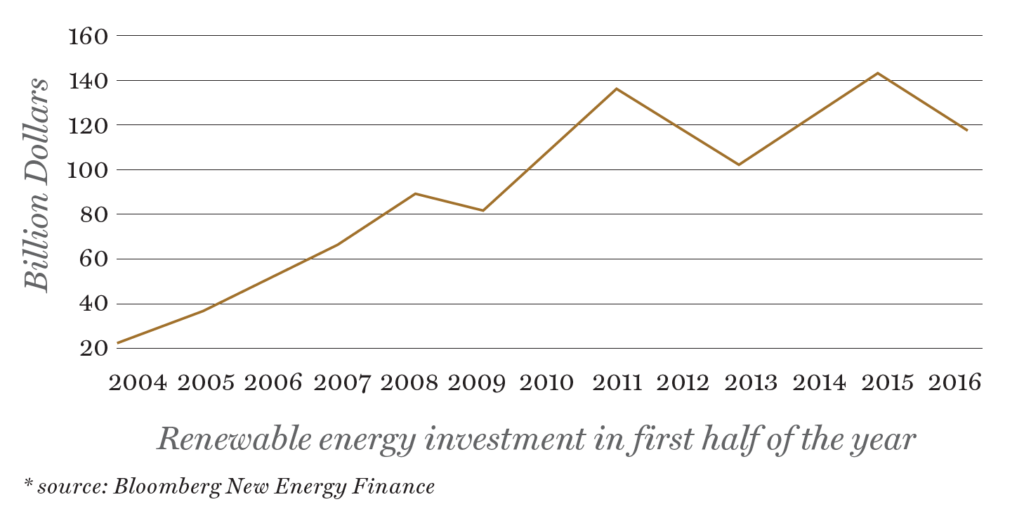 2016’s second quarter saw investment reach $61 billion, a historically respectable amount for a three-month period and a solid 12 percent above the first quarter; but it was still 32 percent below the $90 billion posted in the same quarter in 2015.

For the first six months, moreover, the only regions to witness an investment increase were Europe with a 4-percent rise to $33.5 billion, and Brazil with a solid 36-percent gain to $3.7 billion. All remaining regions experienced slides compared to last year: China lost 34 percent to hit $33.7 billion, India was down by 1 percent to $3.8 billion, the rest of Asia-Pacific fell by 47 percent to reach $12.1 billion, while the Middle East and Africa contracted by 46 percent to record $4.2 billion. The US, meanwhile, lost 5 percent to post $23.1 billion, and the Americas excluding the US and Brazil was down by a massive 63 percent to register $2.3 billion.

Renewable energy’s comparatively poor showing this year has been principally attributed to China, whose financing of solar and wind projects in particular received a significant upward revision for last year, which in turn has created a “hangover” this year in the face of weaker electricity demand, according to Michael Liebreich, chairman of the advisory board at BNEF. Significant changes in the solar market have also been held responsible for the lower global investment rates this year to date. Photovoltaic-panel manufacture and solar-project construction have become steadily cheaper in several countries, while there has also been a distinct shift from more expensive (per megawatt) small-scale projects to utility-scale projects.

Liebreich believes that “it is now looking almost certain that the global investment total for this year will fail to match 2015’s runaway record”. However, many believe that the 2016’s underperformance is somewhat of a blip, and that the general trajectory for renewable-energy investment will be decisively upwards in the months and years to come. Given the agreements now in place by countries across the world, the continued switch away from “dirty” energy sources and towards renewable energy seems inevitable. The more favourable shift towards renewable energy in the political sphere, in particular, is widely thought to be pivotal in encouraging higher levels of investment in renewable-energy stocks going forward.

Indeed, the stated commitments made by specific countries to increase their exposure to clean energy certainly underline this global transition. For instance, there are few in the world doing more to encourage growth in renewable energy than South Korea. The East Asian country’s government has promised to invest 42 trillion won ($36.6 billion) into renewable energy between now and 2020, as well as relax the regulations over the sale of solar energy generated by distributed systems. The investment will go directly into renewable-energy infrastructure, innovation and capacity expansions. $28.8 billion will be invested directly in the renewables sector, $3.9 billion in energy storage, $2.2 billion in smart metering, and $1.7 billion will be set aside to develop environmentally friendly power. The government also plans to build renewable power plants worth 13 gigawatts of capacity.

Furthermore, a recent report commissioned by HSBC and compiled by the Climate Bonds Initiative concludes that the size of the market for green bonds—that is, bonds that are created to fund environmentally beneficial projects—is being substantially underestimated at present. According to the research, $118 billion of securities are officially labelled as green bonds. However, the total market for “climate-aligned” investments designed to curtail pollution and climate change reportedly amounts to $576 billion. The majority of investments failed to receive classification as green bonds, because there is no officially agreed-upon standard in finance to determine what is officially “green”. In response, therefore, the Climate Bonds Initiative is designing voluntary principles for the industry.

Banks are also looking to ride the renewables wave, with Goldman Sachs announcing late last year that it will triple its allocations for clean-energy finance to $150 billion over the next 10 years, and with Citigroup and Bank of America pledging $100 billion and $125 billion respectively. With such financial heavyweights looking to substantially expand their presence in renewable energy, it would appear that this is one industry that has a bright future ahead of it.

Heard of ‘tech-local’? It’s going to be your future bank branch