Top Posts
Why the Status of the Fifth-Largest Economy Is a Job...
Syrian Economic Outlook Dims as Internal Conflict, Resource Theft and...
Unwinding the Unconventional Monetary Policy in Japan
Three Significant Payment Trends in 2022
Recessions Hurt: Does the Data Show That the World’s Major...
Every Organisation Should Be Aware of Invoice Scams
Home Brokerage Relationship between the yield curve and previous peaks in the business cycle
Brokerage 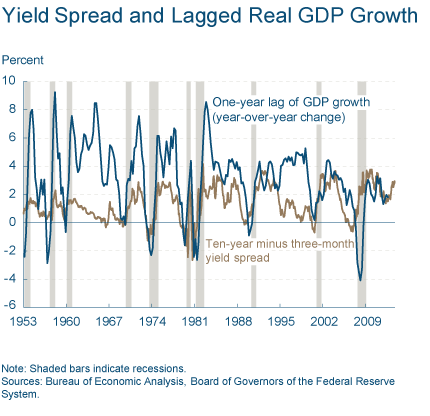 The yield curve is one of the most reliable economic indicators and one that savvy market watchers always keep on their radar. Most economic data is backwards looking, and the bulk of economic forecasts are based on such backwards looking data. It is no wonder that the track record of forecasters is abysmal. Instead, a better forecast is generated from actually looking at what investors are doing with their money, rather than what they think or what they say. Enter the yield curve.

Most famously, the yield curve is used by central bank policymakers as a guide to the market’s expectations for the future of rates and growth, thus in some ways there is a reflexive relationship. The yield curve’s foresight is used as a crutch by policymakers to adjust or determine policy, which the very same yield curve serves to anticipate. This is somewhat confusing, but it only validates the utility of this tool to position the portfolio.

Below is a chart of the yield curve vs GDP growth one year later, showing the accuracy of this measure:

At this point in time, it is interesting to consider how the yield curve behaved at previous peaks in the business cycle. This question is germane today as global markets have just passed the March 9, 2009 5-year anniversary of the bottom of this bull market. Since then, both stocks and bonds have embarked on impressive moves with tremendous gains for those properly positioned. Some of the catalysts for the bull market are a resumption of economic activity, strong rebound in housing, aggressive interventions by central banks to lower interest rates and the resilience of the consumer with spending rising to new record levels.

This relationship is quite obvious in the chart above. The shaded bars are periods of recessions, and every single recession was preceded by the yield curve declining.  Sometimes, the yield curve flattened out and other times, it became inverted, meaning rates on 3 month treasuries were higher than rates on long term treasuries.

This unique dynamic reflects strong demand for longer term bonds which pushes long term rates lower. This tends to happen when investors expect economic growth to slow, inflation to come down, and thus interest rates to fall. Therefore, bond investors are eager to purchase long term bonds which thrive in such economic conditions.

The most recent example of this situation was in August 2006 which accurately predicted the devastating recession and negative growth of 2007-2009. Those who bought longer term bonds in mid 2006 despite getting lower interest rates than those in shorter term notes, were very well rewarded as the chart below shows. On the other hand, the chart also shows the fate of those who ignored the yield curve, and kept money in stocks, which thrive when growth is strong. 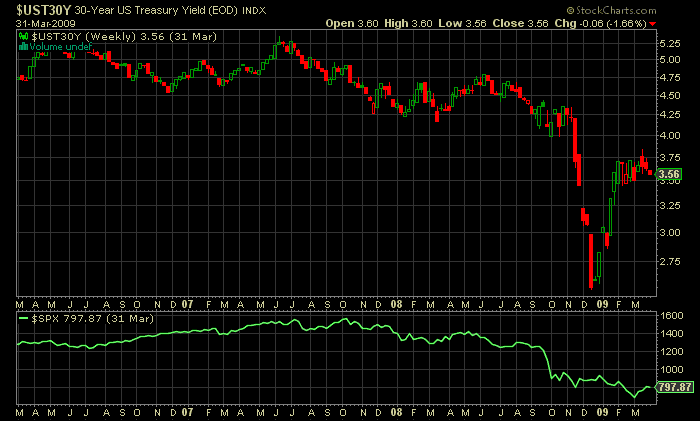 The chart above verifies the yield curve’s ability to sniff out inflection points in the business cycle, as in August 2007 the stock market was around 1500 just a couple of percentage points below its all time high at that point. It was also a good time to pick up bonds, as the yields fell by 50% during the recession.

In the previous recession during 2000-2001, the yield curve was also a useful tool to sidestep much of the carnage from the tech bubble: 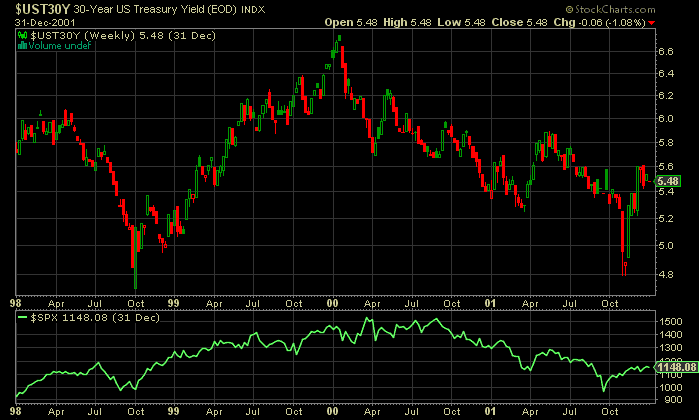 The yield curve became inverted in November 1998, and one year later the S&P 500 was at 1450 with the 30 year yield at 6.3%. And again, the yield curve served as an effective timing tool to exit strategies leveraged to growth and move into more conservative vehicles. The stock market kept inching higher for almost a year but then plunged almost 40% in the tech crash.

Take a look at the current structure of the yield curve: 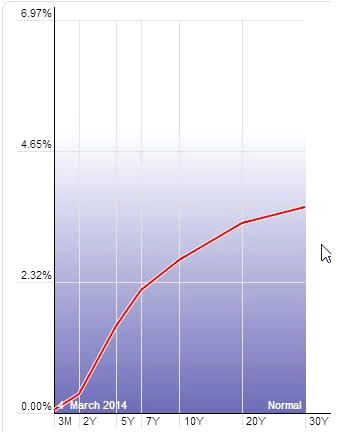 There is absolutely no signs of any flattening, let alone inversion. This suggests that bond investors continue to expect continued growth, and a peak in the business cycle is nowhere in sight. There have been many high profile economists and market watchers who have predicted an imminent demise to this bull market over the last couple of years. Each has been proven incorrect and missed out on opportunities in this bull market.

Compare that to the yield curve over the last 5 years, which did decline in 2012 reflecting fears of Spanish and Italian default, but remained far above levels that would be called flat let alone inverted. And in fact, the yield curve has been steepening over the last year, indicating expectations of an acceleration in growth. 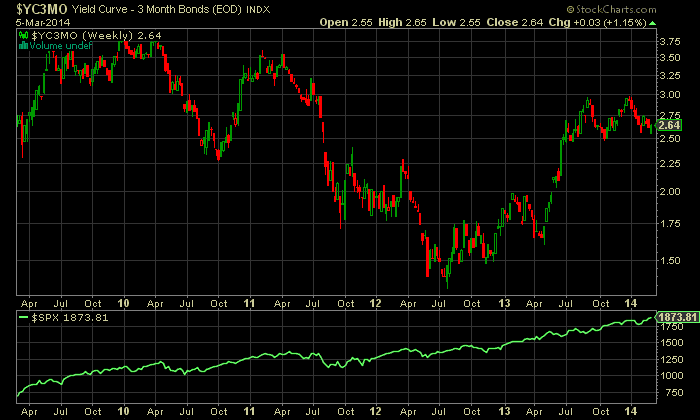 One point to emphasize is that the yield curve is an indicator derived from the actual buying and selling of bond investors. And bond investors are typically entities controlling billions if not trillions of dollars, so they have some of the best resources and information available. The yield curve gives a window into their thinking and combines the judgement of this group into an easy digestible picture.

Figuring out future rates of economic growth and inflation is worth millions, if not billions of dollars. It is what traders and investors are constantly trying to do all over the world. The yield curve is the best tool to answer these questions. Until it inverts, it is best to bet on continued economic expansion.

Chinese banking: the strengths and weaknesses