Top Posts
Challenges Remain, But There Are Opportunities to Be Had in...
Interview with Mr. Olukayode Pitan, Chief Executive Officer and Managing...
Commodities Outlook for 2023
The Value of Cash in a Time of Crisis: How...
The US-Africa Leaders Summit: Fostering a Closer Relationship with the...
Three Key Sectors in Which to Invest in 2023
Home Brokerage The Rise and Rise of Oil and Gas Sector Bankruptcies
Brokerage 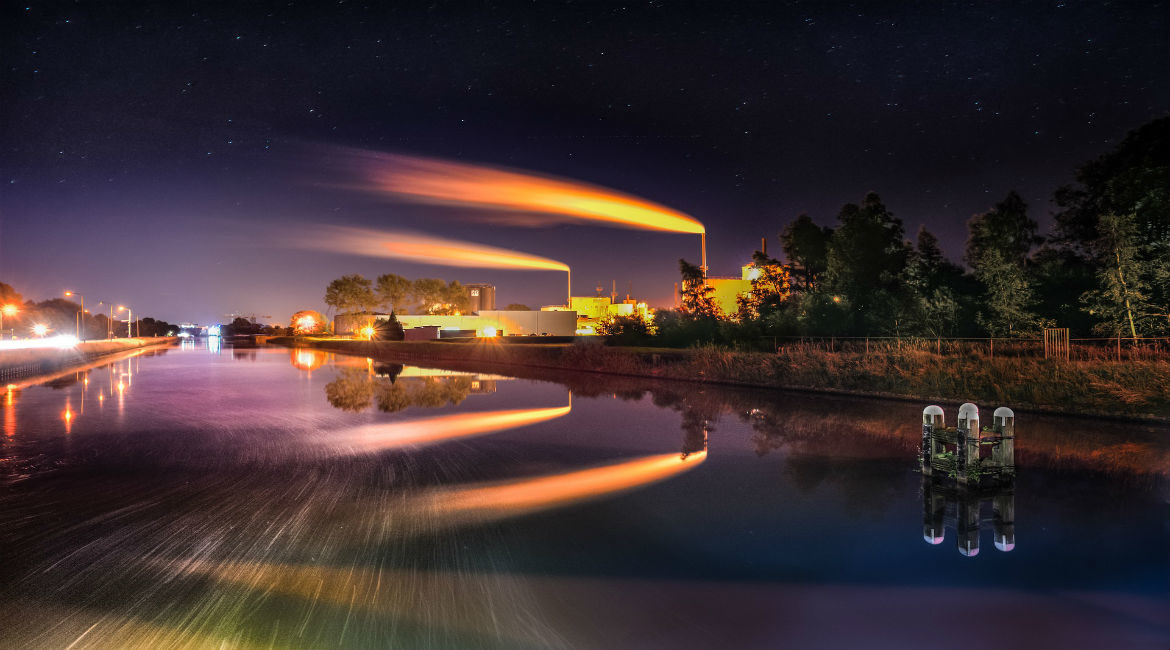 The 18-month period between July 2014 and the start of the current year proved to be a disastrous one for commodity markets around the world. Just as China’s rapid economic growth and insatiable appetite for industrialisation drove the commodities “super cycle” to unprecedented heights during the 2000s and early 2010s, the same economy was held chiefly responsible for the collapse in the sector’s prices during the following years, as a marked slowdown took effect.

With global demand for most commodities becoming weaker as a result of China’s declining growth rates, an imbalance between demand and supply began to emerge. By the second half of 2014, oil, coal and copper were among the major commodities to suffer at the hands of a growing surplus in global supply that dragged market prices down further.

To compound matters in the case of oil, supply continued to be churned out at record rates, as an output war arose between oil-cartel OPEC (Organization of the Petroleum Exporting Countries)—Saudi Arabia in particular—and US shale-oil producers. With both countries unrelentingly keeping the taps on throughout 2015 in a bid to prevent losing their respective market shares, global supply continued to swell—and continued to add downward pressure on prices in the face of weak global demand. 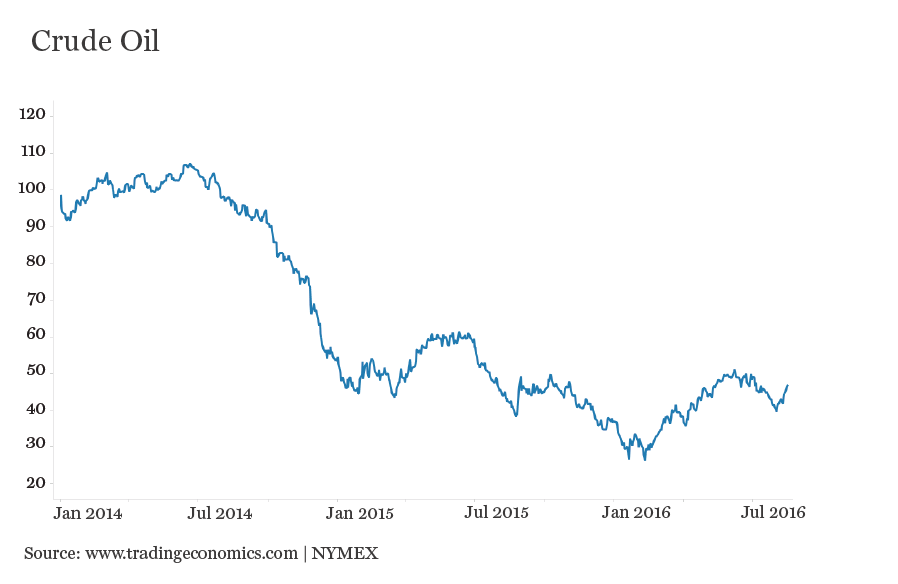 Indeed, by early 2016, the price of the front-month futures contract for the US benchmark crude oil grade, West Texas Intermediate, hit a 12-year low of $26.05 per barrel (as shown above). As such, the global price collapse put heavy pressure on the profitability of oil companies around the world, forcing many to file for bankruptcy. Moreover, given that Saudi Arabia can deliver a barrel of oil to market at a decisively cheaper cost than US shale producers, the output war forced many American oil and gas companies in particular to seek Chapter 11 bankruptcy protection.

According to research conducted by law firm Haynes and Boone, an astounding 90 oil and gas producers have filed for bankruptcy between January 3, 2015, and August 1, 2016. In doing so, nearly $67 billion of aggregate debt has been declared. Despite oil’s modest price recovery since February, moreover, the bankruptcies have continued to pour in thick and fast, with one week in May particularly standing out, when Oklahoma-based SandRidge Energy reported a whopping $8.2 billion deficit, and seven firms in total declared bankruptcy on debts of at least $26.7 billion.

While the US has experienced the lion’s share of oil and gas bankruptcies, the problem has plagued producers across the globe. According to a recent report from GlobalData, the US saw the most bankruptcy filings between fourth quarter 2014 and second quarter 2016, with 93 out of a worldwide total of 113. This was followed by Canada and Norway, with 12 and 5 filings respectively. Out of the specific sectors, upstream oil and gas companies were the worst affected, with 73 filings, while the equipment and services sectors witnessed 19 bankruptcies during the period. In terms of company size, Norway’s OW Bunker & Trading A/S has been the biggest casualty during the period, with a market capitalisation of $477.20 million.

Even current levels of around $45 per barrel are proving to be insufficient for rescuing energy companies on the verge of imploding. Forty-eight US oil-company bankruptcies have been recorded during the first seven months of this year, thus already eclipsing the total number in 2015, and suggesting that bankruptcies will continue unabated in the near-term. Indeed, with nine US companies filing for bankruptcy in June and July with $6.7 billion of debt, this is proving to be the case.

However, the rate of bankruptcies could begin to slow in 2017. According to the International Oil Agency, the global oil market will almost be balanced next year, as global oil demand is finally expected to rise at a quicker pace than supply. 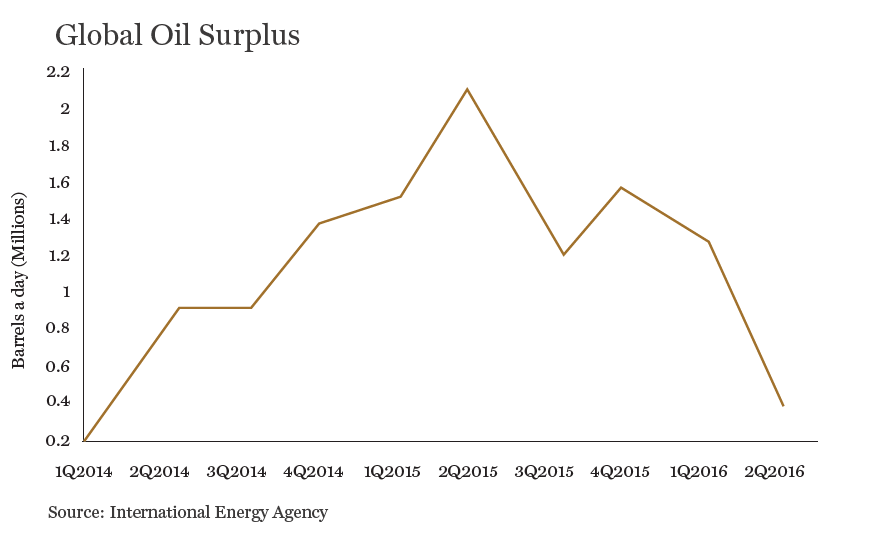 Indeed, the most recent quarter has seen a significant reversal in the market imbalance, which bodes well for equilibrium returning soon. However, the International Energy Agency (IEA) has also warned of an “enormous inventory overhang” that was accumulated during the years of surplus supply, and which is expected to keep a lid on oil prices for some time. As such, it is likely that oil producers will continue to remain averse to ramping up output while such low prices remain.

It should be noted that amidst the gloom, there have been a few successes resulting from bankruptcy filings. Independent Houston-based player Sabine Oil & Gas, for instance, is one of the most recent examples of a company successfully restructuring its balance sheet in order to emerge out of Chapter 11. In Sabine’s case, the measures taken included a debt-for-debt exchange, a debt-to-equity conversion, and the issuance of warrants to purchase stock in the newly formed parent holding company of the reorganized company.

Nevertheless, Haynes and Boone expect the bankruptcy numbers to keep on increasing in the months ahead, particularly as oil prices show little sign of returning to the three-figure levels at which they were trading earlier in the decade. Additionally, a report from auditing and consulting firm Deloitte earlier in the year found that approximately 35 percent of global oil producers are at risk of slipping into bankruptcy in 2016, based on a review of 500 publically traded oil companies. According to Deloitte, in spite of the fact that 95 percent of global oil producers can produce oil for less than $15 per barrel, it may not be enough for some producers to stave off bankruptcy. With energy companies the world over struggling to even pay the interest on mountains of debt, and with access to capital markets, financial support from banks and risk-management protection all waning rapidly this year, Chapter 11 is likely to be just around the corner for many more oil companies while low prices persist.