Top Posts
Interview with Mr. Olukayode Pitan, Chief Executive Officer and Managing...
Commodities Outlook for 2023
The Value of Cash in a Time of Crisis: How...
The US-Africa Leaders Summit: Fostering a Closer Relationship with the...
Three Key Sectors in Which to Invest in 2023
Three Key Stocks in Which to Invest in 2023
Home Brokerage The Crucial Importance of Investment in Public Infrastructure for Economic Recovery
Brokerage

The Crucial Importance of Investment in Public Infrastructure for Economic Recovery 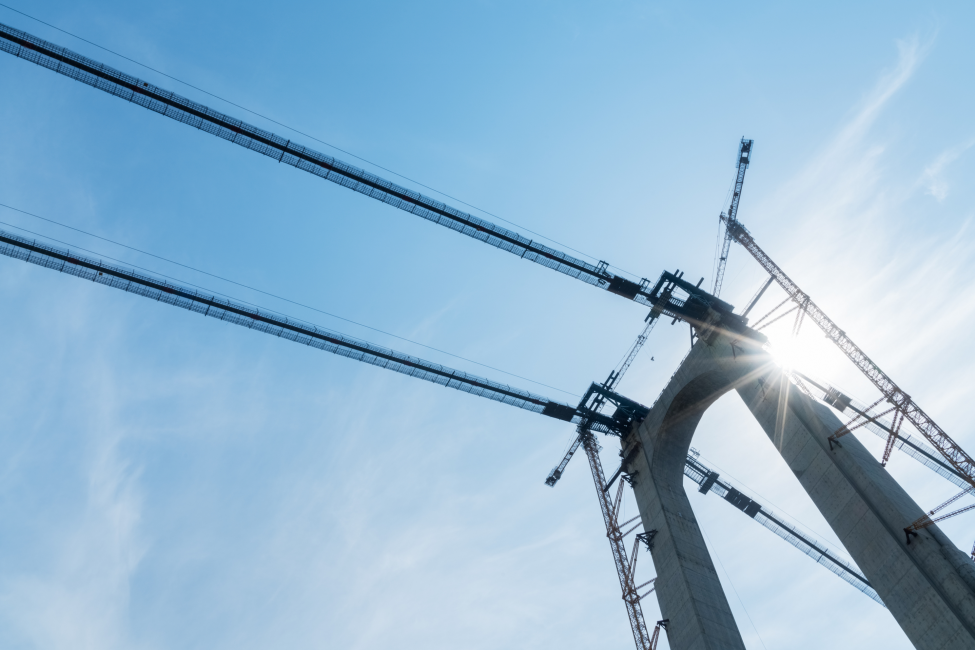 According to the American Society of Civil Engineers’ (ASCE) “2021 Report Card for America’s Infrastructure”, the current state of US infrastructure is good enough to receive only a C-. The scorecard is published every four years, and although the latest review gave a rating above D for the first time in 20 years, there is widespread acknowledgement that a substantial investment needs to be made in the country’s crumbling infrastructure sooner rather than later.

Indeed, the ASCE itself puts the price tag for bringing it back into good repair at a whopping $2.6 trillion over the next 10 years. “While that is an incremental, small improvement, it still is not something to write home about. It’s certainly not a grade that you’d be proud of,” ASCE’s executive director, Tom Smith, told CNN in March. With a new federal administration on board, however, that grade may well have improved by the time of the next scheduled scorecard in four years, as President Joe Biden has pledged to make infrastructure investment a key component of his agenda. “Across the country, we have failed—we have failed to properly invest in infrastructure for half a century,” Biden recently remarked in a speech in the state of Louisiana—a Republican stronghold—to drum up bipartisan support for his plans.

It is not only the United States that plans to rejuvenate the economy through infrastructure spending. With the coronavirus pandemic decimating economies all over the world, and with interest rates at rock bottom or even in negative territory in the US, the eurozone, Japan and other major economies, governments are increasingly having to look towards adopting more active fiscal policy. By boosting infrastructure expenditure, many countries aim to kick-start not only GDP (gross domestic product) growth but also job creation.

Indeed, infrastructure investment is a proven method of successfully stimulating growth in the aftermath of an economic shock. Perhaps most famously is the New Deal that US President Franklin D. Roosevelt enacted in 1933 to accelerate the US recovery from the Great Depression. Among the reforms was a package of public-works programmes to build and improve the country’s infrastructure, including roads, dams, schools and airports. It was largely successful, providing more than 10 million jobs for the unemployed and lowering the unemployment rate significantly over the next decade.

Biden’s American Jobs Plan, meanwhile, is an approximately $2-trillion initiative to improve American infrastructure and transition towards greener energy over the next eight years. “The United States of America is the wealthiest country in the world, yet we rank 13th when it comes to the overall quality of our infrastructure,” the plan states. “It has never been more important for us to invest in strengthening our infrastructure and competitiveness, and in creating the good-paying, union jobs of the future.”

The International Monetary Fund (IMF) has similarly called for governments all over the world to capitalise on this low interest-rate environment and boost infrastructure spending to drive economic recovery from the pandemic. “Investment is now urgently required in sectors critical to controlling the pandemic, such as health care, schools, safe buildings, safe transportation, and digital infrastructure,” the IMF stated in its fiscal monitor report in October. It also calculated that by increasing their public investment by 1 percent of GDP, advanced and developing economies could grow their GDP by 2.7 percent as well as create seven million jobs directly and between 20 million and 33 million jobs in total when accounting for the indirect macroeconomic effects of such investment. “Even before the pandemic, global investment had been weak for over a decade, despite crumbling roads and bridges in some advanced economies and massive infrastructure needs for transportation, clean water, sanitation, and more in most emerging and developing economies,” IMF’s fiscal affairs director, Vitor Gaspar, wrote in October, adding that “low interest rates globally also signal that the time is right to invest”.

The research strongly supports infrastructure investment as a leading stimulus for economic growth, moreover. The Global Infrastructure Hub, a G20-created organisation that connects the global community in helping to fulfil the group’s infrastructure ambitions, found that public investment—which represents a proxy for government investment in infrastructure—is more effective than other types of public spending in increasing economic output, particularly over the medium term. This was the main finding from the Hub’s analysis of more than 3,000 estimates of the fiscal multiplier—that is, the impact that increases in fiscal spending will have on GDP—from more than 200 academic studies over the last 25 years, published in December 2020 to support the “G20 Action Plan in Response to the Covid-19 Pandemic”.

The research also found that public investment has an average fiscal multiplier of about 0.8 within one year and around 1.5 within two to five years. These multipliers are higher than those found for public spending as a whole across both timeframes. 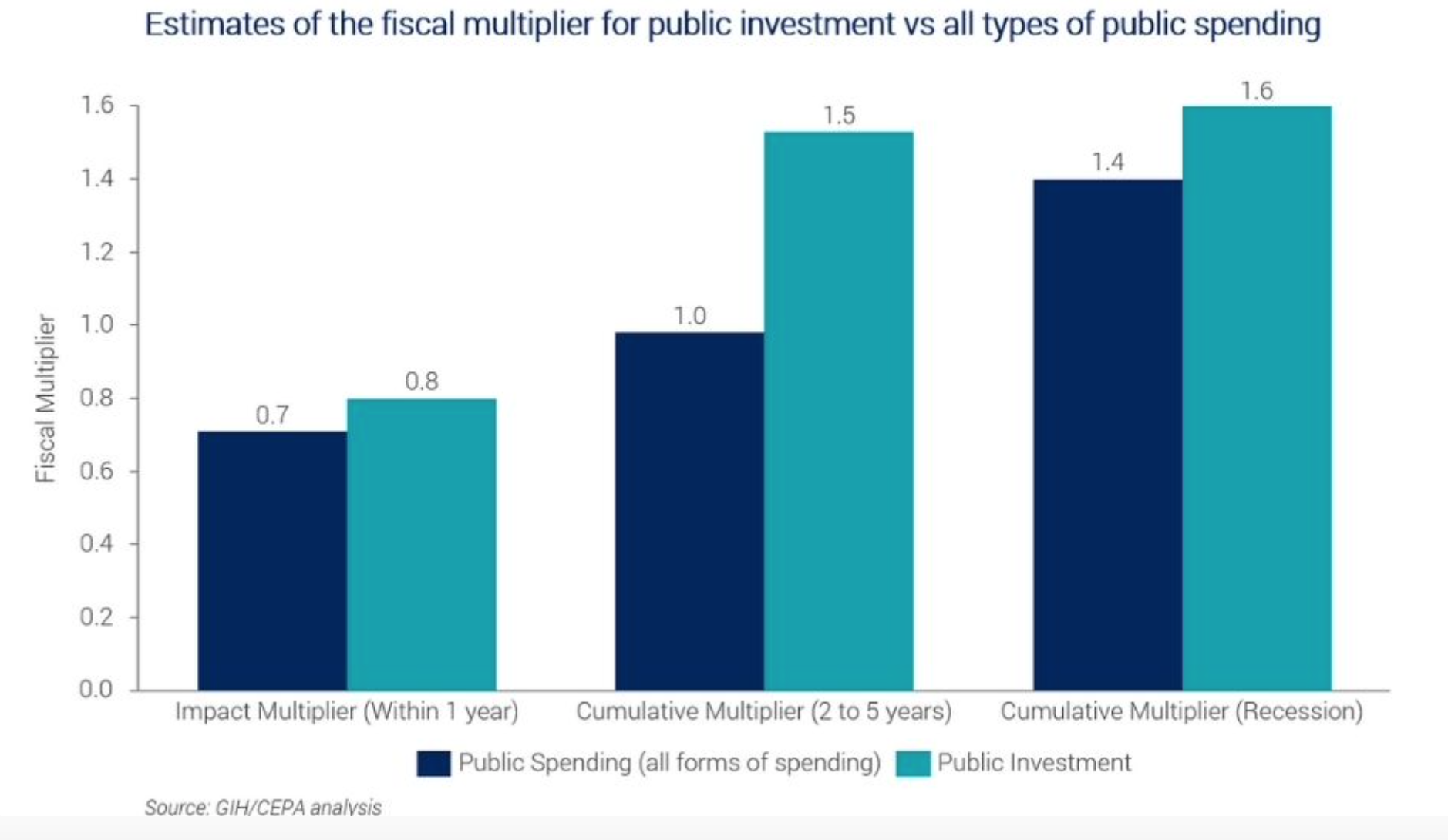 Perhaps more importantly, given the current climate, the research revealed that “this multiplier effect tends to be larger—at around 1.6—during the contractionary phase of the economic cycle, suggesting that public investment is generally less likely to ‘crowd out’ private economic activity in times of recession”.

Such analysis bodes well for turning to public-infrastructure investment as a tool for stimulating economic growth and job creation during this recovery phase. It can also prove particularly effective given the unique nature of the COVID-19 economic crisis, caused by the global shutdown of economic activity rather than fiscal imbalance and/or economic mismanagement that have typically triggered previous crises. In turn, this means that a rapid global rebound in activity should transpire on this occasion; that said, the longer the coronavirus continues to weigh on economic activity, the greater the magnitude of the fiscal intervention required through such measures as infrastructure spending.

Nonetheless, government stimulus programs can also use this opportunity to direct funding towards more sustainable and green infrastructure, which will boost the resilience of infrastructure to climate-change threats. Indeed, the IMF highlighted that public investment in such infrastructure projects could both address climate change and pay back more than two to one in economic growth within two years.

According to the International Transport Forum of the OECD (Organisation for Economic Co-operation and Development), an intergovernmental organisation with 62 member countries, the projects that are most likely to deliver the required economic stimulus are those already in the pipeline, which have cleared planning and environmental approvals and are only awaiting funding. “The necessary critical investment mass should be achieved by a large volume of smaller projects that can be initiated quickly, including maintenance projects,” the think tank concluded in March in its policy brief “Stimulating Post-Pandemic Recovery through Infrastructure Investment”. “Distributing funds to local authorities for disbursement can enhance the speed of project delivery. The infrastructure stimulus should be publicly financed: making PPPs a major part of a stimulus package would be counterproductive.”

Deloitte, meanwhile, contended that developing long-term megaprojects as well as accelerating those projects that were already in the pipeline and focusing more on sustainable infrastructure will be crucial in driving the recovery of the global economy after the pandemic. “By building on projects that are already in the pipeline, and focusing on more than just economic benefits, but also for e.g. sustainability goals, governments can build back better,” the consulting firm stated in its June 2020 paper “Infrastructure Investments as Economic Stimulus in a Post COVID-19 World”. “It is during construction that megaprojects also have a huge economic impact in terms of job creation and use of raw materials etc. The megaprojects should all continue at the fastest pace possible in the current climate as it provides the base load for the sector and can shield the economy from further job loss,” Deloitte added.

As far as the US is concerned, however, approving an infrastructure bill still remains some way off. “If we get a sizable package through, it would contribute further to the already positive economic rebound that we are seeing and the belief that stronger fiscal support for the economy could continue in the coming years,” said Jim Baird, chief investment officer at Plante Moran Financial Advisors, while warning that such a bill “still has a long way to go to get through a Congress that is very much divided and will have significant questions about how to pay for it”.

For private investors seeking to gain exposure to what could well be a strong growth sector in the coming months, particularly if Biden’s infrastructure bill is passed, there are a number of infrastructure funds that warrant examination. Indeed, there were only nine such funds in 2009 with under $1 billion of assets in total; ten years later, there were 31 funds with nearly $16 billion of managed assets. This only further underlines how important infrastructure has become—and indeed, how optimistic investors are over the infrastructure industry’s growth prospects. And as the world emerges from this economic crisis, investors have an opportunity to invest in a sector that is set to play a pivotal role in future economic growth. “Stocks have started to price in that there is a good likelihood of infrastructure spending coming down the pike,” Eric Marshall, president and co-chief investment officer of Hodges Capital, told Reuters in March.

Some Reflections on Euro Area Monetary Policy in the Current Juncture

How AI Builds and Sustains a Competitive Advantage in Banking