Top Posts
Challenges Remain, But There Are Opportunities to Be Had in...
Interview with Mr. Olukayode Pitan, Chief Executive Officer and Managing...
Commodities Outlook for 2023
The Value of Cash in a Time of Crisis: How...
The US-Africa Leaders Summit: Fostering a Closer Relationship with the...
Three Key Sectors in Which to Invest in 2023
Home Brokerage The Impact of China’s Economic Slowdown on Commodities Markets
Brokerage

Throughout the first half of this decade, China’s economic growth rate has steadily declined. The country’s annual growth figure for 2014 was recently published, with its Gross Domestic Product (GDP) expected to have expanded by 7.3 percent, which would be the slowest annual rate recorded since 1990. It would also be below the government’s growth target of 7.5 percent, marking the first time since 1998 that such a target has been missed.

Accompanying this slowdown is China’s cooling demand for commodities, both domestically and internationally. This fall in demand growth has seemingly contributed to the end of the 2002-2012 commodities “super-cycle”, a demand-driven price cycle that has lasted over a decade—decidedly more than the few years associated with a normal economic cycle. During this super-cycle period, China’s GDP grew by an average of 10.6 percent, and the country became the world’s top importer of commodities.

The Recent Performance of Commodities

The S&P GSCI index tracks the investment performance of the world’s most liquid commodity markets. The index can be used to show the marked decline in commodity performance, as grouped according to respective product classes, over recent years: 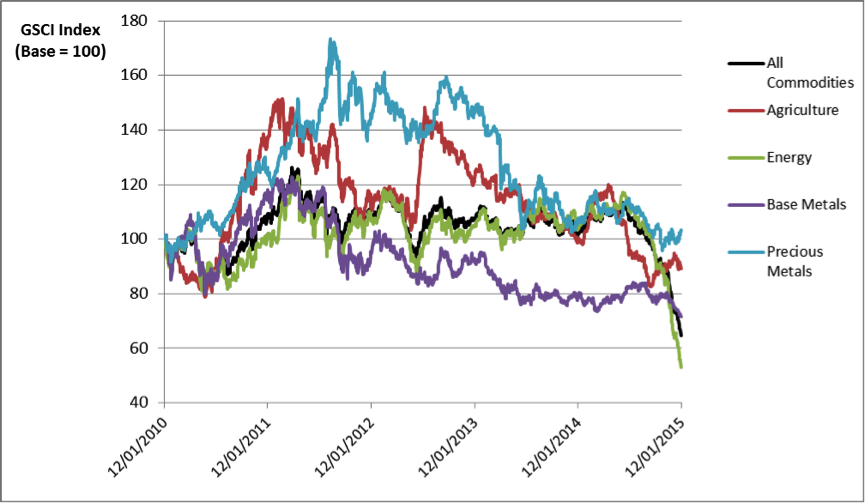 From 2012 onwards, the prices of many commodities started to decline, before the majority of commodities plunged dramatically during 2014. Many economists recognise that China’s economy is still growing and that commodity prices are still considerably above historical levels. However, the combination of a global surplus of output in many commodity markets and expectations of a further slowdown in demand from China continues to underpin current market weakness and drive prices down.

The cotton market has been among the most significantly affected. Following a spike in the cotton price in 2011, the Chinese government initiated a policy of buying much of its domestic cotton output to put into reserve at a higher price than the prevailing world price, in order to support its farmers. As a result, China’s reserves have increased six times since 2010, and it now holds 60 percent of the world’s cotton reserves. Between 2011 and 2013, the world market outside of China saw a year-on-year excess of cotton supply over demand. During this time, China imported cotton in an amount roughly equivalent to this excess, which had the effect of supporting world prices.

However, as domestic demand slowed down, the government was faced with an excess amount of unwanted stockpiles. It, therefore, ended its reserve-building policy in time for the 2014 crop and instead focused on subsidising local farmers. It also began unloading some of its stockpiles back onto the world market at reduced prices, which has since exerted substantial downward pressure on the prevailing world price. By November 2014, the global benchmark cotton futures price was below 60 cents per pound, the lowest since 2009, having lost more than a third of its value since May.

Along with cotton, dampening commodities demand has led to a build-up in inventories of iron ore, coal and grain, which has led to a drop in prices. China has, therefore, implemented a range of protectionist measures in an attempt to limit imports and shield local markets.

In its October Commodities Market Outlook, the World Bank specifically cited demand weakness from China as a principle reason for the fall in metal prices in 2014. Due to a global market surplus of iron ore that coincided with China’s slowdown and the subsequent imposition of import barriers, the price of iron ore fell by 47 percent in 2014 and hit a five-year low of $66.84 per tonne in December.

Between 2013 and 2014, Chinese demand for gold also fell significantly, causing China to drop below India as the world’s top gold consumer. The third quarter of 2014 saw the value of Chinese-gold consumer demand at $8 billion, which is a decline of 38 percent from the $13 billion posted in the same quarter of the previous year. This drop coincided with a $150-per-ounce (or 10.5-percent) drop in the world gold price between September 2013 and September 2014.

According to recent government figures, coal demand in China during the first 11 months of 2014 dropped by around 2.3 percent, compared to the same period in 2013. Coal production in China and imports also fell by 2.1 percent and 9.0 percent respectively. Consumption has been hit by slower economic growth in China, as well as increased hydropower usage and China’s concerted drive to combat pollution, causing local prices to slump to a six-year low. Global prices also hit a five-and-one-half-year low as coal producers experienced a global supply glut in 2014, in the face of weaker-than-expected demand.

Coal accounts for 70 percent of the country’s energy usage and almost half of total world consumption. A 3.6-percent tax on coal imports was also introduced in October to protect domestic coal producers, although a free-trade agreement has been put in place since then with Australia, which should give some relief to Australian coal exporters, several of whom are currently loss-making. A 6-percent tariff on thermal coal remains in place for at least two years, however, which will most likely affect exporters such as Mongolia and Russia.

China’s slowdown has also exacerbated the plunge in global oil prices since July 2014, although it has been less of a direct contributory factor when compared to other commodities. Supply-side issues between OPEC and US shale producers have arguably been more responsible for oil’s recent decline.

Over 2014, crude imports averaged 6.2 million barrels-per-day, 9.6 percent higher than 2013, when the growth rate was 5 percent. Much of this can be attributed to an increase in China’s refining capacity, which has outstripped demand and which can be evidenced by the increase in exports of refined products. Nonetheless, fears over likely future contractions in Chinese demand for commodities in general have certainly added to the bearish sentiment within oil markets.

Despite recent pessimistic Chinese data, tumbling commodity prices proved to be a boon for China in December, as it posted its highest monthly imports of raw materials in 2014. Chinese customs data this week showed that imports of iron ore, crude oil and soy beans, all of which China is the world’s biggest importer, scaled yearly highs in December.

However, the overall value of Chinese imports in December still declined by 2.4 percent—a negative posting for a second month in a row, which highlights the severity of the recent falls in commodity prices. It is believed that China is boosting purchases and filling stockpiles while prices are attractively low, rather than increasing imports on the basis of any economic expansion.

Concerns are mounting that China may enter a “balance-sheet recession”, whereby the sizeable number of companies in debt in China show minimal appetite for borrowing, despite lower interest rates, and instead focus on removing indebtedness. The lack of responsiveness to monetary policy, therefore, implies that economic stagnation is a potential threat.

In September, China’s central bank attempted a monetary stimulus measure of injecting $81 billion into the banking system. It seemed to be ineffective as the overall level of bank lending remained relatively unchanged. The central bank then followed this up with a surprise interest-rate cut in November to encourage lending and prevent inflation from entering negative territory—it is currently 2 percent below the central bank’s 3.5-percent target.

If these measures have their desired effect and spur growth, then commodity prices may stop their decline in 2015. However, it seems as though most industry analysis is predicting a gloomy year for commodities, given the supply gluts that are prevailing in numerous markets, both in China and the rest of the world. A recovery in demand, therefore, may not ultimately be enough to halt the downward spiral.

Latin American and Caribbean Banks and the “Missing Middle”