Top Posts
Challenges Remain, But There Are Opportunities to Be Had in...
Interview with Mr. Olukayode Pitan, Chief Executive Officer and Managing...
Commodities Outlook for 2023
The Value of Cash in a Time of Crisis: How...
The US-Africa Leaders Summit: Fostering a Closer Relationship with the...
Three Key Sectors in Which to Invest in 2023
Home Brokerage Why Has the US Dollar Been Consistently Falling Throughout 2017?
Brokerage

Why Has the US Dollar Been Consistently Falling Throughout 2017? 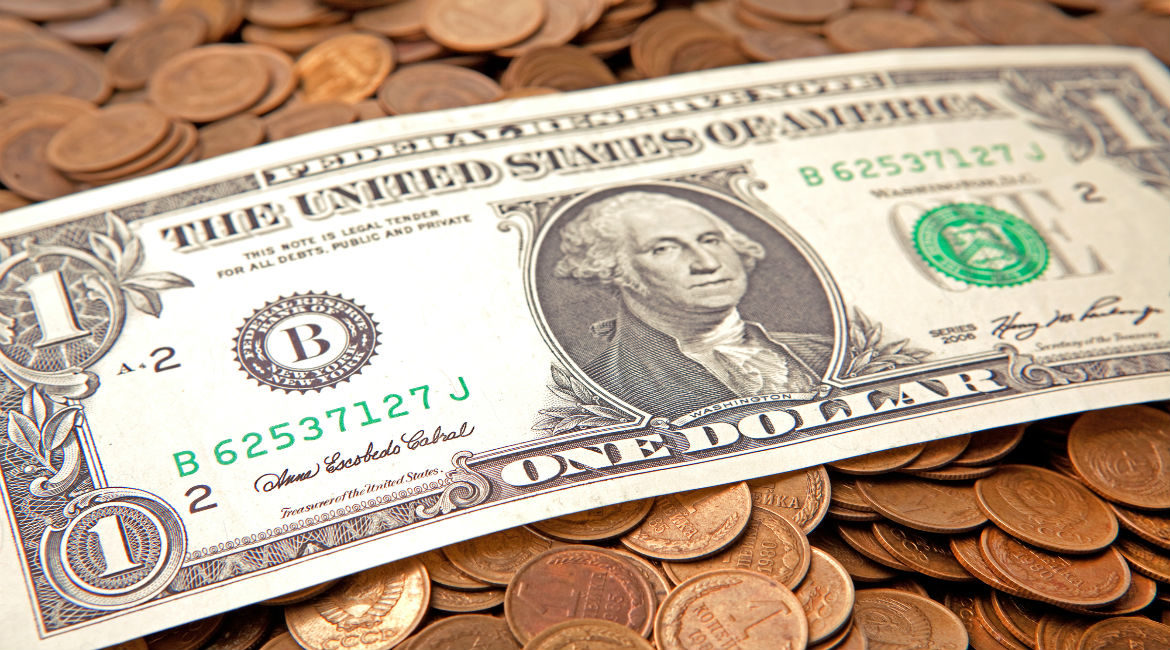 The US dollar is the world’s reserve currency, the representation of US economic might on the global stage and the de facto currency unit for the overwhelming majority of financial assets. Throughout 2017, however, the greenback has taken a long and sustained nosedive to hit multi-year lows. The U.S. Dollar Index, which measures the value of the dollar against a weighted basket of currencies belonging to six of the United States’ biggest foreign trade partners—the euro, yen, pound sterling, Canadian dollar, Swedish krona and Swiss franc—recently slipped to its lowest level in more than two years.

In 2017 alone, the dollar has lost around 12 percent of its value, and its decline of more than six consecutive months marks the longest sustained fall it has suffered in at least 14 years. The dollar’s fall is even more remarkable given that January witnessed the currency notch its highest level since 2002.

A handful of factors have underpinned the dollar’s poor run this year. Among the most impactful appears to be what has come to be known as the “Trump slump”. In the wake of the new US government’s failure to pass healthcare and tax-cut reforms as initially promised, the dollar’s strength has taken a hit as concerns continue to be raised over the Trump Administration’s ability to fulfil its agenda. Compared to November 2016, when the dollar rallied on expectations of the so-called “Trump trade”—that is, that the new regime would implement significant tax reductions, spend up to $1 trillion on improvements to America’s infrastructure and stimulate a higher trajectory for economic growth—confidence in Trump’s ability to push through legislation is now considerably on the wane. According to Deutsche Bank Wealth Management’s Larry Adams, “Delays in the pro-growth Trump administration’s policies have not bolstered growth and in fact, the delay has led to disappointments in the US growth trajectory.”

The unpredictable leadership style of Donald Trump himself hasn’t exactly helped the greenback either—his foreign-policy pronouncements, particularly with regards to North Korea as well as the ongoing investigation into his ties with Russia, have certainly dented investor confidence in the economic and political stability of the US. Indeed, while geopolitical tensions may have once caused investors to seek the relative safety afforded by the dollar, it appears that the US currency is not perceived to be quite the safe-haven fortress it once was. While one may consider such assertions to be largely qualitative in nature, the very fact that the dollar’s bear run has almost exactly coincided with the tenure of the Trump presidency to date is seeming less coincidental with time.

It would also appear that a weaker dollar is the preferred outcome of this new government, with Trump having expressed on numerous occasions that he is actually in favour of such an outcome. The US president stated earlier in the year that while a strong dollar “sounds good”, his actual view on this issue was that “our dollar is getting too strong…it is very, very hard to compete when you have a strong dollar and other countries are devaluing their currency”. Trump’s desire to abandon the US’s previous “strong dollar” policy seems to be on the basis that a strong currency hurts the competitiveness of US businesses by making US products more expensive when sold abroad, which in turn erodes sales revenue. A weaker dollar, therefore, would help push the overall trade balance back in the US’s favour, and would thus fall in line with Trump’s efforts to rejuvenate US manufacturing and exports.

Although systemic factors within the US have played a critical role in dragging down the dollar’s value over the past few months, the currency’s weakness can also be attributed to factors that are largely out of the country’s hands—especially the growing strength of other major currencies. The euro, in particular, has experienced a remarkable recovery this year; it is up by more than 15 percent from its December 2016 low and is now at a three-year high against the dollar at over $1.20. Indeed, the European currency is now experiencing its strongest rally against the dollar since 2009.

The euro’s strength has largely been driven by an improvement in the eurozone’s economic outlook. The second quarter, for instance, saw the region’s gross domestic product (GDP) grow at a healthy 2.2 percent, which exceeded analyst expectations and strongly implied that it is well on the road to recovery after several years of economic stagnancy. The eurozone’s second-quarter performance was also an improvement on the previous quarter, which saw GDP expand by 1.9 percent. As such, there is now more pressure on the European Central Bank (ECB) to raise interest rates, which in turn would likely boost the euro even further. What’s more, many are expecting the ECB to soon bring its quantitative-easing programme to a complete halt—another welcome move toward the euro’s appreciation.

According to September 12 figures from the Commodity Futures Trading Commission (CFTC), hedge funds and speculators now hold the biggest net long euro position since May 2011, which indicates that they have strong expectations that the eurozone’s single currency will continue to make gains going forward. The CFTC’s figures for the short dollar position, meanwhile, is the biggest in over three years, underlining the extent of the pessimism currently pervading the markets with regards to the greenback. This appears to be mostly stemming from diminishing expectations of a further interest rate hike by the Board of Governors of the Federal Reserve System before the end of the year. 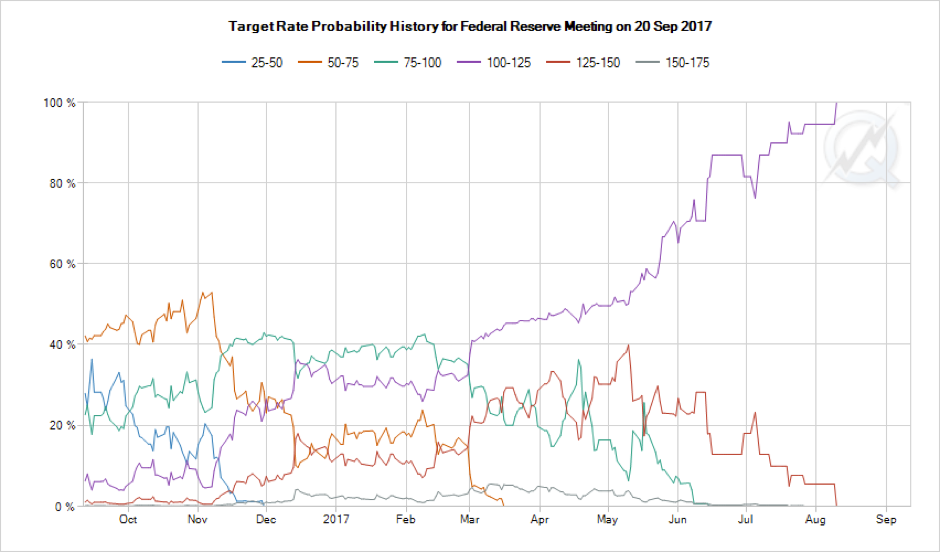 As shown by the charts, the probability assigned to a third Fed rate increase in either the next meeting on September 20 or the following meeting on November 1 is now effectively zero, according to the latest calculations by the CME Group. This is in stark contrast to the pronouncements made by the Fed at the beginning of 2017 that it would very likely raise rates four times during the year. And although the CME Group notes that the probability of a rate increase is much higher for the final Fed meeting on December 13, at 41.1 percent, it is still outweighed by the 57.3 percent likelihood that rates will remain the same once again: 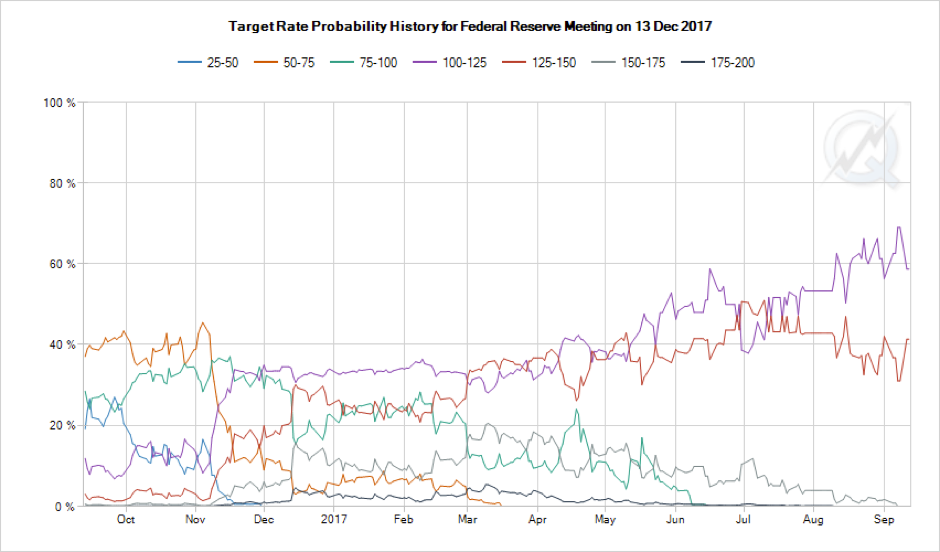 Federal Reserve Chair Janet Yellen recently suggested that interest rates are likely to remain historically low for some time to come. Her more dovish tone is mostly reflective of the country’s dimming growth prospects, as well as its tepid inflation rate. Given that one of the Federal Reserve’s two primary objectives is to maintain a 2-percent inflation rate over the medium term, it has become increasingly difficult for the central bank to justify higher rates when the three consecutive months to July have all seen prices increase at rates beneath this target. An upward nudge in the interest rate would only risk subduing inflation further.

Yellen’s term ends in February, although Trump is reportedly considering whether or not to nominate the central bank chief to stay on for another term. Despite criticising Yellen heavily during his election campaign, Trump recently admitted, “I like her. I like her demeanour. I think she’s done a good job…I’d like to see rates stay low. She’s historically been a low-interest-rate person”. Should she secure another term, then one could reasonably expect more of the same, with the dollar likely to remain relatively weak for the foreseeable future.

Should this be the beginning of a bear cycle for the greenback, moreover, it is also worth remembering that the last instance of a period of sustained dollar weakness remained in place for almost seven years, from 2002 through 2008, and coincided with the tenure of the previous Republican president, George W. Bush. It then recovered towards the latter stages of the Obama presidency. Should history repeat itself with this new Republican president, however, then we may see the dollar languishing for quite some time.

The Impact of Conduct

The Story of the Supercar from 1936 to the Present Day

In regard to the European economy, the structural deficiencies that inhibit robust growth still exist so I imagine that ECB interest rates may be lower than the US for quite some time.

I know right! Foreigners should pack up, leave now and let The greedy American gringos clean up their own mess, That will teach them Ha! Seriously, leave.

China took away a part of American market reducing demand for USD. American economy now dependent on only high tech supplies and the tech diff is fast narrowing. With $21 trillion debt and falling infra, America is in trouble. Bilateral trade arrangement between Russia-China, Pak-China has weakened USD further. However, capital inflow of petro Dollars, Chinese and Russian tycoons investing in USA saved America. Being a magnet attracting brain and wealth from all over the non-European world has sustained and will sustain America as there is little chance of China or Russia or Gulf countries becoming free democracies. USD falling will be marginal. Euro itself may suffer due to break-ups and weakened member economies. So only $ remains the only option for Reserved Currency. At least till TGNs are launched!

Sigh, no the dollar isn’t declining because of President Trump. Leave the President bashing to CNN which we ignore.
Nearly all of the reasons quoted in the article (agenda stalling, economy faltering, etc.) have been disproven since this article was written in November. Historic Tax Cuts and Jobs Act, record stock market, record employment, and so on. America is doing great and will profit from a lower dollar. More exports, more tourists, and so on. While not great for America expats, and I’m one of those, it’s good for America.
Additional interest rate hikes by the Fed will take the edge off early in the year.

I think you mean that the article being written in September is why YOU are off base.