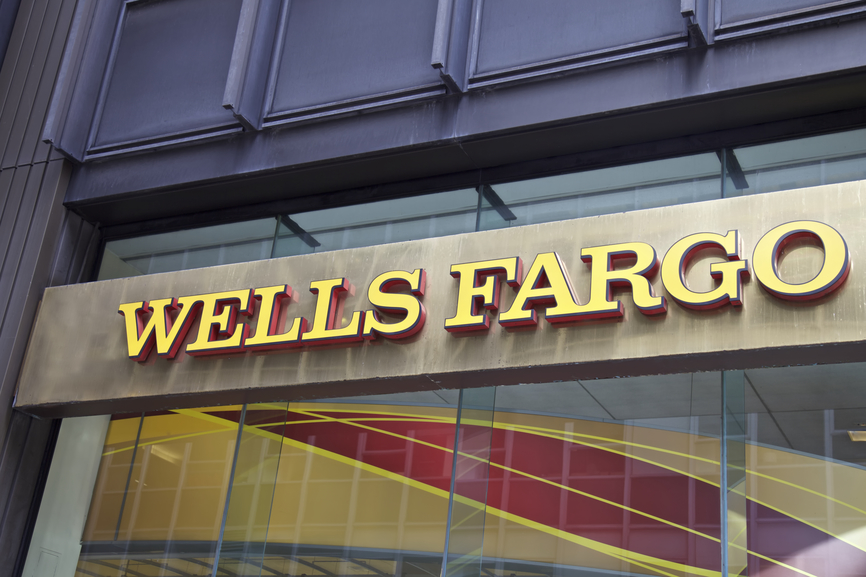 All of the biggest US banks suffered to a certain extent in the second half of 2014, with fourth-quarter earnings particularly dashing Street’s hopes. Citigroup (C), Bank of America (BAC) and JPMorgan Chase (JPM) all missed analysts’ estimates, and even though Wells Fargo (WFC) did meet Street’s expectations, it failed to impress.

Wells Fargo and JPMorgan Chase released their first-quarter earnings reports on April 14. As investors prepared to hear from these big banks, hopes were running high for a rebound from a disappointing fourth quarter. And, to a greater extent than in the recent past, the banks didn’t disappoint.

Aside from being the largest US bank in terms of market capitalization, Wells Fargo has plenty of reasons to remain a darling of growth and income investors. For starters, it has a relatively simple and low-risk business model. Unlike other big banks such as Citigroup, Bank of America or JPMorgan Chase, which rely on investment-banking revenues, trading operations and other income streams to remain profitable, Wells Fargo operates more like a prototypical bank. That is, a model that works on deposits and loans. In fact, the reason the bank has been so successful is precisely because its business model hasn’t changed much over the years.

The California-based bank also has the unique competitive advantage of size, allowing it to use economies of scale to cut costs and run more efficiently. 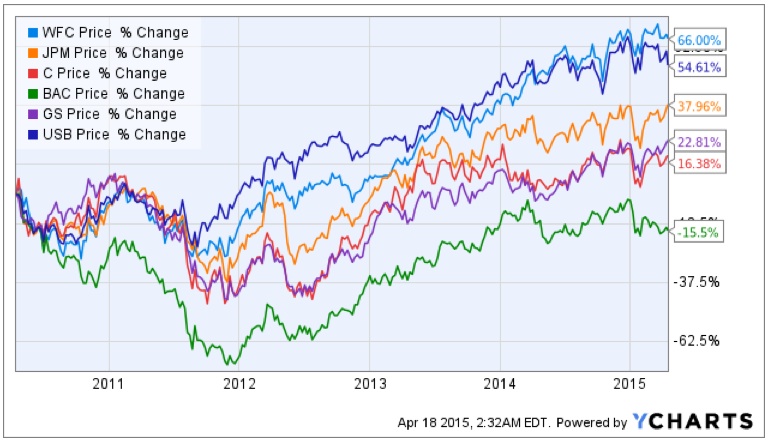 Gaining over 68 percent, Wells Fargo has posted the best stock gains of any other large US bank in the last five years. In the first quarter of 2015, it reported net earnings of $1.04 per share on revenue of $21.3 billion, up 3 percent year-over-year. Analysts had forecast for earnings of 98 cents per share on $21.28 billion in revenue for the quarter. Despite beating Street’s expectations, the bank’s first-quarter earnings per share were a penny less than a year earlier, a rare miss for the company.

Wells Fargo showed strong growth in average loans and deposits. Total average loans were $863.3 billion, up $39.5 billion, or 5 percent, from the same period last year, while quarter-end core loans were up 7 percent to $802.7 billion. Auto loans, an increasingly important business for Wells Fargo, jumped 8 percent from a year earlier to $56 billion. Income from mortgage banking rose 2.4 percent to $1.55 billion in the first quarter, accounting for 14.6 percent of the bank’s non-interest income. Further, mortgage applications in the pipeline rose to $44 billion as of March 31 from $26 billion at December-end. Total average deposits were up 9 percent to $1.2 trillion, in line with Street’s estimates.

Nonperforming assets declined $618 million, or 16 percent, from the prior quarter, and early-stage delinquencies also dropped. Foreclosed assets were $2.3 billion, down from $2.6 billion in the fourth quarter of 2014. The bank also released $100 million from the allowance for credit losses in the first quarter, reflecting continued credit-quality improvement.

Wells Fargo remains well capitalized, with a common equity Tier 1 capital ratio (under Basel III) of 10.53 percent in the first quarter. The bank also continued its share repurchases, as period-end common shares outstanding were down 7.4 million from the fourth quarter of 2014.

Looking at segment results, Wells Fargo’s Community Banking segment reported net income of $3.7 billion, up 7 percent from fourth quarter 2014 but down 5 percent from the same quarter last year. Its Wholesale Banking division saw net income of $1.78 billion, down 8.7 percent from the prior quarter but up 3 percent on a year-over-year basis. The Wealth, Brokerage and Retirement segment posted $561 million in net income for the first quarter, surpassing incomes in prior and year-ago quarters by 9 and 18 percent respectively.

Overall, it can be safely said that results generally showed a healthy banking business with growing revenues, loans and deposits, even though Wells Fargo witnessed a slight decline in earnings.

With more than $2.5 trillion in assets on its balance sheet, JPMorgan is America’s largest bank by assets and holds a dominant position in the industry for its ability to consistently deliver strong results.

True, the bank has been hit with gargantuan fines and settlements related to dodgy mortgage securities and other activities that went on before the financial crisis. And, like other banks, it is salivating at the prospect of the Federal Reserve raising interest rates so that it can begin to make some real money. But even so, it is a reasonably well-run bank with a fairly decent earnings history and future prospects.

As JPMorgan heavily depends on investment banking, it stood to gain from the big rebound in trading and IPOs (initial public offerings) in the first quarter. The bank posted first-quarter net revenue of $24.8 billion, compared to $23.5 billion and $23.9 billion respectively in prior and year-ago quarters. The rise in revenue was primarily driven by strong performance in its Corporate & Investment Bank, both in markets and investment banking. The bank posted an 8-percent year-over-year rise in revenue at its investment-banking business and a 19-percent rise in earnings, boosted by a 7-percent increase in trading revenues to $6.5 billion. On the whole, the investment bank reported a profit of $2.5 billion on $9.5 billion in revenues, with trading revenue rising for the first time in six years.

Additionally, there was an increase in fee revenue in Asset Management and Mortgage Banking; however, that was partially offset by lower gains in its Private Equity division. As shown in the figure below, returns on equity ranged from 16 percent in investment banking to 22 percent in the asset-management business, traditionally a return driver for the bank. 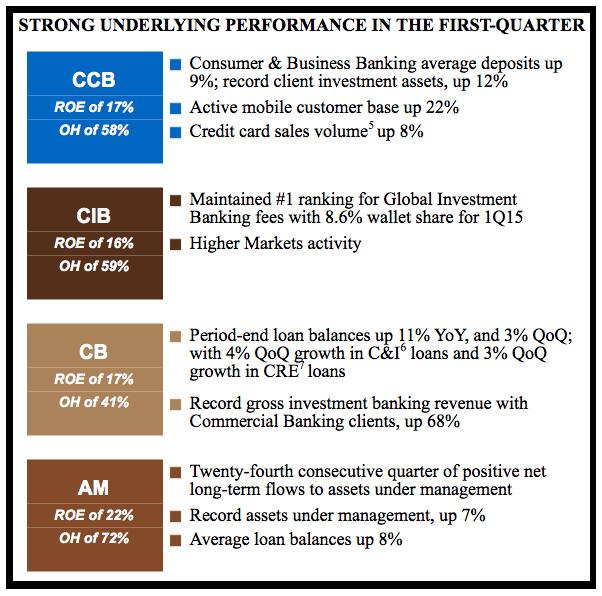 JPMorgan’s Consumer and Community Banking (CCB) revenues were $10.7 billion, up 2 percent year-over-year, while profits rose 12 percent to $2.2 billion, bolstered by higher non-interest revenue. Within its CCB division, consumer and business banking and mortgage banking observed revenue and profit rises. However, the credit-card, consumer-solutions and auto segment reported a slight decline in earnings on unchanged revenue. The segment’s earnings were adversely impacted by rises in provisions for credit losses and a slowing of reserve releases.

The Commercial Banking division of JPMorgan reported flat earnings, even as revenue increased 4 percent to $1.74 billion, burdened by provisions the bank took for expected oil-related losses. Provisions for credit losses within the division increased to $61 million, driven by higher reserves related to oil and gas exposures and net charge-offs.

In all fairness, although JPMorgan had a dismal fourth quarter 2014, the bank has shown improvement and rebounded to a certain extent in first quarter 2015, with increases in revenues for most of its operating segments compared to the period a year ago.

And, yes, JPMorgan had to make changes to its capital program in the first quarter; but what’s important is that it passed the Fed’s stress tests and can go ahead with its plans to return more cash to shareholders. In fact, JPMorgan hiked its dividend by 10 percent to 44 cents, after the central bank’s approval, and also announced a stock buyback program of up to $5.4 billion. The bank returned $3.1 billion to shareholders in the first quarter. The bank also remains well capitalized, with a Basel III common equity Tier 1 capital ratio of 10.6 percent.

Both Wells Fargo’s and JPMorgan Chase’s first-quarter results surprised Wall Street, beating revenue and earnings expectations. Given the Fed’s likely rate hike along with the surging volatility in the dollar, the euro and oil prices that have spurred significant activity in the FICC (Fixed Income, Currency and Commodities) markets—odds are that both these banks could continue to surprise, at least for the next few quarters.