Top Posts
Could Big Tech’s Iron Grip on Digital Advertising Soon Come...
Can Recent Oil Discoveries Prove to be a Boon for...
Is It Time to Explore an Alternative to Fractional-Reserve Banking?
Can AgTech Prove Instrumental in Helping to Feed the World’s...
Can the Indo-Pacific Economic Framework Expand US Economic Influence in...
Banks Remain Uniquely Vulnerable to Sophisticated Cyber-Attacks
Home Brokerage What’s Behind Brazil’s Massive Stock-Market Rally?
Brokerage 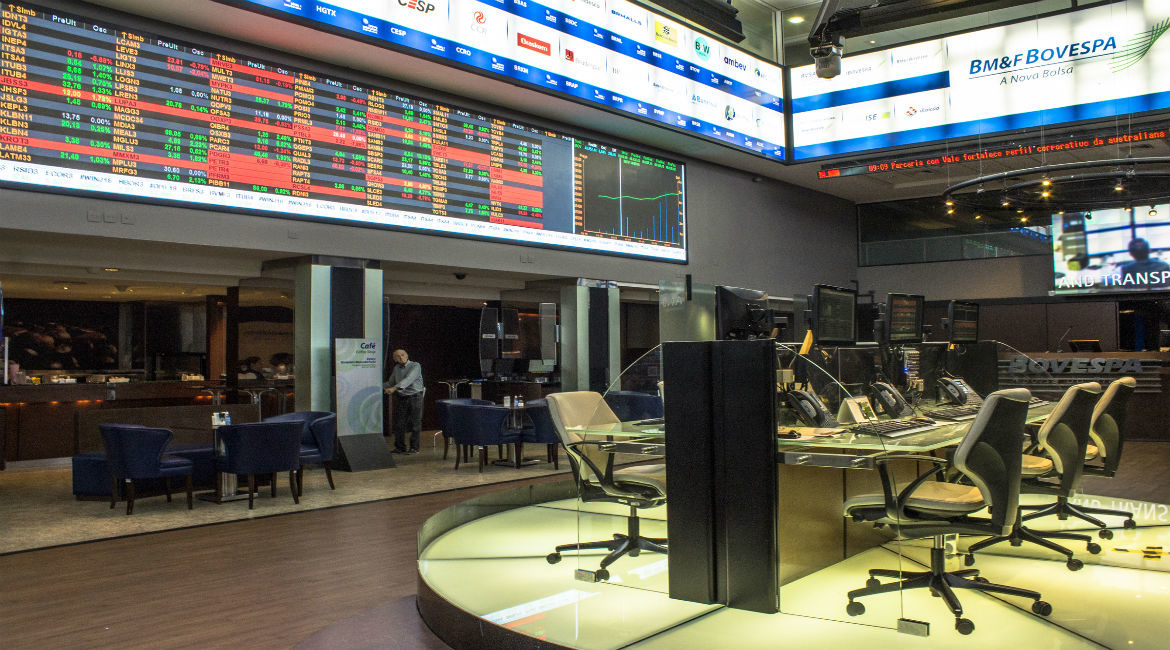 In terms of stock-market appreciation, 2016 largely belonged to emerging markets. The three countries to post the largest gains were Peru, which returned 90 percent over the year; Russia, which gained 84.13 percent; and Brazil at 81 percent. Given the political and economic turbulence it has endured over the last few years, as well as the fact that it led the world for the majority of last year, however, it is perhaps Brazil’s benchmark index, BM&F BOVESPA (Bovespa), that turned in the most remarkable performance during the 12 months. What’s more, when solely using the US dollar to compare global stock indices, Brazil comes out at as the best performer of the year: 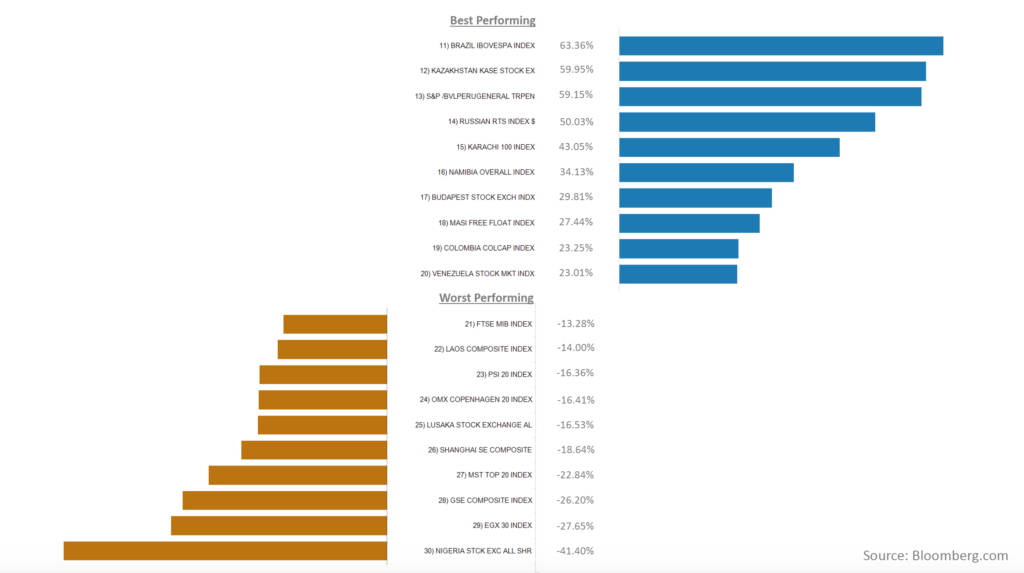 Bovespa’s stellar year is even more notable when one considers the dismal performance it recorded during much of 2015. Indeed, the market lost a whopping 35 percent during the nine months to January 2016. 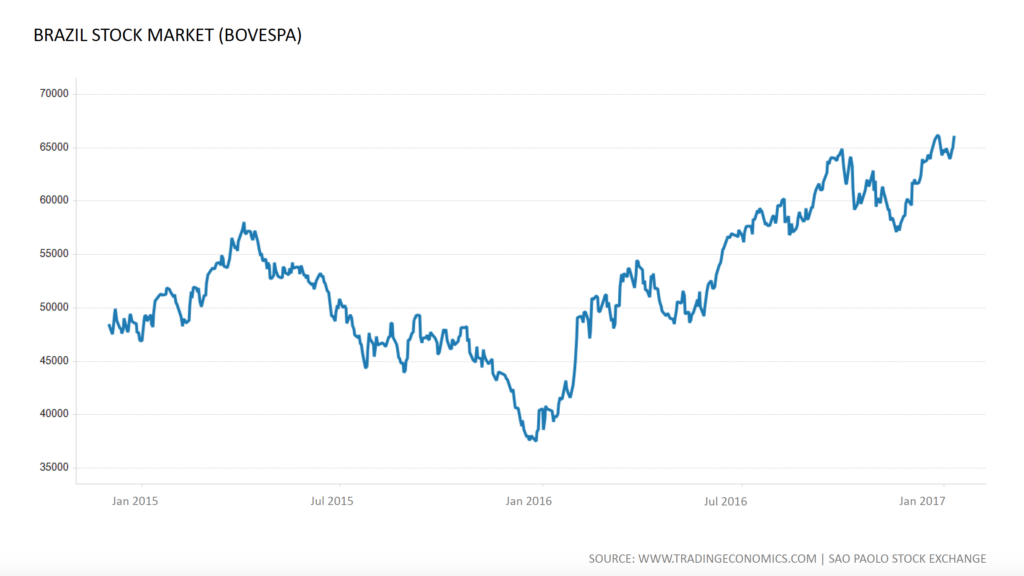 To recap, Brazil is currently enduring its worst recession in modern times. 2015 saw the country shed 3.8 percent of its gross domestic product (GDP), while forecasts abound that a further 3.5 percent was lost last year. Moreover, the economic, investment and political climate was overshadowed by a deep corruption scandal involving state-run oil company Petrobras and high-ranking officials; its president faced impeachment; and the country was home to the notorious Zika virus. The Petrobras scandal triggered a major setback for the stock market and prevented Brazilian companies from issuing debt for several months, while the introduction of a financial-transactions tax significantly contributed to an exodus of investor funds. An economic slowdown in China—the destination for the majority of Brazilian exports—and expectations of monetary tightening by the US Federal Reserve only compounded Brazil’s economic and political misery to place its equity markets among the worst emerging-market performers of 2015.

So what has changed? For one, the ousting of Dilma Rousseff finally came to fruition last year. August saw the Brazilian senate voting to impeach the now former president to put an end to 14 years of rule by Rousseff’s Workers’ Party. Expectations of the impeachment during the first half of the year, as well as the optimism that permeated through the country following her removal, were key supportive factors for Bovespa’s rally. Many held that the Rousseff Administration was responsible for exacerbating the country’s economic woes, and for ultimately hindering the growth of Brazil’s capital markets. Analysts are now expecting that Rousseff’s replacement, Michael Temer, will enact the necessary fiscal measures required for Brazil to regain its investment-grade credit rating. Indeed, the very fact that the new government is trying to limit government spending through badly needed expenditure curbs and pension reforms has helped to bring much investor confidence back to Brazil.

It’s more than mere optimism, however, that has supported Bovespa’s surge.  A raft of economic data suggests that the worst is now over for the Brazilian economy and that stability is slowly returning, which in turn has steadily boosted Brazil’s profile among global investors. Indeed, the economy is expected to end its recession this year and return to positive growth territory, with 2017 seeing 0.4 percent growth, followed by 2.4 percent in 2018 and 3.4 percent in 2019. The reduction in inflation has been one of the most encouraging signs, with the rate declining almost consistently throughout 2016, from the 13-year high above 10 percent in January 2016 to just over 5 percent one year later. Further supportive indications include the Brazilian central bank’s recent policy of monetary loosening, which saw interest rates cut for the first time in four years in October to 14 percent from 14.25 percent, and more heavily in January by 75 basis points to 13 percent, which was more than the consensus estimate of 50 points. With inflation gradually coming under control, and interest rates on the decline, therefore, confidence among businesses, consumers and investors has been returning, which has helped to propel Brazil’s stock market to five-year highs.

The rally in commodity prices has also bolstered stock markets across the world, most notably in emerging economies. Brazil has been no exception; indeed, gains in oil and iron-ore prices in particular during 2016 were crucial in boosting Bovespa, especially given that commodity producers constitute more than a quarter of its capitalisation. With the worst seemingly over for the beleaguered Petrobras, the oil company climbed by more than 140 percent during the year as global crude prices recovered. It also managed to reduce its mountain of amassed debt by agreeing to sell one of its gas-distribution networks, as part of an overall divestment strategy. Meanwhile, shares of Vale, the world’s largest iron-ore company, have gained more than 300 percent since the beginning of 2016, in line with the metal’s price surge that saw it end last year as one of the top-performing commodities in the world.

As such, it appears that Brazil is now on the verge of escaping its economic quagmire, which has encouraged investors to return to the country’s stock markets in sizeable numbers. GDP and trade figures continue to improve, interest rates are falling and inflation continues to trend downward. The fact that much of the rest of the world is in disarray has only helped to usher funds back into the Latin American giant’s equity markets. Brexit, Trump, a slowing China and a stagnant Europe have created a general climate of uncertainty in financial markets, and have thus given little option to global equity investors in search of satisfactory returns. The longer such global problems persist, therefore, the more likely it is that Bovespa will remain elevated, more so should commodity prices continue on their upward trajectory from last year. That being said, the promise of further monetary tightening by the US Federal Reserve could see funds swiftly exiting emerging markets and heading to the US. Whatever happens, 2016 will almost certainly go down as a crucial inflection point during Brazil’s much-needed recovery.