Top Posts
Challenges Remain, But There Are Opportunities to Be Had in...
Interview with Mr. Olukayode Pitan, Chief Executive Officer and Managing...
Commodities Outlook for 2023
The Value of Cash in a Time of Crisis: How...
The US-Africa Leaders Summit: Fostering a Closer Relationship with the...
Three Key Sectors in Which to Invest in 2023
Home Brokerage Why Have European Natural-Gas Prices Been Soaring This Year?
Brokerage

Why Have European Natural-Gas Prices Been Soaring This Year? 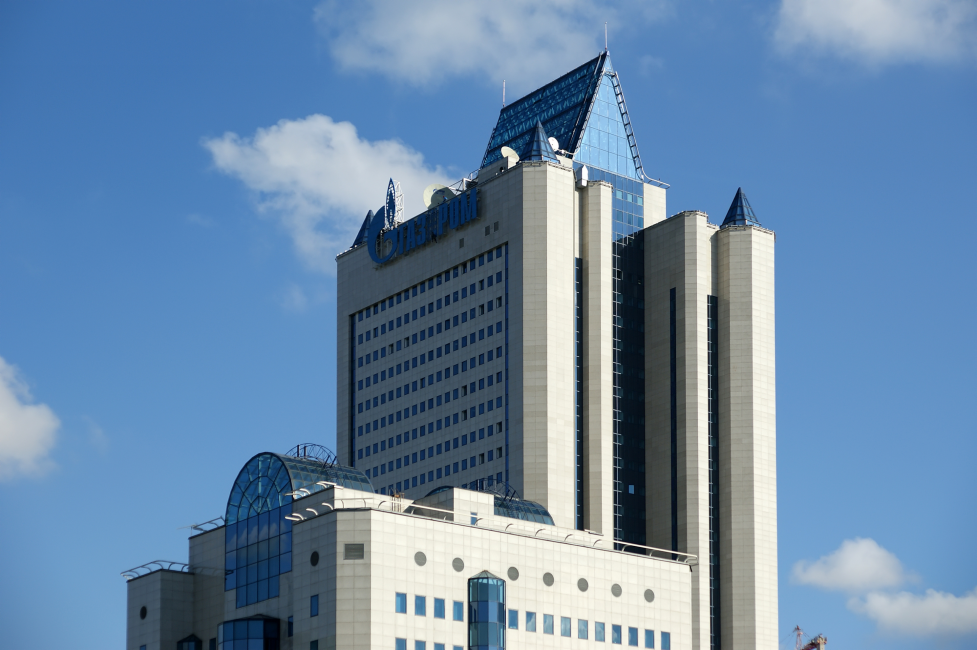 It has been a memorable year for much of the commodities complex, with the economic recovery from the coronavirus pandemic triggering a resurgence in demand for several key fuels and metals. But few markets have experienced a more decisive upward price momentum in 2021 than European natural gas.

Typically, gas plays a crucial role across Europe, often being the fuel of choice for heating homes and offices, and it is used extensively in industrial manufacturing. But a gaping demand-supply gas imbalance in the region has led to bullishness throughout the year that has rarely been observed before, with prices at the Dutch Title Transfer Facility (TTF)—Europe’s leading benchmark gas contract—rising from €36 per megawatt-hour in early March to reach a record high on October 6 above €119. The rally did moderately reverse course throughout October, however, and nearly halved that peak by the beginning of November to hit €61. However, prices have once again headed higher towards €75, meaning that even at those levels, they have more than tripled throughout the year. 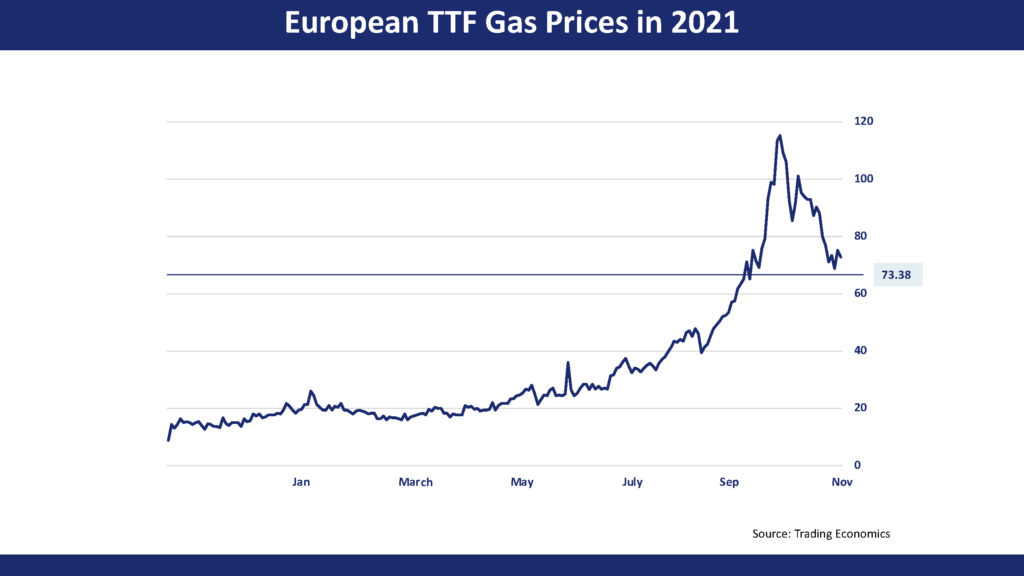 According to the Paris-based International Energy Agency (IEA), meanwhile, a number of supply constraints have only further raised prices, with the COVID-19 lockdowns pushing some maintenance work from 2020 into 2021, thus weighing on supply at a time when demand has been recovering. The impact was particularly tangible in the United Kingdom and Norwegian areas of the North Sea Continental Shelf, the IEA noted in mid-October. “In addition, unplanned outages at LNG [liquefied natural gas] liquefaction plants, upstream supply issues, unforeseen repair works, and project delays all further tightened the global gas market,” the agency added. “The amount of global LNG supply affected by outages in the first nine months of 2021 was up by an estimated 27 percent compared with the average for the same period throughout 2015-2020—with most of the outages unplanned.”

“This is about a surge in demand for energy as we come out of the restrictions imposed by the pandemic, combined with a reduced supply of gas on the global market,” Tim Gore, head of the Low Carbon and Circular Economy programme at the Institute for European Environmental Policy (IEEP), told Euronews in late October. “Then there are other factors exacerbating the problem, particularly in Europe. We have succeeded in getting coal off the grid, and that happens to coincide with a period recently where wind power has been lower because of the weather.”

More recently, a cut in supply from Russia—a major gas supplier to Europe—has been chiefly responsible for sending prices skywards. Initially, the reduction of gas from Russia was due to lower overall production in the country in response to demand being scaled back during the pandemic. But as demand has recovered in 2021, Russian output has failed to rise alongside it. According to Refinitiv Eikon data, the first 10 months of 2021 saw Russia supply a total of 31,806 gigawatt-hours of gas per day (GWh/d) on average via its three main pipelines to Europe, markedly lower than the 33,466 GWh/d during the same period in 2020.

Indeed, Russian supplies represent some 50 percent of Europe’s gas imports. Much of this gas flows through the Yamal-Europe natural-gas pipeline, which goes to Germany via Poland and Belarus, and Nord Stream, which heads directly to Germany. And while Gazprom, Russia’s pipeline gas-export monopoly, has met its commitments for long-term contracts, as confirmed by its clients, it has remained reticent about delivering additional gas for European spot buyers, despite the mounting requests for supplies. “Gazprom’s decision not to book for October the full capacity available at one of the main pipelines that delivers gas to Germany poses an increased tightening risk to north-western European gas balances and, hence, further upside risk to TTF prices this winter,” Goldman Sachs explained in a note in early October. Gazprom has also failed to refill its own storage sites in Europe to the same levels seen in previous years, which has only intensified pressure on the supply side.

In its defence, however, Gazprom insists that it supplies Europe’s gas firmly in line with client demand. According to Gazprom’s head of exports, Elena Burmistrova, Russia does not shoulder any blame for the supply squeeze and subsequent rally in prices. “We want to see a balanced and predictable market,” she said at the Flame gas conference in Amsterdam. “We are not interested in either record low or record high prices.”

The Kremlin has also pledged to boost gas supplies to Europe after filling its domestic inventories on November 8, with the Russian president, Vladimir Putin, ordering Gazprom to boost its gas stocks at its German and Austrian storage facilities, which remain well below average levels and are thus dragging down Europe’s average storage. Indeed, the first week of October saw gas-storage sites across the European Union and the United Kingdom at 76 percent full, significantly lower than the 10-year seasonal average of just under 90 percent, according to data from Gas Infrastructure Europe (GIE). “If Russia does what Putin said it will do, then there will be a big relief,” Frank van Doorn, head of trading at Swedish utility Vattenfall AS, recently said in a Bloomberg interview. “If there is no additional gas coming on Monday [November 8], we could see a significant price spike.”

The rally in prices has also been driven by buoyant demand for gas from Asia, as many economies in the region have emerged strongly from the lockdowns induced by the coronavirus pandemic. China has ordered its state-owned energy companies to secure supplies for the winter, for instance, which has only exacerbated the supply crunch facing Europe and put further upwards pressure on prices. And mainly thanks to a concerted shift across Europe to wean itself off fossil fuels—and onto greener energy sources—investment in natural gas has slowed considerably over the last decade. In turn, the gas price has become more responsive to the kinds of supply shortfalls that have emerged over the last year.

As such, there is growing concern over whether Europe can secure sufficient gas for the winter, with rising prices causing many industrial giants to either shutter plants or scale back production, including fertilizer producer CF Industries and chemicals firm BASF (Badische Anilin- und SodaFabrik). “The volatile trading already shows that no one really knows how high gas can go, but we’re definitely in for a wild ride,” Niek van Kouteren, a senior trader at Dutch energy company PZEM (Provinciale Zeeuwse Energie Maatschappij), said in early October. “The question will be: where there will be demand destruction? If you then see governments stepping in and subsidizing gas prices, like France announced yesterday, there is no incentive at all to lower your demand.”

The outlook moving forward suggests that TTF prices are likely to remain elevated for some time yet. “Gas can go now as high as it needs to knock demand out,” Andreas Gandolfo, leader of the European Power team at BloombergNEF (BNEF), said in early October. “For some European industries gas has become too expensive. For some, including us, who have gas heating at home, it can probably go a lot higher before there is a decision to switch off.”

According to the IEA, meanwhile, some of the key drivers to monitor include the severity of the Northern Hemisphere winter, strength of economic-growth trends and magnitude of unplanned supply outages. “Prices of both natural gas and electricity will fluctuate in Europe depending on temperatures, wind output and many other factors. In this sense, weather conditions will affect markets from both the demand and supply sides,” the agency stated in a commentary published on October 12. “These fluctuations may be exacerbated by reduced natural gas storage levels, since these result in lower pressure levels that weigh on the ability to withdraw gas from storage sites during periods of high demand.”

Operational Resilience – Why Strategic Investment for Banks Is Crucial