Top Posts
How Gamification is Catapulting Digital Banking to the Next Level
Challenges Remain, But There Are Opportunities to Be Had in...
Interview with Mr. Olukayode Pitan, Chief Executive Officer and Managing...
Commodities Outlook for 2023
The Value of Cash in a Time of Crisis: How...
The US-Africa Leaders Summit: Fostering a Closer Relationship with the...
Home Finance Addressing the Gender Inequalities in Financial Services
Finance 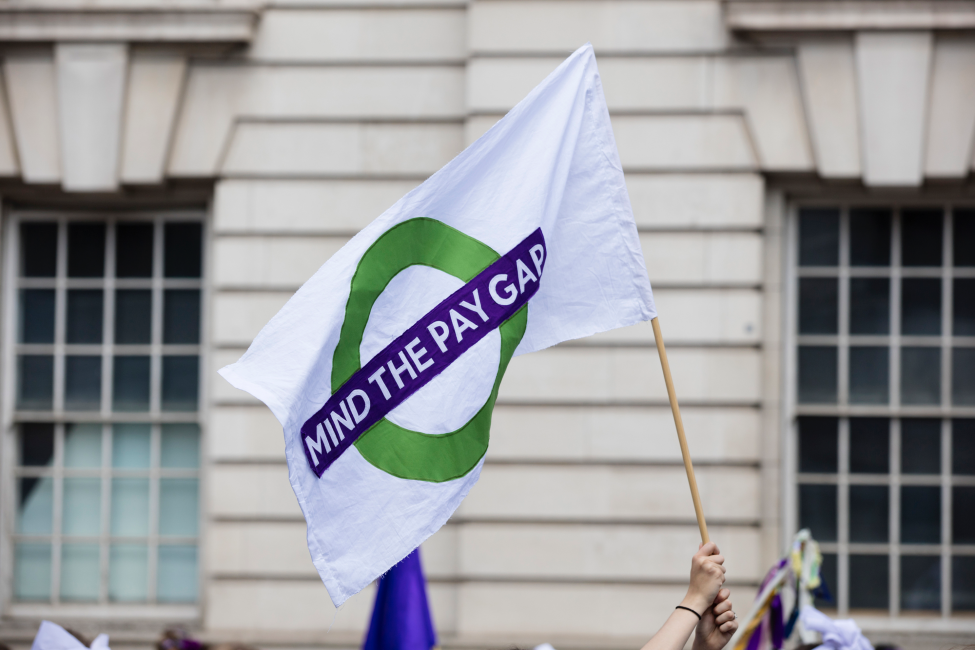 The gender pay gap remains a hotly discussed issue across much of the business world, and it is no secret that financial services continues to be among the industries most in need of immediate work to close this gap. The good news, however, is that there is strong evidence to suggest female- workforce participation in financial services is now growing faster than ever, particularly at the senior end.

“This is the first time we can say that things are really changing. Yes, the progress in the numbers is too slow, but everyone is finally getting impatient,” Diony Lebot, deputy chief executive officer of Société Générale, was quoted as saying in the recent research publication Women In Financial Services 2020 carried out by Oliver Wyman across 468 companies in 37 countries and jurisdictions. According to the study, the financial-services industry is now making the fastest progress comparatively on increasing the number of women in senior-leadership roles since the consulting firm began measuring such trends in 2003. As of 2019, 20 percent of executive committees and 23 percent of boards were represented by women, while 26 percent of firms were made up of more than 30 percent women at the executive committee level, with this number rising to 37 percent for boards. 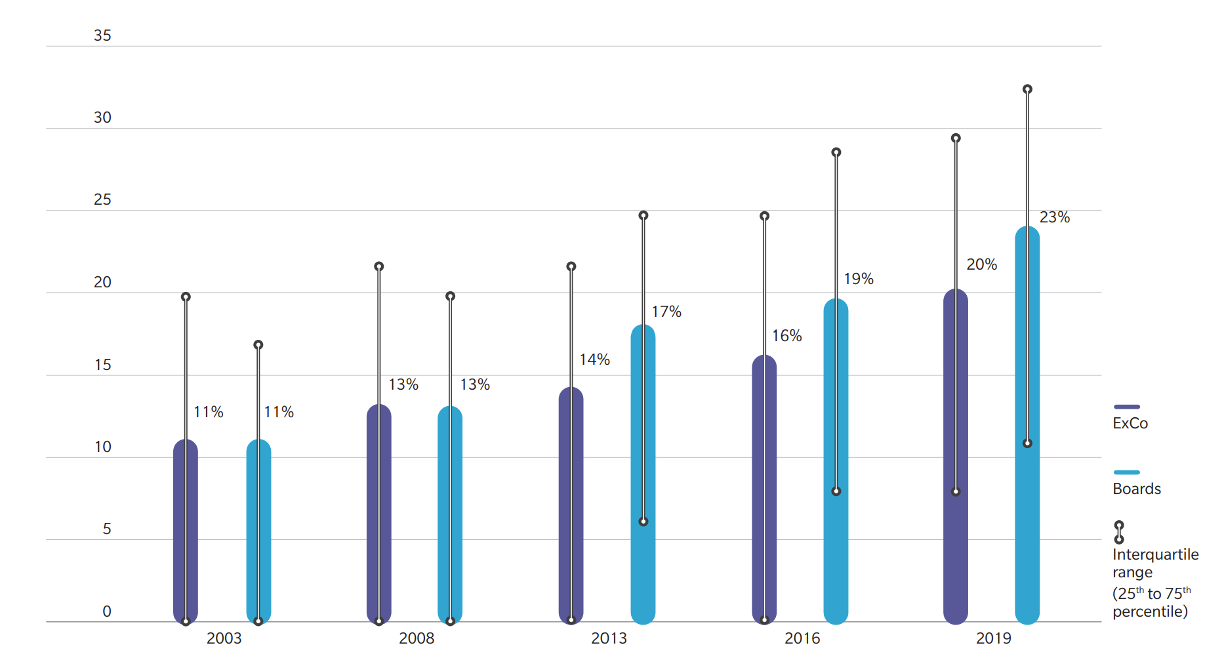 Similarly, the Canadian Bankers Association’s (CBA’s) March 2021 research found that as of 2019, women have occupied 37.9 percent of senior-management positions and 49.1 percent of middle-management positions at Canada’s six largest banks, thus exceeding the federal government’s benchmarks at both levels and placing Canada among the world’s leading banking systems as far as gender equality is concerned. “Many executives in the industry have felt the shift in dialogue on gender in recent years,” noted the Oliver Wyman report. “It is no longer box-ticking; gender diversity is now recognized as a strategic issue that impacts business outcomes. We are seeing more creativity and commitment in attracting, recruiting, and retaining women, with senior leadership starting to be held to account by linking results to remuneration.”

Indeed, this commitment is becoming more visible. For instance, Citigroup veteran executive Jane Fraser was chosen to succeed Michael Corbat as chief executive officer, assuming the role in March 2021 and becoming not only the bank’s first-ever female chief executive but also the first-ever woman at the helm of a major Wall Street bank. And fellow US banking giant Morgan Stanley recently announced that with its chief financial officer, Jonathan Pruzan, becoming chief operating officer, his position would be filled by Sharon Yeshaya, who was previously the bank’s head of investor relations.

However, Oliver Wyman’s research also clearly showed that significant gender imbalances remain deep-rooted, and thus much of the industry’s work in achieving true equality still lies ahead of it. “Most roles occupied by women on executive committees continue to be within corporate functions,” the report acknowledged. “There has been some improvement in the representation of women leading revenue-generating businesses—those most likely to provide the next generation of CEOs. But we are not seeing this change translate into the most senior position(s).” This can be reflected in the dearth of female representation at the chief executive officer level—only 6 percent, according to the report, which the financial consultancy attributed to the persistence of the opinion that placing a woman in this leadership role is a risky option, with higher scrutiny and expectations.

It would seem, then, that more needs to be done—and that would appear to be the clear opinion of women themselves who work in the industry. A recent report published in June by the not-for-profit organisation Women in Banking and Finance, with sponsorship from leading financial firms including Goldman Sachs, Morgan Stanley and BlackRock, surveyed the views and experiences of such women. Of the 79 women interviewed, 44 confirmed that their “high performance was more regularly discounted as compared to men”. Respondents also said that they believed they were treated differently when they made mistakes—for instance, being labelled as either “competent or incompetent in their ability”, despite there being a much larger distribution of perceived ability among their male colleagues. Twenty-two of the respondents also explicitly described the performance of their male colleagues as “mediocre”, which several explained as such men being part of a “social club where other members are gatekeepers with power”.

“Having the opportunities of talented women guarded by managers that favour people ‘like them’ and play bad politics is detrimental for financial services in terms of innovation,” said Dr. Grace Lordan, director of The Inclusion Initiative (TII) at the London School of Economics and Political Science, who led the study. Dr. Lordan also expressed her belief that the final “gender convergence” in financial services will arise only when managers across all levels of seniority embrace an inclusive leadership style that ensures all talented voices are heard, and they support such efforts because they know they are better for their own objectives. “Until this point, we are stuck in a compliance phase where we need to continue monitoring and auditing the progress of women in the sector to ensure progress actually happens.”

So, until this final convergence is achieved, how can progress continue to be made? One solution for addressing the gender pay gap, in particular, is to begin linking pay to environmental, social and governance (ESG) measures, which are already gaining traction across a number of industries. A recent report by PwC (PricewaterhouseCoopers) found that 45 percent of the United Kingdom’s 100 largest companies are now integrating ESG targets into the decisions being made for determining executive bonuses and long-term incentive plans and that 28 percent of the companies are using metrics tied to “newer” ESG topics such as diversity, which is most frequently included in financial-services institutions, as well as employee inclusion and climate change.

Indeed, of the 13 European banks officially classed as global systemically important (G-SIBs), 11 confirmed to S&P Global Market Intelligence that they had incorporated diversity and inclusion metrics into executive-pay decisions. “Spain’s Banco Santander SA, for example, measures part of executive directors’ remuneration against progress toward 11 targets for responsible banking, including a goal to increase female representation in leadership roles to 30 percent and reduce the gender pay gap to zero by 2025,” S&P reported, while British lender Barclays “uses metrics such as the improvement of inclusion scores in employee surveys and progress against a 28 percent female leadership target by 2021”.

The CBA also recently confirmed that Canadian banks have established internal pay-equity plans and have implemented a number of policies and procedures to ensure equitable compensation for both men and women. This includes undertaking regular audits to identify pay differences, requiring that compensation decisions be based on gender-neutral factors; conducting spot checks to ensure there are no biases in compensation decisions; and conducting pay-equity maintenance exercises to correct any salary gaps. And by acknowledging that those organisations that achieve gender diversity outperform those that don’t by virtually every metric, the CBA also highlighted the work Canadian banks are doing to increase the representation of women in senior roles:

Continuing to work to change the cultural perception of banking and finance as being a male-oriented industry will also go some way towards eliminating structural gender inequality, both for employees currently working within the industry and prospective applicants looking to forge careers in finance. Long-held perceptions of banking and finance being exclusively for the “alpha male”, for instance, have done little to persuade women to forge careers in the industry. And with male domination already a long-term trend in terms of sheer numbers, the impact of such a trend on employers’ subconscious bias could well be skewed towards favouring men in terms of hiring and retaining talent.

Company-culture building and team events have been invariably built around men, Campbell & Fletcher Recruitment wrote in June 2020. As such, the all-female niche-banking and financial-services recruitment firm believes it has become of paramount importance that employers make every effort when making hiring decisions to ensure that the language used and image portrayed do not discourage female applicants in the slightest. This could be achieved by always having a woman on the hiring panel to reassure applicants that there is a place in the company for females. “The finance and banking sector must accept that the problem of gender equality and gender pay gaps goes well beyond ‘C-Suite’ level,” according to the company. “We believe we need to see a major change in the sectors; fostering industries” that welcome, support and value a woman’s expertise, encouraging her promotion.