Top Posts
Could Big Tech’s Iron Grip on Digital Advertising Soon Come...
Can Recent Oil Discoveries Prove to be a Boon for...
Is It Time to Explore an Alternative to Fractional-Reserve Banking?
Can AgTech Prove Instrumental in Helping to Feed the World’s...
Can the Indo-Pacific Economic Framework Expand US Economic Influence in...
Banks Remain Uniquely Vulnerable to Sophisticated Cyber-Attacks
Home Finance Analysis of the common currency impact on the integration of derivatives market over the last decade
Finance 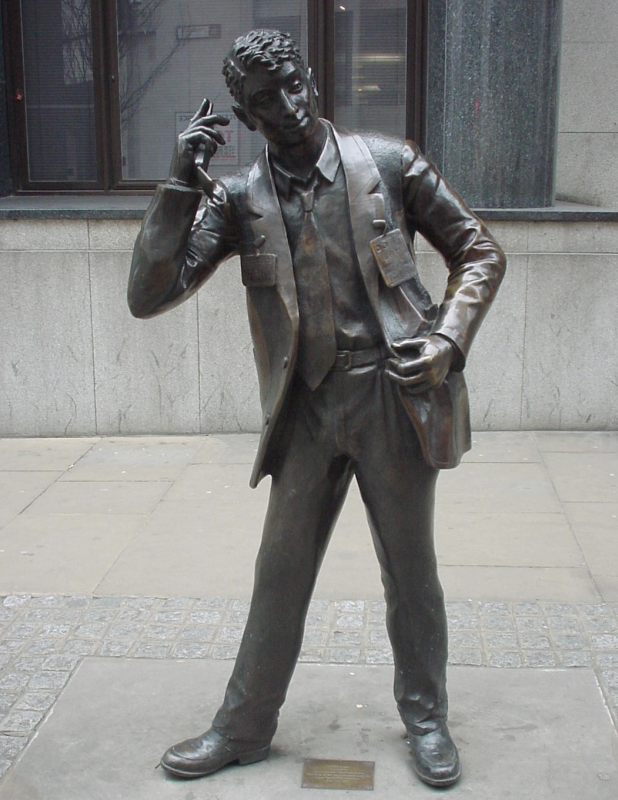 Derivatives are financial instruments whose value is supported by the value of market variable or by the backing asset (for example, changes in interest rates, currencies, probability that the debtor goes bankrupt, etc.) classified into four main categories: forward, futures, options and swaps. Derivatives are mainly used for hedging, speculative operations and arbitration purposes, traded on exchanges and over-the-counter platforms.

The oldest official European derivatives market is the European Options Exchange (EOE) located in Amsterdam, which initially traded stock options (1978). Subsequently, it became part of the Amsterdam Exchanges and later joined the Euronext.

Another derivatives exchange, London International Financial Futures and Options Exchange (LIFFE) began its operations in 1982, offering contracts on short-term interest rates and government bonds, as the main product line, along with long-term bond futures issued by the British Treasury. As the next logical step, LIFFE was opened to the continental market. Deutsche Terminborse (DTB) established in 1991, introduced futures contracts on bunds, in direct competition with those already traded by LIFFE.

In the area of futures and bonds and interest rates options (on short term), EUREX is another significant European competitor of LIFFE. This German-Swiss initiative has been the result of the merger between DTB and SOFFEX (Swiss Options and Financial Futures Exchange) in 1998, currently trading a wide range of derivatives. 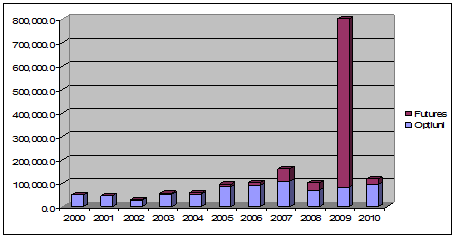 According to the data from the Graph 1, during 2000 and 2010, the notional amount of interest rate derivatives contracts traded on the European exchanges registered a continuous growth trend.

Although initially, most of the derivatives were traded on stock exchanges, the OTC market currently amounts to 85% of total traded contracts (in terms of notional values) reflecting the significant impact on the real economy, from mortgages to food prices. In recent years, the OTC markets have developed very rapidly, the fall from 2008 being the first deceleration since the start of monitoring (1998).

Along with unsecured money market, derivatives represent the area where the implications of the euro on financial integration have been extensively felt, following the reduction of currencies numbers and interest rates associated to the related contracts. Ex post EMU we note the following changes:

Until the late 1990s, dealers typically covered debt positions on non-government securities with government bonds and related derivatives, exploiting the relationship-usually stable- between the yields of both markets. Later on, certain events have occurred indicating the risks of this strategy (the quasi-collapse of Long-Term Capital Management in September 1998 or the occasional compression of Bunds futures). These and others have shown that the peculiarities of government bonds, their uniqueness, quality and liquidity, may cause imbalances in their prices and other credit products, especially in times of financial distress. There was, thus, a need for innovative hedging vehicles, market participants focusing on derivatives to construct yield curves. Given that, interest rate swaps seemed an appropriate solution.

The derivatives market has expanded in its size, becoming more liquid, and popular beyond banking sector activities too. The need to cover both credit risk and market risk, increasingly important in recent years, explains the success of credit derivatives. Again, euro underpins this development. Elimination of exchange rate risk has reoriented investors’ concerns to different facets of credit risk, such as the characteristics of individual borrowers.

Historically, the financial crises manifested in the emerging markets, the terrorist attacks in the U.S. and the failure of some leading companies (Enron, WorldCom) are other events that have brought credit risk into public attention. If the significant tensions experienced by the currency and derivatives markets in late 2008 and early 2009 led to a sharp contraction in the number and volume of transactions, in terms of currencies, the effects of the recent international crisis would have been much more limited. In addition, existing evidence does not reveal any change in the role of the euro as a result of the global turmoil (Bank of International Settlements, 2010).

Amid monetary policy trend changes estimates by the market participants, the volumes of short-term interest rates derivatives have significantly increased.

Among exchange-traded derivatives, instruments based on interest rates and stock indexes experienced the largest decreases, driven by rising risk aversion, deceleration of hedge funds activity and moderate perspectives regarding the stabilization of interest rates in the major economies.

Fluctuations in foreign exchange derivatives primarily reflect spot market trends. The pronounced decline in late 2008 and early 2009 was followed by a strong recovery, mostly due to increased interest to trade, in the context of growing investor confidence and enlargement of interest rate differentials.

In 2011, Brazilian real contracts totaled a value of $0.14 trillion, so this currency ranks second in the global hierarchy of exchange-traded currency derivatives after the U.S. dollar (0.33 trillion USD), but before the common currency (0.10 trillion USD). The importance of the Brazilian real in the currency futures and options markets is determined by trading reduction on the over-the-counter platforms. The traditional distinction between exchange-traded derivatives and the OTC traded ones becomes increasingly blurred.

The International Swaps and Derivatives Association (IDA) has issued a standard contract, which facilitated access to the OTC markets. In addition, the OTC transactions are cleared increasingly in the same way as the contracts operated in organized platforms, through clearing houses.

Table 1 shows the interest rate derivatives have the largest share; at European level, in January 2010, these instruments increase by 30.6% compared to the same month of the previous year. Consequently, the figures prove that this segment has enjoyed a significant revival, diluting the implications of the financial crisis to close to zero.

Figure 1 illustrates the OTC market evolution in the Eurozone during 2001 and 2006. Except for the market of forward contracts (FRA) and interest rate swaps (IRS) that includes the overnight swaps (OIS, sometimes referred to as the EONIA swaps) and other IRS, the graphical representation shows the share of OTC foreign exchange derivatives, i.e. foreign exchange swaps (FX) and cross-currency swaps (Xccy). The OIS and FX markets are by far the most important segments, followed by the IRS.

Interest rate, stocks and exchange rate derivatives traded in the OTC markets have been affected by the same fluctuations as the contracts operated in organized exchanges, even if the notional values of the OTC interest rates contracts haven’t fallen below the pre-crisis levels. Unlike other OTC tools, the volume of credit risk and commodity derivatives has not seen yet a real comeback. The general economic downturn and reduced spreads discouraged new deals, while the financial tensions further diminished the existing contracts amounts.

The international crisis has brought into the attention of regulators the operating deficiencies of OTC-traded derivatives and the credit risk transmission mechanism, given that one of the fundamental causes of the current tensions lies in the inadequate application of sophisticated techniques (securitization and credit derivatives). Although certain negative aspects associated to securitization, excessive risks transfer or incorrect price settings have been fixed by the recent revision of the Capital Requirements Directive (CRD), credit default swaps risks (CDS) and other risks associated to OTC derivatives are still a problem.
The market research shows that within the global arena, the euro derivatives market is one of the deepest and most liquid, attracting a significant number of investors and users, both from the Euro group and worldwide.

In the light of the above, the launch of the Economic and Monetary Union has led to a significant increase in the integration, standardization and depth of derivatives market.
Summarizing, the single currency has facilitated the regional integration of the European capital markets with a stronger impact on the member states compared to non-EZ countries. The EMU effects on the derivatives markets integration translate, inter alia, into improvement of resources allocation, growth facilitation, enhanced opportunities to risk diversification through assets portfolio, consumption smoothing and the transformation of non-tradable capital into tradable capital.

Integration is a gradual phenomenon, constantly evolving without drastic changes immediately after the euro launch. In terms of financial integration, the differences between the EZ members and non-EZ countries indicate that there are other factors, such as the economic integration of the EU, which exert significant influence on the unification of the European capital markets.

While consolidation has revealed a remarkable pace in the period under consideration, the securities exchange market in the euro area still remains fragmented and the ultimate outcome of the consolidation process is uncertain. OTC derivative markets face unprecedented regulatory reform. Regulators and policymakers are seeking more transparent and liquid markets that are subject to robust and effective risk management processes. This means that the outcome translates into the followings: significantly less contracts to be transacted bilaterally, new trading venues will enter the market and much more information will be available to market participants. Moreover, it is believed that these changes will have a considerable impact on the global market architecture.

Anticipating the requirements of the global banking industry

Manufacturing in Europe: Re-emerging or grasping at straws?