Top Posts
Designing the Next-Generation Banking Treasury Management
Is the US Finally Warming to the Possibility of Creating...
Enabling the Drive Toward Green Finance with Technology
Why Have Tin Prices Struggled in 2022?
The Devil We Thought We Knew
How China Has Managed to Avoid the Inflation Bug
Home Finance Are We About to Witness a Wave of Unionisation Across the US?
Finance

Are We About to Witness a Wave of Unionisation Across the US? 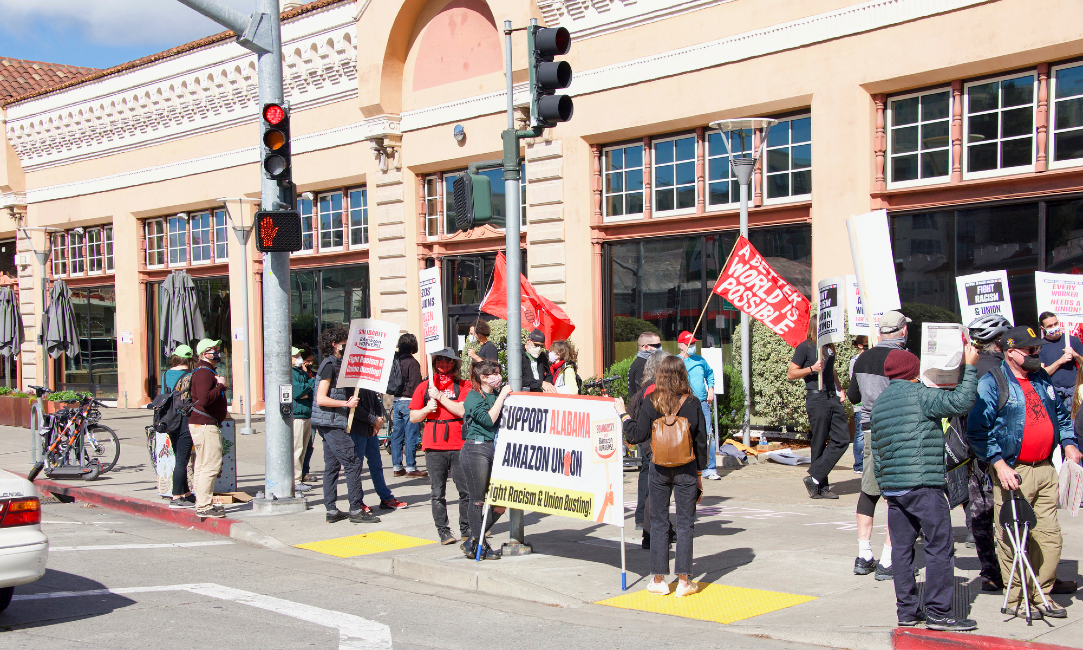 In one of the most significant wins for organised labour in the United States, Amazon employees at one of its warehouses in New York’s Staten Island voted to join a union on April 1. In doing so, the workers handed the e-commerce giant a monumental defeat, despite its orchestrated efforts to scupper the unionisation drive’s progress. It has also raised timely questions about the future of workers’ rights across the country and may permanently transform the relationship and power balance between workers and employers.

The Amazon victory was led by Christian Smalls, who established the Amazon Labor Union (ALU) in April 2021. Despite a high-powered opposition campaign, Smalls led workers at Amazon’s JFK8 facility to victory, as workers voted 2,654 votes in favour of joining the ALU with 2,131 against. As such, the victory shocked many who had assumed the retail behemoth would be able to use the vast resources at its disposal to prevent this scenario from arising. “We’re disappointed with the outcome of the election in Staten Island because we believe having a direct relationship with the company is best for our employees,” an Amazon spokesperson admitted after the vote. “We’re evaluating our options, including filing objections based on the inappropriate and undue influence by the NLRB [National Labor Relations Board] that we and others (including the National Retail Federation and U.S. Chamber of Commerce) witnessed in this election.”

A year prior to ALU’s creation, Smalls organised a walkout with his fellow Amazon colleague Derrick Palmer to protest the company’s lack of action in implementing sufficient COVID-19 safety protocols, calling for the warehouse to close temporarily. Amazon then fired Smalls on the day of the walkout: March 11, 2020. But undeterred, Smalls created the labour activist group The Congress of Essential Workers (TCOEW) soon after his dismissal, which helped organise worker strikes across the country at major retailers including Amazon, Target and Walmart. The ALU was then formed the following April.

Meanwhile, Amazon’s resistance to Smalls’ efforts to unionise could be characterised as nothing short of cynical, even falling back on racist tropes to discredit the African American union leader. In April 2020, the notes from an internal meeting of Amazon leadership were leaked to VICE News, revealing the lengths to which the US’ second-largest employer would go to smear him and then make his anticipated failure representative of the entire organising movement. “He’s not smart, or articulate, and to the extent the press wants to focus on us versus him, we will be in a much stronger PR position than simply explaining for the umpteenth time how we’re trying to protect workers,” Amazon’s general counsel, David Zapolsky, wrote at the time.

The efforts of Smalls and company have been part of a growing mass labour movement across America, with the National Labor Relations Board (NLRB) noting a 60-percent increase in workers filing for petitions to enable union elections to be staged. Gallup also recorded 68 percent of Americans approving of labour unions in September 2021, the highest reading the analytics company had observed since the 71 percent recorded back in 1965.

Much of this trend can be attributed directly to the COVID-19 pandemic, both as the key motivating reason for Smalls to organise the initial walkout as well as for creating a much tighter labour market in which employees have been able to capitalise on their strengthened positions. And with the pandemic ushering in dramatic changes in workplace conditions across the US—and indeed, the world—employees have seemingly been emboldened to challenge the working status quo. “It was a wake-up call for those who were pooh-poohing the ability of that campaign and had been sitting back and saying, ‘We can’t organise anything big’,” Kate Bronfenbrenner, the director of labour education research at Cornell University, explained to the Financial Times on April 24. “That had been their excuse. Many, many unions had said that we have to wait for labour law reform. They can’t make that excuse anymore.”

It should be noted that while the JFK8 victory has been among the most significant of this recent wave of worker unrest, given the sheer size of Amazon, it was not the first. Indeed, the final quarter of 2021 saw the worker-resignation rate reach record highs. “I’ve been traveling a lot to picket lines all over the country in the last couple of months, been in so many different states and across all industries,” Liz Shuler, president of the AFL-CIO (American Federation of Labor and Congress of Industrial Organizations)—the main union federation in the US, told The Guardian in December. “But the one thing that’s been really consistent is the sentiment of the working people who are out there taking the risks is that they are absolutely fed up.”

December was also a landmark month for Starbucks workers in a Buffalo, New York, outlet who voted 19-8 to form their first union. The victory seemed to have broken the dam for the coffeehouse chain, as more than 200 of its outlets currently have active union campaigns, and more than 50 have successfully voted to unionise. And unions have also specifically reached out to younger workers and workers of colour to create more focused sub-groups within the broader unions. More recently, Apple’s Cumberland Mall store in Atlanta, Georgia, saw employees form the Apple Workers Union, backed by Communications Workers of America (CWA). If successful, it would be the first unionised Apple retail unit in the country. Apple workers at New York’s Grand Central Terminal store and Maryland’s Towson Town Center store have also recently launched unionisation drives.

But employers are not taking such efforts lying down. Far from it—corporations have awoken to the threat such organised labour movements pose to their bottom lines and are thus now pulling out all the stops to prevent unionisation from becoming a reality. And to that end, it must be noted that not every unionisation drive has been a success. Employees at another Amazon warehouse in Staten Island, known as LDJ5, rejected the proposal to join the ALU with 380 votes in favour and 618 against. “We’re glad that our team at LDJ5 were able to have their voices heard,” Kelly Nantel, an Amazon spokesperson, told CNBC in an emailed statement. “We look forward to continuing to work directly together as we strive to make every day better for our employees.”

“In many ways, this election was even more important to Amazon than it was to the ALU—a second defeat could have proved fatal to the company’s efforts to stop the organizing from spreading like wildfire, just as it has done at Starbucks,” said John Logan, the chair of the labor and employment studies department at San Francisco State University, speaking to the Washington Post. Labour organisers, meanwhile, blamed Amazon’s union-busting tactics for the loss, but Smalls reaffirmed his commitment to the movement. “I’m a fighter. I know that I’m not going anywhere,” the ALU interim president declared. “My team are fighters. They’re not going anywhere. We’re going to hold our head up high, and we’re going to continue to push forward.”

But reports have since emerged detailing the lengths to which Amazon engaged in those union-busting efforts, including holding compulsory classes to persuade workers to vote against the union and hiring consultants to speak with employees whilst they were working. “They have bred a climate of fear and hate at this building,” Julian Mitchell-Israel, a worker at the warehouse and organizer for the union, told the Washington Post in early May. “And it was intimidating for a lot of workers, the incredible amount of misinformation.” Can Amazon get away with such ploys? Not if the National Labor Relations Board has its way. The board’s Brooklyn office recently filed a complaint alleging that Amazon’s mandatory anti-union meetings violated federal law, as did the threats made to workers in those meetings.

Amazon’s defence contends that such meetings are required to ensure employees understand the facts about unions and elections, arguing that companies have been allowed to engage in this practice for decades. “These allegations are false, and we look forward to showing that through the process,” Kelly Nantel told Bloomberg. Amazon also alleges that the union itself broke election rules by attempting to interfere with and shut down meetings with workers. “It’s a bit rich for Amazon to complain about interrupting captive-audience meetings” that are themselves “inherently coercive”, the union’s attorney, Seth Goldstein, explained to Bloomberg. “We hope that Amazon will agree to end this unlawful union-busting practice.”

Indeed, there do appear to be more attempts at establishing accountability against employers who try to derail unionisation efforts. The NLRB’s prosecutors also recently filed a complaint against Starbucks that alleges it broke the law by firing, threatening and carrying out surveillance on workers seeking to form a union. The company is deemed to have fired six employees and retaliated against others. The board’s general counsel is seeking financial compensation, apology letters and a meeting with employees, union and government representatives, and Starbucks’ chief executive officer, Howard Schultz, or North America president, Rossann Williams. The company “is finally being held accountable for the union-busting rampage they went on,” Danny Rojas, one of the terminated employees, stated.

With just a little over 10 percent of workers currently members of a union, however, there is still a long way to go for the US labour movement’s efforts to achieve more bargaining power for employees all across the country. Nonetheless, they can take heart from recent victories that demonstrate that fighting for better working conditions is not a lost cause.