Top Posts
Designing the Next-Generation Banking Treasury Management
Is the US Finally Warming to the Possibility of Creating...
Enabling the Drive Toward Green Finance with Technology
Why Have Tin Prices Struggled in 2022?
The Devil We Thought We Knew
How China Has Managed to Avoid the Inflation Bug
Home Finance Banking: The New Front Line – Russian Sanctions Update
Finance 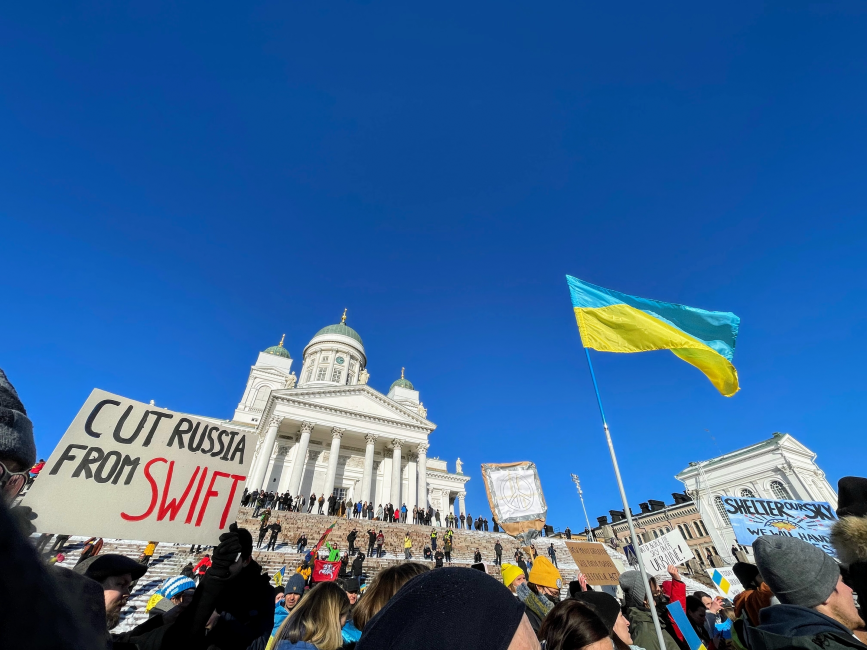 Last week, UK Prime Minister Boris Johnson announced the “first barrage” of UK-led sanctions against Russian economic interests following Russia’s invasion of Ukraine. Johnson and his allies have delivered further, more severe sanctions since, as a result of Russia’s military actions. Designed to hit the Russian government where it hurts, these economic sanctions combine with international efforts to deter Vladimir Putin from attacking Ukraine. In this article we explore the sanctions placed upon Russia in this time of war by UK, EU and US governments and the collective impact this will have on financial institutions.

Which banks have been sanctioned?

Britain has sanctioned major Russian banks as part of their diplomatic solution to dismantle further Russian aggression. The largest of these banks are: Sberbank, VEB development bank, Sovcom bank and Orkritiye1. These sanctions freeze the assets of the parties involved, restricting access to British Pounds held by these institutions, and preventing them from transacting payments through the UK2.

Although exact measures have not been outlined, the PM confirmed similar restrictions will be imposed on Russian ally Belarus.

Individual sanctions have also been implemented, with action taken against Putin’s allies as part of Britain’s economic effort. These high-net-worth individuals have had their UK-held assets frozen and are restricted from travelling to the UK. This follows the US banning Americans from doing business in the rebel-occupied areas of Donetsk and Lugansk in Ukraine3. This is a particularly important sanction from a banking perspective: does your firm conduct business with newly restricted individuals? How would you know if they were beneficial owners of complex structures with accounts in your institution, or beneficiaries of payments made through your firm?

The White House has revealed sanctions isolating Russia from the global financial and trade system in collusion with their allies across the globe.

Following a summit of EU leaders in the early hours of Friday morning, Chief Commissioner Ursula von der Leyen revealed that incoming sanctions will have “maximum impact” on the Russian economy4. Individual sanctions have been implemented against all Russian diplomats involved in the decision to invade Ukraine and banks that are financing Russia’s military. Perhaps the strictest of measures, they have also revoked Russian state access to EU capital markets and services and issued targeted sanctions toward trade from Donetsk and Lugansk with the EU5. The key outcome of the summit is the agreed-upon “five pillars” of sanctions placed on Russian interests.

A regulatory emergency: What steps should banks be taking to protect their business?

A call to action

Firms should implement a robust process to monitor deposits by Russians using UK bank accounts – including thorough manual review to minimise risk. Has it been considered that customers may hold several accounts and could circumvent the restriction limit of £50,000 as a result? Are banks providing services to corporate accounts that are held by trusts or include other complex ownership structures? Are Enhanced Due Diligence measures sufficiently screening all actors placed under new sanctions laws?

The sanctions that have been laid out in this piece vary in severity; with some weakening relationships between the Kremlin and its state-sponsored oligarchs, and other measures aggressively targeting Russian operations with immediate effect. What we can be certain of is more sanctions to come, and it is safe to assume upcoming sanctions will continue to escalate in harshness.

As a result of this, it is vital that firms, particularly those offering wholesale banking services, perform thorough reviews of the beneficial ownership of their customers on a risk-sensitive basis. As we anticipate further action, we believe it would be wise to prepare for wider-ranging measures, and having a deeper, more concentrated understanding of the entities that control your customers may well prove valuable in the days and weeks to come. We also recognise that now is not the best time to have a Russian economic interest within a complex ownership structure; FIs do not want to find Russian connections to their clients, there exists a danger of willful blindness burying these serious matters beneath intricately designed corporate architecture.

Are you sufficiently equipped to handle these changes?

The possibility of severe sanctions against Russian entities and individuals creates challenges for banking and financial institutions and the number of variable factors means thorough planning and anticipation of issues is key to successful compliance. You will need to update all current sanctions filters to reflect the new lists, as well as manage all alerts generated. Are you sufficiently equipped to handle these changes? Upcoming sanctions may be revealed at a moment’s notice, so being in a position to implement immediate action on clients with Russian economic connections is crucial.

As Russian aggression has escalated in the past week, there has been extreme pressure on governments and regulators to use their powers to fight back. The importance of this task eclipses the call for economic damage to the Kremlin; there is a moral and peace-seeking obligation for allied nations to come together and recognise the importance of solidarity with a fightback against invasion. As a result of this, financial institutions are at the forefront of a fight against Russian interests, with a strong expectation from lawmakers, regulators, and the public that they will implement strong sanctions controls. Citizens of Ukraine fear for their lives and their livelihoods. As Ukrainians defend themselves from an advancing military force, financial institutions must return an onslaught of their own.