Top Posts
Challenges Remain, But There Are Opportunities to Be Had in...
Interview with Mr. Olukayode Pitan, Chief Executive Officer and Managing...
Commodities Outlook for 2023
The Value of Cash in a Time of Crisis: How...
The US-Africa Leaders Summit: Fostering a Closer Relationship with the...
Three Key Sectors in Which to Invest in 2023
Home Finance Banks Continue to Pile on Fossil-Fuel Finance
Finance 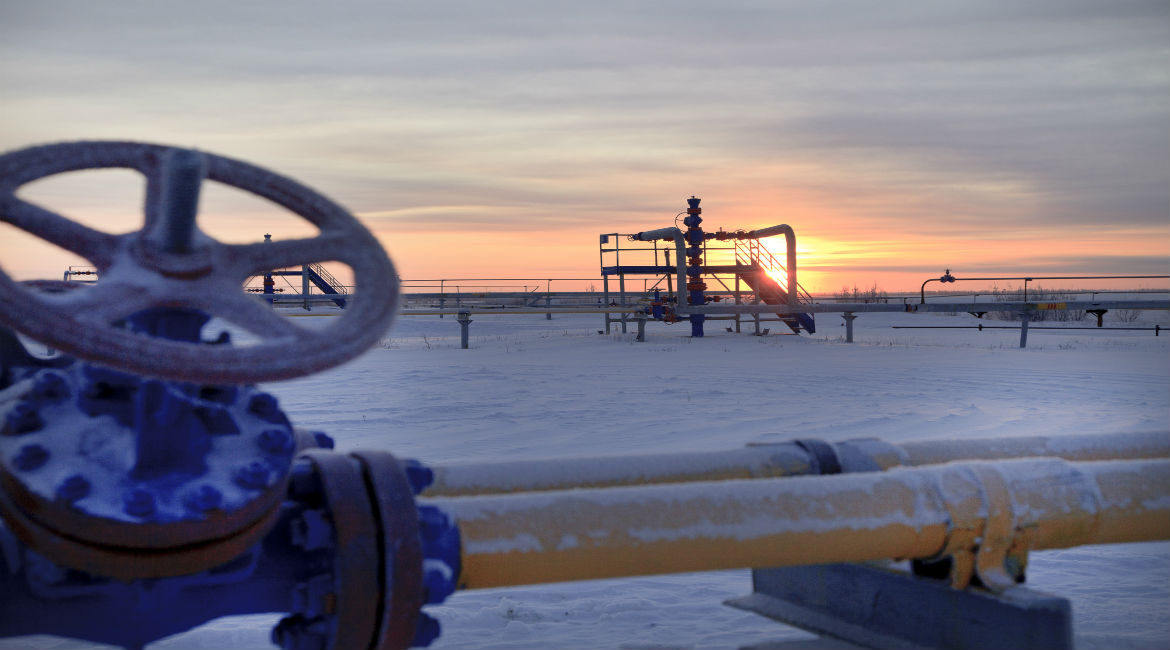 On December 15, US bank Goldman Sachs announced what many believe to be the strongest restrictions on fossil-fuel activity by any major bank in the United States. Most notably, the bank has become the first big American lender to restrict financing on any part of the oil-and-gas sector, with a particular focus on protecting the Arctic National Wildlife Refuge. Goldman is also the first in the US to stop direct finance globally of thermal-coal mines and plants, which includes phasing out financing for major thermal-coal-mining companies that do not have a diversification strategy.

Goldman has also committed to boosting its sustainability strategy, pledging to spend $750 billion on sustainable finance projects over the next decade. The money will be used for the financing, investing and advisory of nine key themes including sustainable transport, accessible and affordable education, and food production. “There is not only an urgent need to act, but also a powerful business and investing case to do so,” Chief Executive Officer David Solomon recently wrote in the Financial Times. “Focusing on these specific goals gives us a set of metrics—such as the amount of carbon reduction and the number of people served—that we can track over time both for the companies and for ourselves.”

According to Jason Opeña Disterhoft, climate and energy senior campaigner at Rainforest Action Network (RAN), Goldman’s updated policy “shows that US banks can draw red lines on oil and gas”. But while Goldman Sachs is undoubtedly making badly needed progress, when it comes to the rest of the global banking system’s record on stopping fossil-fuel finance, their efforts leave a lot to be desired.

Indeed, things have gotten only worse over the last few years. Since the historic 2015 Paris Agreement on climate change, banks’ funding of fossil fuels has risen every year. And the US banking sector is proving to be the biggest culprit of all. The Banking on Climate Change 2019 report—which was sponsored by a range of environmental groups including BankTrack, Honor the Earth, the Indigenous Environmental Network, Oil Change International, the Rainforest Action Network and the Sierra Club—found that 33 global banks financed fossil-fuel companies to the tune of $1.912 trillion between 2016 and 2018. The total pledged in 2016 was $612 billion, which then increased to $646 billion the following year before hitting $654 billion in 2018, which the International Energy Agency (IEA) has calculated was equivalent to a massive 70 percent of all capital expenditure in the global fossil-fuel industry during the same year.

JPMorgan Chase is easily the biggest offender, the report finds. The US’s biggest bank has financed nearly $200 billion in fossil-fuel projects since the Paris Agreement, which is nearly one-third more than second-placed Wells Fargo. It has been the top banker for fossil-fuel projects each year since then and is the number one banker of the 100 companies that are most aggressively expanding their use of fossil fuels—a position it easily holds having financed 69 percent more for these companies than its nearest rival, Citigroup. JPMorgan is also the biggest funder of Arctic oil and gas, ultra-deepwater oil and gas, and liquefied natural gas (LNG) as well as the top US bank for financing coal-mining and tar-sands-oil projects. Only Wells Fargo tops it for fracking activity, moreover.

Indeed, North American banks dominate the top 10 during this period, with JPMorgan, Wells Fargo, Citigroup and Bank of America comprising the four biggest lenders to fossil-fuel projects. European banks have performed marginally better, with Barclays in 6th place, HSBC in 13th, Credit Suisse in 14th, Deutsche Bank in 17th and BNP Paribas in the 18th spot. But given the numbers being disclosed, there is little to celebrate. 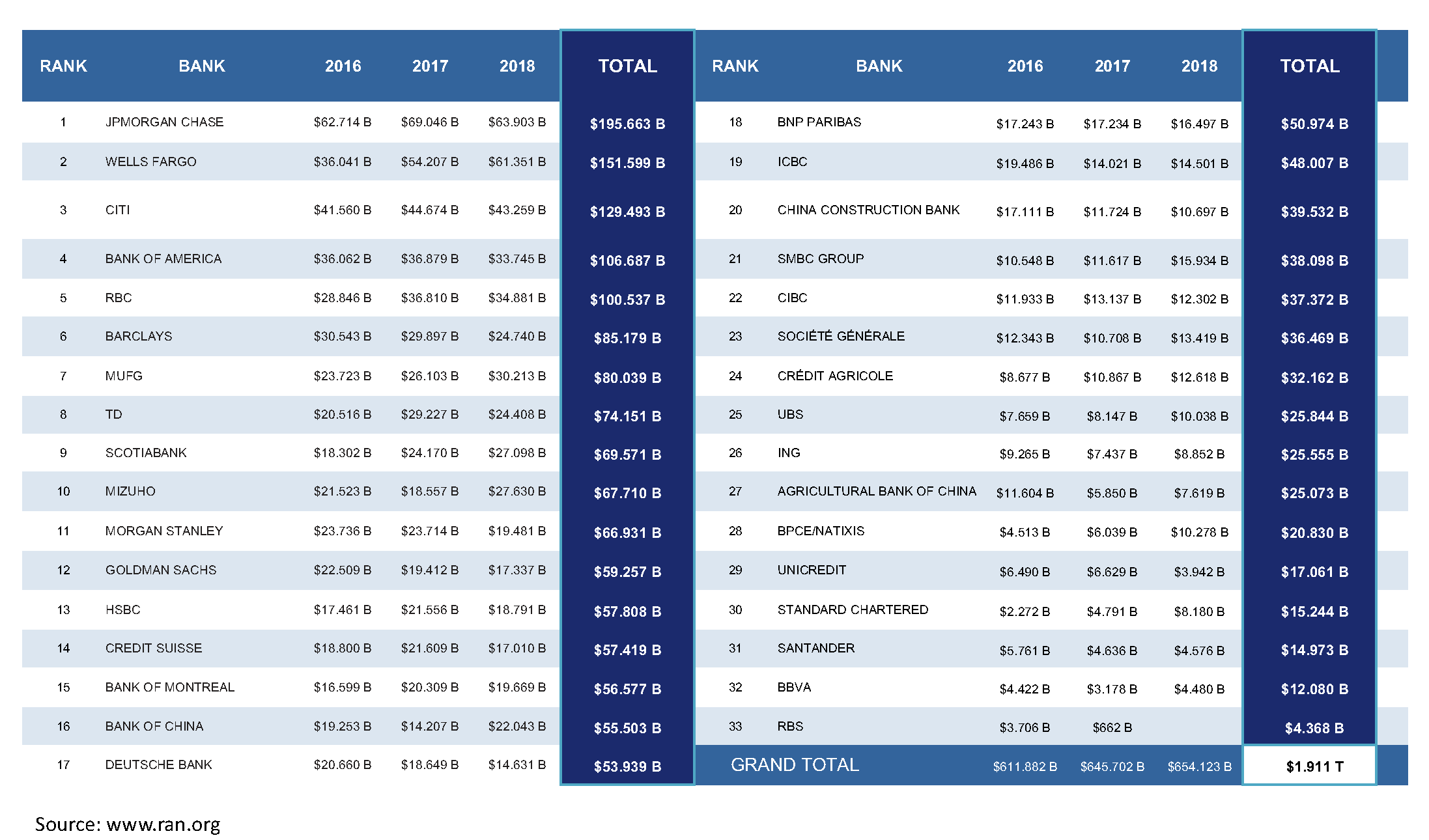 Bank financing for more than 1,800 companies active across the fossil-fuel lifecycle

Out of these 33 banks, 21 have restricted some of their coal-financing activities, 10 have curbed some of their tar-sands-oil financing, BNP Paribas has restricted its support of fracking and LNG financing, and 9 have issued improved policies on coal finance since the previous year’s report card.

“Alarming is an understatement,” notes Alison Kirsch, climate and energy lead researcher at Rainforest Action Network. “This report is a red alert. The massive scale at which global banks continue to pump billions of dollars into fossil fuels is flatly incompatible with a liveable future. It’s an insult to logic, to science and to humanity that since the groundbreaking Paris Climate Agreement, financing for fossil fuels continues to rise. If banks don’t rapidly phase out their support for dirty energy, planetary collapse from man-made climate change is not just probable—it is imminent.”

Similarly concerning results were revealed in November by Boston Common Asset Management, a $2.4 billion investment manager and global sustainability company focusing on investing in high-quality, socially responsible stocks. The company’s report “Banking on a Low-Carbon Future: Finance in a Time of Climate Crisis” surveyed 58 of the world’s largest banks on their responses to climate change, revealing that investment in fossil fuels continues to surge. And that’s despite the introduction of a raft of green-banking initiatives, including the Task Force on Climate-related Financial Disclosures (TCFD), the Principles for Responsible Banking, the Katowice Commitment and the Green Bond Principles.

What’s more, the report identifies that only 50 percent of banks are currently engaging high-carbon clients on implementing some kind of transition strategy, and a mere 12 percent are asking them to adopt TCFD guidelines. “These findings indicate a systematic reluctance by banks to demand higher standards from high-carbon sector clients, despite the fact that doing so could vastly reduce bank risk and accelerate action on climate change,” the report observes.

It has become clear that not enough is being done by the majority of banks. Fortunately, some progress is being made. The European Investment Bank (EIB) announced in November that it will phase out all lending to fossil-fuel projects by the end of 2021. The bank, the shareholders of which include the 28 member states of the European Union (EU), has funded fossil-fuel projects to the tune of €13.4 billion since 2013, with nearly €2 billion of this total pledged in 2018. And although it had already ceased its support of coal back in 2013, it has now extended this policy to also cover oil and gas.

Furthermore, the bank aims to align its funding activities with the objectives of the Paris Agreement by the end of 2020 onwards as well as unlock €1 trillion of climate-action and environmentally sustainable investment over the coming decade. “Climate is the top issue on the political agenda of our time,” acknowledged EIB’s president, Werner Hoyer. “Scientists estimate that we are currently heading for 3-4°C of temperature increase by the end of the century. If that happens, large portions of our planet will become uninhabitable, with disastrous consequences for people around the world.”

While such news is certainly welcome, it still represents a drop in the ocean compared to the vast pool of financing that remains available to fossil-fuel companies. The EIB is far from being a major contributor to the industry—indeed, the €2 billion it lent out in 2018 pales in comparison to the €50 billion-plus provided during the year by the biggest fossil-fuel backers, such as JPMorgan and Wells Fargo. Companies still have plenty of banking options from which they can choose.

But perhaps more than the figures, the EIB’s decision will ultimately be a symbolic victory for climate activists, especially given the bank’s status as the lending arm of the European Union as well as the world’s biggest multilateral finance institution. Its global influence means that a decision to withdraw from fossil-fuel finance has a strong chance of swaying other banks—development or otherwise—to begin doing the same.

Elsewhere, central banks are now boosting their efforts to meet the goals of the Paris Agreement. Following the formation of the Network of Central Banks and Supervisors for Greening the Financial System (NGFS) by eight central banks and banking supervisors in December 2017, membership of the network has swelled to 54 members and 12 observers. Together, they are working on solutions to help strengthen “the global response required to meet the goals of the Paris Agreement and to enhance the role of the financial system to manage risks and to mobilise capital for green and low-carbon investments in the broader context of environmentally sustainable development”.

The non-governmental organisation (NGO) Bankwatch, which monitors the investments of public finance institutions across the globe, meanwhile, has provided eight recommendations, initially directed at the EIB prior to its announcement to stop fossil-fuel financing. But it remains relevant to all banks seeking to pursue a similar strategy:

Mr Solomon of Goldman Sachs recently warned that companies no longer have the “luxury” of treating climate-related initiatives as a “peripheral issue” and financial institutions must support those who are driving change. And while the recent efforts of Goldman and the EIB are certainly laudable, much more needs to follow from the global banking sector. Even this year, Bloomberg found that the first six months saw JPMorgan complete a whopping 90 deals with the fossil-fuel industry and just five deals with renewables. If banks can trigger a drastic turnaround in such numbers sooner rather than later, only then can the world conclude that progress with respect to ending fossil-fuel finance is being made.