Top Posts
This Year Payments Will Be Faster, Smarter and...
Covid-19 Recovery Opens Up New Avenues of Opportunity...
Should We Fear Artificial Superintelligence?
Can Web Scraping Improve Investment Returns?
What Is the Internet of Behaviour?
The Impact of Robotic Process Automation on Financial...
Home Finance Banks, the Fed and Money Markets’ Woes
Finance

The start of 2020 has been a mixed bag for the world’s largest bond and short-term-debt markets, with a renewed threat of a major financial shock to the banks’ liquidity and capital-buffers positions looming large, despite an ongoing Round 4 of monetary accommodation. The state of health of the world’s largest economy and the reserve currency underpinning the global financial system, as signaled by the latest US data, is weak: the trends in fiscal and monetary policies that underlie this data are likely to shape the fate of global banking services well into the second half of 2020. More ominously, adverse headwinds in the fiscal and monetary positions of the US economy are also likely to spill over into political risks with the coming electoral cycle.

The US economy has seen an increasing dependence on fiscal-deficit financing in recent years. As Chart 1 below shows, the difference between nominal-GDP (gross domestic product) expansion in US-dollar terms and fiscal deficits was benign back in the pre-Great Recession days. In fact, from 2001 to 2007, on average, economic growth exceeded annual budget deficits. This changed dramatically during the crisis years of 2008-2013, with good justification. The traditional prudential approach to macroeconomic-risk management means that the government can and should facilitate economic growth by providing supportive or accommodative fiscal policy. This is exactly what happened in the crisis years, swinging the difference between nominal-GDP growth and fiscal-budget deficits into the negative territory. In 2014 and 2015, therefore, as the economy gained strength, fiscal deficits became less important to sustaining GDP growth and the growth-deficit imbalance went back to positive territory, in which nominal economic expansion exceeded fiscal deficits.

The electoral cycle of 2016-17 cut short this period of improvement. However, since 2017, we have been witnessing a truly reckless abandonment by the US federal government of any semblance of fiscal-deficit or macro-prudential policy management. In 2018, fiscal deficits exceeded the total gross value added in the economy by US$108.5 billion. In 2019, this gap rose to $348 billion. In 2020, based on the government and International Monetary Fund (IMF) forecasts, Uncle Sam’s deficit printing will outstrip economic growth by a massive $450 billion. And that is before anyone bothers to factor in the potential risks to US growth arising from relatively new threats, such as the coronavirus (2019-nCoV) epidemic.

How did we get here? The U.S. Department of the Treasury’s data shows that over the 12 months through December 2019, the federal deficit rose above $1.02 trillion, almost double compared to the calendar year of 2016. Worse, the dynamics of deficit increases are adverse. In the first quarter of 2020 (fiscal-year basis), the deficit was up 12 percent over the same period of 2018. The economy grew by just 2.3 percent over the same period on a real basis, less than 4.1 percent on a nominal basis. The first-quarter fiscal-year 2020 deficit was $357 billion against $319 billion in first-quarter fiscal-year 2019. To date, 2020 increases in the fiscal deficit were driven primarily by healthcare-cost inflation and rising military spending.

These developments are underpinned by the economy running at full employment for some years now, investment markets booming and US military commitments abroad shrinking. They are also running parallel to the continued monetary-policy accommodation of the Federal Reserve (the Fed)—more on this later. In other words, these deficits, high by historical standards, are also severely pro-cyclical—a combination of risk factors that has been repeatedly identified as highly destabilizing by economic researchers around the world. 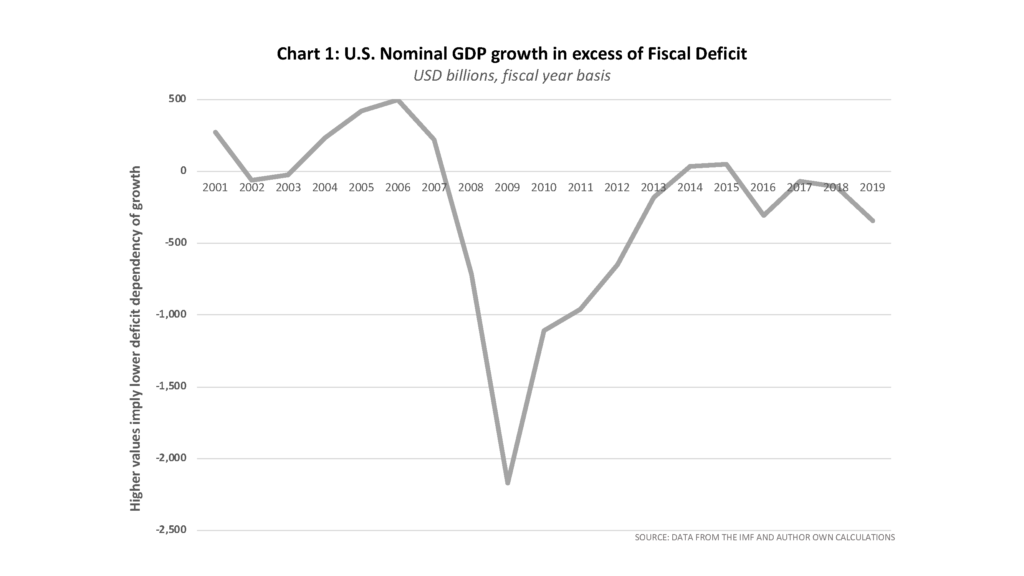 This leaves us at an uncomfortable economic-policy junction: the US economic expansion since the end of the Great Recession has been driven by a combination of an unprecedented monetary expansion underwriting a record-breaking pro-cyclical fiscal stimulus. Not surprisingly, this reality has weighed heavily on the US bond market—ground zero for all large-scale financial experimentation—and especially so at the shorter end of the maturity curve.

Now, consider what has been happening in the short-term interbank lending (Chart 2). 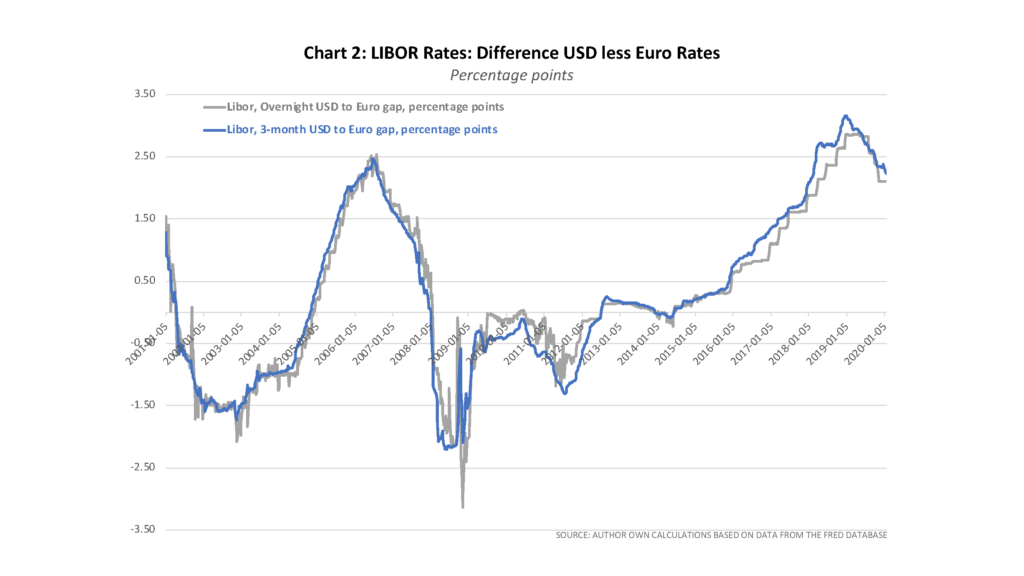 US Treasury securities (Treasurys) set the benchmark for commercial and bank debt pricing through two main channels: firstly, through the demand side of bond markets. They also set base rates for pricing sovereign debt in other currencies, and as such, demand and supply forces in US Treasury markets influence the cost of capital around the world.

Historical evidence shows that private-sector demand for US Treasurys rises at times of increased economic uncertainty, accelerating into economic downturns and financial crises. Rising US Treasury prices are associated with rising yields in interbank markets, increasing liquidity risks in risk-asset markets and shifts in the investor-sentiment cycle from a risk-on to a risk-off regime. The opposite happens in times of abating economic uncertainty.

In other words, deficit-driven increases in the US Treasury supply can be more easily absorbed by market demand during times of economic uncertainty, volatility or downturns. The opposite takes place in a normal expansionary cycle. And both of these counter-cyclical effects are reinforced by the capital-rules regimes applying to the major financial institutions, such as banks, insurance companies and pension funds. Capital rules require increasing demand for US Treasurys (and other government bonds) at times when systemic risks, including the risk of recession, increase and/or when markets reprice the value of risky assets to the downside.

In line with this logic, short-term interest rates on offer in the interbank markets have effectively followed monetary-policy expectations roughly through the end of 2018 but then suddenly switched to pricing in fiscal-policy expectations. As the federal government’s penchant for fiscal adventurism became more and more clear through 2019, the markets oversupplied interbank debt offers and shrunk demand. Yields in LIBOR markets for US-dollar-denominated debt crashed, as evidenced by the gap between the US Libor rates and the euro Libor rates. The same picture holds for longer LIBOR maturities, too.

The above contextualizes the ongoing fiscal expansionism by Washington into the market context. At every point, the US presidential administration triggered a large-scale supply of Treasurys to the market by busting through the debt ceiling—in 2017 and 2018, interbank liquidity became oversupplied, causing a LIBOR-rate pause against the monetary-policy-consistent trend direction. In 2019, the dam finally burst, and yields collapsed.

In recent months, we have been witnessing a change in the trend in US Treasury yields that first started with the onset of the monetary-policy normalization by the Fed mid-2015. Starting in second-quarter 2015, the Federal Reserve’s total assets, less eliminations from consolidation, started falling as the central bank attempted to unwind its pre-2015 policies. With only a single pause in this process in the first half of 2017, the Fed ramped up its net exits from Treasury markets through second-quarter 2019. And then came a sudden reversal in the trend in third-quarter 2019, followed by a massive jump in net-asset purchases in the fourth quarter, as illustrated in Chart 3. 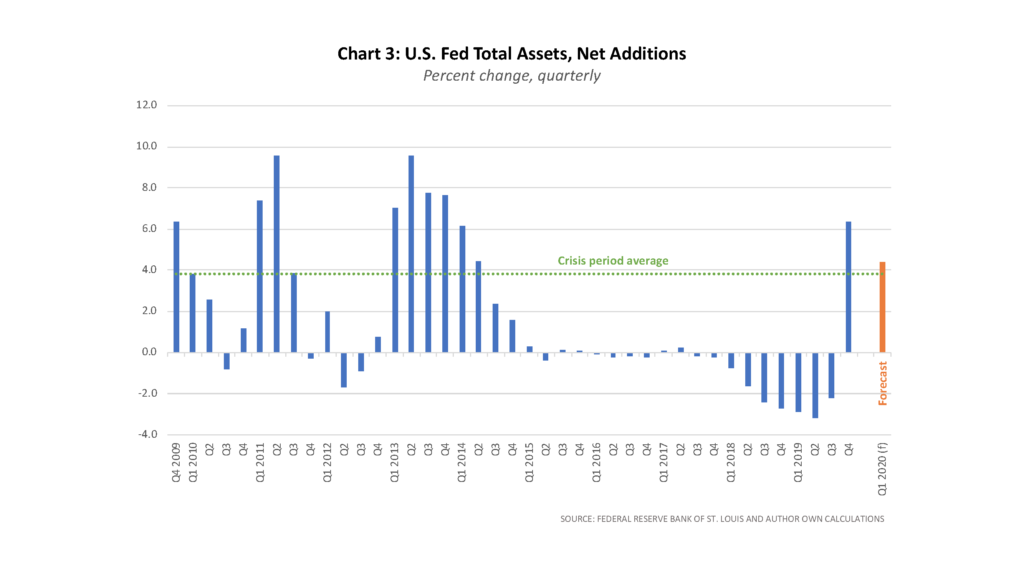 Why? Because the Fed is now openly accommodating the Trump Administration’s demand for liquidity to underwrite growing deficits. And the markets on their own are unable to absorb it.

A tidal wave of new debt issuance by the White House, coupled with the shorter-maturity tenor of the new issues, destabilized money-market yields around third-quarter 2019. Things got so bad that the U.S. Treasury Department started to worry about the potential lack of demand for short-term debt from foreign and domestic investors. This forced the Fed to race to the rescue with liquidity injections and abandonment of its already timid efforts at balance sheet “normalization”. Over the fourth quarter of 2019, the Fed was in a “non-QE” QE (quantitative-easing) mode, injecting $60 billion per month’s worth of cash into the Treasury markets. By first-quarter 2020, this rose to more than $88 billion.

As the latest data suggests, the markets can now expect more fiscal-policy-driven pressure on short-term interbank-lending demand in months to come. Since mid-December 2019, US-dollar-denominated overnight LIBOR rates have been inching upward, having hit bottom during the week of December 13. But the three-month LIBOR is still in oversupplied territory, with yields continuing to drop, as is the six-month LIBOR.

In his October 2019 statement, the Fed’s chairman, Jerome Powell, declared, “This is not QE. In no sense is this QE”. In a way, he is right. QE rounds were launched as the tools for addressing the real economic crisis. The latest measures are doing nothing of the sort. Instead, they are transferring risks from the fiscal imbalances to the financial system.

The magnitude of these transfers matters a lot. In the previous round of QE3 in 2013, the Fed’s policy increased net purchases of assets by 6.3 percentage points compared to the last quarter of QE2, the shift identical to the change from QE1’s end to QE2’s initiation in first-quarter 2011. In fourth-quarter 2019, Powell’s “not QE” increased net changes in the Fed’s balance sheet by a gargantuan 8.6 percentage points—signaling a sharper policy reversal of any prior post-crisis measures.

The Fed is now the main, if not the only, factor sustaining the demand for US Treasurys. Based on the trends covered earlier, the Fed is also underwriting US economic growth via both the monetary channel (via depressing the cost of capital and making legacy debt accumulated by companies and households financially sustainable) and the fiscal channel (via monetizing federal deficits).

Over 2019, foreign investors bought some $550 billion worth of US debt, more than at any time since the end of the global financial crisis (GFC), as federal debt rose by more than $1.2 trillion. US banks, in the meantime, have expanded their Treasury holdings at a higher annual rate than in any year since 2010 (Chart 4). 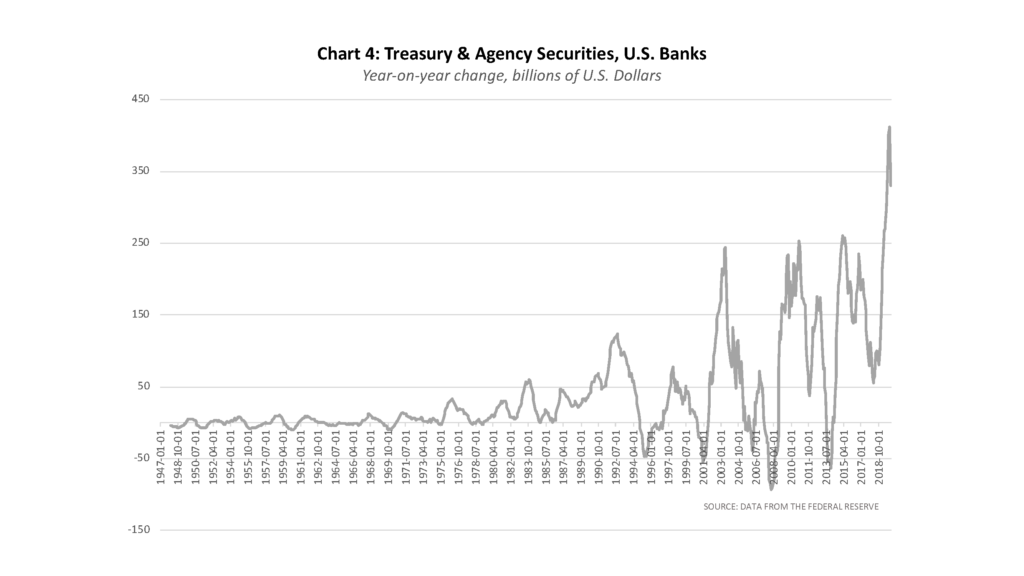 Even with this demand, the Fed still had to step in to monetize the balance for which private-sector buyers did not bid. Since then, matters have gone from bad to worse. In January, the Fed mulled the possibility of extending monetary subsidies to hedge funds to support their demand for short-term debt. The key reason for this is that banks can no longer absorb simultaneous increases in new Treasury issuance and the excess supply of short-term debt in the money markets generated by the reserve requirements.

The Fed’s actions are providing risk subsidies to the banks’ holdings of government debt. Absent the Fed’s “not QE” measures, US Treasurys should be trading at yields that are between 100 and 150 basis points above their current level—which would imply a bond-valuations correction of some 30 percent to the downside. In 2019, US banks increased their holdings of Treasury and agency securities by $330.9 billion, with the rate of additions accelerating in fourth-quarter 2019. Repricing this debt to remove the Fed supports would cost the US banking sector some $100 billion in risk buffers.

From 2008 to 2013, US monetary and fiscal authorities have underwritten the larger banks under the premise that these institutions were “too big to fail” without crashing the economy. In 2020, we are about to add hedge funds and private-equity firms to the list of systemically important “institutions”. This really is not a picture of an economy in rude health.

Back To Top
ABOUT THE AUTHOR
Constantin Gurdgiev is Associate Professor of Finance with Middlebury College, Middlebury Institute of International Studies at Monterey, Adjunct Professor of Finance with Trinity Business School, Trinity College Dublin and the Presidio Graduate School. Research-active in the fields of financial-markets analysis, and macroeconomic and systemic risks and uncertainty. In the past, he served as Partner and Head of Research with St. Columbanus AG, Head of Macroeconomics with IBM Institute for Business Value and Director of Research with NCB Stockbrokers.
BankingBarack ObamaConstantin GurdgievFinanceGreat RecessionIMFMiddlebury Institute of International Studies at MontereyMonetary PolicyMonetary Policy Committee (MPC)Trinity College DublinUS Department of the TreasuryUS Federal Reserve
0 comment
0
FacebookTwitterPinterestEmail
previous post

Building a Human Firewall Against Cybercrime

What Are the Main Goals for Central Banks...

Customer-Experience Goals for the Banking Industry in 2021

Growth Sectors for Investors to Consider in 2021

Does Embedded Finance Pose the Biggest Threat to...