Top Posts
Challenges Remain, But There Are Opportunities to Be Had in...
Interview with Mr. Olukayode Pitan, Chief Executive Officer and Managing...
Commodities Outlook for 2023
The Value of Cash in a Time of Crisis: How...
The US-Africa Leaders Summit: Fostering a Closer Relationship with the...
Three Key Sectors in Which to Invest in 2023
Home Finance Better Once Than Never, For Never Too Late: The Emergence of Remote Work
Finance

Better Once Than Never, For Never Too Late: The Emergence of Remote Work 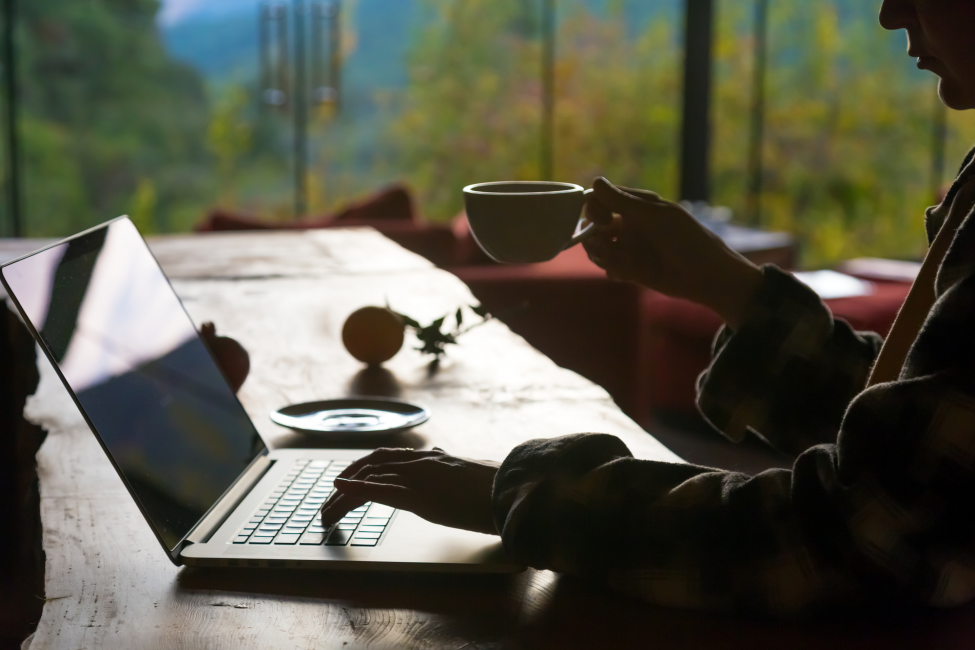 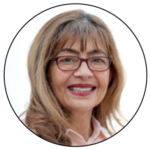 The proliferation of digital communication technologies, particularly the emergence of mobile connectivity with the smartphone in 2007, has empowered workers with professional flexibility. But it was the COVID-19 pandemic that ignited the remote-work phenomenon, liberating many from the exigencies of the daily commute. These are workers, digital nomads, who can work anywhere, anytime and, therefore, can travel with their work rather than travel to their work. Aided by many existing technologies that had supported virtual collaboration and communication, the work-away-from-office phenomenon became the new work-life pattern. Professionals (and employers) across the globe became aware of the irrelevance of being physically secured to their desks and offices—or any centralized location. They could imagine a lifestyle by which they worked remotely from home or vacation locations, such as Aspen, Colorado, or Jackson, Wyoming.

Workers have embraced this new form of organization in pursuit of more autonomy, flexibility and excitement in the context of work. High quit rates in the United States in recent years lend support to this model of digital nomads who switch jobs and positions to sustain their remote lifestyles. Companies have taken note of this new awareness and implemented policies that allow for remote and/or hybrid workforce models in accord with employee preferences. These models might increase worker wellbeing, and hence productivity, and reduce overhead costs for the business.

In 1997, the term digital nomad was introduced by Tsugio Makimoto and David Manners as a prescient prediction of the impact of mobile technologies on people’s work-life choices. They hypothesized that mobile technologies would enhance work and leisure in a new lifestyle, whereby “people are freed from constraints of time and location” and can work remotely1.

Paradoxically, prior to the pandemic, the remote-work model of business organizations was not ubiquitous, as shown in Figure 1, and as calibrated by travel time, shown in Figure 2. This measure, travel time to work, continued to increase in the US for both men and women. From 2006 to 2019, the mean travel time increased by 10 percent from 25 minutes to 27.6 minutes2. (Travel time refers to the total number of minutes per day normally devoted to moving from home to work—i.e., one-way commuting time. This includes time spent waiting for public transportation, passenger pickups in carpools and any travel-related activities. The mean travel time is obtained by dividing the total number of minutes by the number of workers 16 years or older who did not work at home on the reference date.) 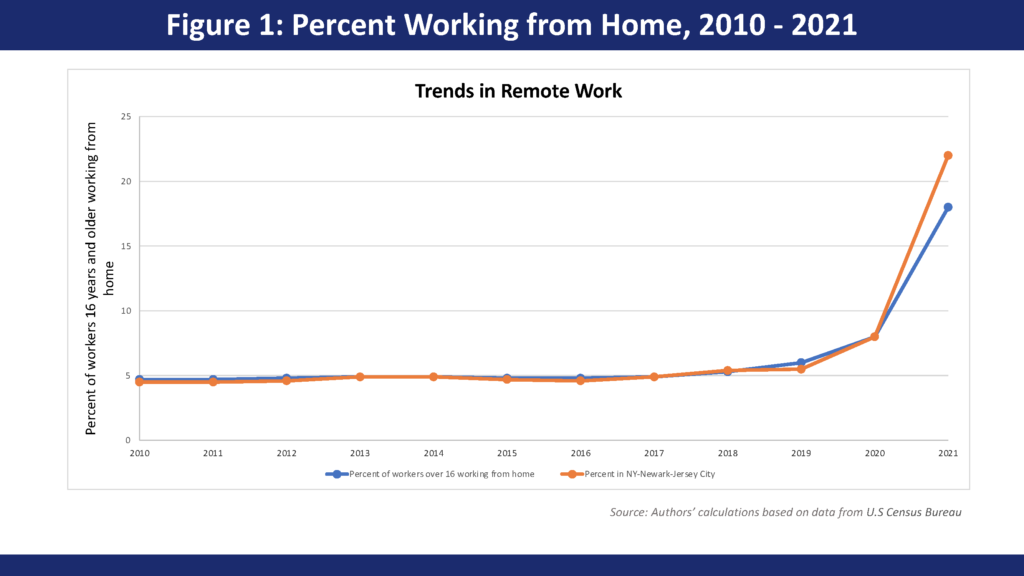 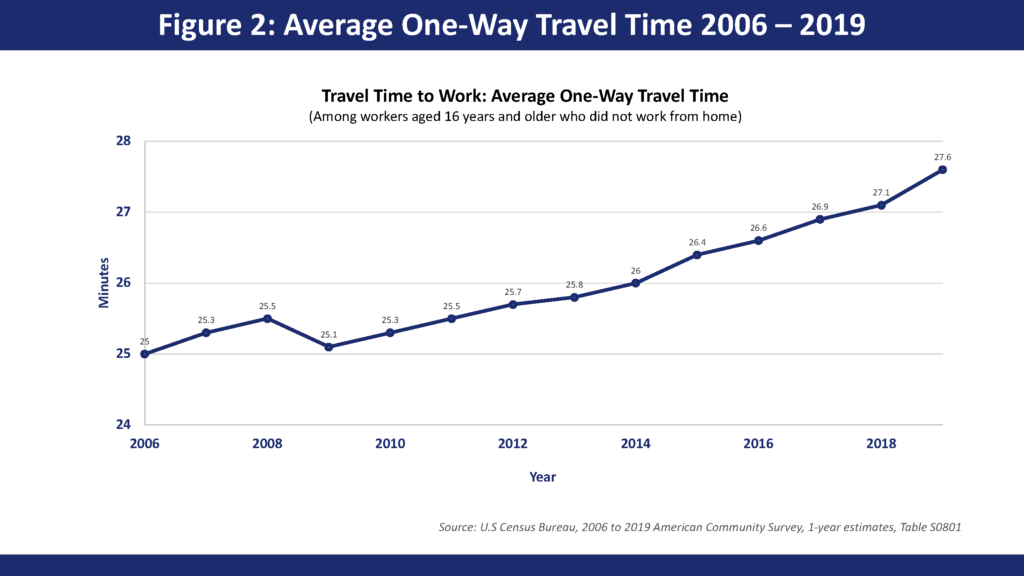 Starting in 2020, the pandemic broke this trend in commuting time by igniting the remote-work phenomenon. The percentage of workers working remotely rose from 5.7 percent in 2019 to 17.9 percent in 2021 [Figure 1]. Then travel time in 2021 dropped to 2010 levels [Figure 3]. The correspondence between population density and travel time suggests that workers in dense urban areas likely occupy high-skilled jobs in sectors such as finance and insurance, real-estate renting and leasing, and professional and business services. Recent work by José Maria Barrero et al. indicates that firms in these sectors are more likely to expand work-from-home opportunities to moderate wage pressures and keep workers happy3. In such jobs, collaboration with other workers and connection to the head office can be efficiently shifted to the digital space, putting the brakes on travel time. 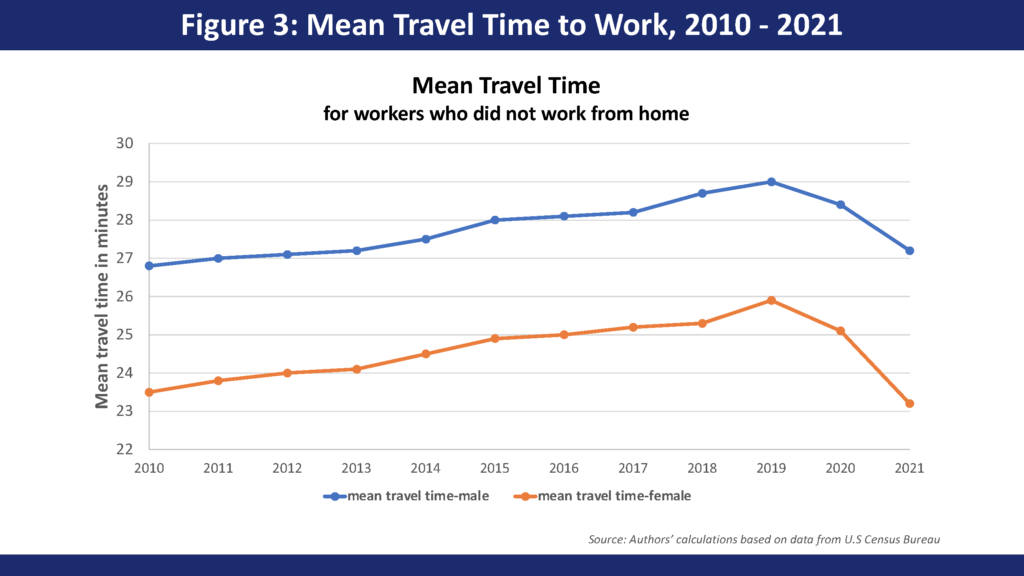 As a fortuitous side effect, remote work offers compensation in the form of non-pecuniary benefits, such as flexibility in work patterns, which can substitute for higher wages. In May 2022, US consumer prices rose 8.6 percent year-over-year, a steep rise relative to previous years, and Barrero et al. made the case that the amenity value of remote work offsets some of the wage pressures promoted by workers bargaining for larger shares of income3. The amenity value includes time and cost savings due to remote work, such as reduced commuting costs, more flexibility and personal autonomy. The compensation package includes tangible benefits, such as salary and benefits, as well as intangible components, such as the amenity value. To the extent that these intangibles substitute for tangible dollars, there is some restraint on wage growth and, correspondingly, inflation.

Reinforcing this move into the virtual world is independent workers’ choice of home for work location. Propelled by mobile communications technologies, their choice of home might be such that commuting time is no longer a consideration. Many individuals believe that absent the reliance on work in a conventional office, the decision of when and where to work is unconstrained, as long as they have their laptops with them and access to good internet connections.

According to Paul Krugman, “the pandemic-induced rise in remote work led to a demand for more space at home”, prompting a rise in home values4. [Figure 4] Researchers at the Federal Reserve Bank of San Francisco found that “the shift to remote work explains over one half of the 23.8 percent national house price increase” since late 2019. These empirical results support the belief that remote workers have moved to locations further from city centers in their quests for larger homes5. 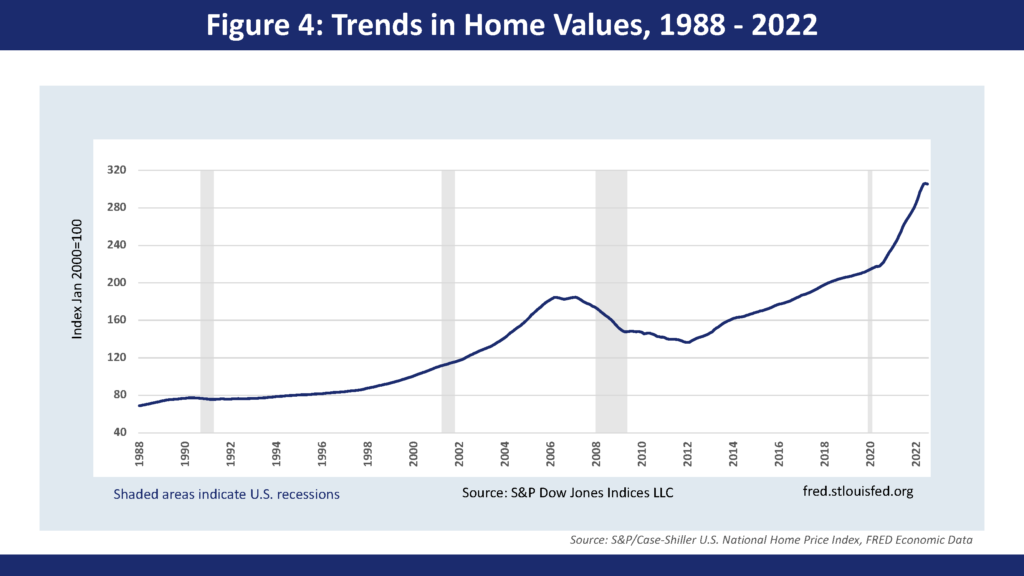 Why did the work-from-home or remote-work model surface only during the pandemic when the technologies for its implementation already existed and its benefits were apparent? The answer lies in two adverse incentives. First, most work requires the coordination of both timing and venue of interaction between employees with different skill sets. When most employees share a location, the process is completed with little friction. If a front-line employee observes changes in buyer behavior, he or she can communicate this information simultaneously and with multiple feedback possibilities in an in-person meeting with all salient staff and management. Online meetings were considered the final step in bringing a resolution to the discussion. Second, there is the issue of monitoring. In an employer-worker relationship, the former delegates work to the latter with the understanding that it will be completed in a timely manner according to the terms of the worker’s contract. If the workers are off the premises, how is the employer assured that these employees are actually committing time according to the prescribed agenda? Suppose, in reality, the staff are eating al fresco in the park.

Today, these two problems of coordination and monitoring can be solved simultaneously by videoconferencing technologies such as Zoom, Microsoft Teams, GoToMeeting, Google Meet, among others. But videoconferencing technology has existed since the mid-20th century6. The telecommunications monopoly at the time, AT&T, supported video-telephone research at its Bell Laboratories in 1956. In April 1964, it introduced the Picturephone at the New York World’s Fair. Visitors could make their own video-telephone calls, some to individuals in Disneyland, California. The Picturephone failed for the simple reason that the value of owning such a device depended on the number of other users; as with the proverbial chicken-and-egg problem, the question of which consumers would enter the market became ambiguous. Seeing few owners, potential consumers balked.

The potential market, businesses and consumers, did not see how videoconferencing would solve the problem of coordination and monitoring. The technology was publicized as an additional business tool rather than a virtual substitute for terrestrial meetings. Few saw the benefits of non-office interactions, especially via videoconferencing.

Then, in March 2020, the World Health Organization (WHO) announced the start of the pandemic and that everyone had to stay in place at home. This shock to the economic-trading network ignited a response; it was a wake-up call to dive deep into the technology toolbox for anything that might salvage the economic interactions so easily facilitated by the work-in-the-office environment. And so, we all got onto Zoom and remote work.

In sum, while the phenomenon of remote work was predicted more than 20 years ago, it has only just been realized in business organizations. The force of the pandemic sparked the work-from-home phenomenon, initiated a concomitant increase in home values and reversed the increase in commuting time observed from 2006 to 2019.

It is quite possible that remote work is a passing phenomenon. The “digital nomad” idea of freedom, represented by an imagined lifestyle of tensionless work, leisure and mobility, quickly fades upon the realization that, in fact, remote work requires a culture of personal responsibility, discipline and self-disciplining practices such as time management to separate work and leisure time and task-prioritization to instill focus. Digital nomads’ smartphones embody “coercive time-management technologies” that make the employee a “worker/smartphone hybrid”. In an awkward paradox, “digital nomads start out attempting to collapse work/leisure distinctions so they can experience autonomy, flexibility and more leisure time but often end up laboring hard to compartmentalize work and leisure so that work doesn’t take over completely”7.

The article’s title was inspired by a quote from William Shakespeare’s The Taming of the Shrew, Act 5, Scene 1, in which Petruchio invokes two proverbs: “Better late than never” and “It’s never too late to change”.

7 Information Technology and Tourism: “The freedom trap: digital nomads and the use of disciplining practices to manage work/leisure boundaries,” Dave Cook, 22, 355–390, March 12, 2020.