Top Posts
Challenges Remain, But There Are Opportunities to Be Had in...
Interview with Mr. Olukayode Pitan, Chief Executive Officer and Managing...
Commodities Outlook for 2023
The Value of Cash in a Time of Crisis: How...
The US-Africa Leaders Summit: Fostering a Closer Relationship with the...
Three Key Sectors in Which to Invest in 2023
Home Finance Bhutan: The World’s Fastest-Growing Economy
Finance 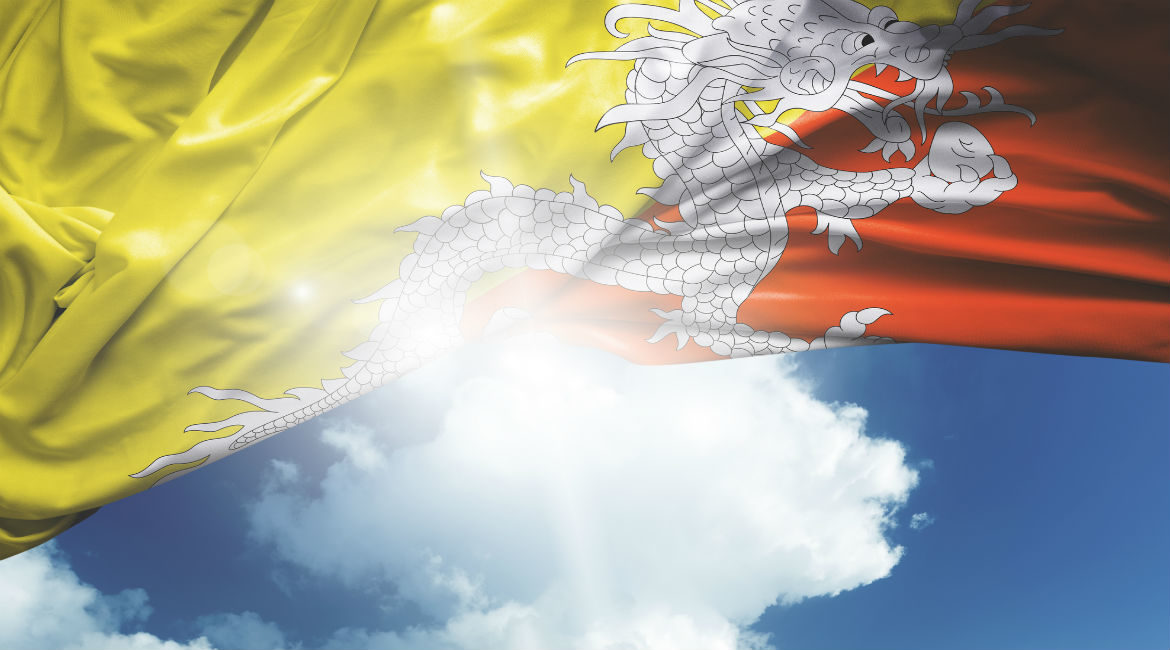 When considering the world’s fastest-growing economies, the usual suspects of China and India invariably crop up in most discussions. Of course, this is to be expected given that, despite its recent slowdown, China’s GDP (gross domestic product) still grew by 6.7 percent in 2016; India’s economy, meanwhile, expanded by 7.4 percent in 2016. However, there is one country geographically sandwiched between those two Asian economic heavyweights that is now being touted to grow more quickly than both of them during the coming years, as well as every other country in the world: the Kingdom of Bhutan.

Arguably it’s the Gross National Happiness (GNH) framework that Bhutan utilises to measure socio-economic development for which it is most well-known throughout the world. The measure is one that King Jigme Singye Wangchuck decided in the 1970s was more important than the traditional gross domestic product as an indicator of the country’s development. That’s not to say, however, that it ignores GDP; on the contrary, Bhutan’s GDP growth over the last few years has been mostly brisk to say the least: 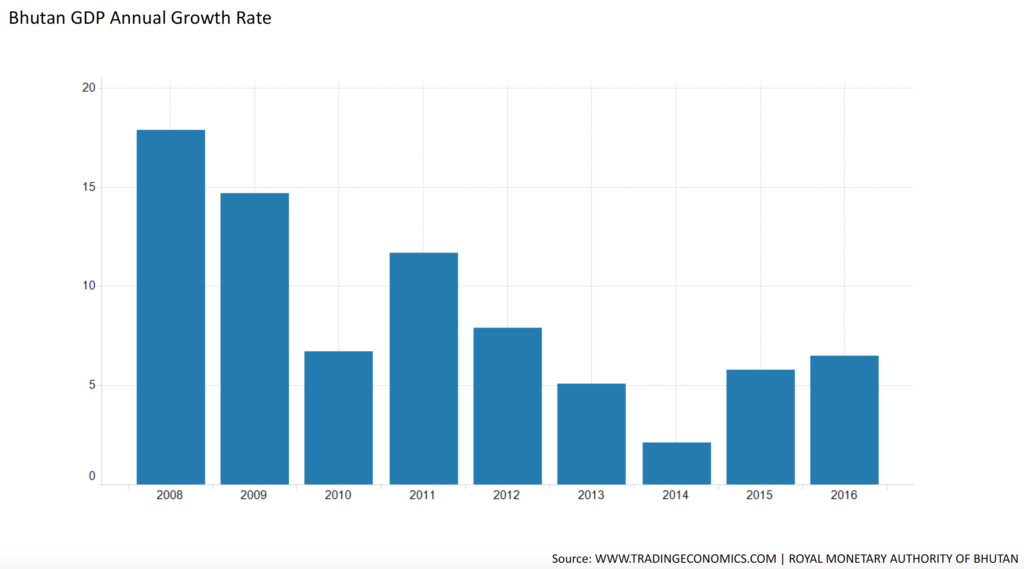 Furthermore, the projections over the next few years are for a significantly higher growth rate to transpire. Between 2017 and 2019, the GDP of Bhutan is expected to grow by a yearly average of 11.1 percent, according to forecasts from the World Bank’s Global Economic Prospects, which was published in January. This puts the diminutive South Asian nation at the top of the pile of the world’s fastest-growing economies, and ahead of the likes of Ethiopia (which is expected to grow at 8.7 percent over the same period), Ghana (8.1 percent), Côte d’Ivoire (8.07 percent) and India (7.73 percent).

The main assumption upon which forecasts of Bhutan’s upward growth trajectory are being made is that the country fulfils its enormous potential for hydropower generation. Given that the country’s location lies almost entirely across mountainous terrain in the heart of the Himalayas, its options for developing infrastructure are somewhat limited. As such, it has turned to alternative sources to generate growth, development and prosperity, with the hydropower industry and, to a lesser extent, agriculture and forestry being its key drivers today. Indeed, the past fiscal year saw hydropower accounting for 32.4 percent of the country’s total exports and 8 percent of its GDP, with the recent construction of three projects in particular helping to push GDP growth to 6.5 percent last year.

Predictions from a range of institutions, including the Asian Development Bank (ADB), are for several hydropower-investment projects to be undertaken in the Kingdom for export (almost exclusively to India) during the coming years. According to the South Asian Association for Regional Cooperation (SAARC), Bhutan has as much as 30,000 megawatts (MWs) of hydropower-generating capacity, of which only about 5 percent has been developed thus far, although the Bhutanese government is intent on generating 10,000 MWs by 2020. The ADB’s recently released Asian Development Outlook 2017 report sees GDP growth rates increasing on the back of investment in several major projects that are due to commence in the near future. In the words of ADB’s country director for Bhutan, Kanokpan Lao-Araya, “this activity of supply side investment going on in the country will boost the economy in the country, and the inflation rate in the next few years is expected to be lower”.

Challenges to Bhutan’s economic sustainability are emerging, however, not the least in housing. Thanks to accelerating population growth within the country, coupled with increasing urbanisation rates, a growing housing shortage in urban areas has started to emerge. According to the ADB, housing makes up the biggest area of exposure for banks, with housing loans having accounted for “nearly one-quarter of total bank lending” by last September. Most of these loans are provided to developers of apartment blocks and then rented to tenants, meaning that such properties are owned by a limited number of landlords. As such, Bhutan has a large dependence on the rental market for housing—only 17 percent of households own homes in urban areas—which in turn prevents families from amassing equity in their homes, unlike most other countries. According to the ADB, therefore, Bhutan “needs a comprehensive national land and housing policy that would provide a framework for urban development and housing”.

What’s more, despite hydropower being technically considered a renewable energy, the generation of hydroelectricity is a major source of greenhouse-gas emissions. A recent study by Washington State University found that methane constitutes 80 percent of emissions from water-storage reservoirs created by dams, with the gas itself being at least 34 times more potent than carbon dioxide. According to the study’s lead researcher and US Geological Survey research ecologist Bridget Deemer, the study shows that “dams as a source of energy aren’t without their greenhouse gas costs….Even though it’s a renewable source of energy, people should keep the greenhouse gas side of the picture in mind when making planning and policy decisions regarding dams”. Furthermore, Bhutan’s finance secretary, Lam Dorji, has previously stated that climate change and reduced winter snowfall is having an adverse effect on the flow of Bhutan’s glacier-fed rivers and is prepared for the future possibility that the water flow “would be reduced to an extent that we may not be able to make use of it”.

Going forward, one of the biggest priorities the country faces is to ensure that it is not overly reliant on hydropower. The world has repeatedly witnessed countries face massive financial headwinds due to their lopsided reliance on a single commodity or sector, particularly in the wake of the recent collapse of global commodity prices. Back in 2014, Prime Minister Tshering Tobgay exclaimed to the Financial Times that “hydropower is a gift, a boon. It’s not a curse. Right now our economy is so weak and so small that all I can say is ‘Thank heavens for hydropower’”. Given the growth rates experienced more recently by the country, diversification of its economy will likely become a bigger priority for the government; indeed, plans to diversify farm production from its staples of rice, potatoes, corn and apples into hazelnuts, coffee and organic vegetables are already in place.

In the meantime, the ADB asserts that Developing Asia is the “single largest contributor to global growth”, and Bhutan is the fastest-growing economy of them all. For the time being, this should at least give a country, which famously places unrivalled value on happiness, something to smile about.