Top Posts
Tesla Job Cuts Reflect Precarious Health of Global Economy
Artificial Intelligence is the Future of the Banking Industry —...
Why Taiwan is Pivotal in Ongoing Global Geopolitical Tussles
Is an Impending US Recession Now All but Guaranteed?
What is Driving Customer Centricity in Banking?
Near-80 Percent Inflation Exposes Turkey’s Grave Economic Mismanagement
Home Finance Brexit, Trade and Trade Finance: What Do We Know?
Finance

Brexit, Trade and Trade Finance: What Do We Know? 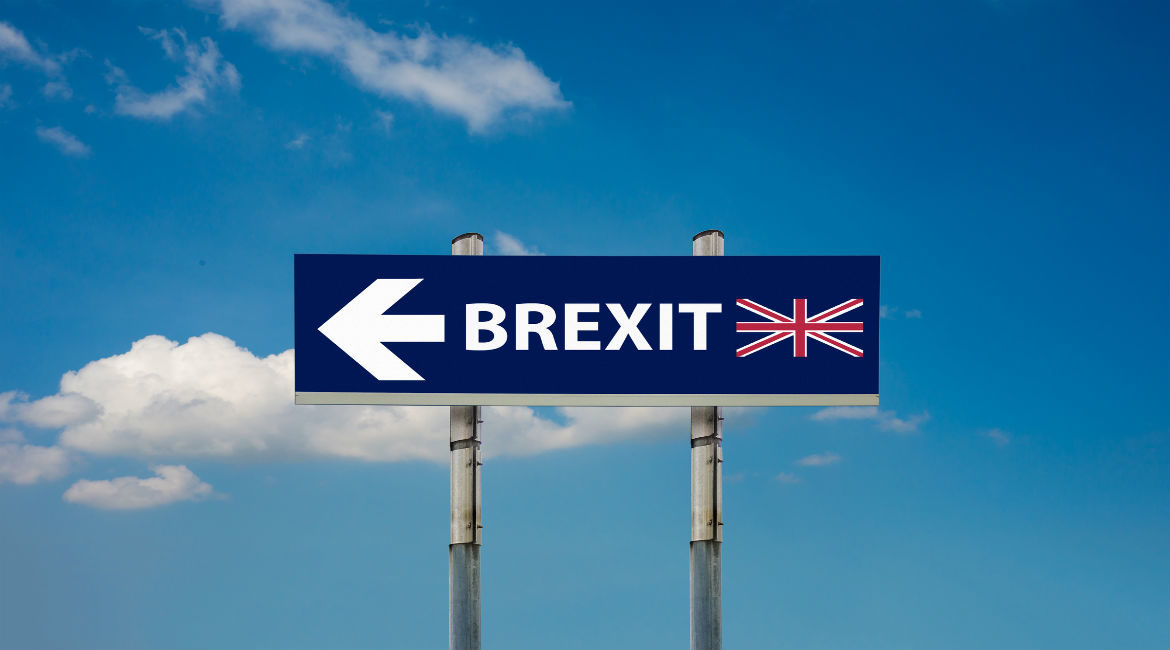 There is a lot we don’t know about Brexit, the most unknown of which is what trade and trade finance will look like after the United Kingdom leaves the European Union. What we do know is that trade itself has changed over the past five years; supply chains have become shorter, and, as a result, global trade has ceased to grow at two times the rate of gross domestic product (GDP) (Figure 1). 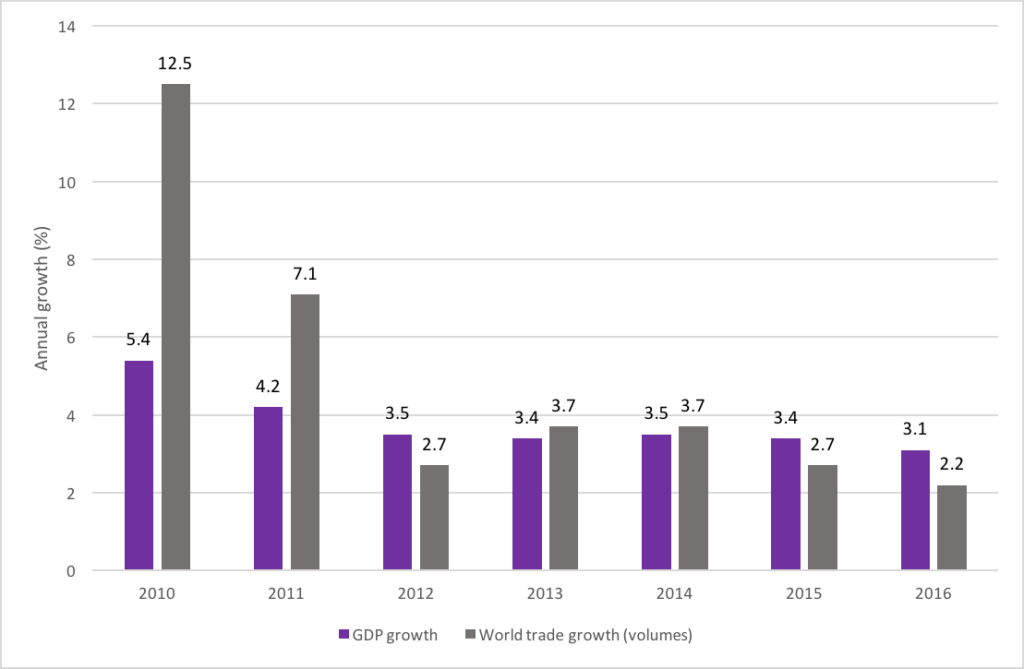 The assumption that this rate of growth was an economic “law” underpinned much of the thinking in trade and receivables functions within banks. In 2010 and 2011, substantial effort was put into facilitating trade finance, particularly in emerging regions within which recovery from the global financial crisis had been so rapid and substantial.

That trade has failed to maintain that growth has called into question many things: at the top-line level, it questions the role of trade in global GDP growth and the effectiveness in the post-crisis era of macroeconomic policies to promote export-led growth. Low interest rates and quantitative easing have created a liquidity boom that, particularly in Japan and the United States, has failed to translate into higher levels of exports. China’s reorientation towards demand-led growth has failed to fuel exports in other countries through substitution effects.

For banks, the problem is that the macroeconomic, specifically monetary, environment has put pressure on yields. Although liquidity is high, the yields on trade finance are low, and as regulations have tightened, this has put pressure on banks to—in the words of one trade-finance professional with whom I spoke—“get more out of less”. In other words, existing large corporate relationships that are high value, low risk and fully understood are more likely to meet Basel III and KYC/AML (know your customer/anti-money laundering) considerations, with the result that emerging economies and SMEs (small and medium-sized enterprises) are increasingly squeezed out of the sector.

The second thing that we know is that trade finance is a big market, but it, too, is changing. Globally, bank-intermediated trade finance (BITF) is worth around $6.7 trillion. However, for the last five years, according to SWIFT (Society for Worldwide Interbank Financial Telecommunication) and the ICC (International Chamber of Commerce), the letters of credit (LC) market has declined, particularly in Africa, where the risks around AML and KYC are seen as greatest. Digitisation and alternative finance have not dented the traditional market as such but have provided a means for improving efficiency and “reaching the parts that banks cannot reach”, in the words of one senior banker. The net effect, however, has not been to increase trade finance but rather to provide mechanisms for de-risking and providing finance to tighter markets (Figure 2). 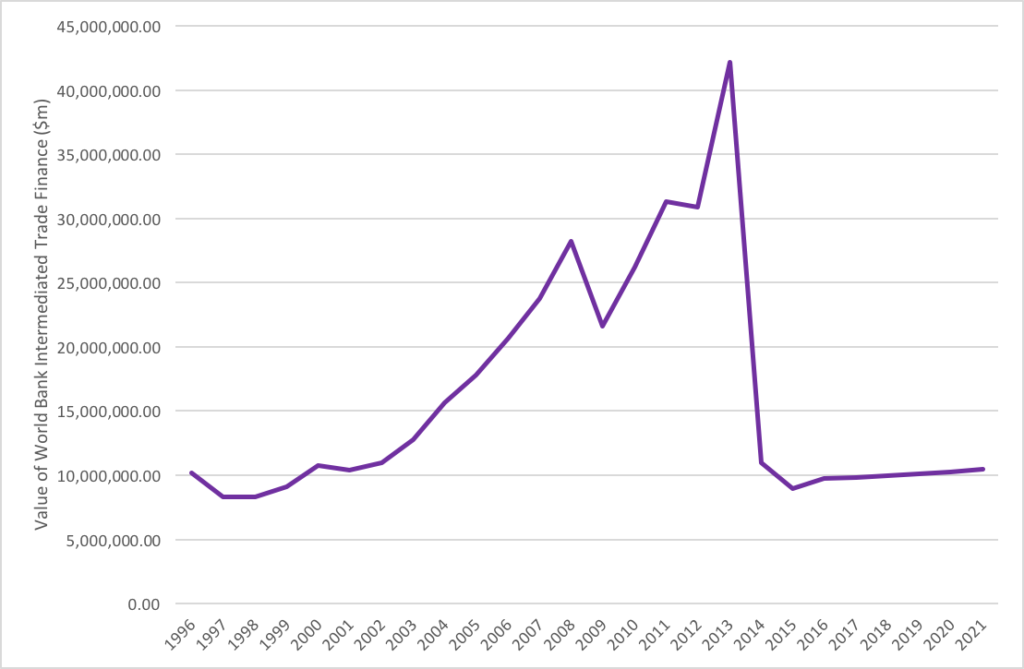 2015 was a particularly tough year because of the collapse of commodity prices, but while there may be some recovery into 2017, Figure 2 does not suggest a major pickup in the market. The inference from this is that the trade-finance market itself is changing and becoming more focused on bigger deals. This will have the effect of squeezing out smaller companies and trade with emerging economies.

The third thing we know is that this should be the backdrop to the negotiations around financial services and trade during the Article 50 process but won’t be discussed in all likelihood until the terms of the divorce settlement are reached. The future of trade, including the future of financial services, is not going to be part of the negotiations, but across Europe and beyond, trade and its finance is changing so much that it should at least be considered every step of the way.

At this point, the discussion inevitably becomes speculative, not least because we do not know what type of transitional arrangements will exist after the Article 50 process is completed; we do not know what type of deal will be reached for financial services; and the complexities of the trade negotiations at an industry or sectoral level are so substantial that they could take years to work through. How long they will take, again, no one knows.

We do know what the risks are, and we do know the trend projections for financial-services trade now (Figure 3). 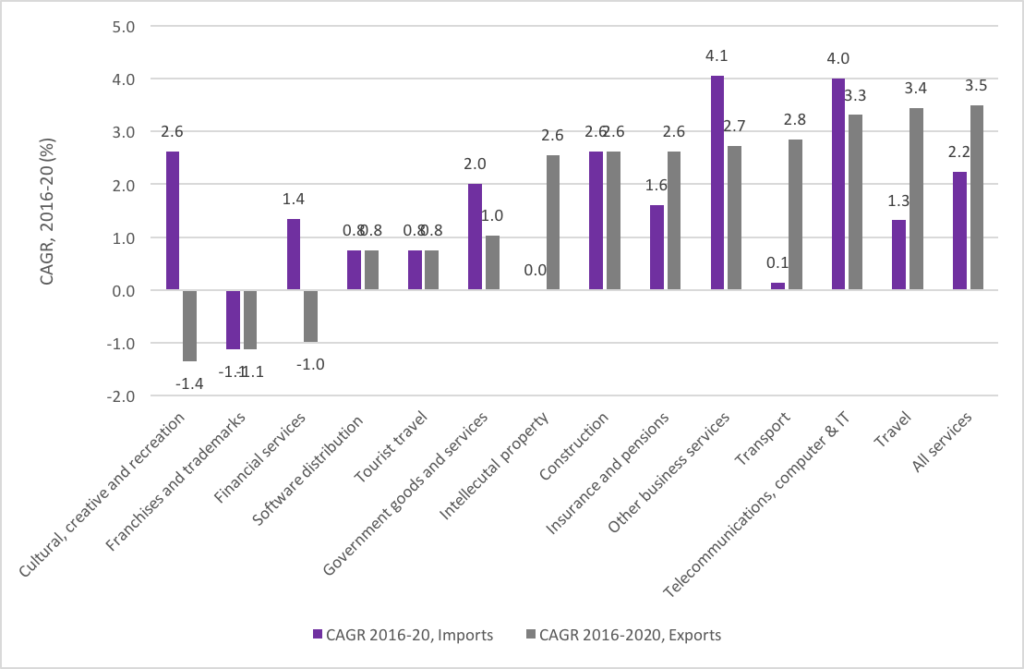 Figure 3 suggests that financial-services exports are set to fall back over the next three years. This is based on historical-trend projections with no assumptions about what the outcomes of Brexit might be.

Already there are signs that the market is making its own choices. Euro-clearing looks set to move out of London, as are jobs, and the splitting of cost centres—the result of subsidiarisation of banking functions across Europe, which will inevitably increase costs for the sector. Much of the $250 billion or so of trade finance that is intermediated through London could as easily be intermediated through, say, Amsterdam; and although there are no clear signs that this will happen, there is an obvious risk that it might. Similarly, the growth of open-account trade finance means that banks themselves may find themselves displaced by corporates (including the likes of DHL, Amazon and Google) because of the need for swifter supply-chain finance to counter any customs and excise complexities as tariffs are imposed.

Brexit means Brexit, and while every attempt will undoubtedly be made to ensure that the process is smooth, there is scope for complexity and additional risk that, given the current market fragility, may well be unhelpful. These are considerations that policymakers should have at the back of their minds as they begin the process of negotiating through the Article 50 process. It should not wait for a deal to be done.