Top Posts
Western Banks Willing to Accept the Short-Term Pain of Russian...
Why the US Is Ramping Up Its Presence in Somalia...
How Technology Is Helping to Solve Global Supply-Chain Issues
UK Inflation Climbs to Fresh 40-Year High
Extended Reality and the Metaverse Are Leading Financial Services into...
Digital Currency: India’s Move Towards a Digital Financial System
Home Finance China and its Impact on Equity Markets and on the G3 Economies
Finance 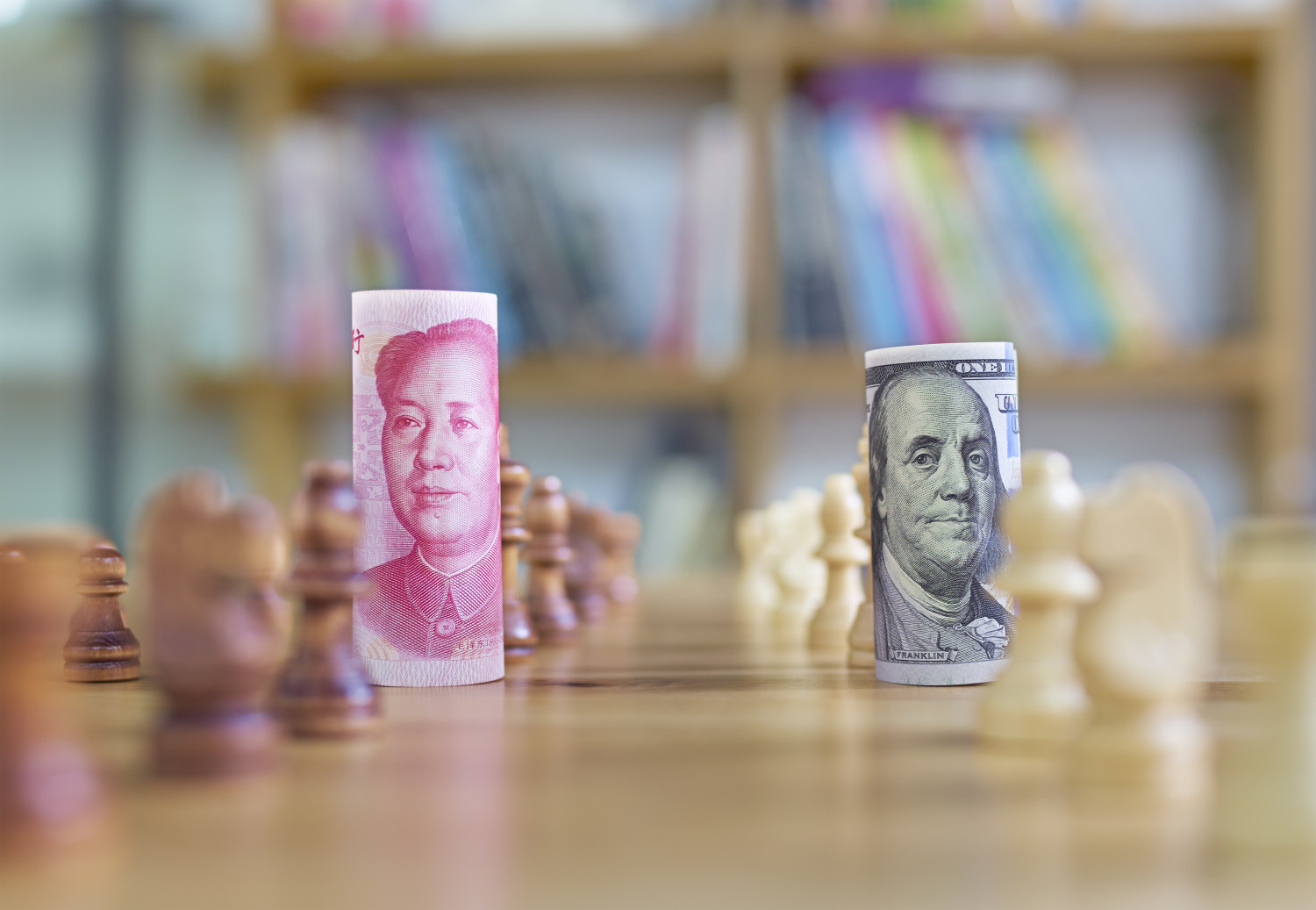 The two “devaluations” of the CNY (Chinese yuan renminbi) in August this year triggered successive falls in global equities for reasons that lack support from facts. This is not about Ecognosis “knowing better”, but it is about facts and not forecasts. The “devaluation” (note the inverted commas) caused the market to believe that China’s economy was in far worse shape and, hence, would drag the global economy further down, since China is “the main locomotive of growth for the G20, let alone for Asia”. None of these notions are fully based on facts, but what matters here is what equity investors believe to be the facts.

The Chinese equity market has a lot more to fall, possibly back to SHCOMP (Shanghai Composite Index) 2500 where it all started. China is a closed market, the fall of which will have little impact on global portfolios as foreign ownership of Chinese shares is a small percent of its market capitalization. The equity crash may have a modest macro impact in China. Investors should keep clear of Chinese and Hong Kong equities until the first quarter of 2016, when China’s cycle may have bottomed. The likely insanity of a Fed hike, although we do not expect one in 2015, even after September’s pause, would argue a move to cash for now in most markets.

China in a G3 perspective; points to consider

Point 1: China’s economy has been continuously decelerating for the last 6 (SIX!) years, 2010-2015. During this time, its equity market declined almost continuously, and its explosive rise at the end of 2014 was completely unconnected to GDP growth, which had continued to fall (see Figure 1). Why did global investors notice only now that China’s economy was slowing down? Why did they decide that the Chinese equity crash was likely to detonate another global 2008-09? 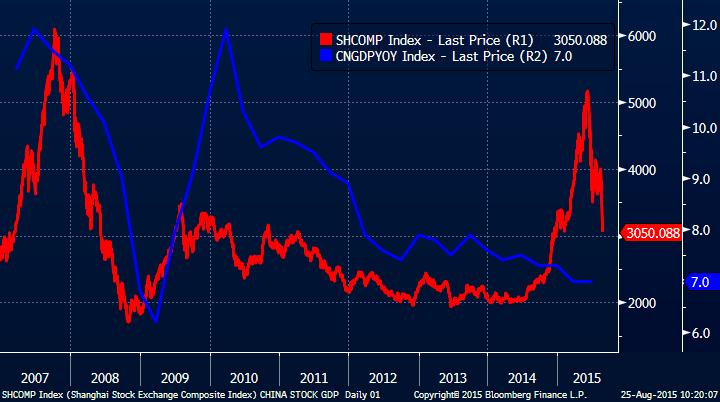 Point 2: China’s contribution via its imports to the growth of the G3—the

US, European Union (EU) and Japan—is limited. China is not the growth driver of the G3 let alone of the G20 economies. Exports to China account for less than 10 percent of total exports from the US and the EU, and the total net export contribution to GDP growth (which includes the exports to China), on average, subtracts from the US’s growth and adds nothing to EU’s (see Factbox). For Japan, its exports to China account for nearly 20 percent of the total, but here, too, net exports make a negative contribution to GDP growth. Let it be noted that the analytics of the net-export contribution to GDP growth can be misleading under certain circumstances. For example, imports can add to investment thus adding to growth. The deceleration of China’s growth will have a modest impact on the G3. 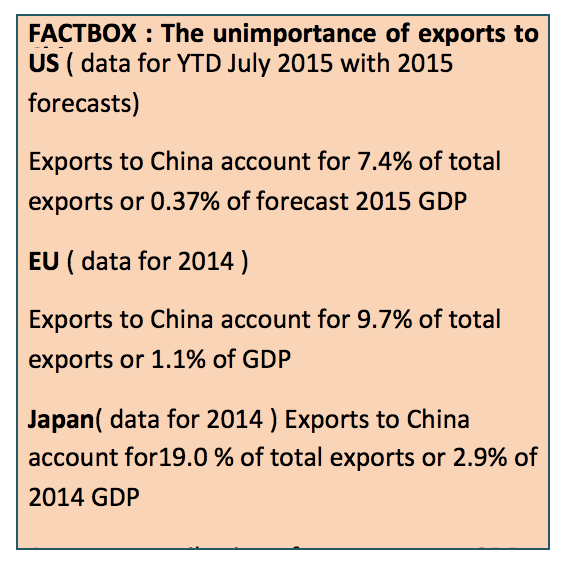 However, it will continue to have a significant negative impact on the economies of commodities exporters such as Australia, Canada, Brazil, Argentina, Uruguay and Russia, but this is hardly the “global economy”. Similar considerations hold for the economies of Hong Kong and Taiwan, but here, again, the impact is regional and not “global”.

Point 3: The 3-percent devaluation of the CNY during August caused another major fall in global equity markets on the basis of the unfounded expecations that the economy of China was in dire straights and in need of a boost from exports. Be noted that since 2005, when the CNY was effectively unpegged from the USD, the CNY appreciated, on average, by 2.2 percent per annum. China‘s growth is also not dependent on exports, as the data in Figure 2 shows. The devaluation was an extremely poorly timed, further attempt at liberalisation of the foreign exchange market. 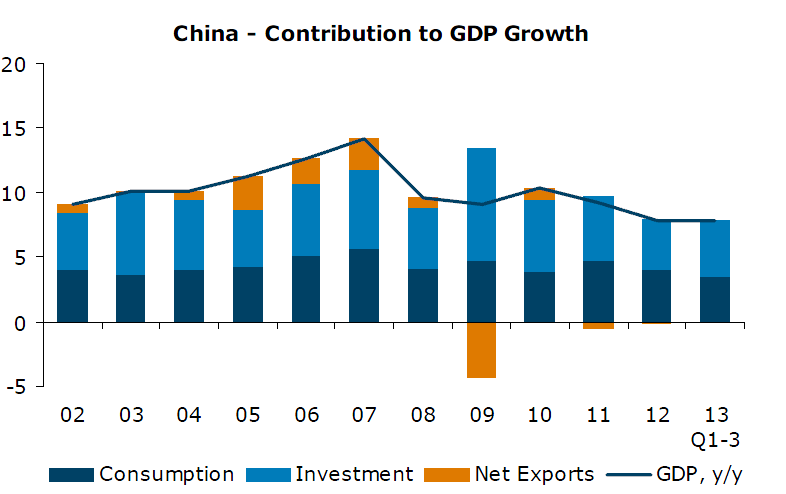 Point 4: The repeated crashes of Chinese equities did nothing for sentiment, but consider the following. China’s equity market is effectively closed to foreigners, despite the repeated increases in the quotas of A shares available to foreign investors and the Hong Kong-Shanghai link. Estimates, taken with caution, put the holdings of foreigners at 5 to7 percent of total market capitalization. The original 40-percent drop of the SHCOMP is likely to have had a muted effect on the average G20 pension fund. The domestic macro impact in China is also likely to be modest, and most unlikely to trigger a financial crash. Chinese corporates had to postpone issuance, and this could impact investment. The 90 million retail punters represent less than 10 percent of the population and, hence, the wealth effect could be small. The authorities, however, have been left with a portion of the equity market in their hands, following the unwise price support intervention. Their holdings will remain as an overhang helping to tarnish a little the reputation of the Communist Party as a capable manager of the economy.

Point 5: All post-war financial crashes—Greece, Argentina, Brazil, Russia, South Korea, Thailand and, of course, the US—had one or more of the following in common: Banks overexposed to the property sector, growing and externally financed fiscal and current account deficits, growing external debt, overvalued forex rates and falling forex reserves. China has virtually none of these. Its key banks are state-owned, so a domestic banking crisis becomes a fiscal issue. China has an external surplus, a small fiscal deficit financed domestically and USD 3.5 trillion reserves, making it a global creditor. Creditors don’t go bust. However, use of the forex reserves is not an obvious recourse for any further market support, as sales of USD for CNY will push the exchange rate up and reduce, temporarily, liquidity in the market. Sentiment will remain poor, and the invitable further falls in the SHCOMP will cause most Asians as well as G20 equities to sag. Chinese shares may find support in first quarter 2016, when all the measures taken now help the economy to bottom. The gist of this report is not that all is well with China, but equally that the expecations of an impending crash and recession are unfounded. Watch out for an increase in “China bashing” as the US presidential campaign accelerates, not helped by the PLA (People’s Liberation Army) flexing its considerable arms, figuratively and actually!

Go to top
ABOUT THE AUTHOR
Dr Andrew F. Freris has a career spanning 47 years – 22 as professor of Economics in universities in London and in Hong Kong; 25 as investment banker with GT Capital, Salomon Bros, Bank of America and BNP Paribas; and, since 2014, running his own consultancy out of Hong Kong.
0 comment 0 FacebookTwitterPinterestEmail
previous post

Smart Investments Key to Success in the Internet of Things

AIK Banka: One of Serbia’s Top Financial Partners for its Corporate and Retail Sectors