Top Posts
Challenges Remain, But There Are Opportunities to Be Had in...
Interview with Mr. Olukayode Pitan, Chief Executive Officer and Managing...
Commodities Outlook for 2023
The Value of Cash in a Time of Crisis: How...
The US-Africa Leaders Summit: Fostering a Closer Relationship with the...
Three Key Sectors in Which to Invest in 2023
Home Finance China’s Belt and Road Initiative and Its Impact on the Middle East and North Africa
Finance 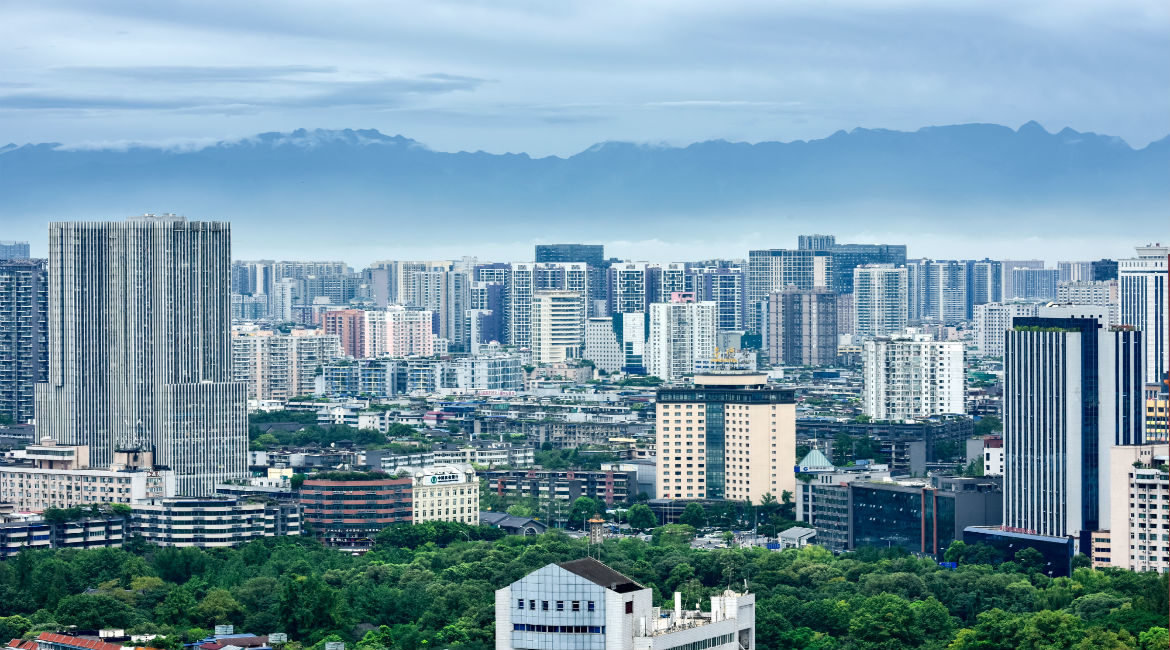 Attitudes towards the Chinese Belt and Road Initiative (BRI) have changed since the programme was first announced in 2013. At first, it was seen as an opportunity for global businesses and finance to invest alongside Chinese financial interests and create a trade route that would bring economic development and prosperity to the region. More recently, the initiative has been questioned as a means of China extending its power and influence— although, given the analysis of its foreign policy, China is only protecting its domestic interests, including its energy security. In essence, it is a domestic policy—not only is China exporting its trade surplus, but it also has stockpiles of cement and iron and steel that it can use to, in its words, further the economic development, peace and prosperity of other nations.

So, since 2013, China has had ambitious plans to build trade infrastructure and connections throughout Eurasia but also to enhance its marine presence through substantial investments in ports in East Asia. Since China’s economic policy is foreign policy, this seems like a plan to extend its influence across the landmass through Kazakhstan, Mongolia, Russia and Iran, although its policymakers regard the plans as peaceful and aimed at fuelling economic prosperity in these and other countries in the region. Its goal is to afford the benefits of development through trade that it has experienced to other nations by facilitating infrastructure investments along what was its “Silk Road”, begun some 2,000 years ago.

For this reason, McKinsey likens the project, if successful, to a 21st century Marshall Plan that could amount to an annual infrastructure expenditure across the Eurasia, East Asia and Middle East regions of some US$2 billion to $3 billion. The reach covers some 65 percent of the world’s population, one-third of world GDP and over a quarter of all cross-border goods-and-services trade.

The “Belt” is a railway from Asia to Scandinavia, while the “Road”, somewhat confusingly, is the old maritime Silk Road that covers the ports and shipping lanes from China to Venice. The ports along the Silk Road will not just act as trade hubs. Gwadar in Pakistan, for example, is potentially earmarked as a temporary naval base, and this creates potential tensions between China and India.

Yet, throughout China’s history, trade has been the vehicle for what it calls cultural exchange and regional collaboration. The reasons for being more explicit about those ambitions now may well be associated with the somewhat isolationist stance that the United States is currently taking towards the World Trade Organisation (WTO), its exit from the Trans-Pacific Partnership (TPP) and its concerns about its engagement with the North American Free Trade Agreement (NAFTA). China’s proposed Regional Comprehensive Economic Partnership (RCEP) does not substitute for the TPP, and the BRI project is not a free-trade area, nor is it a customs union. The BRI is simply an ambition to provide trade infrastructure across the region, not to be a vehicle for regional integration.

There are plenty of examples of where the BRI will have an impact, but the impact on the Middle East is not as well understood as, for example, the Asian one. Yet China’s reach into this space is already substantial and has the potential to exacerbate some of the tensions between the players in that region and, indeed, between Russia and the United States if the process of investment is not sensitively handled.

China is MENA’s (Middle East and North Africa’s) largest export partner, and although trade values have fallen back significantly over the last five years, this is because of the fall in commodity prices. Oil accounts for the majority of MENA’s exports to China; trade and MENA’s role in Chinese energy security have been growing substantially as countries such as Saudi Arabia have reduced their dependency on the US and turned towards China and even Russia as destinations for their exports.

For MENA, it is likely that the BRI will be a double-edged sword. China has increased its investment in the region exponentially over the period since 2005, with a particular focus on Saudi Arabia, the UAE (United Arab Emirates), Egypt and Algeria (Figure 1). 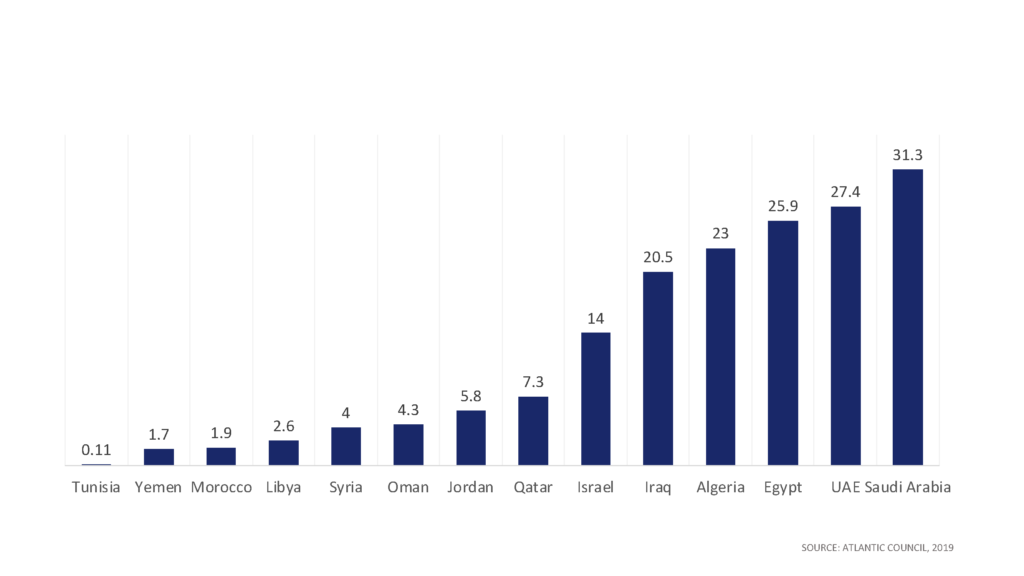 The biggest oil exporters are clearly the winners here, but China’s strategic investment in the region is likely to be more politically significant. The BRI is the embodiment of China’s foreign-policy stance: that conflict and disputes are less likely if every economy is growing and individuals have access to that wealth. It sees itself as exporting its own economic model to other countries that may benefit from investment, and while this has created heavy debt burdens in countries such as Pakistan and Sri Lanka, the Chinese attitude to this is that the long-term prospect of growth outweighs the short-term problem of debt. As the BRI is not scheduled to be completed until 2049, this is a very long-term ambition.

Even so, the biggest considerations for the UAE and Saudi Arabia will centre around their existing debt burdens and desires for increased inward investment. Saudi Arabia is in a weaker position in terms of acquiring greater long-term debt than the UAE, but both countries have invested heavily in developing trade with China over the last five years and will be reluctant to hamper that progress.

It is estimated that around US$210billionof the originally planned US$1 trillionof BRI investment has already been spent, predominantly across Asia. However, the hubris originally surrounding theBRI has abated since it first became explicit Chinese policy in 2013. Countriessuch asMalaysia and Pakistan have paused to review their participation, as their own fiscal challenges have the potential to become more acute with greater involvement. “China’sMarshall Plan”is focused on economic development, and yet in some countries, Chinese firms are seen to be benefiting over and above local ones.[The Marshall Plan was an American-led initiative to provide aid to war-torn Europe at the end of the Second World War. The funding was a mix of grants and loans and distributed to European nations in relation to the size of their gross domestic products (GDPs). The Belt and Road Initiative has been likened to this in that it is a large sum of money through a mixture of investments and loans.]

Within the MENA region, unemployment is underreported and is possibly higher than public records state. Because the region also suffers from insurgencies and popular uprisings, inward investment from China linked to Chinese businesses may not provide the answers that policymakers are currently seeking. This is particularly the case for some of the most heavily invested countries, such as Algeria, Saudi Arabia and Egypt, where unemployment is currently 11.6 percent, 12.9 percent and 10.9 percent respectively. Similarly, with public debt as a percentage of GDP at 28 percent in Algeria and 82 percent in Egypt, adding to the debt burden may be ill-advised at this stage.

However, it’s worth pointing out that there are benefits of significant investment in the MENA region, particularly because of the global trade that the BRI will undoubtedly bring. When the BRI policy was first announced, the project was seen in a positive light because of just that. It is important for the region’s businesses, financial institutions and policymakers to think objectively about the costs and benefits of the initiative: failure to do so may limit growth and economic co-operation in the future.

Meanwhile, the political challenges that the BRI could bring to the MENA region cannot be understated. At present, the proposed Silk Road goes north of the Gulf through Kazakhstan, into Iran and across to Greece. Investments in Iran or Pakistan could deepen some of the tensions between Saudi Arabia and Iran. The sea route passes by the Horn of Africa, up the Red Sea and through the Suez Canal. These are highly sensitive areas, and the fact that China has proposed economic aid of US$15 million to the Palestinians and US$90 million to reconstruction and economic development in Syria, Yemen, Jordan and Lebanon has the potential to create tensions. These tensions will not just be felt in the region but could spill into a global dispute between the US and China as the investments themselves may be interpreted as being politically motivated.

Whither Belt and Road?

Much of the success of the BRI will depend on countries other than China. This is not because China is not committed to the project. Nor is it because China does not have the ambition to grow its influence through trade by connecting Europe to Asia through its 21stcentury Silk Road. Rather, it is because the sheer scale of the ambition, the reach and the finances of the project require a multilateral approach with multiple players and multiple countries.

The initiative will, of course, benefit China, however, so gaining that international support is proving more difficult than expected. In 2013, it was over-supplying infrastructure products, which, as its strategy changed towards demand-led growth, created a surplus that could be manufactured elsewhere. Since then, it has run down its foreign-currency reserves, and while it wants to share the benefits of its own export-led model, the economies in the region do not have the financial clout that they had as they were developing through the heady days of globalisation.

Indeed, nor does China itself have that financial clout today. It is wary of capital flight as its economy grows more slowly. The Asian Infrastructure Investment Bank (AIIB) and the New Development Bank (NDB) (formerly the BRICS Development Bank) have between them US$200 billion, but this is a fraction of the amount that will be required to fund the project on the scale that is currently imagined. A further US$40 billion from the Silk Road private-equity fund is also only a drop in the ocean.

China has explicitly stated that it cannot “go it alone”—the challenges of the world are too big for it to be able to achieve its ambitions by itself. So much of the short- and medium-term success of the project will depend on the appetite amongst global banks and global investors to fund infrastructure development in some of the world’s most difficult countries from a compliance perspective—the countries themselves score highly on corruption indices and political-instability indices, and the trade values are small. In the current global trade climate, these are significant hurdles.

China will need to open up its financial markets to overseas investments and businesses if it is to make the BRI work. In the end, this will mean that it both supports peace and stability in the fragile countries where it is building, including giving more work to local employees and allowing local contractors into the projects. It will also have to not only open up its own banks to supporting overseas businesses, as indeed its credit agency has done, but also allow overseas credit agencies to work alongside Chinese investment.

Is AI Capable of Overhauling the Customer Experience Offered by Banks?