Top Posts
Record Youth Unemployment in China Weighs Heavily on Graduates’ Job...
Is It Really Time to Scale Back Exposure to Commodities?
Fears of a Coming Stagflationary Economy Continue to Grow
Fintech Funding Trends Indicate That This Year Will Underperform 2021
Digital-Banking Development Is Essential for Boosting Financial Inclusion in ASEAN
Gold Buying Once Again on the Agenda for Central Banks
Home Finance Climate Solutions Lie Within Our Grasp—If We Can Transfer Technology Rapidly
Finance 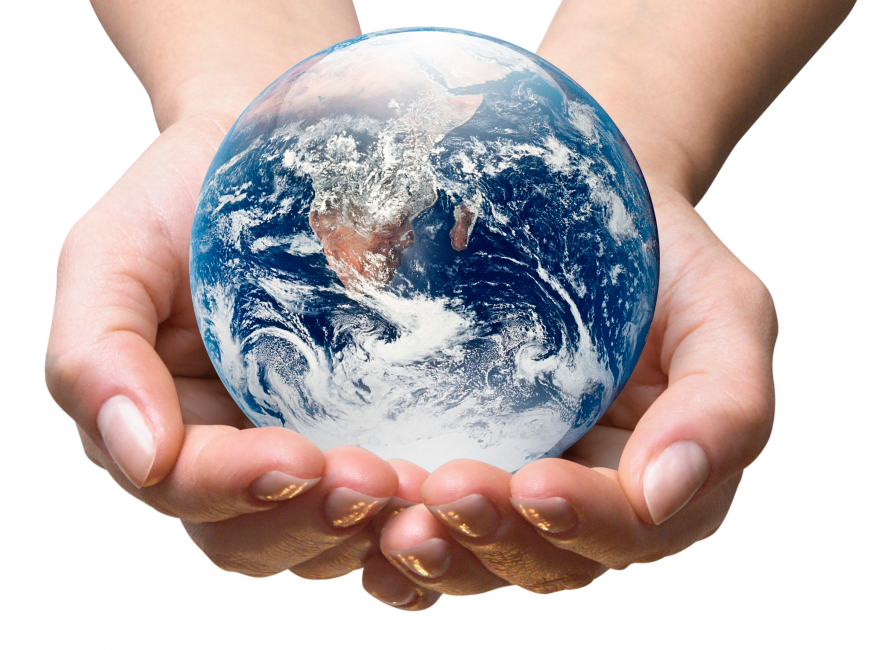 Solving the climate crisis—perhaps the defining challenge of our time—is often posed as a question of innovation. But the truth is, we already have the tools and technology we need to contain global warming. A new report from the World Bank Group, “Technology Transfer and Innovation for Low-Carbon Development”, shows that most of the emissions reductions we need to meet the targets in the Paris Agreement can be achieved with existing, commercially proven technology1“Technology Transfer and Innovation for Low-Carbon Development”, Miria A. Pigato (ed.) and Simon J. Black, Damien Dussaux, Miles McKenna, Zhimin Mao, Simon Touboul and Ryan Rafaty, The World Bank Group, 2020.. The challenge is deploying established low-carbon technologies (LCT) en masse where they are needed most: in lower-income economies. 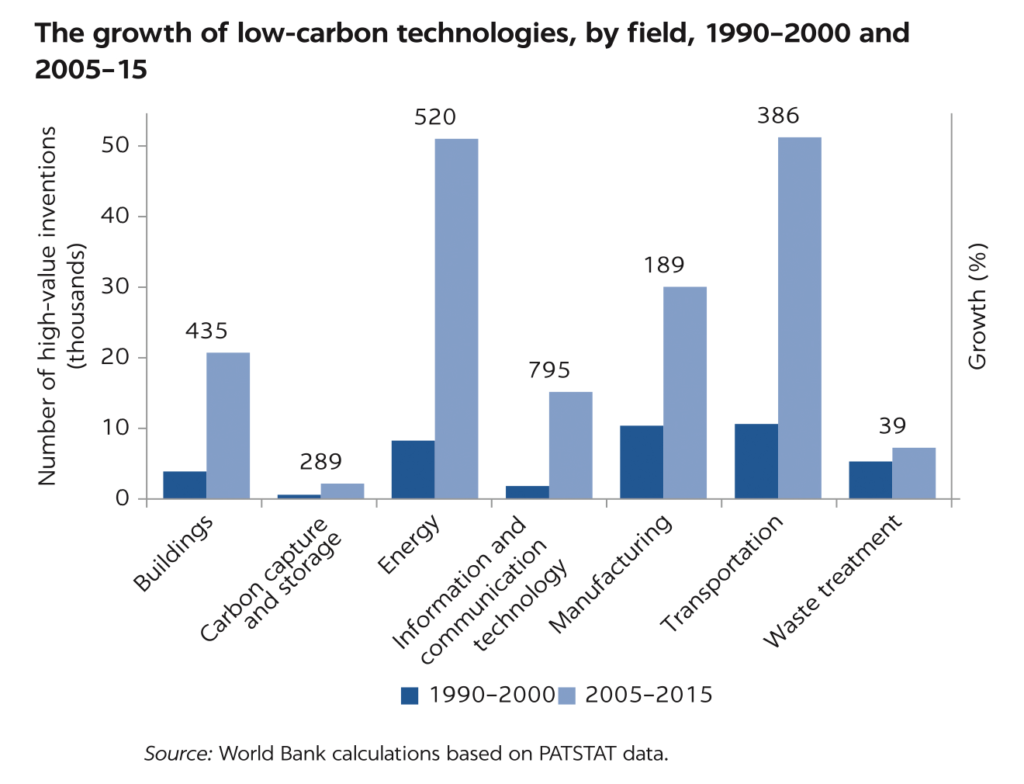 As a result, we have functional, practical and affordable LCT in many sectors. In the past eight years alone, each installed gigawatt of solar energy has become 80 percent cheaper. The costs per gigawatt of energy storage and onshore wind have also dropped—by 54 percent and 22 percent, respectively. If low-carbon technologies like these were deployed fully in just four sectors—energy, transport, industry and buildings—we could achieve two-thirds of the emissions reductions needed to contain global warming to 1.5 degrees by 2030. 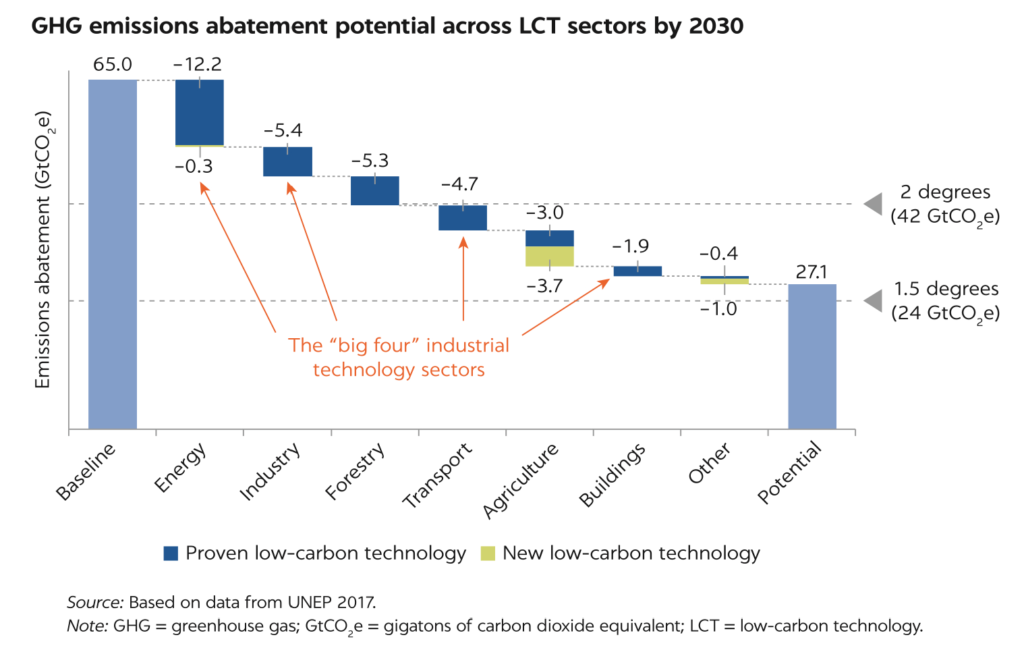 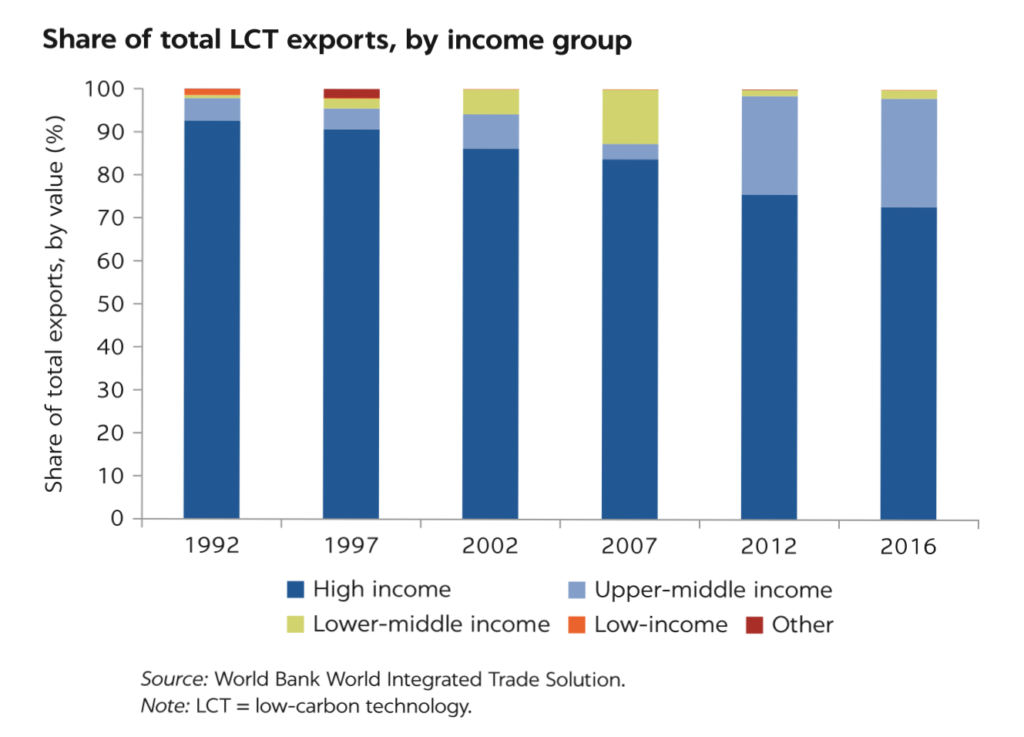 Trade flows of LCT products from high-income economies to developing economies is increasing—although from negligible beginnings and only in a handful of places. In fact, the bulk of this growth has occurred almost exclusively in China, which is now the world’s largest importer and exporter of LCT. 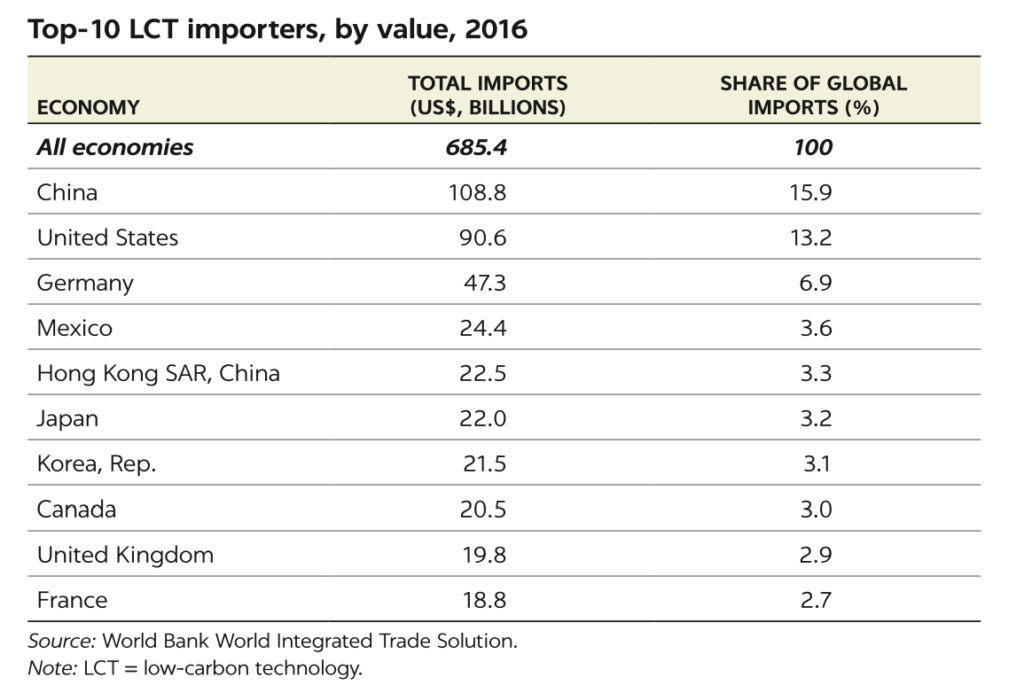 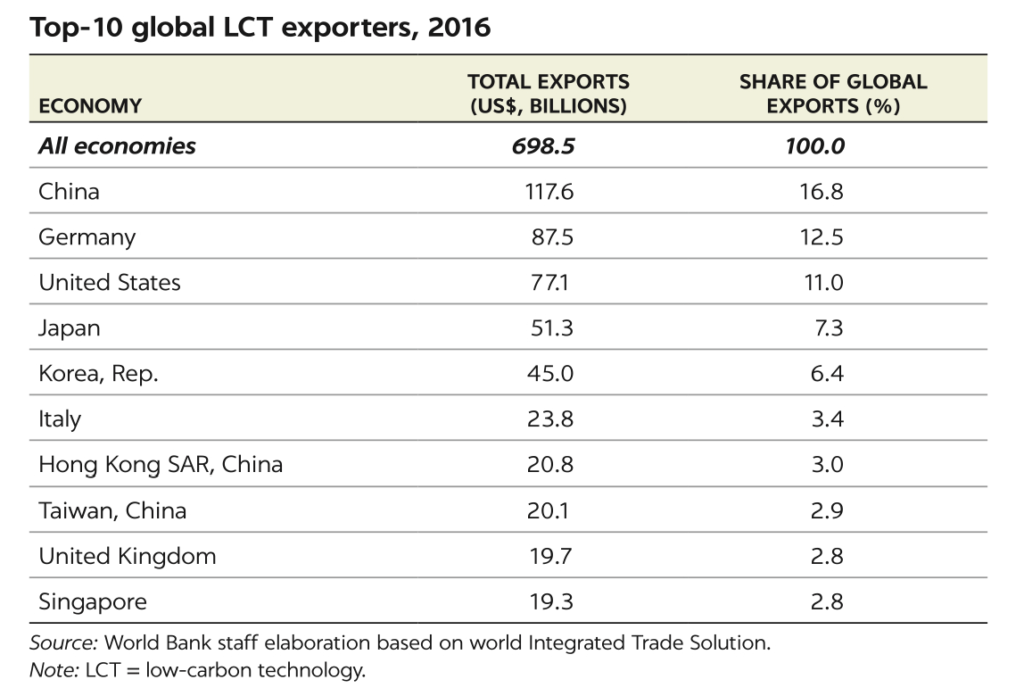 Why haven’t more developing economies become bigger players in the LCT market? The road to mainstreaming homegrown technology—LCT or otherwise—is long and hard. Before they can deploy and adopt innovations sustainably, countries must lay the groundwork. The first step is importing technology from abroad and adopting it. Over time, with sustained increases in long-term investments from the private and public sectors, countries can absorb what they have learned from importing to build and, eventually, export their own products.

The case of China

In 2018, China sold one million electric vehicles (EVs), representing half of all electric-vehicle sales globally. This market boom did not happen overnight. In fact, China tried earlier in the decade to mainstream electric vehicles with muted success. What changed? 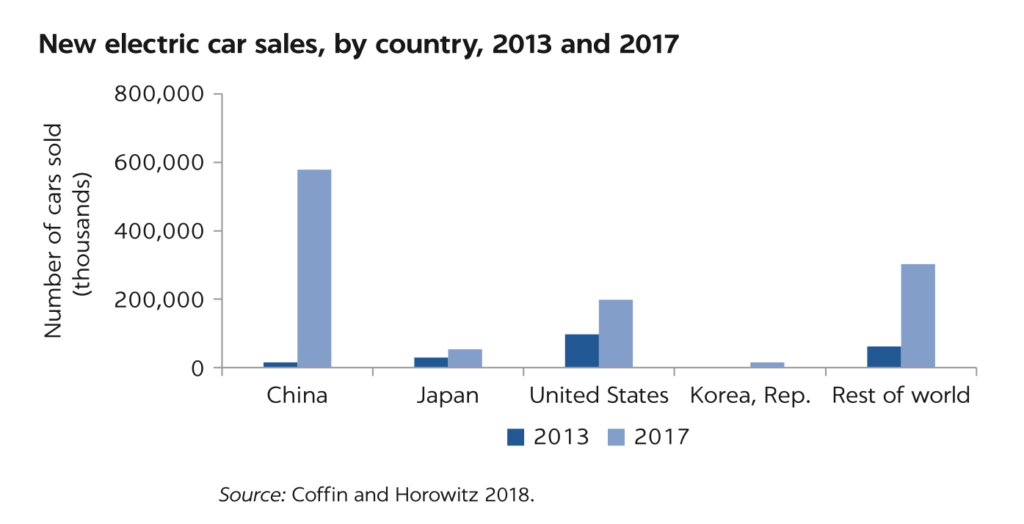 China’s initial push into the EV market had a clear motivation. China is the world’s largest emitter of carbon dioxide and faces high risks from climate change—it loses about $76 billion to natural hazards every year. Given this, shifting the population to EVs was important for pollution control, energy security and economic growth.

Building on a decade-long process of investing in research and development, the government launched an ambitious pilot program in 2009 to promote the development of EVs in several cities and regions (the so-called Ten Cities, Thousand Vehicles program). Although the program was centralized, the pilot cities had significant leeway to determine what models of cars to roll out, depending on the circumstances in each location.

This program did not succeed as expected. Firms realized that the development of a national industry would require uniform industrial standards for battery types as well as standard designs for public buses, all of which were missing. It became clear that the transition from conventional vehicles to EVs would need better incentives and closer coordination among auto manufacturers, battery developers, infrastructure providers and consumers.

Reacting quickly to the failure of the program, the government significantly increased subsidies to EV manufacturers and developed a network of charging facilities and services based on unified standards. Working closely with the government and local authorities, the industry focused on producing cheaper, better-designed models tailored to the preferences of Chinese consumers. This time the program worked, and in 2015, China became the world’s largest EV market.

Several lessons emerge from this experience. First, the government’s vision and support (for example, by building infrastructure networks) were essential to enabling EV producers to overcome the entrenched dominance of conventional vehicles.

Third, contrary to the traditional automotive market—dominated by joint ventures with foreign companies—the EV market was powered by domestic firms. The EV industry managed to grow thanks to its own capacity to innovate on the imported technology and create a new LCT industry that delivers to a mass market.

This approach worked in China because it is a unique case: it is the world’s largest investor in renewable energy. In 2016, China accounted for 45 percent of global investment in renewables. It is also a country willing and able to go to astronomical lengths to subsidize EVs. In 2016, each EV sold in China benefited from about US$8,000 in government subsidies, much higher than in California ($2,000 per vehicle) or Sweden ($4,500 per vehicle). Although China could afford this level of subsidization, most countries cannot and should not.

While following China’s path is certainly possible, it may not be advisable, and it is certainly not efficient. Given the severity of the climate crisis at hand, if we were to wait for each individual country to develop its own individual market for LCT like China’s foray into EVs, our coastal cities would flood while prototypes were still being developed.

There is a faster way: trade. Importing technology and products from abroad wins developing countries quicker access to innovations and equipment that they otherwise cannot yet produce or afford at home. Instead of starting from scratch when it comes to LCT, developing countries can get on a faster track to a low-carbon future by creating policies that increase their ability to acquire, absorb and advance already-existing technologies.

Some countries will find this easier than others, depending on their ability to overcome barriers to adoption. Paving the way for LCT requires high up-front capital investments in complementary areas such as physical infrastructure. Chronic underinvestment in technological foundations such as power grids and transmission lines limits the degree to which countries can adopt LCT.

Many countries must also overcome intense inertia and competition from the fossil-fuel industry. Countries without established fossil-fuel industries will face an easier transition. Political uncertainties—governments that waver on their commitments to renewable energy—also impede progress. This means that countries that are serious about prioritizing LCT should also price carbon appropriately and stop subsidizing fossil fuels.

But above all, a country’s human capital—the quality of its workforce—remains the single biggest predictor of LCT trade and innovation. A 10-percent increase in human development is associated with about a 6-percent increase in LCT imports and a 16-percent increase in LCT exports. Educated, healthy and visionary workers are better equipped not only to operate and maintain imported technology but also to spread their learning at scale and reverse engineer technologies for production at home.

The good news is that while the global transfer and deployment of LCT to lower-income economies is a necessity, it is also an opportunity. When designed and implemented well, the same policies that entice firms to deploy LCT could also be good for economies as a whole. These policies help firms by increasing output, innovation and competitiveness. They benefit people by creating employment opportunities and improving human health through less pollution. Finally, they boost markets by helping countries get on a path of export-led growth, a known strategy for achieving development outcomes.

This brings me back to my original assertion. Solving the climate crisis hinges not on our ability to invent new technologies—rather, it requires developing countries to become more open to trade and to promote the diffusion of LCT. Without complementary investments in human and physical capital—or forward-facing policies that phase out fossil-fuel subsidies and implement carbon pricing—development will continue to be biased toward high-carbon technology. The technology to power a low-carbon future is available. But unless it is transferred en masse to developing countries, it’s unlikely the Paris Agreement targets for reducing emissions will ever be achieved.

The book this article refers to is now online: https://openknowledge.worldbank.org/handle/10986/33474

How Social Media Can Boost Public Trust in Your Bank

Fears of a Coming Stagflationary Economy...