Top Posts
Challenges Remain, But There Are Opportunities to Be Had in...
Interview with Mr. Olukayode Pitan, Chief Executive Officer and Managing...
Commodities Outlook for 2023
The Value of Cash in a Time of Crisis: How...
The US-Africa Leaders Summit: Fostering a Closer Relationship with the...
Three Key Sectors in Which to Invest in 2023
Home Finance COVID-19’s Crippling Impact on Global Food Security
Finance 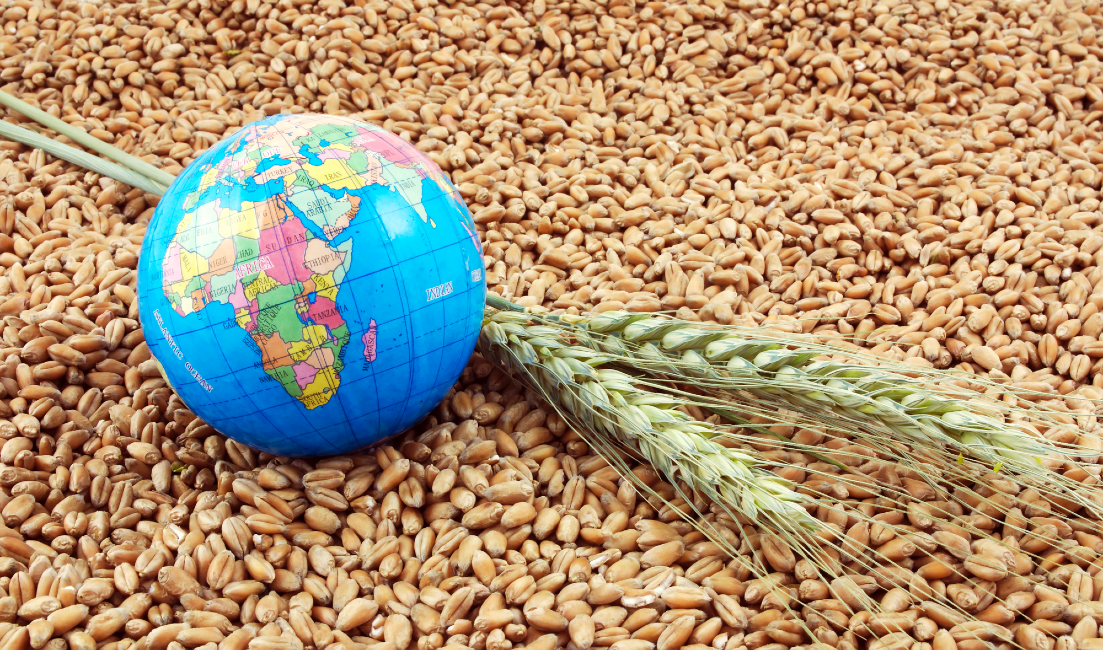 As much as the world has accomplished thus far in mitigating the spread of the coronavirus and bringing down case numbers, much of the economic impact unleashed by the pandemic has been more difficult to resolve. Perhaps most concerning of all are the weakening levels of food security in many countries.

Food security, as defined by the United Nations’ Committee on World Food Security (CFS), means that all people at all times have physical, social and economic access to sufficient, safe and nutritious food that meets their food preferences and dietary needs for an active and healthy life. Conversely, someone is said to be “food insecure” when they lack such access, with hunger being a more extreme expression of this state and one that an alarming proportion of the global population finds itself in today.

Global hunger numbers were already dire before the outbreak of COVID-19, which only underlines how desperate the situation has now become. According to the Food and Agriculture Organization of the United Nations (FAO), world hunger had been rising before the pandemic, estimating that the number of undernourished in total had increased from 624 million people in 2014 to 688 million in 2019. The FAO attributed this rise to such factors as extreme climate events, conflict and, more recently, locust outbreaks in such areas as East Africa and the Arabian Peninsula. But the coronavirus has only expedited that increase significantly, with the World Food Programme (WFP) estimating that as of April 2021, 296 million people are undernourished in the 35 countries within which it works—a whopping 60 percent more than the figure recorded just a year ago.

In Latin America and the Caribbean, for instance, food-security levels were already waning prior to the virus outbreak and have only worsened dramatically in certain countries over the last year. Nonetheless, the FAO expects the region will be able to produce sufficient reserves to adequately feed its inhabitants in the coming months. “The main risk in the short term is not being able to guarantee access to food for the population that is complying with sanitary security measures to prevent the spread of the virus, and that in many cases has lost its main source of income. In addition, it is essential to keep the food system alive in order to ensure supply to consumers.”

But the impact is particularly pronounced in lower-income countries. Rapid phone surveys done by the World Bank in 48 countries showed a significant number of people running out of food or reducing their consumption. “Reduced calorie intake and compromised nutrition threaten gains in poverty reduction and health and could have lasting impacts on the cognitive development of young children,” the development institution recently noted.

Bangladesh, for instance, has struggled to secure adequate food supplies during the pandemic. Public food-transfer programmes—that is, social-welfare programmes that transfer food to the poor—have helped combat the alarming numbers of hungry citizens, but even these programmes have proven insufficient. The country’s largest programme of this kind, the Food Friendly Program (FFP), was found by the International Food Policy Research Institute (IFPRI) to have experienced significant disruption and poor delivery performance during the lockdowns. The FFP normally provides 30 kilograms of rice per month to each eligible family in Bangladesh in the lean months of the year, March to April and September to November, reaching around 27.5 million people annually. The government expanded the FFP in response to COVID-19 to allow for additional transfers in May 2020. But an IFPRI policy brief found that “FFP beneficiaries received on average only 12.7kg of the promised 30kg” in May and that “only 41 percent of households reported receiving their full entitlement in May 2020, and a sizable 58 percent reported receiving less than 10 kg”.

Even in developed countries, the impact on food security among lower-income segments is becoming critical. In the United States, for instance, the overall food-insecurity rate had reached its lowest point since it began to be measured in the 1990s just before the pandemic. The poorest families spent 36 percent of their income on food in 2019, according to the U.S. Department of Agriculture (USDA). But rising food prices during the pandemic have only weakened food-security levels. According to USDA data, the CPI (Consumer Price Index) for grocery store or supermarket food purchases rose 3.5 percent in 2020, the highest annual increase in almost 10 years and well above the 20-year annual average of 2.0 percent. Feeding America, a non-profit network of more than 200 food banks that feed more than 46 million Americans, estimated that 45 million people (one in seven), including 15 million children (one in five), may have experienced food insecurity in 2020.

Rising food prices have only magnified the problem for the world’s poorest. The cost of food increased significantly in 2020, partly in sync with the rally that fomented across the broader global commodities complex and US-dollar currency trends during the year. But prices have also strongly risen on the back of COVID-related disruptions to food supplies, coupled with persistently buoyant demand as consumers have continued to stockpile food during the crisis. As such, the food component of the global consumer price index (CPI) rose at a much faster rate than the broader benchmark, with prices of food products in August 2020 a full 5.5 percent higher than they were 12 months earlier. 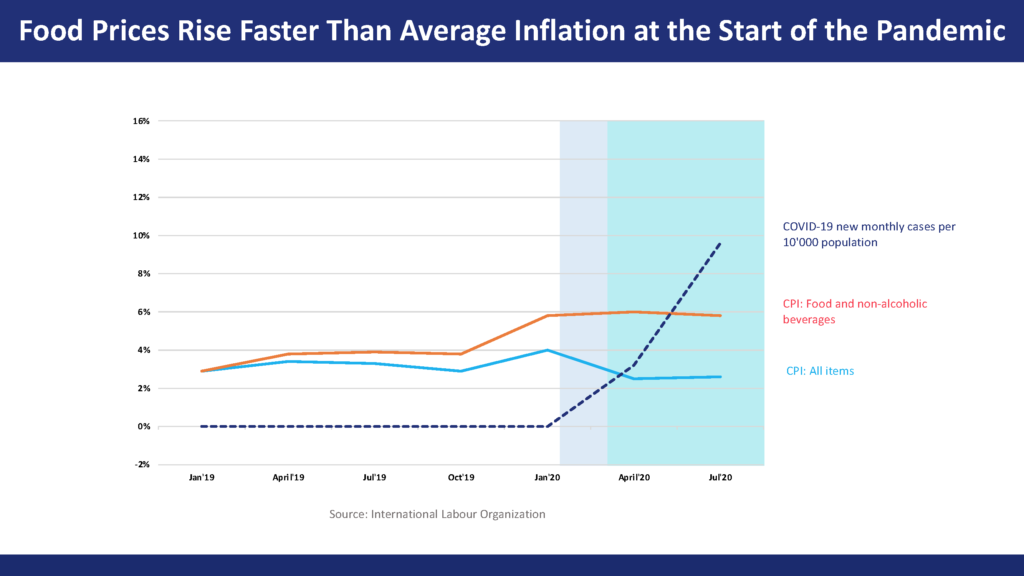 Such sharp price rises have had profound impacts on households all over the world but particularly those lower-income households that spend a larger proportion of their incomes on food. The primary risks to food security are at the country level, according to the World Bank, which recently noted that higher prices combined with reduced incomes are forcing more households to cut down on both the quantity and quality of their food consumption. Consistently rising food prices this year, moreover, suggests further food-security concerns await the world. The FAO Food Price Index (FFPI) averaged 118.5 points in March 2021, which is 2.1 percent higher than in February and represents the 10th consecutive monthly rise in the value of the index to reach its highest level since June 2014. 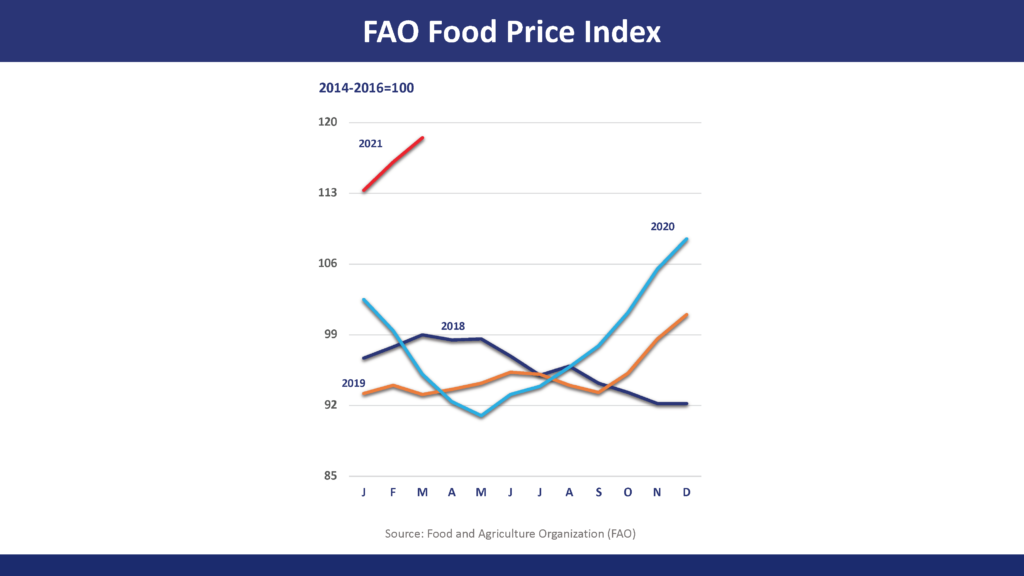 “I think food prices are going to continue to increase for probably a good year, year and a half,” according to Phil Lempert, founder and editor of SupermarketGuru.com. “Our costs are going to go up for food production,” he told NBC News in early March. In turn, this will continue to weigh most forcefully on the world’s most vulnerable populations. A recent study in the United States found that while the $900-billion stimulus package approved by the U.S. Congress in December 2020 lifted 1.6 million people out of poverty, a staggering 8 million Americans fell into poverty between June and December. “If you think about food prices in the last year, they’ve gone up substantially,” said Geri Henchy, director of nutrition policy at the Food Research & Action Center (FRAC). “The impact for low-income people is they have limited budgets, which makes it that much harder to buy enough food, and it makes it that much harder to buy healthy food. It’s a disaster.”

“Though current food insecurity is by and large not driven by food shortages, supply disruptions and inflation affecting key agricultural inputs such as fertilizers and seeds, or prolonged labor shortages could diminish next season’s crop,” according to the World Bank. “If farmers are experiencing acute hunger, they may also prioritize consuming seeds as food today over planting seeds for tomorrow, raising the threat of food shortages later on.” Feeding America, meanwhile, has projected that 42 million people (one in eight), including 13 million children (one in six), may experience food insecurity in 2021. “This reflects an improvement relative to our updated 2020 projections, which can be attributed to the economic situation—actual unemployment and estimated poverty levels have been lower than many experts originally predicted—as well as the federal response, which has played an important role in mitigating the crisis.”

The coming decades were already being touted, before the pandemic, as posing significant challenges to achieving global food security—with pressing issues such as climate change, global population growth, potentially volatile food prices and environmental degradation all likely headwinds looking into the future. COVID-19 and its inevitable aftermath have only added to this list of challenges.

Digital Transformation and Sustainability at Produbanco