Top Posts
How Gamification is Catapulting Digital Banking to the Next Level
Challenges Remain, But There Are Opportunities to Be Had in...
Interview with Mr. Olukayode Pitan, Chief Executive Officer and Managing...
Commodities Outlook for 2023
The Value of Cash in a Time of Crisis: How...
The US-Africa Leaders Summit: Fostering a Closer Relationship with the...
Home Finance Cryptocurrencies Filling Crucial Role in the Russia-Ukraine Conflict
Finance 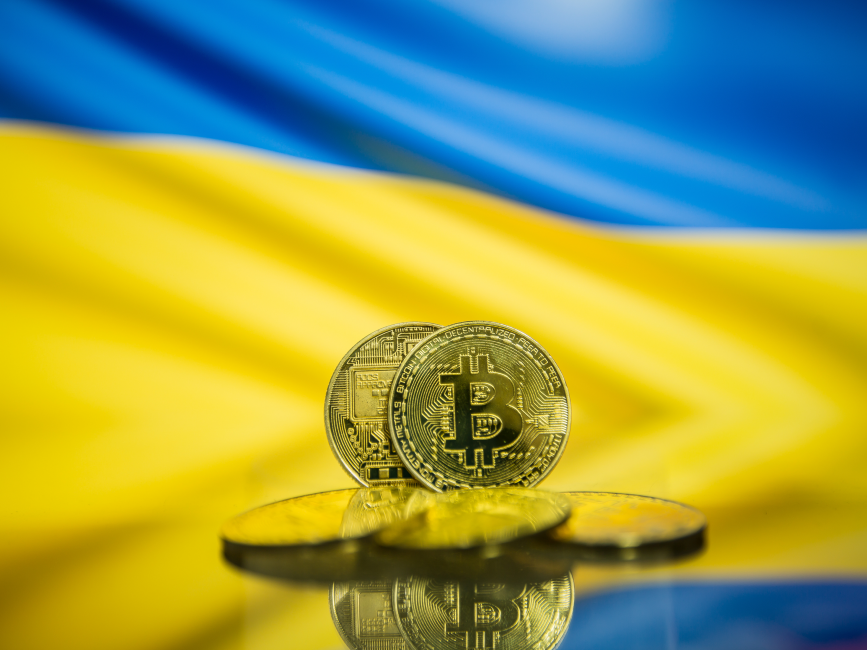 Since late February, It has been front and centre of Western media: Russia’s invasion of Ukraine has upended the global geopolitical landscape, while a lasting peace seems unlikely to be brokered anytime soon. But perhaps one of the less-discussed aspects of the war is the outsized role cryptocurrencies have played in the war to date. In both the Russian and Ukrainian camps, as well as in terms of the world’s wider role in the conflict, the use of digital currencies has been crucial in advancing the interests of various parties.

Cryptocurrency’s role has not gone unnoticed by some leading figures within the financial-services industry. BlackRock’s chief executive, Larry Fink, acknowledged in a March 24th letter to shareholders that a less-discussed aspect of the war is its potential impact on accelerating digital currencies. “The war will prompt countries to re-evaluate their currency dependencies. Even before the war, several governments were looking to play a more active role in digital currencies and define the regulatory frameworks under which they operate,” Fink wrote.

And why not? After all, cryptocurrencies hold a distinct set of advantages over fiat currency when it comes to the transfer of value, and as such, they have been preferred in certain key scenarios as the war has raged on. For instance, transfers are executed virtually instantaneously, with value being sent from one part of the world to another in minutes, if not seconds. Through the use of blockchain technology, moreover, digital currency is securely and directly delivered from one party to another without the need for a transactional intermediary, such as a bank, to be involved, as is the case with fiat transfers.

Of course, that’s not to say that the total value of crypto donations during this war has usurped those made using fiat currency; on the contrary, governments and multilateral development institutions have donated billions of dollars in aid to Ukraine. Nonetheless, crypto’s crucial importance has been far from insignificant, a trend that would no doubt be acknowledged and supported by both Ukraine and Russia, given that they already ranked 4th and 18th, respectively, in Chainalysis’s 2021 Global Crypto Adoption Index, which measures grassroots cryptocurrency adoption around the globe by country.

It is perhaps not surprising, then, that digital assets have played a major role on both sides of the conflict. Even before the conflict broke out, Ukraine received significant sums of cryptocurrency donations through NGOs (nongovernmental organisations) and volunteer groups as tensions with Russia escalated. According to crypto-asset compliance firm Elliptic, bitcoin emerged as the key alternative-funding method during this period, thus allowing international donors to bypass financial institutions that could conceivably have blocked payments to such organisations. “Elliptic has identified several cryptocurrency wallets used by these volunteer groups and NGOs, which have collectively received funds totalling just over $570,000—much of it over the past year,” the firm noted in early February, before the invasion. “Cryptocurrency has proved to be a robust and growing alternative (to traditional currency)—especially when it comes to donations from other countries.”

The crypto-based fundraising abilities of specific Ukraine-based NGOs, such as Come Back Alive—one of the largest organisations supporting the Armed Forces of Ukraine—are evident. “The group now provides a range of military equipment, training services and medical supplies. It even funded the development of a drone-based reconnaissance and targeting system for Ukrainian artillery units.” Elliptic explained. “Come Back Alive began accepting crypto-assets in 2018, and it has seen a recent surge in Bitcoin donations—with close to $200,000 received in the second half of 2021.”

A couple of days after the invasion commenced, the Ukrainian government, led by President Volodymyr Zelensky, publicly posted crypto-wallet addresses to receive bitcoin, ether and the US dollar stablecoin tether to enable global supporters to fund Ukraine’s war effort. This proved to be an immediately effective strategy for Ukraine, as $10.2 million worth of crypto was sent to the wallets during just the first four days of combat. The first couple of weeks of March also saw Ukraine use the bulk of its crypto donations to buy 5,500 bulletproof jackets, 410,000 packed lunches, 500 ballistic plates for bulletproof vests, 3,125 thermal imagers and optics, 500 helmets, 3,427 medicines and 60 walkie-talkies, according to Alex Bornyakov, one of Ukraine’s deputy ministers of digital transformation. “Crypto-assets proved extremely helpful in [the] facilitation of funding flows to the Armed Forces of Ukraine,” Bornyakov acknowledged. “Huge thanks to everyone who donated to the Crypto Fund of Ukraine. Each and every helmet and vest bought via crypto donations is currently saving Ukrainian soldiers’ lives.”

Today, Ukraine accepts donations in 14 cryptocurrencies. “Crypto really helped during the first few days because we were able to cover some immediate needs,” Bornyakov recently confirmed. The government has raised more than $100 million worth so far, with a notable chunk of that coming from Ukraine DAO, a decentralised, autonomous organisation, which raised more than $6 million through the auction of a non-fungible token (NFT) of the Ukrainian flag. According to Elliptic, the sale of the NFT was the tenth most expensive ever, with the proceeds going to non-profit organisations within Ukraine that have been assisting those impacted by the invasion. “It’s certainly a first,” Bennett Tomlin, who investigates cryptocurrency scams and hosts the podcast Crypto Critics’ Corner, told Euronews. “We’ve never seen a sovereign nation fund their defense efforts in crypto before. It does prove out a lot of the crypto argument.”

Indeed, the effectiveness of crypto in supporting Ukraine’s response to Russia’s invasion has even prompted Zelensky to sign into law a bill on digital assets. According to the Ukrainian Ministry of Digital Transformation’s March 16th statement, the On Virtual Assets Law creates conditions for launching a legal market for virtual assets in Ukraine. The law determines the legal status, classification and ownership of virtual assets; decides the market regulators—the National Bank of Ukraine (NBU) and the National Commission on Securities and Stock Market (NCSSM); creates conditions for further formation of the legal field in the virtual-assets market; determines the list of providers of virtual assets and conditions of their registration; and provides for the implementation of financial-monitoring measures in the field of virtual assets.

But, of course, it’s not only the Ukrainians seeking to exploit the benefits offered by digital assets. Russia is also realising the power of crypto to advance its own interests in the conflict. As the markets have demonstrated, the additional sanctions that have already been applied against Russia by Western powers, including the United States, the European Union and the United Kingdom, have put immense pressure on the value of the ruble (although it has managed to claw back much of this depreciation to trade near pre-invasion levels once more) and severely limited its potential use in international markets. But as the world’s biggest exporter of natural gas and second-biggest exporter of crude oil, Moscow has been keen to find alternative solutions to offload its substantial fuel supplies.

Enter crypto. In late March, Russia confirmed that it might accept bitcoin as payment for its oil and gas exports in the face of sanctions. “We have been proposing to China for a long time to switch to settlements in national currencies for roubles and yuan. With Turkey, it will be lira and roubles,” said Pavel Zavalny, head of Russia’s State Duma Committee on Energy, on March 24, adding that Russia has been looking at other routes through which it can receive payments for its oil and gas exports. “You can also trade bitcoins,” Zavalny added.

What’s more, Russian citizens have increasingly turned to bitcoin to avoid exposure to their own potentially volatile currency. “Some ordinary Russians are using crypto as a lifeline now that their currency has collapsed,” Brian Armstrong, chief executive of popular cryptocurrency exchange Coinbase Global, tweeted on March 4. “Many of them likely oppose what their country is doing, and a ban would hurt them, too.”

The notorious price volatility of bitcoin itself and other cryptocurrencies remains a pertinent risk. “Russia is very quickly feeling the impact of unprecedented sanctions. There is a need to shore up the economy and in many ways, Bitcoin is seen as a high growth asset,” David Broadstock, a senior research fellow at the Energy Studies Institute (ESI) in Singapore, told the BBC in late March, whilst also warning of the pronounced price swings the world’s leading digital currency has experienced this year, much more than the US dollar. “Clearly accepting bitcoin, compared with other traditional currencies, introduces considerably more risk in the trade of natural gas. Moreover, one of the major ‘friendly’ trade partners for Russia is China, and cryptocurrency is banned for use in China. This clearly limits [the] potential for payment using Bitcoin.”

Does this mean that Russia can use crypto to evade sanctions? “In theory, crypto can be leveraged for illicit purposes such as evading sanctions, but in practice, technological barriers, market structures, and limited liquidity will make it difficult for the sanctioned Russian actors to evade sanctions at scale using crypto,” according to Center for Strategic and International Studies (CSIS) economists Aidan Arasasingham and Gerard DiPippo. Jonathan Levin, a co-founder of Chainalysis, also echoed this sentiment. “We have not seen evidence of Russia or Putin systematically using cryptocurrencies to evade sanctions.”

Nonetheless, authorities remain on the lookout for sanction-evasion efforts being made by Russia. European Central Bank (ECB) head Christine Lagarde recently warned that crypto is “being used as a way to try to circumvent the sanctions” against Russia, adding that global transfers of rubles into cryptocurrency had been rising sharply in volume. And Elliptic’s chief executive, Simone Maini, confirmed that soaring trading volumes indicated that ordinary Russians were “bypassing oppressive capital controls and fleeing the devaluing ruble” for the relative safety of crypto-assets. “On the other hand, crypto fundraising has in the past also been used by Russian-backed forces. There is also the real risk of Russia using cryptoassets to circumvent sanctions through state-sponsored cybercrime, concealment of wealth and even crypto mining,” Maini wrote on her company’s blog on March 14. “Crypto is certainly no silver bullet against sanctions, but Iran and North Korea have shown how it can be exploited to lessen their impact. When countries face severe sanctions, they will look for any means to generate funds and evade restrictions.”

The US Treasury Department has also been warning financial institutions and cryptocurrency firms to be wary of attempts to evade sanctions and other restrictions imposed as a result of the conflict, with the Financial Crimes Enforcement Network (FinCEN), an anti-money-laundering agency within the Treasury, having issued an alert complete with red flags to help financial institutions identify potential evasion efforts.