Top Posts
Challenges Remain, But There Are Opportunities to Be Had in...
Interview with Mr. Olukayode Pitan, Chief Executive Officer and Managing...
Commodities Outlook for 2023
The Value of Cash in a Time of Crisis: How...
The US-Africa Leaders Summit: Fostering a Closer Relationship with the...
Three Key Sectors in Which to Invest in 2023
Home Finance Cuba Hopes to Emerge from Severe Economic Crisis
Finance 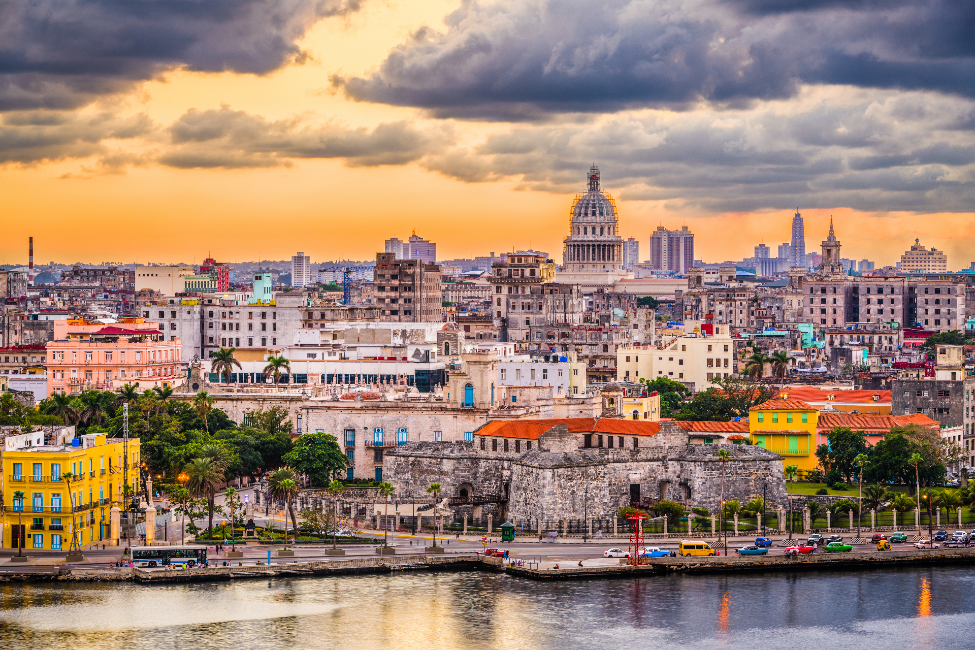 Soaring food and fuel prices, partly due to the war in Ukraine, have compounded Cuba’s woes this year, with the Caribbean island nation already suffering under the weight of US sanctions. As such, the country’s recovery from the COVID-19 pandemic remains severely threatened, as citizens continue to queue for basic goods, food and medicine, and hundreds of thousands leave the country.

According to Prime Minister Manuel Marrero (Cruz)’s annual report, the Cuban economy declined by a whopping 10.9 percent in 2020 after several years of stagnation and before staging a tepid 2-percent recovery last year. The 2020s contraction was the sharpest in more than 30 years when the collapse of the Soviet Union in 1991 dealt a massive blow to the country’s subsidy inflows. But now, ordinary Cubans are facing widespread shortages of fuel, basic food and other necessities, highlighting a devastating combination of problems that are now severely impacting living standards, including the weight of sanctions imposed by the United States, lack of tourism dollars due to the coronavirus pandemic and overreliance on imported food and fuel.

Indeed, one cannot ignore the debilitating impact of US sanctions on Cuba, with the administration of former President Donald Trump implementing measures that proved particularly consequential for the country. Trump largely cancelled the efforts at détente with Cuba made by his predecessor, Barack Obama, and reimposed a widespread trade embargo, which continues to limit investment in the country. Specifically, the imposition of Title III of the Helms-Burton Act, which enables the US to sue any entities that “traffic” in assets confiscated by the Cuban government, continues to weigh heavily on the Cuban economy. Other restrictive measures include the curtailment of flights and cruises to Cuba; additional sanctions on banks that do business with Cuba; and reinstatement of Cuba as a state sponsor of terrorism.

The sanctions also include limiting the number of remittance payments the Cuban diaspora can send back home, while the US has prohibited Western Union from sending remittances to a military-run Cuban agency. This has meant that Cubans have increasingly had to rely on visitors to the island to physically deliver money from friends and family based in the US. Such harsh measures have created a major shortage of currency, which has prompted the government to set up more hard-currency stores around the country that sell food items and accept dollar-linked debit cards as a form of payment. But such stores are invariably more expensive, while stocks tend to disappear quickly before being resold on the black market at a higher price when shortages increase.

“The Miguel Díaz-Canel government is going through a perfect storm,” Emilio Morales, head of the Havana Consulting Group, a Cuba-focused consulting firm in Miami, explained to US digital military publication Diálogo. “The lack of revenue from tourism, due to the pandemic, was coupled with the consequences of tougher measures by the administration of President Donald Trump to prevent the military from appropriating remittances, as well as the already dwindling income from the export of medical services.”

Moreover, Cubans have historically relied on neighbouring Venezuela, a country now under a similar burden of US-led sanctions, to satisfy their fuel needs. Under the presidency of Nicolás Maduro (Moros), Venezuela has reportedly provided more than 32,000 barrels per day of crude since 2019 to Cuba. But recent months have seen that number decline as Venezuela has been forced to retain more refined products for domestic needs. As such, Cuba now faces significant diesel and gasoline shortages, with long queues at gas stations now being observed more frequently.

Conditions could well worsen before they get better, moreover, especially given that recent reports from the island have stated that the 2021-2022 sugar harvest reached just 52 percent of its goal for the season. According to state-run news outlet Granma, 474,000 tonnes of sugar were harvested this year, drastically lower than the 800,000 tonnes of the crop produced last year, which was already the worst since 1908. According to Minister of Economy and Planning (MEP) Alejandro Gil, Cuba aimed for 911,000 tonnes of sugar production this year, 500,000 tonnes of which would be for domestic consumption and the remainder for the export market.

Sugar is among Cuba’s most important—and iconic—industries and has long been crucial to its rum production and a key source of foreign exchange and employment. Citing the state-run sugar company Azcuba, this shortfall has been due to a lack of inputs, including oxygen for sugar production, fertilizers, pesticides, fuel and spare parts for plant machinery. “The financial factor was among the most influential in the results of the harvest, exacerbated by the intensification of the economic, commercial and financial blockade of the US Government against the island,” according to the Granma report, which also noted that only 37 percent of the necessary herbicides and pesticides were available for use this season.

Added to this mix of problems are sharply accelerating prices. Inflation was thought to be in the vicinity of 70 percent last year, much of which was driven by skyrocketing prices for imports and implementations of painful economic reforms, such as the ending of the country’s two-tiered currency system and raising of prices on a number of key goods. Gil also attributed the runaway prices to the sanctions, which have kept thousands of containers of undelivered merchandise stuck in international ports.

All this means that more than a few Cubans have left their country in search of greener pastures elsewhere. Indeed, some reports suggest that the ongoing exodus to the US is the largest since the famous Mariel boatlift, when 125,000 Cubans migrated to Florida between April and October 1980. According to data published by the U.S. Customs and Border Protection (CBP), immigration authorities detained 114,916 Cubans, with only Mexicans being stopped in larger numbers during this period. According to Jorge Duany, an emigration expert who leads the Cuban Research Institute (CRI) at Florida International University (FIU), the ongoing migration is “undoubtedly” the largest exodus from Cuba in the last four decades. He cited several factors underpinning the mass migration when speaking to local Florida news outlet Tampa Bay Times: “the economic recession on the island, the intensification of the economic sanctions imposed by the Trump administration and maintained until now by the Biden administration, the coronavirus pandemic and the social uprising on July 11″ last year.

But a few green shoots of recovery—albeit sparse in number—have begun to emerge for Cuba. “We are beginning to see a clear and gradual recovery,” according to Gil, who recently acknowledged that some sectors are now experiencing growth following the waning of the pandemic. Gil expects the economy to grow by 4 percent in 2022. That said, soaring prices for food and fuel still require “audacious” measures to tame inflation, although prices have begun to slow in their upward momentum despite pressure on the price of imports. Gil also said in mid-May that the rising price of a top export, mineral nickel, was pivotal in Cuba’s enjoying a 38-percent increase in exports in the first quarter.

The Cuban economy may also soon receive some respite through the easing of US sanctions. On May 16, the US president announced that he would lift some Trump-era sanctions on Cuba and Venezuela, with the former expected to see an expansion of flights, easing travel restrictions and removal of the $1,000-per-three-month limit on sending remittances back to the Caribbean island. The US is also mulling the prospect of boosting consular services and restarting the family-reunification programme that Trump suspended in 2017.

The Cuban Ministry of Foreign Affairs, however, described the US government’s announcement as positive but very limited in scope. The ministry did acknowledge that the measures “identify some of the promises made by President Biden during the 2022 election campaign to alleviate the inhumane decisions adopted by President Trump’s administration, which tightened the blockade to unprecedented levels and increased the ‘maximum pressure’ policy applied ever since against our country.” But it also added that the US government’s most recent announcements do not alleviate the blockade, nor do they address the most significant aspects of the economic siege adopted by Trump, “such as the lists of Cuban entities subject to additional coercive measures; nor do they eliminate traveling restrictions for US citizens.”

The popular tourist island is also banking on the return of foreign visitors in the coming months as COVID-related restrictions continue to ease. Cuba enjoyed around four million tourists visiting the island every year prior to the pandemic, but that rate has slowed to a trickle in recent years and thus cut off a vital source of revenue for the economy. Indeed, Cuba’s tourism industry represents its largest source of hard currency, but with the island only fully opening its borders to visitors last November—later than most other countries in the region—much of the work to ramp up tourism income still lies ahead. “We decided that, whatever it cost, you had to preserve the health of the Cuban people,” said María del Carmen Orellana, vice minister of tourism. But, according to the Tourism Ministry’s Pilar Álvarez Azze, there is optimism that 2.5 million visitors will land on Cuban shores this year.