Top Posts
How Gamification is Catapulting Digital Banking to the Next Level
Challenges Remain, But There Are Opportunities to Be Had in...
Interview with Mr. Olukayode Pitan, Chief Executive Officer and Managing...
Commodities Outlook for 2023
The Value of Cash in a Time of Crisis: How...
The US-Africa Leaders Summit: Fostering a Closer Relationship with the...
Home Finance Debt-Payment Suspension Underlines Disastrous Economic Situation for Sri Lanka
Finance 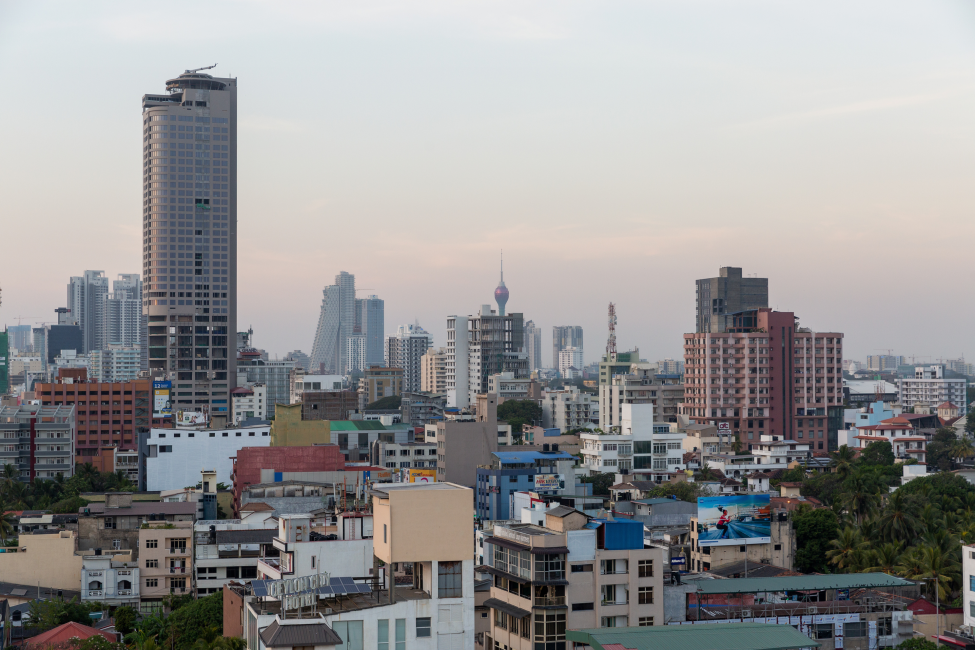 On April 12, Sri Lanka’s Ministry of Finance announced that the South Asian island nation would suspend payments on all its outstanding foreign-debt obligations until it was able to reach an agreement with creditors on a restructuring solution upon which it could proceed. “The effects of the Covid-19 pandemic and the fallout from the hostilities in Ukraine have so eroded Sri Lanka’s fiscal position that continued normal servicing obligations has become impossible,” the Ministry stated, whilst confirming that meeting current payment requirements was no longer a tenable policy. “The government has taken extraordinary steps in an effort to avoid a resort to these measures, but it is now apparent that any further delay risks inflicting permanent damage on Sri Lanka’s economy.”

The outbreak of war in Eastern Europe in late February lit the touchpaper for a country already mired in a deep economic crisis, with the soaring oil prices resulting from the conflict severely impacting Sri Lanka’s import costs. Food prices have also rallied by around 30 percent in the 12 months through March. As such, there have been widespread reports of food, fuel and medicine shortages—all of which are largely imported by the country—with queues at petrol stations lasting several hours and power blackouts now commonplace. The soaring prices have also meant that annual inflation, which had already been accelerating briskly since October 2021, climbed to 15.1 percent by February before jumping even higher in March to 18.7 percent, the highest in all of Asia.

And with authorities having to divert its currency holdings to alleviate the fuel and food problems, Sri Lanka’s foreign reserves have dwindled to less than $2 billion, despite still owing $25 billion, which is due to be paid to its foreign lenders over the next five years—almost $7 billion is due in 2022. But new central bank governor, P. Nandalal Weerasinghe, who took charge on April 7 after the resignation of his predecessor, has insisted that suspending debt payments will allow the remaining currency reserves to be allocated to those Sri Lankans suffering the most, while negotiations with the International Monetary Fund (IMF) and other creditors, including the Asian Development Bank (ADB), Japan, China and private lenders such as BlackRock, remain ongoing. As such, meeting immediate debt obligations has become “impossible”, the Ministry of Finance acknowledged.

But why has Sri Lanka found itself in such a precarious economic position? The general consensus is that this crisis has been several years in the making, if not longer, thanks to a combination of economic mismanagement, years of accumulated borrowing, political incompetence and downright bad luck. Beleaguered by decades of civil war, which only ended in 2009, the 22 million-strong Sri Lanka remained indebted to its foreign creditors throughout the previous decade as it borrowed heavily to finance an expansionary government spending programme aimed largely at improving public works.

Indeed, Sri Lanka has received no less than 16 loans from the International Monetary Fund since 1965—the most recent being in 2016, which provided the country with $1.5 billion to Sri Lanka over four years contingent upon a structural-reform programme: reduce the budget deficit, tighten monetary policy, weaken the domestic currency to boost exports and slash state food subsidies. But the loan piled even more debt on the country at a time when the economy experienced significant shocks, including heavy monsoons that killed dozens and displaced tens of thousands; a constitutional crisis in October 2018 triggered by then-president Maithripala Sirisena appointing Mahinda Rajapaksa as the new prime minister and dismissing the incumbent Ranil Wickremesinghe; and major bomb blasts in the country in April 2019 that destroyed infrastructure and badly dented the Sri Lankan tourism industry from which it is yet to recover.

Much to the ire of the IMF, Rajapaksa also inexplicably decided to cut taxes in late 2019—the main consumption tax was slashed to 8 percent from 15 percent, corporate tax was trimmed to 24 percent from 28 percent, and other taxes were abolished altogether, including a 2-percent “nation-building tax” designed to finance infrastructure development. Such tax cuts cost Sri Lanka an estimated 2 percent in lost gross domestic product (GDP) and triggered downgrades in its sovereign credit rating, making it significantly more difficult to access funds from international financial markets.

By March 2020, the pandemic had arrived, which had a catastrophic effect on Sri Lanka’s economy as tourism and remittance dollar inflows all but completely stopped, while the contraction in global demand weighed heavily on exports, especially crucial agricultural produce such as tea and rubber. The situation was further exacerbated by a ban enacted in April 2021 by the government on all imports of chemical fertilisers to prevent a depletion of foreign-currency reserves. This fateful decision decimated agricultural production as well as drastically reduced export income, which in turn meant that there was much less income from which Sri Lankans could buy food imports. Although the ban was lifted in November, there has been barely any recovery in chemical fertilisers being used on Sri Lankan farms, and this is expected to lead to an annual drop of at least 30 percent in paddy yields nationwide this year, according to agricultural experts. “That’s where the problem is,” Buddhi Marambe, an agriculture professor at the University of Peradeniya, told Reuters in early March, in reference to the decision to ban chemical fertilisers. “Yields will likely be lower next harvest season as well. So, costs will keep increasing even 4-5 months from now.”

By late February, the IMF had estimated that Sri Lanka had only about one month’s worth of foreign reserves left. To attract currency inflows and appease its foreign creditors somewhat, therefore, the central bank decided on March 7 to devalue its currency by almost 15 percent, which meant fixing the upper limit on the rupee at 230 to the dollar. It also placed import controls on 367 non-essential items, such as fish, footwear and wine, in an attempt to prevent a further drawdown on its foreign-exchange reserves and shore up its ability to repay its outstanding debts. But the currency has plunged even further as the economic situation has continued to deteriorate, such that the rupee has easily become the world’s worst currency performer of 2022.

Widespread protests erupted across the country in March to demand the resignation of President Gotabhaya Rajapaksa—younger brother of Prime Minister Mahinda Rajapaksa. Indeed, until early April, members of the Rajapaksa family were in charge of an astonishing one-third of Sri Lanka’s 28 ministries, including other brothers Basil, who headed up the finance ministry, and Chamal, in charge of irrigation. Matters came to a head on April 1, when the president declared a state of emergency and provided the Sri Lankan military with sweeping powers to arrest and imprison protesters without trial after hundreds of angry citizens attempted to storm his house.

But the protests intensified to such an extent that Rajapaksa revoked the state of emergency less than one week later. Mass resignations of ministers also led to the dissolution of the government’s cabinet on April 3, with some 26 cabinet ministers stepping down, including Basil and Chamal as well as Mahinda’s son Namal. The central bank governor also made way for a replacement. A further cabinet reshuffle has also led to the appointment of four new ministers, with new posts handed out to others as a contingency measure.

“Friends, every second you protest on the streets our country loses opportunities to receive potential dollars,” the prime minister announced during a broadcast on April 11. But it is a plea that has come all too late. It seems likely that Sri Lanka will now require another IMF loan to help it endure the ongoing crisis, which will only mire it in more debt in the long run—as well as more requirements from its lender, such as fiscal tightening, which will almost certainly subject the country’s people to prolonged hardship. The central bank has asked the Sri Lankan diaspora located outside the country to help by sending foreign-currency remittances back to their home country and into bank accounts set up by the government to purchase essentials such as food, fuel and medicine to be distributed among the population. It will also hope for a swift recovery in tourism, which has long been one of its biggest sources of foreign currency. The people of Sri Lanka “have made sacrifices until we completely ran out of reserves and had to do this,” Murtaza Jafferjee, head of the independent Advocata Institute think tank in Colombo, told the Washington Post on April 12. “The people are in a terrible state.”

Fitch has confirmed that a sovereign default-like process has begun. “This reflects the announcement by the Ministry of Finance on 12 April 2022 that it has suspended normal debt servicing of several categories of its external debts, including bonds issued in the international capital markets and foreign currency-denominated loan agreements or credit facilities with commercial banks or institutional lenders,” the ratings agency wrote on April 13. “We will downgrade the LT FC IDR [Long-Term Foreign-Currency Issuer Default Rating] to ‘RD’ once a payment on an issuance is missed and the grace period has expired.”

“There are limited upside scenarios to the ratings currently,” S&P analysts Andrew Wood and Rain Yin wrote on the same day, warning that it could downgrade Sri Lanka into a selective default upon “confirmation that the government has missed a coupon or principal payment on commercial foreign currency debt.” A failure to cover impending debt repayments will likely result in default, S&P added, as would an outright debt restructuring. “Sri Lanka’s debt restructuring process is likely to be complicated and may take months to complete,” Wood and Yin also acknowledged.

Why Apple Has Acquired a UK Open Banking Fintech Firm