Top Posts
Challenges Remain, But There Are Opportunities to Be Had in...
Interview with Mr. Olukayode Pitan, Chief Executive Officer and Managing...
Commodities Outlook for 2023
The Value of Cash in a Time of Crisis: How...
The US-Africa Leaders Summit: Fostering a Closer Relationship with the...
Three Key Sectors in Which to Invest in 2023
Home Finance Debt Transparency and Development
Finance 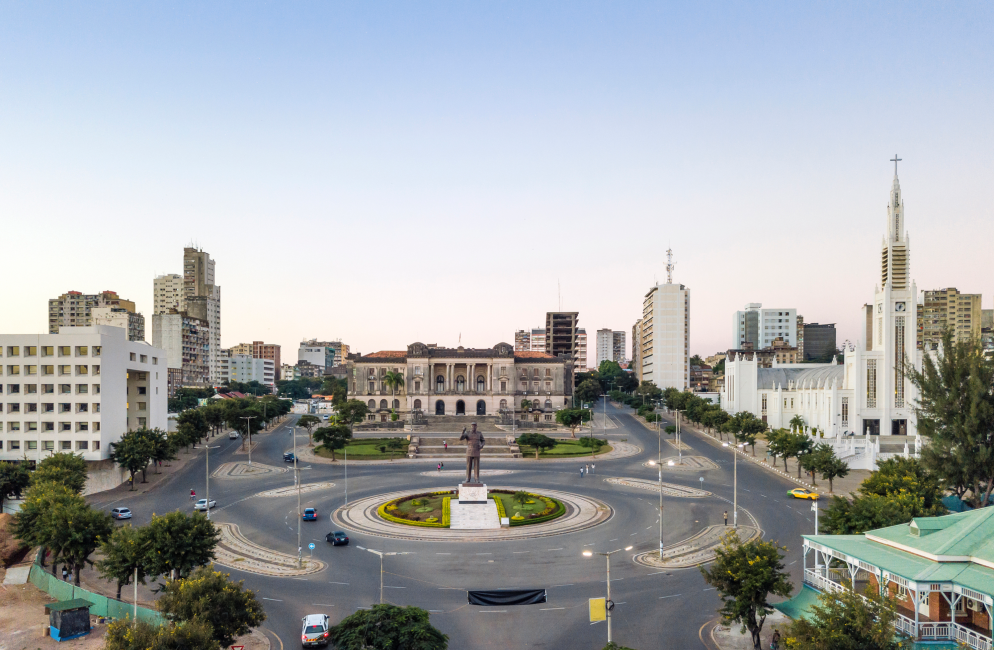 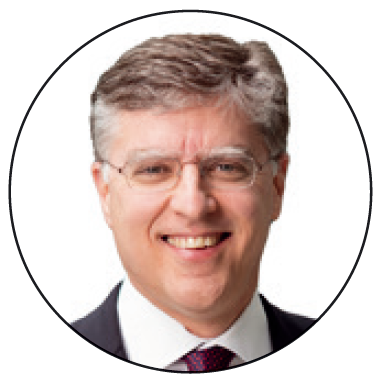 More than 25 years after the Heavily Indebted Poor Countries (HIPC) Initiative was launched, public-debt vulnerabilities have once again risen sharply in developing countries. Since 2013, the number of countries assessed at high risk or in debt distress under the Low-Income Countries Debt Sustainability Framework (LIC DSF) has more than doubled. The COVID-19 crisis has further worsened the outlook.

Yet analyzing public-debt sustainability in low-income countries remains difficult. A recent World Bank report found that 40 percent of low-income developing countries (LIDCs) have not published any sovereign-debt data in the past two years. Information on collateralized debt remains scarce, despite its potentially negative effects on future government revenue.1 Moreover, public-debt workouts often remain opaque and ad hoc. A continuous lack of debt transparency is at the core of all these problems.

The benefits of enhanced debt transparency are clear. Readily available data on public debt allows governments to make informed decisions that support macroeconomic and debt sustainability. Transparency also allows creditors to take informed lending decisions. Moreover, it enables citizens to hold their governments accountable. The availability of information on the use of borrowed proceeds is equally important and supports the effective use of debt for growth-enhancing projects.

The cases of Mozambique and Zambia illustrate why debt transparency is important for macroeconomic stability and development.

In mid-2015, Mozambique authorities announced the restructuring of the “tuna bonds” (stressing that borrowed funds had been misused) that were isolating the country from investors and donors. This announcement also initiated a sharp widening of Mozambique’s bond spreads. In April 2016, the debt exchange for the “tuna bonds” was concluded. At the same time, another two large, previously undisclosed external loans were revealed, and bond yields spiked again in mid-2016. Since then, bond spreads have remained elevated compared with pre-crisis levels. But they have gradually declined as Mozambique has taken significant steps to enhance its debt transparency (Figure 1a). 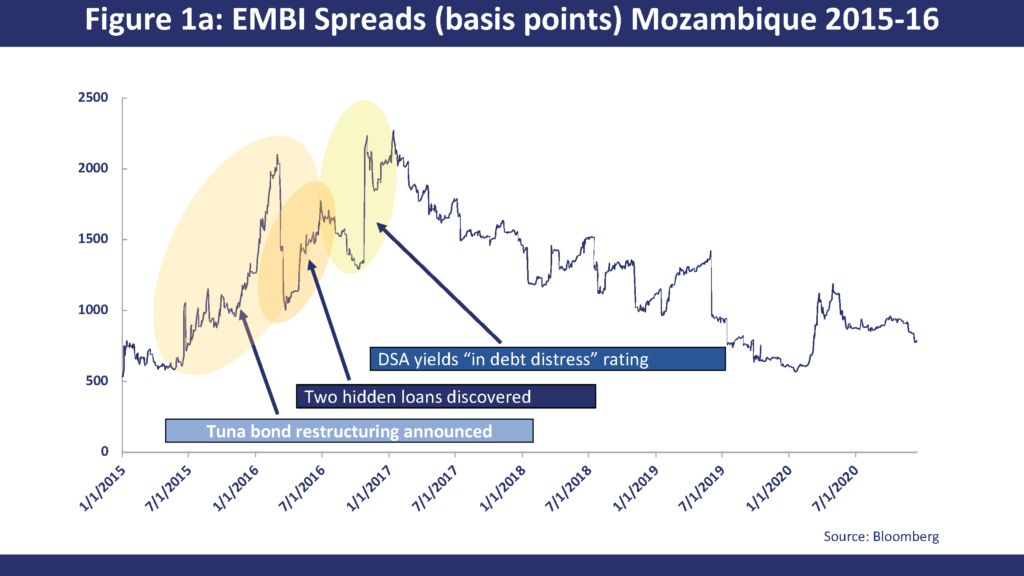 In Zambia, mere uncertainty about debt numbers had negative consequences. Zambia’s weak debt-management framework, including reporting lags and uncertainty regarding debt coverage, led to speculation about the public-debt level. This uncertain environment prompted the market to reprice Zambia’s credit risk, evidenced by the spike in its Emerging Markets Bond Index (EMBI) spread in April 2018, when the government released its annual economic report and provided some clarity on its debt situation. Zambia’s spread continued to rise and skyrocketed in early 2020 due to debt-sustainability concerns (Figure 1b). 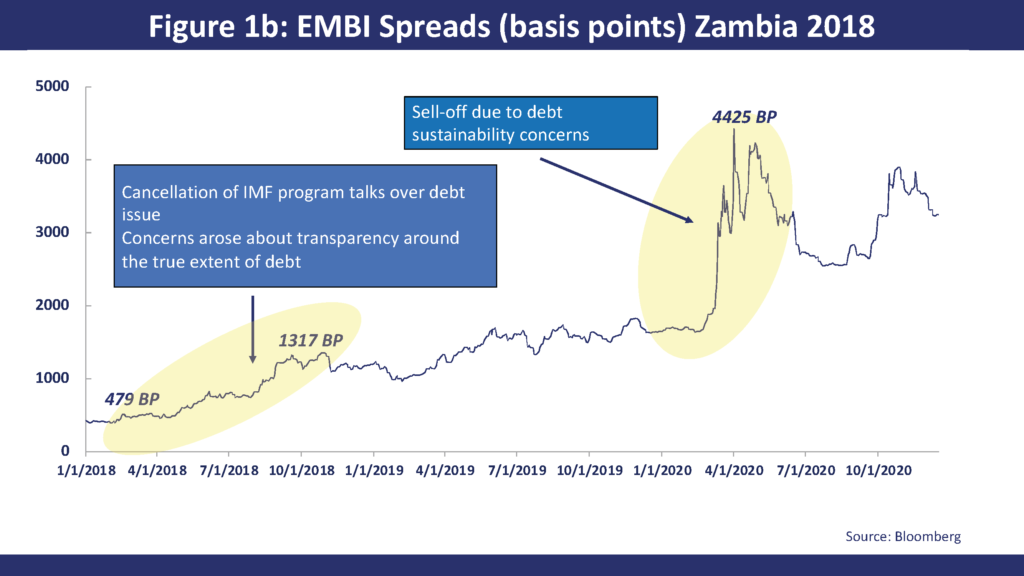 The conclusion from these cases is clear. Enhanced debt transparency plays a critical role in economic development—by preventing debt crises and supporting macroeconomic sustainability and effective use of borrowed proceeds. 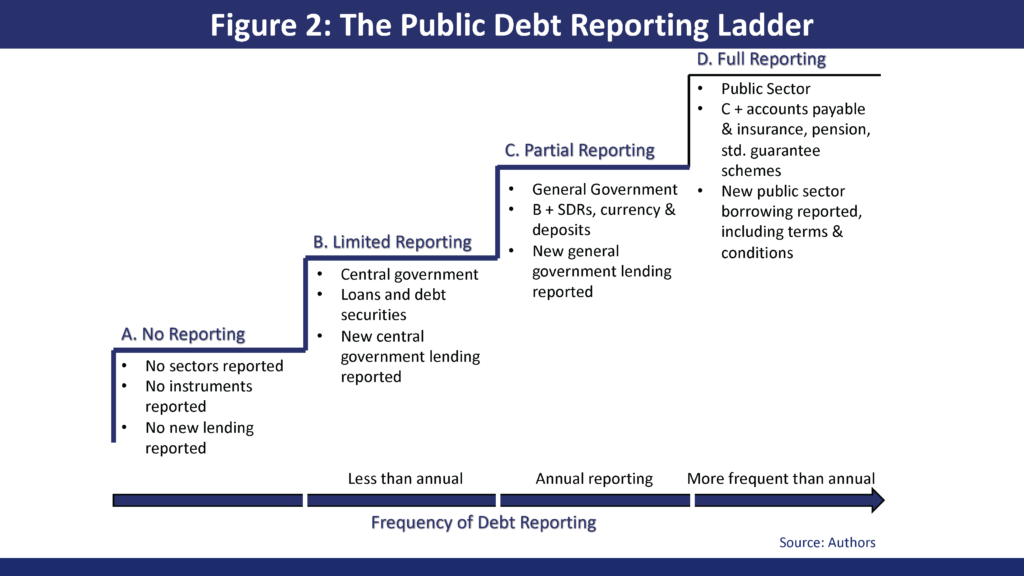 Climbing the debt-transparency ladder requires sound legal and debt-management practices. In particular, a sound legal framework for debt management should include (i) a clear definition of PPG debt (instruments and sectoral coverage in line with international standards), (ii) a clear identification of borrowing purposes and sources from which the government can borrow, (iii) an explicit mandate to undertake debt-related transactions and issue loan guarantees (where applicable), including legal contestability, (iv) a public-sector borrowing framework consistent with that of the central government and (v) coherent audit requirements, including financial and performance audits. Finally, any improvement in debt reporting requires political buy-in and willingness to share detailed debt information.

Finally, enhancing debt transparency requires overcoming fundamental incentive problems. Debt transparency comes with important benefits, including improved financing terms for borrowers and reduced risks for creditors. Nevertheless, enhanced transparency can also have potential costs, including increased public scrutiny (political costs) and higher financing costs for countries that reveal additional debt. The choice of enhancing debt transparency will ultimately depend on whether the marginal benefits of revealing additional information outweigh the marginal costs. This tradeoff is difficult to quantify and is compounded by the remaining uncertainty around the true level of indebtedness in the absence of a credible commitment mechanism, such as a transparency certificate. Uncertainty around the net effects of enhancing transparency may keep borrowers from doing so.

Although enhancing debt transparency is mainly the responsibility of the borrowing country, creditors can also help. Borrowers and creditors can refrain from engaging in non-disclosure agreements or confidentiality provisions that prevent the timely publication of key information. Excessive confidentiality clauses are more likely to arise in the context of commercial (excluding international bonds) and bilateral (non-Paris Club) financing. Marketable instruments, such as international bonds, have strict listing and publication requirements. Project-financing loans—between commercial and bilateral non-Paris Club creditors and borrowers—are more prone to excessive confidentiality clauses to protect specific creditor and/or borrower interests.

No internationally agreed standard exists on what constitutes an excessively restrictive confidentiality clause. In the absence of such consensus, the scope of the disclosure definition included in the debt-transparency principles of the Institute of International Finance (IIF) could serve as a reference point.4 Any clause preventing the borrower from reporting this minimum amount of information would be considered excessively restrictive. Borrowers’ national debt-management legislation could include this minimum public information to clarify up-front the degree of confidentiality accepted. However, it would be useful to establish internationally recognized debt-transparency standards. Countries could self-certify to meet these standards, which might address some of the incentive constraints, as mentioned above.

Creditors, including the World Bank and other international financial institutions, also support debt transparency through their own debt databases. Reporting by creditors on their lending cannot substitute for borrowers’ reporting, but it helps in enhancing transparency and reconciling PPG debt data. The “G20 Operational Guidelines for Sustainable Financing”5 emphasize the need for official bilateral creditors to share information on their lending. In 2019, G20 creditors endorsed a set of financing principles6 to implement the Guidelines, which identify as best practice the publication of loan-by-loan information on lending, including terms and conditions.

Creditors and borrowers need to collaborate to enhance transparency around debt restructuring. This will require a clear mechanism for debt-data reconciliation. The IMF and the World Bank undertook several debt reconciliations during the HIPC process, disclosed detailed country-level information on the implementation of debt relief by creditor and published detailed information on the expected debt relief. Creditors should also disclose the terms and amounts of agreed and implemented debt restructuring.

Finally, international financial institutions will play an important role in assisting creditors and borrowers in enhancing debt transparency. The World Bank has provided guidance to both through a comprehensive public-debt toolkit. More broadly, it will continue to support debtors as they step up the ladder of transparency and economic development.

ABOUT THE AUTHORS
Marcello Estevão is the Global Director of the World Bank Group’s Macroeconomics, Trade and Investment (MTI) Global Practice. Before joining the Bank, he was Deputy Minister for International Affairs at the Ministry of Finance in Brazil and Chairman of the Board of Directors of the New Development Bank (NDB), Shanghai.

Sebastian Essl is a Senior Economist in the World Bank’s Global Macro and Debt Analytics team. His work focuses on debt sustainability, debt policies and fiscal risks. He has additionally been involved in work and technical assistance on public-debt management, including medium-term debt-management strategies and debt transparency.

Vasilis Tsiropoulos is an Economist in the World Bank’s Global Macro and Debt Analytics team. Currently, he is the Lead Coordinator of the joint World Bank–IMF Debt Sustainability Analysis for low-income countries (LIC DSAs). Prior to joining the World Bank, Vasilis worked as an Associate Economist in the Central Bank of Ireland.

Banks Need to Unlock Innovation Faster: This Is the Key