Top Posts
Challenges Remain, But There Are Opportunities to Be Had in...
Interview with Mr. Olukayode Pitan, Chief Executive Officer and Managing...
Commodities Outlook for 2023
The Value of Cash in a Time of Crisis: How...
The US-Africa Leaders Summit: Fostering a Closer Relationship with the...
Three Key Sectors in Which to Invest in 2023
Home Finance Destination Graduation: Secured Credit-Card Graduations Are on the Rise
Finance

Destination Graduation: Secured Credit-Card Graduations Are on the Rise 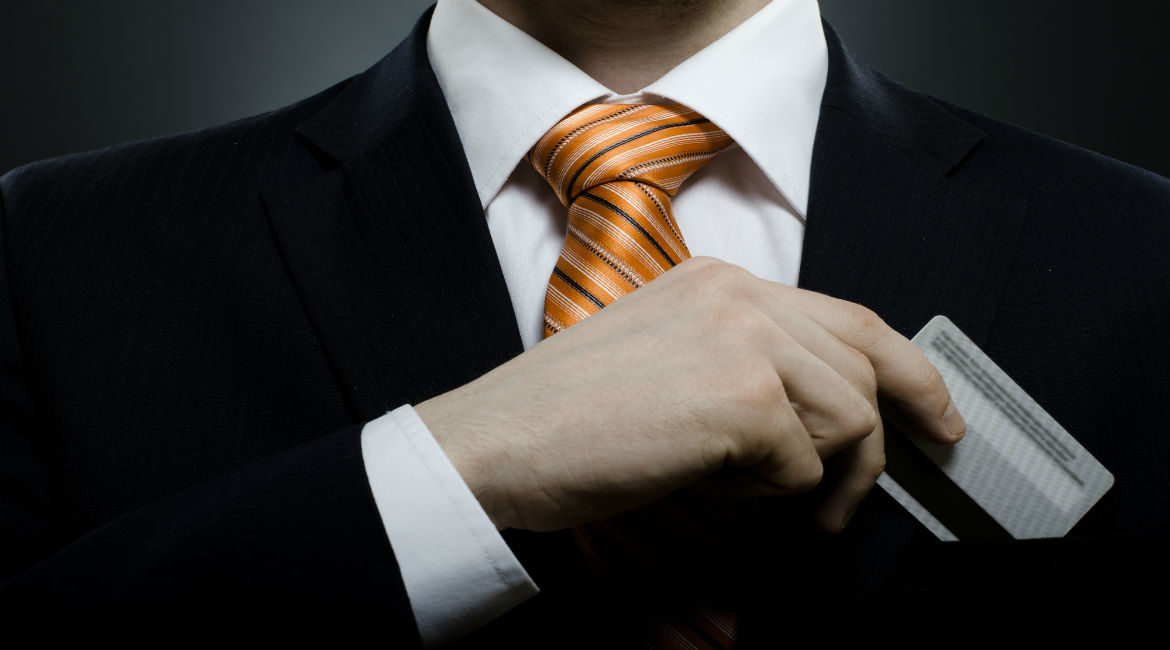 The recent announcement by Amazon and Synchrony Bank to offer secured versions of their popular consumer credit cards has sparked renewed interest in the secured credit-card market. The new cards come at a time when secured-card graduations—upgrades to unsecured cards—are booming. Not only are banks graduating more secured-card customers to unsecured cards, but they are also doing so sooner in the account lifecycle.

This article reviews recent research on secured-card graduations from the Consumer Finance Institute at the Federal Reserve Bank of Philadelphia. The paper, written by Larry Santucci, makes use of data collected by the Board of Governors of the Federal Reserve System since 2012. Over a five-year period, only 20 percent of accounts opened in 2012 graduated to an unsecured card. In contrast, after just 13 months, a full 30 percent of the 2017 cohort had graduated to an unsecured card.

A secured credit card works just like a traditional credit card except that some portion of the credit limit—often the full amount—is backed by a security deposit. The deposit is held at the issuing bank until the secured card account is closed, the funds are liquidated to pay off the balance in default or the secured account graduates to an unsecured account. By holding a security deposit, the bank is able to offer credit to consumers whom it would otherwise reject for having too low a credit score or not having a score at all.

Banks may choose to convert, or graduate, secured card accounts to unsecured accounts once the borrower has demonstrated a history of responsible use. Upon graduation, the consumer’s security deposit is refunded, typically within 60 days. While the criteria for graduation vary by bank, the consumer is typically required to make a series of on-time payments on his or her account and may have to improve his or her credit score beyond some threshold. Later, we discuss several behaviors that were found to be correlated with higher graduation rates.

Graduation represents a significant milestone along the consumer’s credit journey. Whereas he or she once could not be approved for $300 of unsecured credit, a graduated consumer might now have an unsecured limit many times that amount and may also be eligible for a variety of mainstream credit products. In addition, many unsecured credit cards have lower fees and interest charges and more attractive rewards programs.

For these reasons, secured cards are an appealing option for a variety of individuals, including: immigrants and young adults who may not have established credit histories and, therefore, lack credit scores; people who have experienced a prolonged period of inactivity on their credit accounts; and anyone who finds his or her credit score too low to be approved for mainstream credit products.

Recent cohorts of secured credit-cardholders have been graduating to unsecured cards at increasingly higher rates and are doing so within months of account opening. Figure 1 shows the cumulative graduation rate by account age for every annual cohort of secured cardholders since 2012. Starting in 2015 (blue), successive cohorts have achieved a 20-percent graduation rate in fewer and fewer months. In fact, the 2017 cohort (yellow) is the only group in our data to achieve a 30-percent graduation rate, occurring after just 13 months. 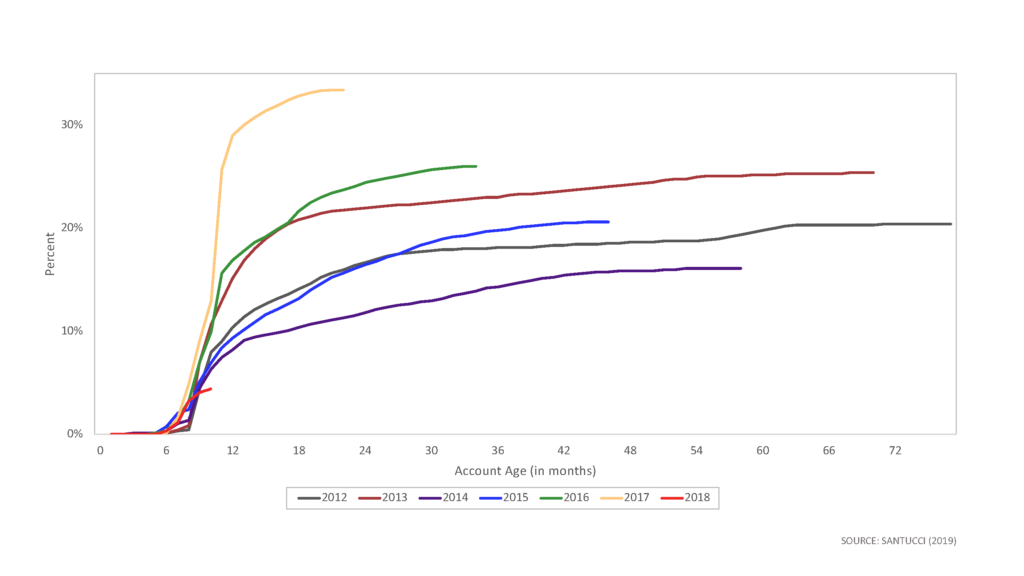 There are several possible explanations for the simultaneous increase in graduation rates and decrease in time until graduation. First, until recently, many banks failed to adequately inform customers about existing graduation policies. Some may have lacked a graduation policy altogether. A 2016 report revealed that secured-card customers were often unclear about their bank’s graduation policy. Second, competition for well-performing secured-card customers may have encouraged banks to reduce the time until account graduation as they sought to prevent attrition to competitors. The 2016 report also noted that consumers who improve their credit scores may be targeted by outside lenders seeking to poach creditworthy customers. Thus, enigmatic account-graduation policies and aggressive marketing by competitors may have prompted banks to clarify their graduation processes, both to themselves and to their customers.

Third, the composition of the pool of secured-card applicants may have improved. A movement toward lower risk consumers applying for secured cards would increase the number of cards qualifying for graduation, independent of any changes on the lender’s side. Figure 2 shows that graduation rates vary greatly depending on the year of account origination (vertical axis) and the consumer’s credit score at origination (colored bars). In the five cohorts that Santucci examines, consumers lacking credit scores at origination (purple) are much more likely to graduate within two years than those with credit scores, implying that unscored consumers pose a lower risk than consumers with scores. For the latter, graduation rates follow a rank-ordered pattern: the lower a consumer’s credit score at origination, the less likely the consumer is to graduate to an unsecured card within two years. 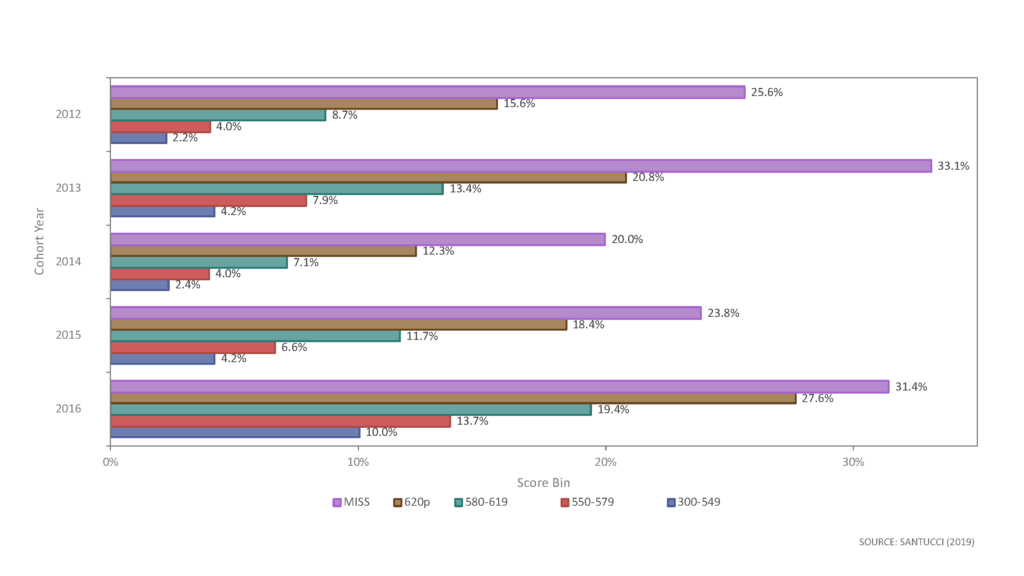 In his paper, Santucci finds that a consumer’s most recent credit score has the largest effect on the probability of account graduation. Higher credit scores are associated with a higher likelihood of graduation, and vice versa. Since credit scores are a function of the consumer’s behavior across all credit relationships—as well as collections, public records and credit inquiries—secured-card accountholders should pay careful attention to anything that might harm their scores while their secured-card accounts are open.

Over the past few years, graduation has become a distinctive feature of secured credit card programs. More graduations means that more consumers are able to use credit cards to improve their financial health. They should also consider checking their credit reports for errors or inaccuracies. Consumers in the United States may check their three major credit reports for free each year at Annualcreditreport.com. Disputes identified at Equifax, Experian or TransUnion can be initiated online.

Build Greenfield: How Traditional Banks Are Breaking the Mould