Top Posts
Challenges Remain, But There Are Opportunities to Be Had in...
Interview with Mr. Olukayode Pitan, Chief Executive Officer and Managing...
Commodities Outlook for 2023
The Value of Cash in a Time of Crisis: How...
The US-Africa Leaders Summit: Fostering a Closer Relationship with the...
Three Key Sectors in Which to Invest in 2023
Home Finance Economic Policy: the Key to Prolonged Global Economic Growth
Finance 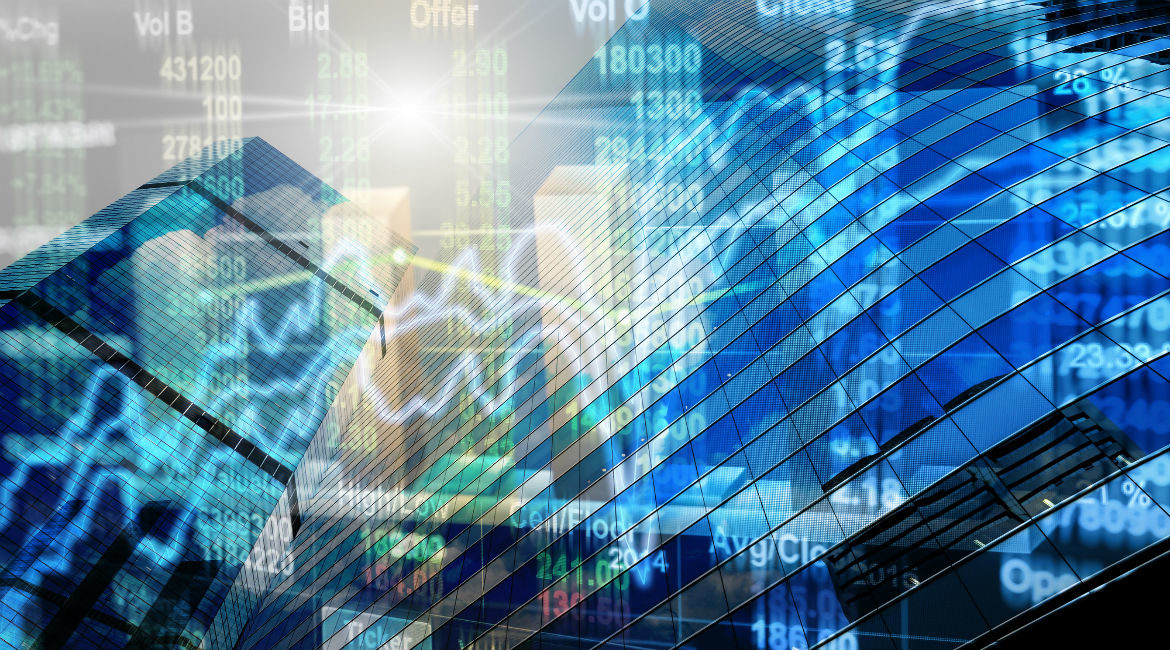 Just as the world economy has strengthened, the quality of the economic debate has weakened—and this poses a significant obstacle to robust sustained economic growth in the future.

The global economy today enjoys robust health. The International Monetary Fund (IMF) noted in January that we are experiencing the broadest synchronized upswing since 2010—when we bounced back from the Great Recession. In the United States, the unemployment rate has dropped below 4 percent, and business confidence remains at very high levels. The United Kingdom has defied predictions that the Brexit referendum would quickly trigger a recession. The eurozone has enjoyed a strong cyclical upswing—although recent data suggest the recovery has peaked. Most major emerging markets also appear to be in good shape. 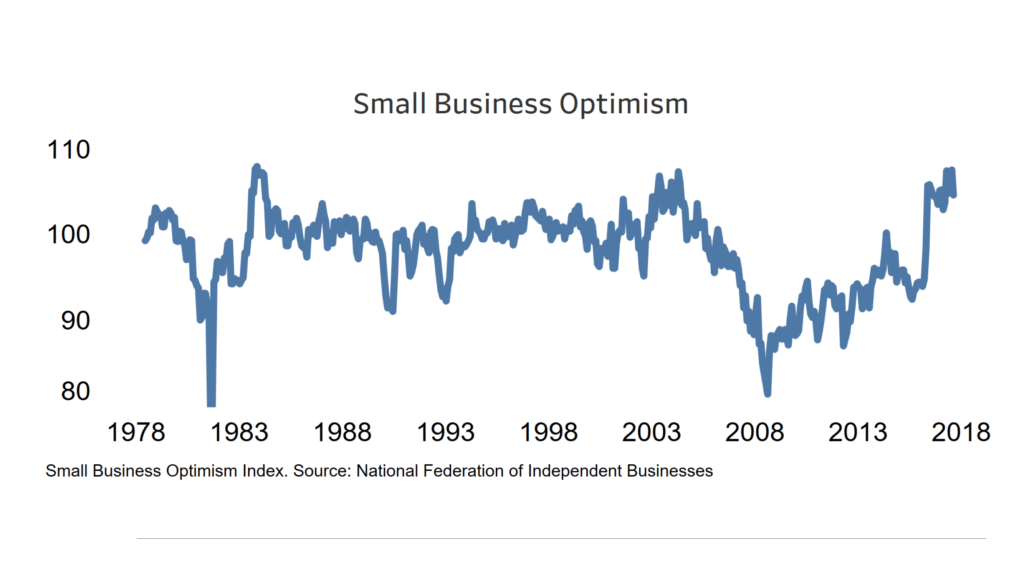 This economic performance owes a lot to policy support, especially from advanced economies’ central banks. Growth has been supported by ample liquidity and record-low borrowing costs, while productivity growth across OECD (Organisation for Economic Co-operation and Development) economies has decelerated significantly. To ensure robust and sustained economic growth over the coming two decades (through the normal ups and downs of the economic cycle), we will need to tackle a number of structural economic policy challenges. To name just a few:

There is no shortage of economic policy challenges. They need to be confronted in an environment characterized by two important sources of uncertainty and disruption: (1) a substantial rebalancing of the global economy: emerging markets now account for about 60 percent of world GDP (gross domestic product) versus 40 percent for advanced economies; 20 years ago those proportions were exactly reversed and (2) the technological disruption brought by the fourth industrial revolution, which is just beginning to make itself felt.

Against this background, the economic policy debate has become muddled, polarized and politicized. This makes it a lot harder to rationally assess the pros and cons of different policy choices, to gauge the risks and opportunities of different courses of action. A few examples:

Just two years ago, there was a broad consensus among economists that the US and others should launch a fiscal expansion in order to support the global economic recovery. The editorial page of the Financial Times made an especially strong case for a loose fiscal stance, arguing that “the austerity obsession, even when borrowing costs are so low, is lunatic” in an article that suggested “helicopter money” should also be given consideration (a fiscal expansion financed directly and permanently by central bank money creation). The IMF also supported a looser fiscal policy stance. Both US presidential candidates in 2016 had fiscal expansion as part of their platforms.

Launched by the new US administration, the same fiscal expansion has been promptly criticized by the IMF as procyclical, and the Financial Times called it “an act of folly”.  Governments are now criticized for not having reduced debt levels right after they had been spurred to raise them. Has the economic outlook changed dramatically? It has not. True, economic growth was weaker in 2016, but policy is forward-looking, and two years ago the IMF forecast 3.8 percent average global growth for 2018-21, exactly the same growth rate it is forecasting now. With the same economic forecast, fiscal stimulus has somehow shifted from an absolute necessity to an act of madness. Sadly, this suggests it is the policy debate that has lost its sanity.

International trade provides a second example. For the last few years, Germany’s current account surplus has been singled out as a key source of eurozone vulnerability and global economic imbalances. Prominent economists and financial media argued that by running a bilateral trade surplus against other eurozone members, Germany forced them to run matching trade deficits, and therefore forced them into excessive private and public spending and rising debt levels.

Now that the new US administration has adopted the same line, the focus on bilateral-trade balances has been condemned as economic nonsense—by the same experts, media and institutions. This kind of politicized, knee-jerk response to complex policy issues is irresponsible. It clouds the debate, and undermines the already shaky reputation of technical experts among the broader public.

Is the current US fiscal stimulus procyclical? Yes. But this was obvious two years ago as well. There is a risk that it will cause the economy to overheat and rekindle inflationary pressures—but many economists have been arguing that we should allow the economy to “run hotter for longer”, exactly because faster wage growth would be a welcome development. Moreover, there is a good chance that the fiscal expansion—especially the corporate-tax cut—will contribute to an acceleration in fixed investment, which in turn could help rekindle productivity. Longer-term debt dynamics are a concern, and the US needs to debate options to bring health care and Social Security spending under control as the population keeps aging. This was true before the US elections, and remains a priority today. Calibrating the appropriate fiscal stance, the right level of taxes and expenditures, and the right mix of tax measures and expenditure priorities, is a crucial and complex challenge that deserves an honest debate.

Similarly, there is no doubt that unilateral tariffs are crude and costly ways to address trade imbalances, and that a trade war would imperil global economic growth. But it is a fact that the US has one of the lowest tariff levels in the world: an average 3.5 percent on an applied MFN (most favored nation)basis according to the WTO (World Trade Organization), compared to 5.1 percent for the European Union (EU), about 10 percent for China and more than 13 percent for Brazil and India. When these tariff levels were negotiated, large emerging markets were poorer, their economies a smaller share of the global economy. Allowing emerging markets to maintain a more protectionist stance to help them accelerate their economic development was fair and in the global interest. 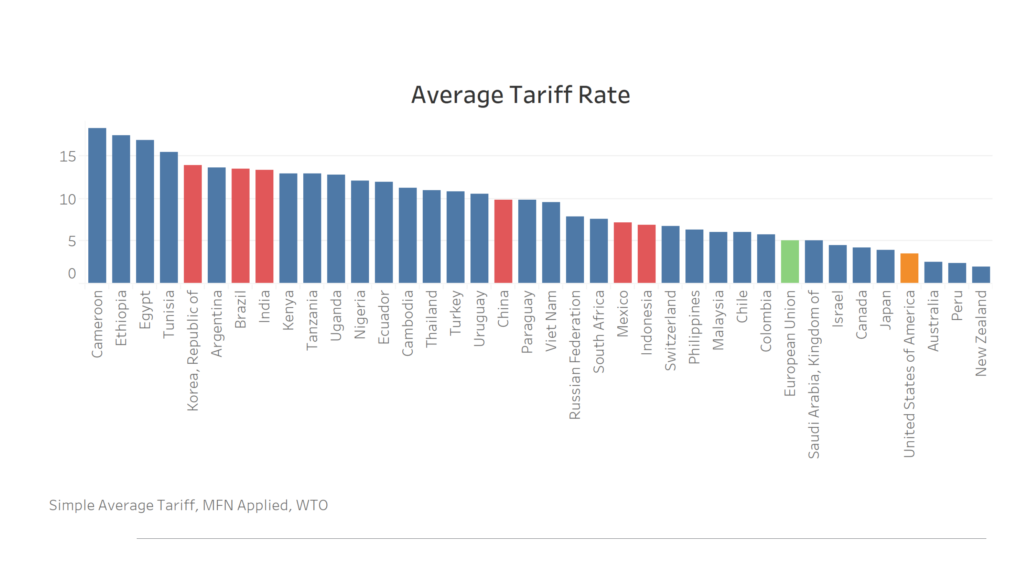 Over the last 20 years, emerging markets have enjoyed a substantial rise in living standards; the share of people living in poverty has been halved, lifting one billion people from abject misery and reducing global income inequality. We now have large middle classes in the main emerging markets. This has come at the cost of significant displacement of large numbers of workers in specific segments of the US and EU labor markets. (In the case of the US, this “China effect” has been documented, for example, by Autor, Dorn and Hanson). As emerging markets come to play a much greater role in the global economy, we should expect them to rely less on tariffs, local content requirements and a cavalier attitude to advanced economies’ intellectual property. This has not happened yet.

We need to redesign global economic institutions in a way that gives emerging markets a greater voice, and leads them to shoulder correspondingly greater responsibility and accountability. In a way that safeguards the benefits of free trade while offering better protection to those displaced by global competition. Again, this is a complex challenge that warrants an honest debate, not alarmist headlines claiming trade wars are imminent and inevitable.

At the same time, national economies need to cope with the nascent digital-industrial innovation. The advent of new digital technologies in industry will be transformational. It will open up enormous potential for greater efficiency and productivity; but it will also disrupt a broad range of industries. Companies will need to understand which new technologies are best suited to their needs, and how to deploy them. Policymakers will need to set new priorities on infrastructure, education and social spending. Addressed through an informed and intelligent discussion, the digital-industrial revolution can deliver a new phase of accelerated economic growth. In a context of fear and partisan accusation, the debate risks being reduced to overhyped fears of imminent mass unemployment and endless discussions on harebrained proposals, such as universal basic income.

The world economy today is strong; a number of structural fragilities need to be addressed, but we have two major positive factors to leverage: new digital-industrial technologies and the fact that thanks to the progress registered by key emerging markets, global growth is more balanced and diversified than ever before. To leverage these strengths and successfully meet the challenges, we need to bring sanity and honesty back into the economic policy debate.

Accounting for the Cobalt Boom

How AI Is Disrupting the Banking Industry