Top Posts
How Gamification is Catapulting Digital Banking to the Next Level
Challenges Remain, But There Are Opportunities to Be Had in...
Interview with Mr. Olukayode Pitan, Chief Executive Officer and Managing...
Commodities Outlook for 2023
The Value of Cash in a Time of Crisis: How...
The US-Africa Leaders Summit: Fostering a Closer Relationship with the...
Home Finance Economic Warfare: A Preferable Alternative to Military Conflict?
Finance 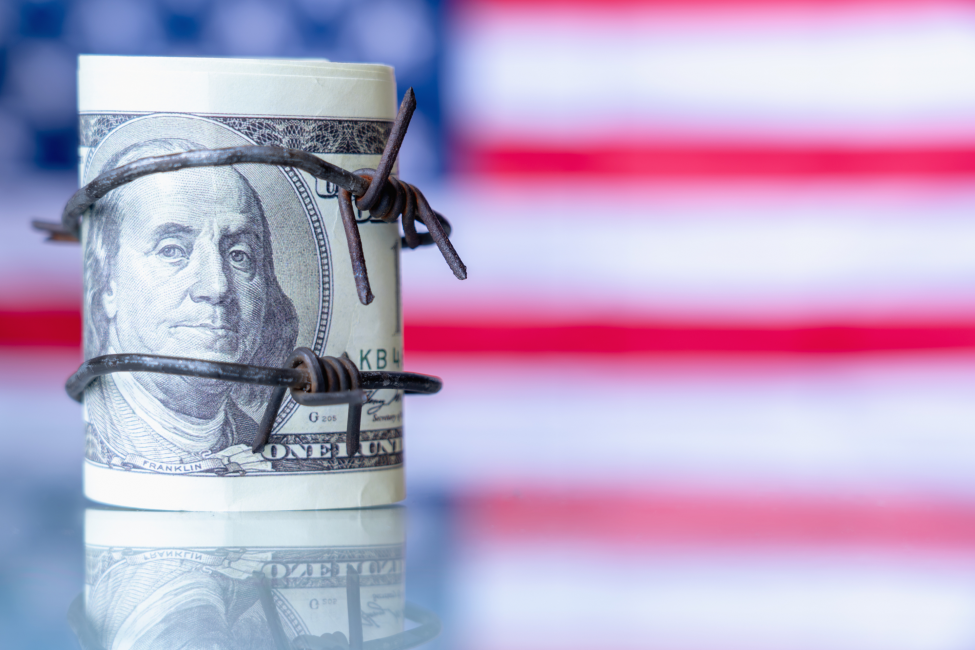 On June 23, the United Nations General Assembly met at the UN headquarters in New York City, where the overwhelming majority of national representatives present called for the 29th consecutive year for the United States to end its 60-year embargo on Cuba. On this occasion, 184 nations voted in favour of the resolution to end the blockade, while only two members—the United States and Israel—voted against it. Three nations—Brazil, Colombia and Ukraine—abstained from the vote.

During such a precarious time, with the COVID-19 pandemic continuing to wreak havoc across much of the world, proponents of the resolution argued that the embargo severely damages Cuba’s ability to combat the spread of the virus. Cuba’s minister of foreign affairs, Bruno Rodríguez Parrilla, described the blockade as a “massive, flagrant, and unacceptable violation of the human rights of the Cuban people” and “an economic war of extraterritorial scope against a small country already affected in the recent period by the economic crisis derived from the pandemic”.

Such a description goes a long way towards explaining how economic warfare works. The blockade represents just one form of economic warfare widely used as a foreign-policy tool by economically powerful nations against their adversaries. And while it may not have as long a history of usage as military warfare, it has nonetheless been a key strategy employed in many of the most important events of the 20th and 21st centuries.

Even during World War II, economic warfare was effective in achieving its aims. “Since December 7, 1941, we have been openly at war. All our forces, military, economic and moral, are now engaged, without disguise and without qualification,” wrote Percy Bidwell, director of studies for the US Council on Foreign Relations, in 1942 in Foreign Affairs magazine. “But even before the attack on Pearl Harbor we were using economic weapons to weaken our potential enemies and to help our potential allies. In the two-year interval of non-belligerency, we set in motion various emergency devices to control our international economic relations: export control, the freezing of foreign funds, blacklisting, shipping control.” Bidwell also accounted for using such economic weapons initially in a defensive context in the hope of staving off having to fight in a war. But once Germany grew in might across Europe and Japan gained ground through Asia, “…economic warfare was converted from a substitute for fighting into a preparation for armed conflict”.

Fast forward to today, and economic warfare has only expanded in scope and sophistication. Indeed, the likes of embargos, sanctions and tariffs have become crucial weapons in the foreign-policy arsenal of superpowers such as the US and China. And while they may seem like a gentler option than all-out military conflict, they invariably have serious repercussions for the recipient nation. Describing the US embargo on Cuba, for example, Spain’s UN delegation said it has a “detrimental impact on the country’s economic situation and negatively affects the standard of living of the Cuban people”. And Indonesia’s representatives described the blockade as one that “violates norms and principles of international law and sovereign equality of states” and hinders Cuba’s recovery from the pandemic.

Indeed, many consider such policies as having just as much of an impact on civilian populations as having “boots on the ground”. According to Mr. Parrilla, such methods have violated the human rights of Cubans for decades, while neighbouring Venezuela has also seriously felt the impact of economic actions taken by the US in recent years, having similarly been constrained by an embargo on its oil industry. “It is primarily US economic sanctions that have been the cause of the worst economic collapse in Venezuelan and perhaps Latin American history,” Alexander Main, director of international policy at the Center for Economic and Policy Research in Washington, DC, recently told independent news outlet Venezuelanalysis.com. “This is important because most of the media regularly publishes articles about Venezuela’s destroyed economy, and the human costs, with barely a mention—and often no mention at all—of sanctions. But the truth is, Venezuela could have the best economists in the world, and do everything right, and the economy would still not recover under the sanctions that are currently cutting the country off from the international transactions that are necessary for the economy to function normally.”

Indeed, sanctions are among the most widely used methods of economic warfare. According to the Council on Foreign Relations (CFR), governments and multinational bodies impose economic sanctions to try to alter the strategic decisions of state and nonstate actors that threaten their interests or violate international norms of behaviour. “National governments and international bodies such as the United Nations and European Union have imposed economic sanctions to coerce, deter, punish, or shame entities that endanger their interests or violate international norms of behavior,” the US foreign policy think tank noted. “Sanctions have been used to advance a range of foreign policy goals, including counterterrorism, counternarcotics, nonproliferation, democracy and human rights promotion, conflict resolution, and cybersecurity.”

The US-led sanctions imposed by Western powers on Iran provide another example of this strategy. Since the revelations of Iran’s nuclear programme back in 2002 and the International Atomic Energy Agency’s (IAEA’s) subsequent lack of confirmation that the programme was not for the development of nuclear weapons, the UN Security Council imposed increasingly stringent sanctions on Tehran in a bid to encourage greater nuclear compliance and transparency. The United States and European Union (EU), in particular, have implemented sanctions on Iran’s oil exports and financial institutions, thereby crippling a hefty chunk of Iran’s economic output. Sanctions were eased during the Obama Administration’s 2015 Joint Comprehensive Plan of Action (JCPOA) nuclear deal with Iran, but President Donald Trump then reimposed all the sanctions during his term in office.

“This makes no sense. Sanctions are economic warfare,” as Congresswoman Ilhan Omar of the U.S. House of Representatives put it last year on Twitter. “They have already caused medical shortages and countless deaths in Iran. You cannot claim to want deescalation and then announce new sanctions with no clear goal. This is not a measured response!” Indeed, Iran’s economy has consistently contracted since 2017, shrinking by almost 5 percent in 2020. While it might be difficult to gauge what the numbers would have been had there been no sanctions, former US special representative for Iran, Elliott Abrams, believes it is clear that such economic measures have had a major restrictive impact on the Iranian economy and government budget as well as reduced Iran’s ability to sell oil and prevented it from repatriating money from energy sales. “There are billions of dollars sitting in banks in Iraq and China and South Korea…that Iran cannot get its hands on due to the sanctions,” Abrams told CNBC in March.

And those who advocate for economic warfare as a replacement for the more abrasive military approach may end up seeing traditional warfare in Iran playing out anyway. Although those who are struggling under Iran’s repressive regime are unlikely to launch a revolution with Iran’s mullahs having crushed all domestic unrest with decisive force, Shika Dhalmia of libertarian think tank Reason Foundation argued last year in the Reason publication that “the bigger problem, however, is that ‘maximum’ economic warfare makes actual warfare inevitable. This is partly because no sitting regime can accept the ignominy of such hostility and partly because, in the absence of mutually beneficial commerce with enemies, the cost of retaliation greatly diminishes. As they say, if goods can’t cross borders, soldiers or bullets will.”

Apart from the US, perhaps no country is using its economic influence on the world stage today more than China—and if not, then it’s certainly doing so a whole lot more than it was only a decade ago. For instance, the Asian heavyweight has used economic might as the largest customer of Australia’s exports to make serious threats against the country, including imposing an economic boycott of its wine and beef as well as slapping tariffs on Australian barley and blocking imports of its meat products.

And, of course, the trade war in which China is engaged with the US continues to rumble on, recently marking its third anniversary and showing little end in sight. “If warfare in the 20th century was often cold, then in the 21st century the struggle between major nations will be fought on the field of trade, capital markets, and finance,” Aaron Klein, senior fellow in Economic Studies at the Brookings Institution, wrote in 2018. “By this metric China and the US have already been in conflict for years, with China pegging its currency to the dollar, which gave it a trade advantage at certain periods. The tariffs are an escalation, but the fighting has moved into the economic battlefield.”

Looking around the world today, however, reveals that not all fighting is done on the economic front—it also reveals just how far the world remains from achieving a decisive end to physical warfare. Recent flare-ups in the Middle East, including the Saudi-led coalition’s battles in Yemen and Israel’s conflict in Gaza as well as the major armed conflict in the Tigray Region of Ethiopia, only underline that such conflict—and bloodshed—remains prevalent. Indeed, even China has threatened Australia with unleashing ballistic missile strikes should it be drawn into a military conflict over Taiwan. Whether it would follow through on such threats with decisive action remains to be seen. Nonetheless, such rhetoric strongly suggests that military conflict is far from being a strategy that has been fully consigned to the past.

In the meantime, the expansion of economic warfare may well be a more humane foreign-policy alternative in certain circumstances.