Top Posts
Malaysia’s Fight Against Climate Change: Perspectives from a Central Banker
Crypto-assets and the Relevance of International Private Law
Whither International Banking Regulation?
Interview with Mr. Selman Bicaco Urrutia, Head of Private Banking...
Interview with Ms. Jelena Galić, Chairperson of the Board of...
The International Banker 2022 Western & Eastern European Awards Winners
Home Finance Emerging Markets Are Pressed for Liquidity, but Central Banks Don’t Issue the Currency They Need the Most
Finance

Emerging Markets Are Pressed for Liquidity, but Central Banks Don’t Issue the Currency They Need the Most 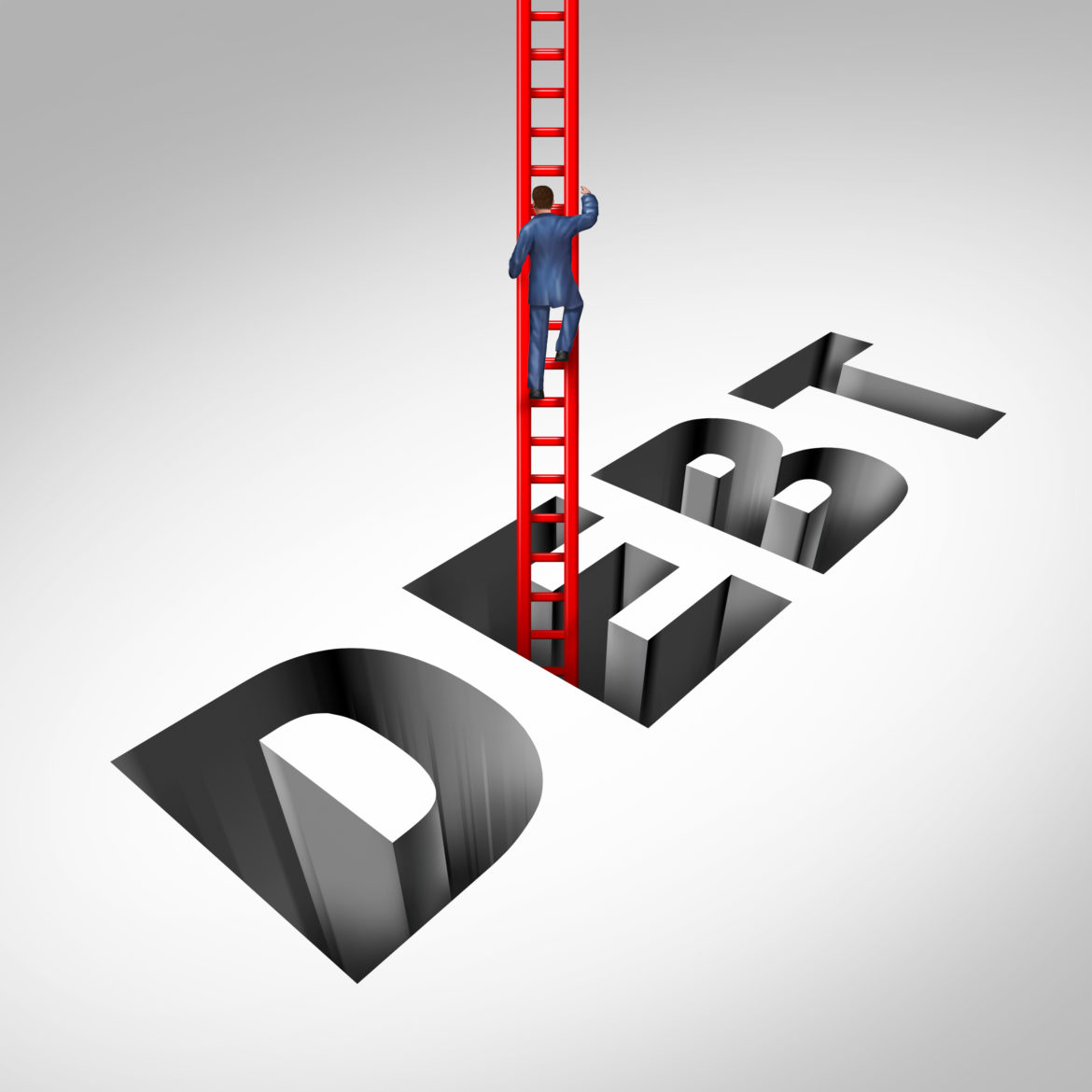 By Liliana Rojas-Suarez, Director of the Latin America Initiative and a senior fellow at the Center for Global Development

The COVID-19 crisis has created an unprecedented demand for liquidity from financial institutions, corporations and households around the world. As a response, central banks have taken a large number of measures to provide liquidity support for the functioning of financial markets and the economy. These actions include reductions in interest rates and reserve requirements, injections of liquidity through quantitative-easing (QE) measures and credit provision to financial institutions and small and medium-sized enterprises (SMEs). Advanced economies and emerging markets alike have embarked on these types of policies, although the scope and size of QE measures are broader in the former than in the latter. The response of the US Federal Reserve (the Fed) to the “Great Lockdown” is perhaps the best example of an extremely active central bank willing to do whatever it takes. Indeed, the extent and scope of the Fed’s liquidity support[i] amounts to a de facto unlimited supply of liquidity (underwriting the sovereign through unlimited purchases of government debt and including purchases of corporate bonds) for as long as it is needed.

But while the demand for liquidity in the United States and other advanced economies is mostly for the currencies issued by their central banks, the demand for liquidity in emerging markets goes well beyond their local currencies. To a considerable extent, emerging markets’ current needs are for hard currencies (currencies that are internationally tradable and highly liquid), especially the US dollar—currencies that their central banks do not issue. This urgent need arises because the COVID-19 global crisis is cutting external sources of finance that corporations and governments require to fund imports (net of exports) and to make good on payments due on outstanding debt obligations.

Except for a group of countries that were experiencing severe crises before the onset of the COVID-19 shock (notably, Argentina), over the last few years, net private capital flows were a primary source of external financing for a large number of emerging markets. Albeit with significant volatility—for the aggregate of emerging markets, net capital flows financed current account balances and allowed for the accumulation of international reserves. For example, in 2016-17, when emerging markets as an aggregate (excluding China) were running sizeable current account deficits, net private capital inflows were large enough to not only finance these deficits but also to allow for increased holdings of international reserves.

In a rapid turn of events, net capital inflows to emerging markets have dried up for all but a few countries. As reported by the Institute for International Finance (IIF), emerging markets experienced capital outflows of about 100 billion dollarsii from the onset of the current crisis to mid-April 2020, already more than three times the outflows during the entire global financial crisis of 2008. The IIF forecasts that net capital flows by the end of 2020 will remain negative.

The limits of central banks’ policies

In a context in which US dollar funding is being squeezed, a few central banks from emerging markets have been providing some foreign exchange (FX) liquidity, auctioning FX swaps (in dollars), the process through which international reserves are sold and bought back in 60 days or more. Colombia[iii] and India[iv] are two recent examples. But these operations have remained in very limited quantities.

There are two reasons for these limitations. First, a common factor affecting all countries is deep uncertainty about the duration and depth of the shock, making central banks cautious about when, and to what extent, to use their stocks of international reserves.

Second, for many emerging markets, caution by central banks about using their reserves is also motivated by the fact that the COVID-19 shock has exposed a major vulnerability: their large stocks of external debt. Indeed, since 2010, external-debt obligations (securities and loans) by the main emerging markets ballooned to approximately US$8.7 trillion ($6.7 trillion, excluding China)[v] by the end of 2019. The bulk of it, about 80 percent, is denominated in US dollars. This huge increase in indebtedness by the public and private sectors from emerging markets was facilitated by the exceptionally low interest rates in advanced economies since the 2008 crisis, encouraging international investors to search for yields through purchases of debt securities issued internationally by entities from emerging markets, where yields were significantly higher.

Concern about the capacity of governments and corporations to roll-over maturing debt, not only in the next few months but also in 2021—when there will be a spike in dollar-denominated maturing debt—poses an important constraint on the usage of central banks’ reserves now. These fears have been exacerbated by the large number of downgrades of sovereign debt by credit-rating agencies. For example, in the last three months, S&P Global Ratings has downgraded the sovereign ratings (or negatively changed the outlook) of 29 emerging markets.

Caution on the use of international reserves implies allowing the currency to depreciate and act as the main shock-absorber. And, indeed, many central banks have done just that, and currency depreciations of more than 20 percent have not been rare. However, in countries with large dollar-denominated net liabilities, central banks might try to prevent further depreciations of their currencies near the time when large debt payments are due since depreciations increase the costs for firms and governments to acquire dollars. A revival of the phenomenon known as fear of floating observed in many emerging markets in the 1990s and early 2000s cannot be discarded in the foreseeable future. Substantial decreases in holdings of international reserves might ensue then.

It is important to clarify, however, that not all countries are equally vulnerable to the shocks. Central banks’ constraints are larger for those with larger external financial needs. A common indicator of these financial needs is the ratio of current account deficits plus short-term debt to international reserves. Central banks in countries such as Argentina, Turkey, Tunisia and Pakistan face severe limitations in the scope of their policy actions. In the first three countries, the existing stock of reserves does not even cover the amount of outstanding external short-term debt obligations. In contrast, central banks in Brazil, Indonesia, Peru and Thailand have more degrees of freedom for choosing their monetary-policy responses. 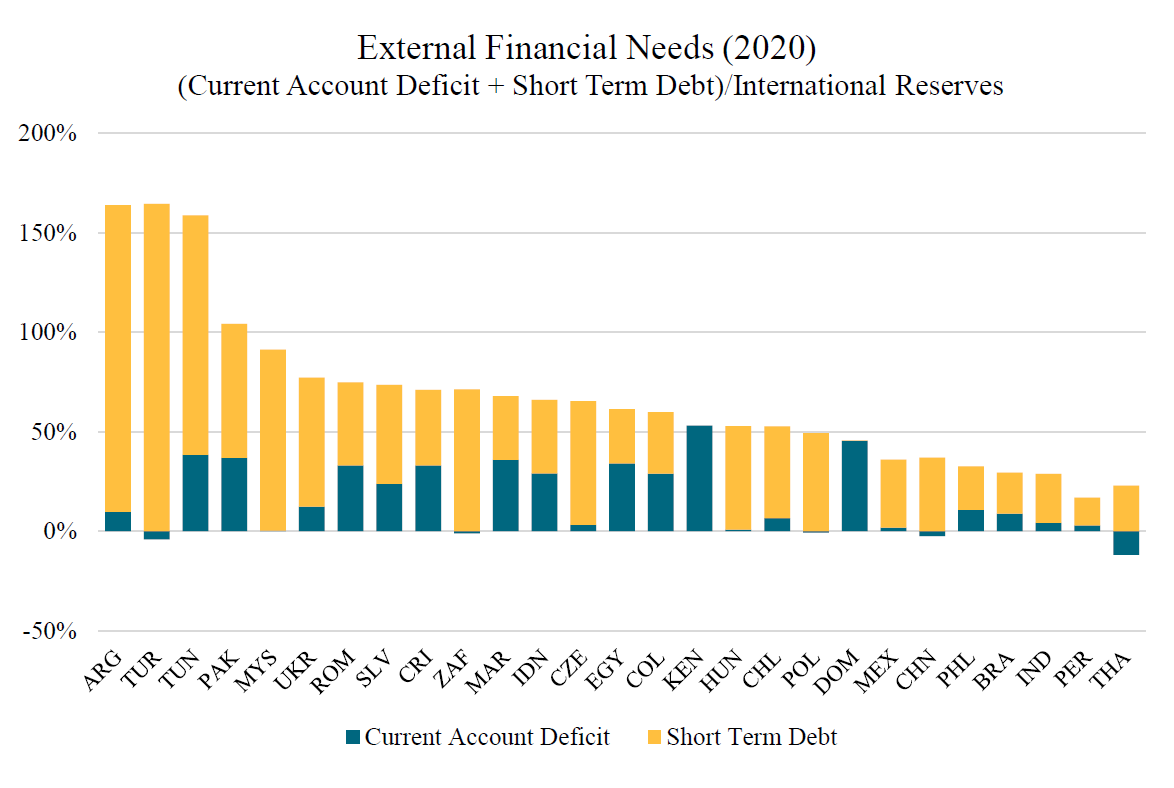 To quote IMF (International Monetary Fund) Managing Director Kristalina Georgieva, the COVID-19 pandemic is a crisis like no other,[vi] and so is the global financial uncertainty it has created. Some emerging markets, those with macroeconomic indicators that were strong at the beginning of the crisis, have so far kept their access to the international capital markets (for example, on April 16, Peru placed bonds valued US$3 billion[vii]), and this will undoubtedly help. But if the crisis lingers and investors’ risk aversion intensifies, even good performers might find out that good macro is not enough. Their central banks’ inability to issue hard currency poses an additional constraint on top of those faced by advanced countries. A critical question is, therefore, how can emerging markets get access to hard currency, especially dollars, as funding from the international capital markets vanishes?

For just four emerging-market economies—Brazil, Mexico, Singapore and South Korea—this challenge has been eased recently. These countries have been granted access to a provision of liquidity by the Fed. On March 19, the Fed announced temporary US dollar liquidity arrangements (swap lines[viii]) with central banks from a limited number of countries. Most central banks involved, however, are from advanced economies.

For the rest of emerging markets, the IMF is the natural provider of much-needed dollar liquidity. The institution is at the center of the global financial safety net and has a number of mechanisms in place to facilitate access to hard-currency liquidity—such as the Flexible Credit Line (FCL[ix]), the Precautionary and Liquidity Line (PLL[x]) and the newly approved Short-term Liquidity Line (SLL[xi])—as well as for supporting countries in crisis to solve balance-of-payments problems, often involving unsustainable public-debt positions (such as the Stand-By Arrangement[xii]). While the former are lines of credit extended to countries with sound macroeconomic fundamentals and have no conditionality attached, the latter involves a comprehensive set of policies that countries agree to pursue in order to solve their existing difficulties.

As this time, usage of all instruments is needed, but, as the current crisis evolves and the number of emerging markets with urgent needs for hard-currency liquidity increases, not only might new facilities be needed, but existing ones might need additional funding. Recognizing these challenges, there is a broader call, including from prominent political figures and Nobel Laureates[xiii], for enhancing the role of the IMF by augmenting its resources by about 500 to 600 billion of SDR (Special Drawing Rights, the international reserve asset created by the IMF, the value of which is based on a basket of five currencies: the US dollar, euro, renminbi, yen and pound sterling; currently 1 SDR = 1.37 US dollars). Whether this sensible recommendation will be adopted in time to provide the support that emerging markets need now and into the future is an open question. At the technical level, it can be done. At the practical level, it meets the hardest constraint of all: lack of political will by some major shareholders at the IMF, particularly the United States government.

An important lesson already derived from the crisis is that the stability of the global financial system, in general, and that of emerging markets, in particular, need the IMF as a true lender of last resort. While essential, all types of self-insurance mechanisms (such as accumulation of foreign exchange reserves and fiscal-stabilization funds) as well as market-based insurances (such as contingent lines of credit with international banks) may prove insufficient in the presence of a large adverse shock. The fundamental reason for this is that emerging markets do not issue hard, liquid currencies but use them extensively in financial and trade transactions. And this feature is not going to change any time soon. Hence, the urgent need for technical ability and political will to fuse together and allow the IMF to lead with certainty in the most uncertain of times.

Are We Witnessing the Death of Coal?