Top Posts
Is There a Digital Currency on the Horizon for the...
Eurozone Inflation Soars to a Record 8.6 Percent in June
Why Fintech Has a Role to Play in the Cost-of-Living...
Global Military Spending Hits a Record High
Could Big Tech’s Iron Grip on Digital Advertising Soon Come...
Can Recent Oil Discoveries Prove to be a Boon for...
Home Finance Why Is the Euro at a Nine-Year Low Against the Dollar?
Finance 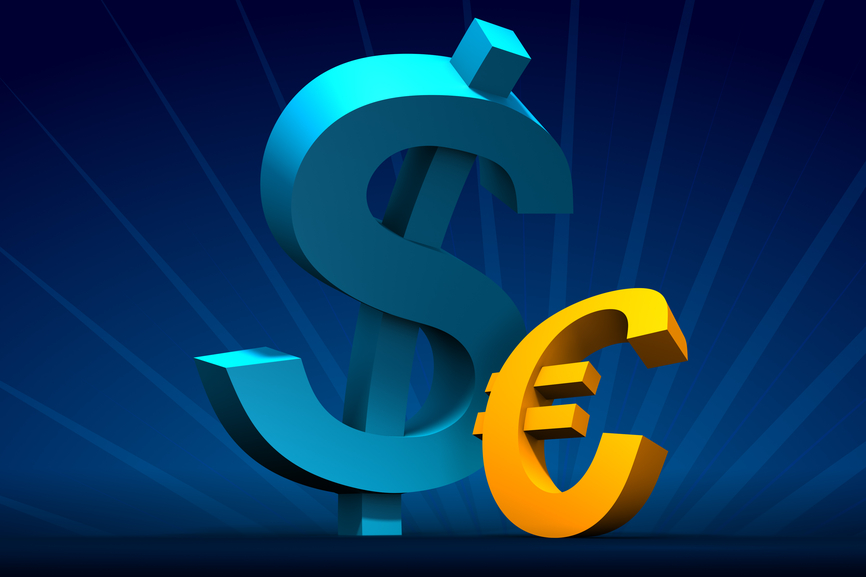 The euro hit a nine-year low against the US dollar during the first full week of January 2015, trading briefly below $1.176 before recovering moderately. The current weakness in the euro marks nearly 12 months of perpetual decline. Since March 2014, the currency has lost 15 percent of its value against the dollar, with many predicting that this downward spiral will continue through much of 2015. Underpinning the weakness of the euro—and the strength of the US dollar—are two increasingly contrasting economic environments.

Economic Stagnation in the Eurozone

Recent euro losses can principally be attributed to the contractionary economic performance of the Eurozone (the group of 19 European Union member nations that use the euro as their single currency), which has made buying euros a less attractive proposition for investors. The most significant announcement in 2015 thus far has been that the Eurozone is officially in a state of deflation, with prices having declined by 0.2 percent year-on-year in December, its lowest rate since September 2009. Much of this decline has been attributed to falling oil prices, although after excluding oil’s contribution from the figures, the core price level still threatens to enter negative territory, displaying a mere 0.6-percent increase.

The Eurozone’s biggest economy, Germany, announced in early January that its inflation rate had hit a five-year low in December of 0.2 percent, and it has only managed to escape a technical recession after posting a negligible 0.1-percent GDP growth rate for the third quarter. France and Spain, the second and fourth biggest Eurozone economies respectively, are already in a period of deflation.

Many analysts are predicting that the European Central Bank (ECB) has no choice but to implement a quantitative-easing program in 2015. The ECB’s president, Mario Draghi, hinted at the start of the year that a bond-buying program might have to be introduced in order to stimulate growth and spending in the Eurozone economies. Recently details surfaced of a study conducted by the ECB outlining various options for such a program, including a potential package of up to €500 billion of investment-grade bond purchases. An ECB vote on whether to introduce quantitative easing has been tabled for January 22, 2015.

The loose monetary policy that is expected to persist this year has weighed heavily on the euro. Since September, the ECB has kept its benchmark interest rate at 0.05 percent in a bid to lift inflation into line with its target level of “close to 2 percent” and establish price stability. So far, this measure does not seem to have worked. Moreover, the comparably low interest rates have discouraged investors from injecting funds into the Eurozone on the basis of higher rates of return being achievable elsewhere. This falling level of demand for the euro has further contributed to its depreciation.

The euro has also been dampened by concerns that Greece may leave the single currency. Greece’s prime minister, Antonis Samaras, has called for an election on January 25, with the opposition party, Syriza, currently ahead in the electoral polls. Syriza wants to implement large cuts to Greece’s creditors, mainly Germany, on the sizeable amount of debt it owes as a result of its economic bailout in 2012.

Unlike in 2012, however, Germany appears to be more resilient to pressures to keep Greece in the Eurozone. Should its creditors decline the offer proposed by Syriza, it may force the ECB to terminate Greece’s membership in the monetary union. Were this to happen and Greece reverted to its own currency, it is suggested that the ECB might curtail funding to Greek banks, which would make it unlikely that Greece would be able to pay off its euro debts. This would be expensive for Greece’s creditors, who would be forced to write down their debt claims.

Growth in the US

On the other side of the Atlantic, however, the picture is rather different. On the same day that the euro hit a nine-year low, the US Dollar Index, which measures the performance of the US currency against a weighted basket of six major currencies, reached a 12-year high.

The strength of the dollar has arisen on the back of robust economic growth in the US since April 2014. Third-quarter GDP grew by 5 percent, its fastest quarterly rise in 11 years, and by 2.7 percent from the third quarter of 2013. The unemployment rate fell in December from 5.8 to 5.6 percent, while nonfarm payroll employment increased in the same month by 252,000, ending a strong year for job creation.

Importantly, this recent economic prosperity has been achieved without adding to inflationary pressure. Inflation was kept under the Federal Reserve’s target of 2 percent for much of the second half of last year. Despite this, the Fed indicated in a recent Open Market Committee meeting that an interest-rate increase is likely to be in the cards during the middle of 2015, as long as inflation begins to show signs of convergence towards the 2-percent target.

The expected interest-rate hike later in the year would mark the first increase in the Fed funds rate since June 2006. It also follows the end of the Fed’s quantitative-easing program, which came to a close in late October 2014. Market expectations of continued tightening in monetary policy have helped the dollar rally in recent weeks, as investor funds into the US are expected to grow in order to take advantage of the relatively high interest-rate environment, thus increasing the demand for the greenback.

Financial markets are increasing their bets on further weakness in the euro; recent US Commodity Futures Trading Commission data shows that currency futures traders during the week ended January 6 increased their net short positions in the euro from the previous week by €1.1 billion. This indicates that the market believes with greater confidence that the euro will fall, as more speculators are willing to lock in today’s higher perceived euro price and sell euros at this price in the future, when prices are expected to be lower than today. Conversely, traders of dollar futures increased their net long positions by $2.5 billion during the same week, implying that the market believes the dollar will only become more expensive to purchase in the future, and so traders have locked in a relatively lower price today.

The expected further divergence in monetary policy between the US and the Eurozone is a major reason why the euro is expected to continue falling against the dollar in 2015. Goldman Sachs has predicted that the two currencies will trade at parity by the end of 2016, and that the euro will slide further to $0.90 by the end of 2017. With quantitative easing looking set to dominate the Eurozone monetary environment this year, and the IMF (International Monetary Fund) forecasting US economic growth of 3.1 percent for 2015, there appears to be little evidence that supports the euro’s recovery in the coming 12 months.