Top Posts
Challenges Remain, But There Are Opportunities to Be Had in...
Interview with Mr. Olukayode Pitan, Chief Executive Officer and Managing...
Commodities Outlook for 2023
The Value of Cash in a Time of Crisis: How...
The US-Africa Leaders Summit: Fostering a Closer Relationship with the...
Three Key Sectors in Which to Invest in 2023
Home Finance For Better or for Worse: The Linkage Between the US Economy and the Major Economies of the Western Hemisphere
Finance

For Better or for Worse: The Linkage Between the US Economy and the Major Economies of the Western Hemisphere 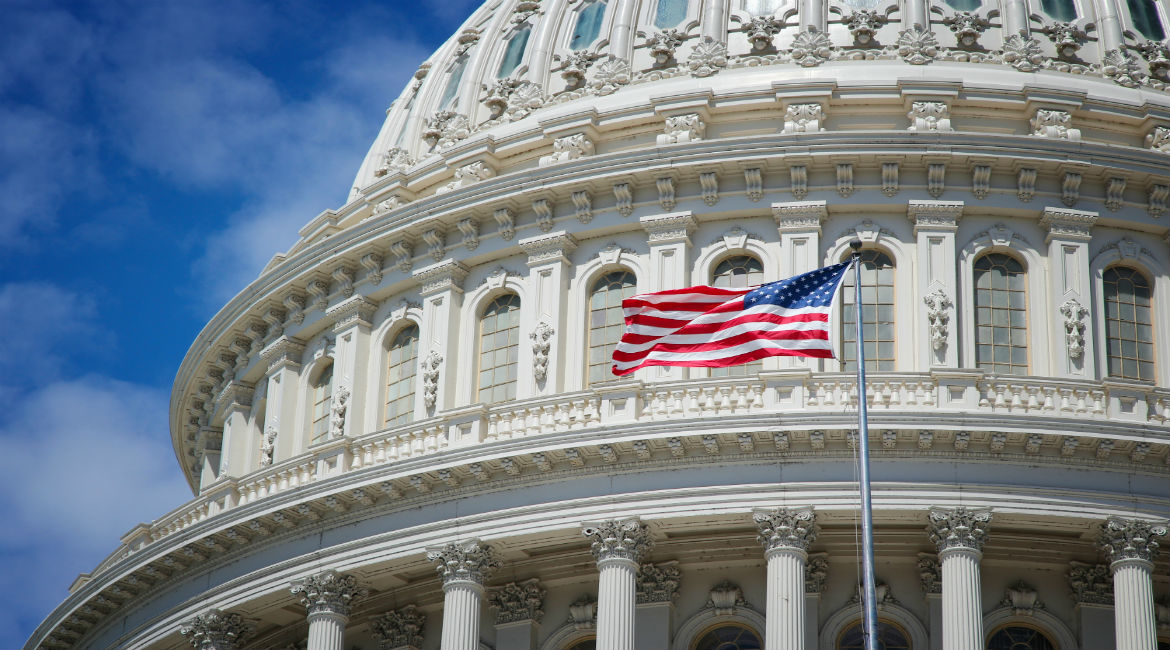 By Robert A. Dye, PhD, Senior Vice President and Chief Economist, and

The US economic expansion is long in the tooth at 115 months as of January 2019. The longest-ever US expansion was 120 months over the decade of the 1990s. As the US business cycle ages, the odds of the next recession occurring within a two-year window increase. We currently place the odds of the next US recession occurring within 24 months of January 2019 at about 50 percent and moving higher. With increasing odds of a US recession come increasing odds of recession for other Western Hemisphere economies that have both direct and indirect trading relationships with the United States.

Government policy may play a key role in the next US recession. Trade policy with China may become even more restrictive in 2019, to the detriment of both countries’ near-term outlooks. The partial federal government shutdown was also a matter of policy. It marginally reduced first-quarter gross domestic product (GDP) at a time when other headwinds were building.

Fiscal policy may quickly pivot from expansive in 2018, due to tax reform, to restrictive in late 2019, if federal spending dips heading into fiscal year 2020. Monetary policy runs the usual risk of over-tightening in 2019 as the federal funds rate nears its peak for the cycle, while the Federal Reserve’s balance sheet shrinks.

Outside of the United States, economic conditions are changing at the start of 2019. China is clearly cooling down. Year-over-year real-GDP growth fell to 6.4 percent in the fourth quarter of 2018, the lowest since the Great Recession. Fortunately, China has maneuvering room to increase fiscal stimulus. We expect to see another substantial tax cut in 2019 and possibly an increase in local government borrowing in support of infrastructure projects designed to offset the drag on the export sector. Europe is also cooling, independent of the uncertainty generated by a very clumsy Brexit. Italy’s troubled banks are vulnerable to a cooler European economy and disruption from a hard Brexit.

The US corporate sector is vulnerable. Corporate profits have been strong, but a tight labor market is pushing up wages, and higher wages will eat into profits. At the same time, both interest rates and trade tariffs have increased. Corporate balance sheets are strong enough to tolerate some margin compression, but eventually profits will get squeezed, and investors will get anxious. At the same time, corporate debt quality continues to erode, while leverage is increasing.

The above-mentioned risk factors threaten two key parts of the US economy. The housing sector has been particularly subdued in this expansion cycle. Often thought of as an accelerator for the US economy, residential investment was a brake on the US economy through the second half of 2018. Home sales have proven to be very sensitive to even relatively small increases in mortgage rates. Housing affordability remains a key issue for many first-time homebuyers, particularly those saddled with heavy student-debt loads.

Business investment has also been subdued in this expansion cycle. It is fair to say that the current economic expansion was largely fueled by the reabsorption of labor rather than investment in productivity-enhancing processes. Now, as the availability of quality labor shrinks, businesses will need to invest in new technologies in order to expand output. In the first half of 2018, business fixed investment responded positively to corporate tax reform. However, in the third quarter of 2018, growth in business fixed investment fell noticeably, down to a 2.5-percent annual rate. It will be very telling to see if business investment picks up again in early 2019 or if it tails offs.

The increasing vulnerability of the US economy to recession has serious implications for all of the Americas. This was evident during the Great Recession of 2007-09, when all major Western Hemisphere economies went into recession. The linkages were not only through direct trade but also through capital markets, which dried up globally.

Key measures of correlation between the United States and other Western Hemisphere economies can fluctuate over time. So, it is important to ask, “Is the relationship between economic growth in the US and economic growth in the Western Hemisphere during the current expansion fundamentally different from that observed during the last expansion?” To answer this question, we have analyzed the relationship between economic growth in the US and the six largest economies of the Western Hemisphere (Brazil, Canada, Mexico, Argentina, Colombia and Chile) by exploring co-movements among their real-GDP growth rates. We used the Organisation for Economic Co-operation and Development’s (OECD’s) reported quarterly figures for seasonally adjusted real gross domestic product.

Figure 1 below shows the annualized changes in quarterly real GDP for the US and a simple average of the six largest economies. The graph also includes an interpolation of the OECD’s annual real-GDP growth forecasts from November 2018.

Figure 1. Economic Growth in the US and the Six Largest Economies in the Americas 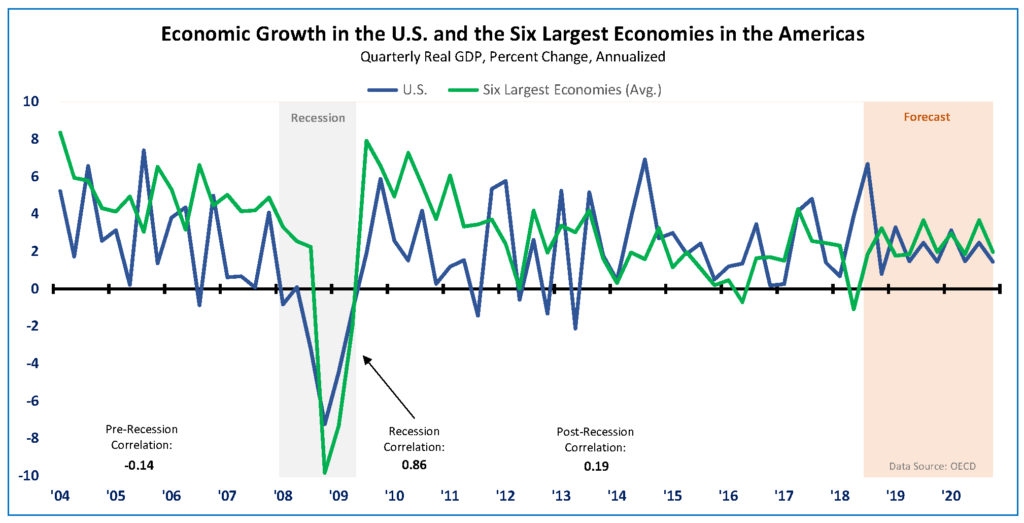 We see that GDP growth rates between the US and the six largest economies were not highly correlated in the Pre-Recession Period from 2004Q1 to 2007Q4. During the Great Recession, correlation increased. Unfortunately, the strong correlation pulled the other economies into the US-led recession. During the Post-Recession Period, beginning in 2009Q3, correlations were generally stronger than they were before the recession.

Figure 2 shows the correlation coefficient between quarterly changes in US real GDP and a simple average of the same measure for the six largest economies in the Western Hemisphere on a 3-year (12-quarter) rolling basis.

Figure 2. Co-movement Between the US and the Six Largest Economies in the Americas, Averages 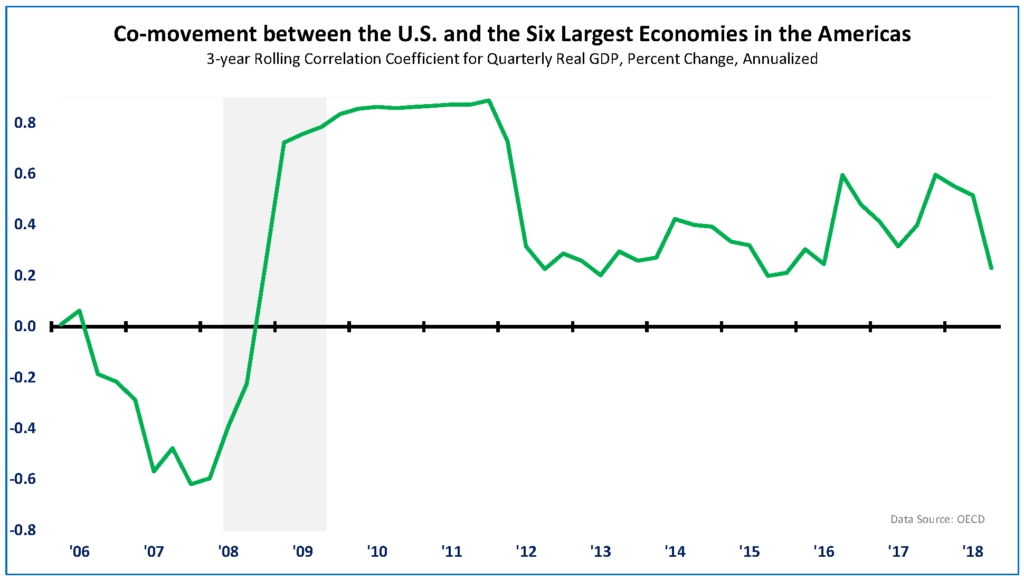 Figure 3. Co-movement Between the US and the Six Largest Economies in the Americas 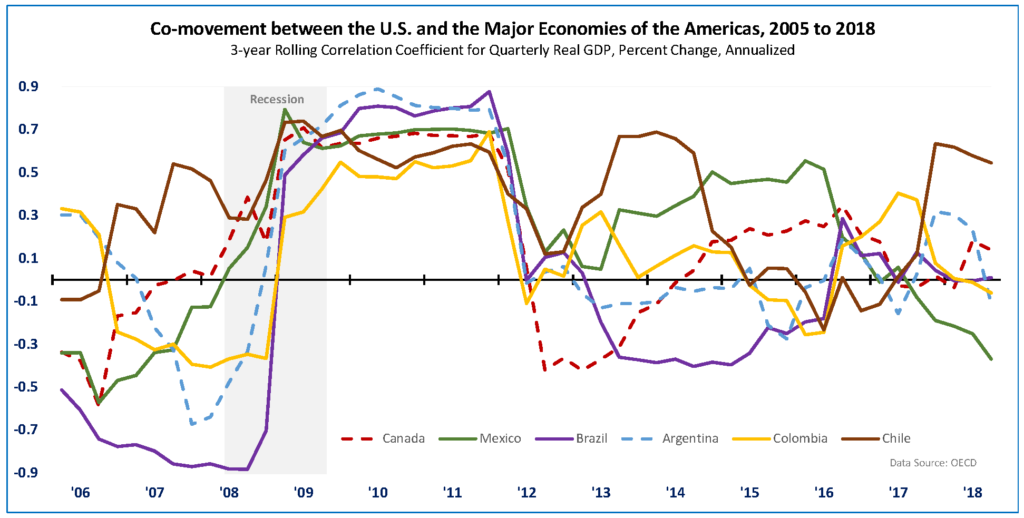 In Figure 3, the overall pattern holds, but we can see that individual countries behaved differently. During the Pre-Recession Period, most countries were negatively correlated with US GDP growth. However, Chile was an exception to the rule, showing moderate positive correlation with US GDP growth. Countries were tightly grouped during the Great Recession, much to their detriment. In the early Post-Recession Period, Canada and Brazil stood with moderate negative correlations to the US later in the Post-Recession Period. Most countries were positively correlated with the US, with the exception of Mexico. Economic structure, internal policy, foreign exchange and US policy all played a role in shaping each country’s individual co-movement graph.

Early in 2019, it looks as if downside risk factors are piling up for the US economy. Our data analysis suggests that other Western Hemisphere economies are vulnerable if the US economy slips into recession over the next year or two. That much is common sense. What may be less understood is that economic growth in Western Hemisphere economies is generally more correlated with US economic growth now than it was prior to the Great Recession. This suggests that the global dynamics of the next recession will be different. We may be in for a counter-intuitive situation in which a shallower US recession could cause more economic stress than expected in other countries.

Ransomware: Why a Simple Backup Strategy is Not Enough