Top Posts
Four Notable Partnerships Between the Fintech and Financial-Services Sectors in...
What Would Scottish Independence Mean for Banking?
Addressing the Gender Inequalities in Financial Services
Economic Warfare: A Preferable Alternative to Military Conflict?
When Data and Technology Combine in the Fight Against Fraud...
The Challenges of Global COVID-19 Vaccination
Home Finance From Known Unknowns to Black Swans: How to Manage Risk in Latin America and the Caribbean
Finance

Deteriorating macro-economic conditions across emerging markets, political and institutional instability around the world, and the growing frequency and impact of natural disasters has put the term “risk” back in everyone’s mind. In this risky new world, effective and efficient risk-management strategies could have a significant impact in the medium- and long-run growth paths of many developing nations. Unfortunately, emerging economies face a very diverse spectrum of risks, rendering a comprehensive risk-management strategy a complex task. Moreover, while one could tailor risk-management strategies to each type of risk, not having the benefit of a unifying framework can lead to the mismanagement of the scarce resources available to poor nations to deal with these potentially disastrous events.

A policy framework relevant for risk management should link the stochastic probability distribution of each type of event to the potential costs and the range of insurance instruments available to protect against it. The main take from such a framework is that risks characterized by large amounts of uncertainty or, using the statistical lingo, distributions with “fat tails” (i.e., high probability of extreme events) will be more difficult and costly to insure. Moreover, given their unpredictable nature, some risks will be uninsurable.

Figure 1 provides a visual representation of the different types of risk. In the first node, we can distinguish between risks with known probability distributions (known unknowns) from those with an unknown distribution (unknown unknowns). This basic distinction allows us to reach an important policy conclusion: while insurance tends to be the most efficient tool in the risk-management arsenal, we cannot insure against all risks. Large and completely unpredictable events, also known as “Black Swans” in the risk literature, provide no opportunity to create an ex-ante insurance contract. In contrast, risks with known stochastic distributions will, for the most part, offer the opportunity to access at least some kind of partial insurance. Among these types of risks, we distinguish between those with well-behaved bell-curve distributions, Type I, and those with distributions characterized by fatter tails, Type II. 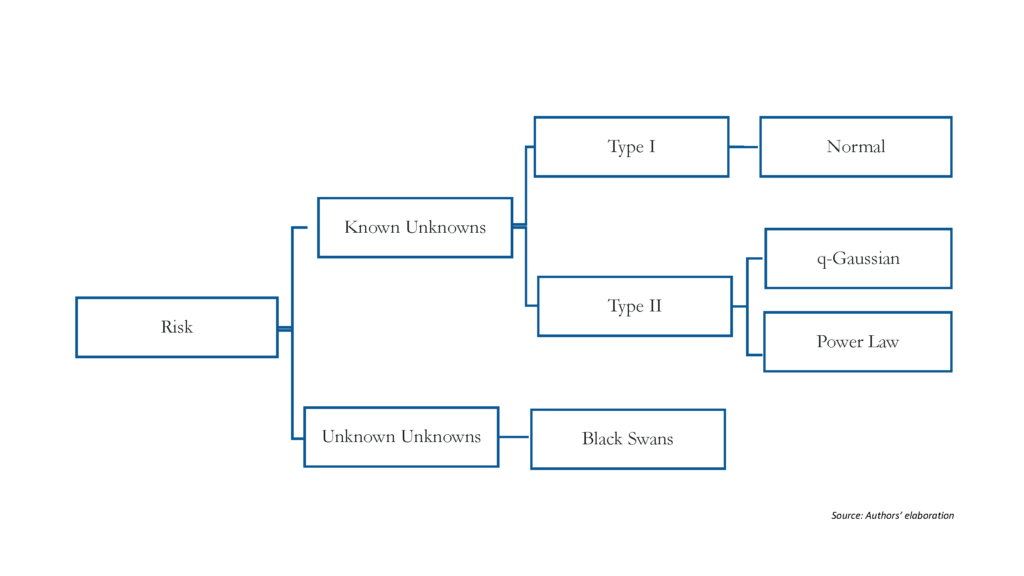 Risks that follow a normal distribution should be fully insurable since their thin tails make it very improbable that any event deviates substantially from the ex-ante known mean. Unfortunately, as often and rightly pointed out by Nassim Nicholas Taleb and others, there are very few economically relevant risks that follow normal distributions. One of such few examples could be a measure of rainfall in a commodity-exporter and oil-importer country such as Uruguay (Figure 2, Panel A). Since flood or drought years may represent a major problem for Uruguay’s agricultural exports and for its energy production, policymakers may want to insure against these events through financial derivatives in international markets. In fact, with the help of the World Bank, Uruguay has already purchased financial options related to the country’s rainfall. 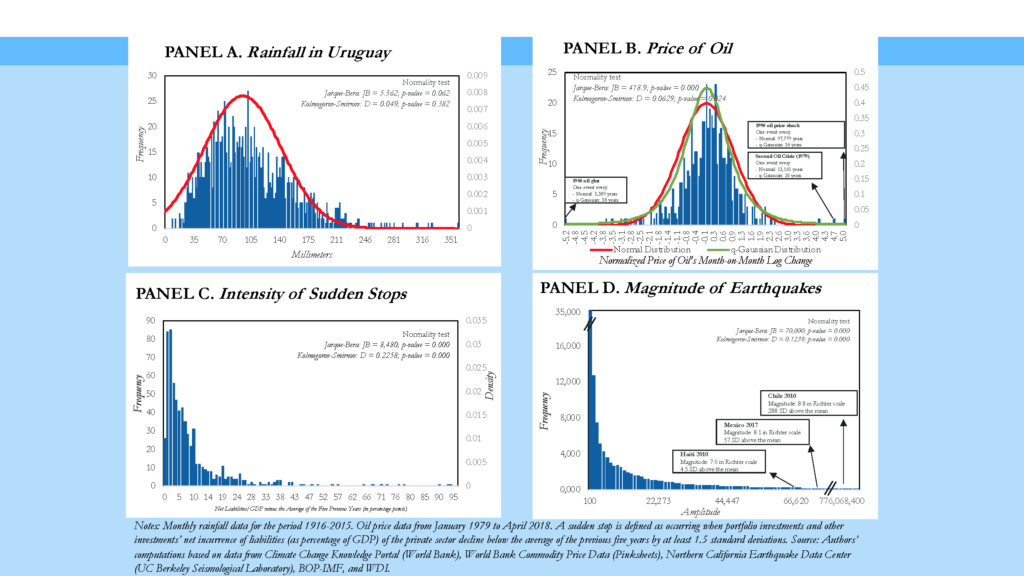 Most economically relevant risks are Type II, which are characterized by distributions with fatter tails where extreme events are not that rare. While these risks display an almost continuous degree of fat tails, the diagram in Figure 1 focuses on just two extreme cases for the sake of exposition (q-Gaussian and power law distributions). On the one hand, risks associated with changes in international asset prices and commodities tend to follow bell-shaped distributions (q-Gaussian). When observing the distribution of the changes in oil prices (Figure 2, Panel B), one may think that these changes follow a normal distribution. However, this could be a costly mistake. The key difference between the underlying distribution of oil prices and a normal distribution lies in the fatness of the tails. In fact, assuming a normal distribution, oil traders in 1971 would have believed that an event of the size of the ensuing oil crisis was literally impossible. If those traders had assumed a distribution with fatter tails, such as a q-Gaussian, they would have realized that, while rare, such events were entirely inside the realm of possibility and thus would have looked to protect themselves accordingly. Although fatter tails increase the risk of extreme events (and hence risk for insurers), these risks are still small enough and will be reflected in insurance premiums.

On the other hand, some relevant financial, economic and natural risks display tails so fat that a single extreme event (which can occur with a non-negligible probability) can dominate the priors used by insurers in their risk assessments. Sudden stops of capital inflows (Figure 2, Panel C) or natural disasters such as earthquakes (Figure 2, Panel D) represent two examples of such power law distributions. Insuring against this type of risk is much more problematic. To illustrate the insurers’ dilemma, let us imagine drafting an insurance contract against an earthquake in Los Angeles (LA). If the insurer takes the sample mean and standard deviation from the historical series of earthquakes suffered by the region surrounding LA in the last 200 years, he or she may expect a typical event to have an intensity magnitude around three on the Richter scale. This information will be then used to calculate the premiums on the contract. However, the United States Geological Survey experts estimate a 93-percent probability of an earthquake with magnitude between seven and eight on the Richter scale hitting California before the year 2045. An earthquake of magnitude eight on the Richter scale would be an event 100,000 times more powerful than a typical earthquake of magnitude three on the same scale. This event by itself would be powerful enough to substantially change the ex-post mean and standard deviation rendering the ex-ante premiums wildly unsuitable to cover the costs of the earthquake and leaving many insurers bankrupted. Typical insurers would thus tend to stay away from these markets.

While precautionary saving in the form of international reserves seems to be the only ex-ante solution to the problem of sudden stops in capital flows (no insurance is available at this point), a quickly evolving insurance technology has started to provide solutions to natural disasters such as earthquakes in the form of catastrophe bonds (cat bonds). Though partial at best, cat bonds provide a new form of insurance against these natural phenomena. If the bond is triggered (i.e., if the natural disaster takes place), the principal obligation to investors is automatically cancelled and immediately used for relief efforts. One of the most successful and larger examples of a cat bond was recently sponsored by the World Bank and covered the four countries of the Pacific Alliance (Chile, Colombia, Mexico and Peru). The multi-country structure of the cat bond lowers the cost of insurance as the correlations among events in different countries tend to be low.

In sum, insurance should be a critical component of the countries’ arsenals to manage their most significant risks. The access and cost of insuring against any specific type of risk will be determined by its underlying stochastic distribution. As the tails of the distribution grow, it becomes more difficult and costly to obtain insurance, and other instruments in the risk-management toolbox become more important. While new technology such as multi-country cat bonds is enabling countries to partially insure against fat-tail events, countries cannot insure against all risks at this point. In fact, this will always be true in the case of Black Swans. Building resilience and improving access to ex-post aid are the only preventive tools available for such totally unpredictable events.

Is It Worth Investing in Frontier Markets?

Why Banks Must Check Their Gen Z Blind...

Is a Wave of Bankruptcies About to Hit...

Real-Time Enables the Next Frontier of Payments

Why A Proactive Approach To Wellbeing Will Pay...

Could the US Benefit from a National Green...

When Data and Technology Combine in the Fight Against Fraud and Financial Crime By Chris Lewis, Head of Solutions,… https://t.co/k5OKZvYsdU