Top Posts
Designing the Next-Generation Banking Treasury Management
Is the US Finally Warming to the Possibility of Creating...
Enabling the Drive Toward Green Finance with Technology
Why Have Tin Prices Struggled in 2022?
The Devil We Thought We Knew
How China Has Managed to Avoid the Inflation Bug
Home Finance Furthering the Green Agenda and Combating Climate Change through the Private Sector
Finance 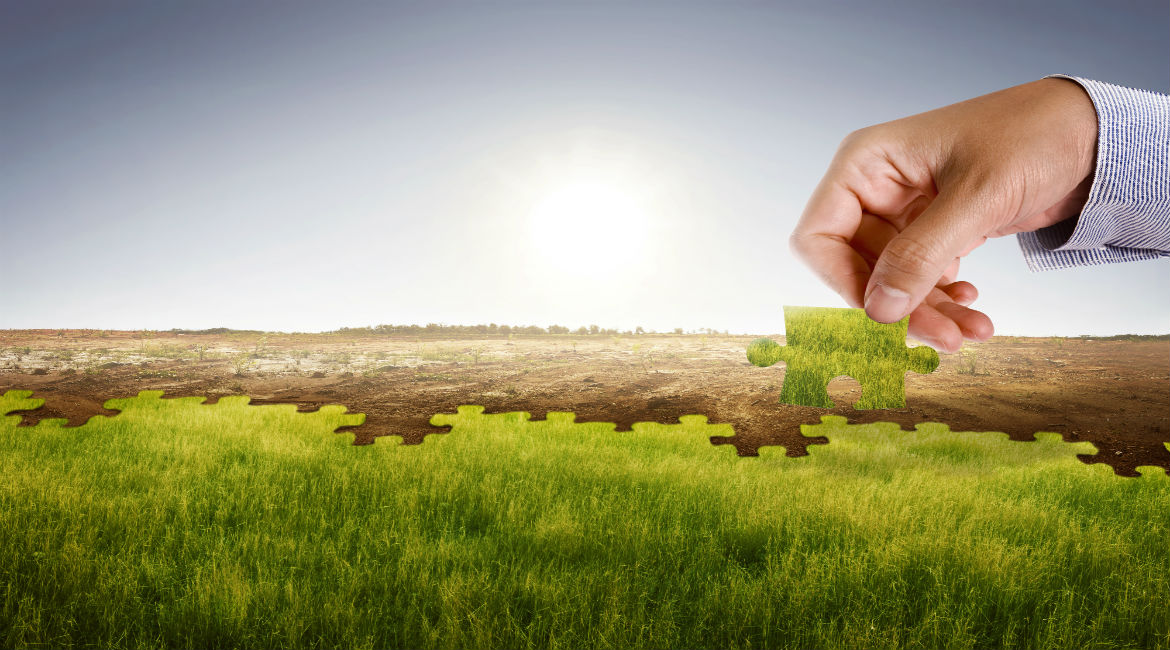 We all know that the way we currently produce goods, generate energy, move around and consume generally—in short, how we run our economy and our lives, too—is not sustainable. An economy that produces unparalleled wealth must be adapted to protect the very foundations of that wealth.

In the early 21st century, however, new ways are becoming available to make the necessary changes. This is especially visible in the realm of energy, as increasingly sophisticated—and clean—renewables come close to ending the rule of “Old King Coal” and other polluting fossil fuels.

There are three main reasons for the rapid advance of renewables. The sector has matured very quickly in terms of regulation and cost structure. While early incentive schemes may have helped to kickstart projects, they also led to overcompensation, unbalanced risk allocation and distortions of the market. At the same time, technological progress has led to dramatic cost reductions, which make renewables, in some cases, the cheapest source of energy.

In addition, reforms of the European Union Emissions Trading Scheme (EU ETS) have in the last year significantly increased the price of carbon. This has had a significant economic impact in many countries, making coal increasingly uncompetitive. This has completely changed the economic dynamic and signals how incorporating the true environmental cost into economic activities can rapidly change behaviour.

The third reason is that today, for the first time, there is a clear direction of travel, thanks to an agreement on the second EU Directive on Energy Efficiency (2018/2002). By setting a renewable energy target of 32 percent by 2030, it provides a clear picture of which way the European electricity market is going. This is obviously what investors want and need.

Combating climate change by furthering the green agenda is at the heart of what we at the European Bank for Reconstruction and Development (EBRD, or “the Bank”) do. As a leader in climate finance, our belief is that the best way to do this is within the framework of a well-functioning market economy.

It is in the EBRD’s DNA to support private-sector economies. This is an institution that was established in 1991, after the collapse of communism in Central and Eastern Europe, to foster the transition to a development model based on democracy and the market economy.

We work with private investors and offer market-based solutions and tools to achieve our goals—a model that works. The EBRD is highly profitable, giving us the means to do more. This year, for the first time in our history, we are approaching the €10-billion benchmark of annual business investment. As remarkable as the financials are, the best testimony to our model’s success is the huge appeal it has. The EBRD started in five countries. Today, we operate in 38 economies on the three continents of Europe, Asia and Africa. In addition, we are the only international financial institution with a growing number of shareholders, having lately welcomed China and India onboard.

Dealing with the legacy of communism may also have given us a headstart when it comes to the sustainability and climate-change agenda—especially relevant as the centrally planned economy was not only hugely inefficient but also organised in a way that paid very little, if any, consideration to environmental concerns.

When the EBRD set out to launch its Sustainable Energy Initiative (SEI) in 2006, energy intensity in our region was, on average, more than three times higher than in the European Union. Reducing energy intensity was not only an economic and environmental must, but it was also an important step towards reducing dependency on energy imports.

SEI was launched with the aim of scaling up sustainable-energy investments in the Bank’s regions, improving the business environment for sustainable investments and removing key barriers to market development. Thisapproach combined investment in renewables with scaling up energy efficiency. Following the needs of our recipients, we later added work on climate resilience, resource efficiency and the circular economy.

Going one decisive step further, in 2015, we adopted the Green Economy Transition (GET) approach, putting sustainable investment at the heart of our mandate. Our goal is to raise the share of green investments as part of our total annual business to 40 percent by 2020, and we are well on track to reaching this goal. Taking into account the complexity of the sustainability challenges, we have developed a multidimensional approach to helping countries build low-carbon and climate-resilient economies.

For instance, we have developed Green Economy Financing Facilities (GEFFs) to support businesses and homeowners wishing to invest in green technologies. The programme operates through a network of more than 130 local financial institutions across 24 countries supported by almost €4 billion of EBRD finance.

GEFF illustrates three important elements in our work: that we work with and through local partner banks; going beyond financing, the programme provides detailed expert advice; and, importantly, that the programme would not exist without the vibrant support of donor countries.

Another example is EBRD Green Cities, a comprehensive programme under which we invest in cities that want to lead the transition towards a more sustainable future. The programme recognises the rapid global trend towards urbanisation and the massive impact this has on the environment from transport to recycling and from district heating to municipal water supplies. We help cities to develop a Green City Action Plan (GCAP), identifying policy changes and projects that would make them more sustainable; help them to access sustainable infrastructure financing; and assist them in gaining technical expertise.

Demand for the programme is exceeding our most optimistic expectations, with more than 30 cities already signed up and funding of more than €1 billion available to date, thanks also to strong support by the Green Climate Fund (GCF). Our goal is to reach 100 Green Cities by 2024.

EBRD Green Cities is more than an important and attractive programme. It also serves as a good example of how we combine our investments with policy dialogue as we develop action plans. This is part of why EBRD Green Cities has been endorsed by the Green Climate Fund, which supports the programme with concessional and grant co-finance.

A third example of our green work worth highlighting is in the area of climate resilience. Many countries in the EBRD regions are particularly vulnerable to the impacts of climate change, and we have taken a leading role in assessing and managing physical climate risk and investing in measures that improve resilience. We are providing financing for the complete rehabilitation of the Qairokkum Hydropower plant in Tajikistan, one of the most vulnerable countries in the world to climate change.

In late September 2019, we successfully placed the first-ever dedicated climate-resilience bond, raising US$700 million from some 40 investors in 15 countries, part of our aim to involve capital markets and shift assets towards green investments.

Our approach is to create an electrified economy with electricity generated largely from renewable sources. Today, renewables represent the majority of our energy investments, with a share of 32 percent in the €7.9 billion we invested during the period 2014-2018.

In our latest energy-sector strategy, adopted by our board in December 2018, we decided not to finance thermal-coal mining or coal-fired electricity-generation capacity, upstream oil exploration or upstream oil-development projects, except where the projects reduce greenhouse-gas emissions or flaring.

This fast-changing field is not without its debates and controversies. One is whether gas should still play a role. In the long run, it is clear that meeting global climate goals leaves little if any space for hydrocarbons. Since energy infrastructure is very long-lived, we need to have that long-run situation clearly in mind now. However, in our latest energy strategy, we identified that gas will continue to play a key role in the coming years. For those EBRD countries that are currently heavily reliant on coal, gas will be an important part of the future energy mix—alongside renewables and interconnections—in delivering energy security with much lower carbon emissions. For all countries that are moving to ever higher levels of wind and solar, gas—alongside other tools—can provide essential backup capacity for times when the wind does not blow, or the sun does not shine. However, investments in gas need careful safeguards to avoid the risk of locking in infrastructure that is not consistent with global climate goals. For us, the key tool is our use of a shadow carbon price to test all such projects against those goals. We are also increasingly focused on the potential for green gas and the hydrogen economy.

The biggest challenge faced is creating sufficient capacity. We often work hard on projects with, say, 50 megawatts (MWs) when what we need are gigawatts (GWs). The industry is increasingly scaling up to meet the demand, and so are we: our recent projects include a 158-MW wind farm in Serbia, a 220-MW wind farm in Poland and—our largest renewable investment to date—the 1.5-GW solar park Benban in Egypt. Stretching over 36 square kilometers in the desert near Aswan, the solar park is several times bigger than the largest solar power plants in Europe and North America. It represents nearly 2 percent of Egypt’s total installed electricity-generating capacity.

The potential and demand in this field are equally huge. From the pricing of bankable projects to creating an adequate network that can deal with the intermittent nature of renewables, many challenges remain. Yet the fact that it is not easy does not mean it is not manageable or desirable. And working with the private sector brings the flexibility and finesse needed to achieve success in changing the way tomorrow’s energy is provided.