Top Posts
Challenges Remain, But There Are Opportunities to Be Had in...
Interview with Mr. Olukayode Pitan, Chief Executive Officer and Managing...
Commodities Outlook for 2023
The Value of Cash in a Time of Crisis: How...
The US-Africa Leaders Summit: Fostering a Closer Relationship with the...
Three Key Sectors in Which to Invest in 2023
Home Finance How COVID-19 Is Affecting Microfinance
Finance 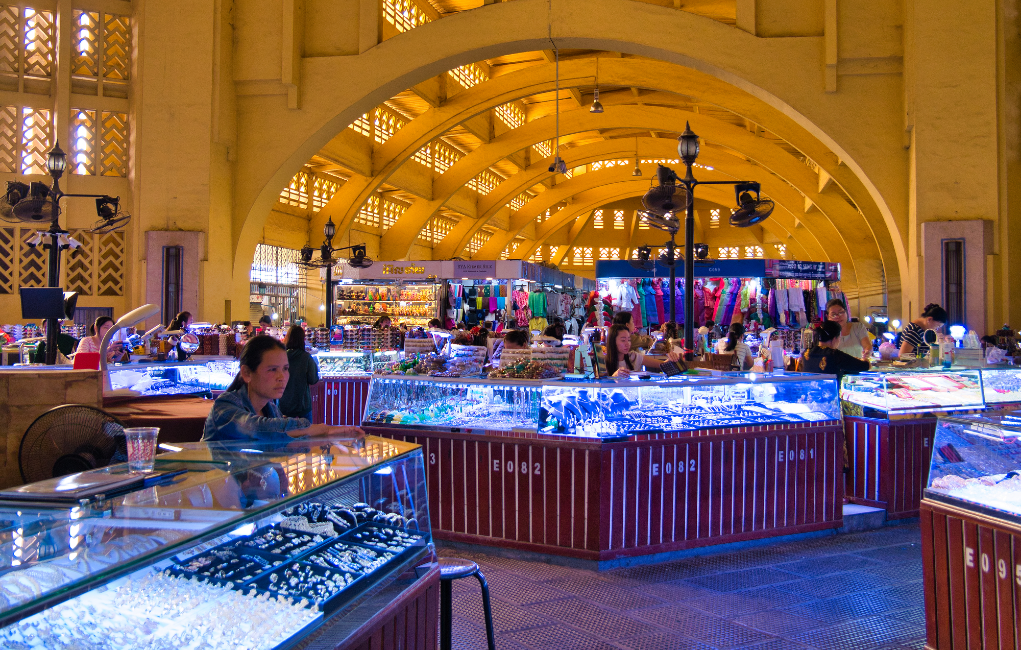 By now, it is clear that the global coronavirus pandemic and the government-mandated lockdowns that have resulted have had an unprecedented impact on the global economy. But perhaps what has not been sufficiently illuminated to date is just how critical the situation has become for those groups most at risk from this downturn. Specifically, lower-income groups in developing countries and emerging economies face not only the prospect of abject poverty in many cases but also the likelihood that their financial systems may not be sufficiently robust to help them through these dark times.

Among the most crucial components of such systems is microfinance, a sector that is typically engaged in providing small-business loans, savings accounts and non-financial support to help boost financial inclusion and entrepreneurship within lower-income communities. In the last 15 years or so, microfinance institutions (MFIs) have received considerable acclaim by reaching out to communities that have been largely ignored by the traditional financial system as well as by focusing on financially empowering women. Indeed, around 80 percent of the currently estimated 140 million global microfinance customers with an outstanding gross loan portfolio of $124 billion are women.

Today, the microfinance sector covers a broad range of financial services, each of which tends to have a different degree of popularity depending on factors such as geographical region. But several reports have emerged in recent weeks to suggest that MFIs are under increasing strain as the COVID-19 pandemic continues to curtail business opportunities for micro, small and medium enterprises (MSMEs). As such, they have been forced to adapt in order to continue supporting their clients as effectively as possible. The Consultative Group to Assist the Poor (CGAP), an independent think tank for financial inclusion involving more than 30 leading development organisations, for instance, recently found that its PAR30 measure of loans in arrears for more than 30 days recorded a hefty 41-percent increase at the outset of the crisis compared to a pre-pandemic June 2019 baseline.

This strongly implies that MFI portfolios are coming under mounting pressure from the ongoing downturn. That said, the CGAP did also attribute this deterioration to declining portfolio growth, which could mask underlying weakness. “When growth stops or reverses, PAR levels increase, and that’s one likely driver of the April/May spike,” the group acknowledged. And it would appear that, as expected, smaller MFIs struggle considerably more than their bigger peers. In this case, the CGAP found that smaller MFIs’ PAR30 levels were almost double those of larger MFIs. 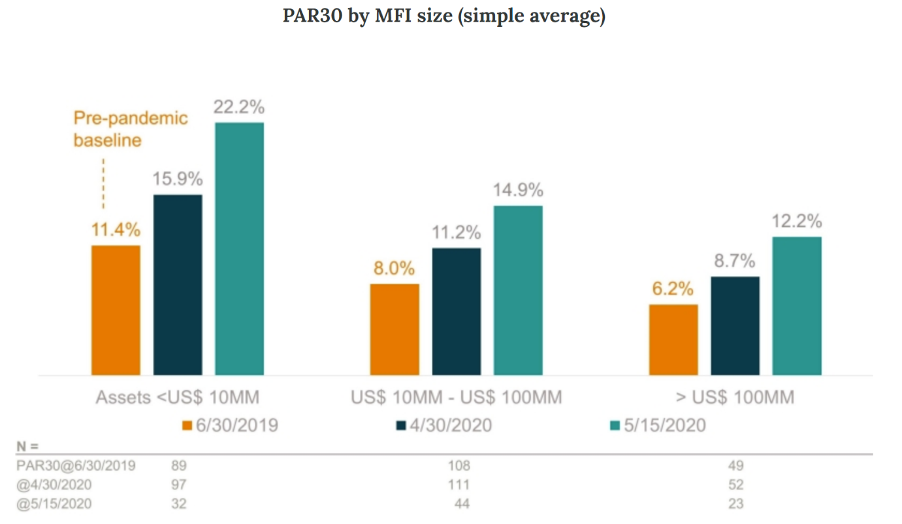 A joint survey conducted in July of 108 MFIs worldwide by renowned microfinance institutions ADA (Autonomous Development Support) and Grameen Crédit Agricole Foundation, alongside microfinance-focused investment manager Inpulse, meanwhile, found that the biggest institutions (Tier 1 in the below chart) are “better equipped to overcome the financial difficulties resulting from the health crisis and epidemic containment measures, as well as to take crisis management measures and make use of the specific measures put in place by local authorities”. But smaller MFIs (Tiers 2 and 3) are “more likely to offer their clients non-financial services to help them cope with the situation and are eager to continue developing non-financial services in the future”. Although big MFIs seem more resilient in times of crisis, moreover, smaller ones are also “rising to the challenge and staying true to their powerful social mission”, the survey observed.

Microfinance in some regions and countries also seems to be more badly affected than in others. Cambodia, for example, lays claim to holding the world’s highest average microfinance loans per capita, at $3,804. But there are very few consumer-protection measures in place for those who have been unable to repay their loans, with Prime Minister Hun Sen even telling MFIs to seize property. “Many Cambodians fear losing their land more than catching the coronavirus because they can’t pay back their loans, and the government has done little to help them,” said Phil Robertson, deputy director of the Asia division of Human Rights Watch. “The Cambodian government should immediately order a freeze on debt collection and interest accruals of those harmed by the pandemic, and hold financial institutions that fail to comply accountable.”

And in India, where the sector recorded a total loan portfolio last year of $1.785 trillion and is thus one of the world’s most thriving microfinance hotspots, recent data from the central bank shows that serious problems arose in recent months, particularly with loan collections. “Owing to the disruptions in supply chain and business operations, the likelihood of loss of livelihoods and consequent drop in household incomes is high,” the Reserve Bank of India’s September report observed. “NBFC [non-banking financial company]-MFIs, being specialised institutions extending collateral-free loans to low-income groups, are particularly exposed to credit risks in this scenario.”

So, what is being done to resolve the microfinance sector’s struggles? It would seem that different regions are offering different solutions. In Europe, for instance, the Programme for Employment and Social Innovation (EaSI) is doing much to support microfinance initiatives during the pandemic. Normally, the Programme’s mission is to boost access to microfinance for at-risk groups that want to develop business ideas, and it receives help in this regard from the European Union (EU) through the EaSI Guarantee Instrument scheme, which facilitates connections between financial intermediaries and micro-enterprises and social enterprises; the EaSI Capacity Building Instrument, which helps facilitate the growth of financial intermediaries to better serve its enterprises; and the EaSI Funded Instrument, which provides loans to help financial intermediaries expand their lending capacity.

Under the €400-million Guarantee Instrument, it was announced in July that the European Investment Fund (EIF) and the European Commission (EC) would launch new COVID-19 support measures to enhance access to finance for micro-borrowers, micro-enterprises and social enterprises affected by the socio-economic consequences of the pandemic. “The objective of the new COVID-19 measures is to further incentivise financial intermediaries to lend money to small businesses, mitigating the sudden increase in perceived risk triggered by the coronavirus pandemic, and alleviating working capital and liquidity constraints of final beneficiaries targeted by the EaSI programme,” the Commission stated. “Key features of these new measures include higher risk coverage, broadening of certain parameters, such as an increase of the maximum exposure for micro and social enterprises, and more flexible terms.”

The CGAP, meanwhile, observed four key ways in which MFIs have been responding to the conditions imposed by COVID-19:

Indeed, with the pandemic seemingly ushering the world into greater use of digital channels, it would seem reasonable to assume that the microfinance sector will follow in the same mould to continue serving customers. Ajay Kanwal, managing director and chief executive officer of India’s Jana Small Finance Bank, for example, believes digitalisation will become the norm for the industry in a post-COVID-19 world. “The most positive feature of the whole crisis is that we will move towards more digital approaches towards customers, banks and finance companies, which in a way will help a bit more of a formalisation and hence ability to give more credit to the underserved will become easy.”

Should lockdown measures be relaxed further going forward, however, some of the operational challenges facing MFIs are likely to ease in the face of improving mobility, more opportunities to interact with clients and greater capacity to disburse loans and collect repayments.

Haute Homes in the Caribbean