Top Posts
Are Your Bank’s Digital Marketing Metrics Meaningful?
Identifying Beneficial Ownership: A Regulatory Conundrum
Forging a Digital Framework to Harmonize the Global OTC Derivatives...
The Paradox of AI and Investing
Malaysia’s Fight Against Climate Change: Perspectives from a Central Banker
Crypto-assets and the Relevance of International Private Law
Home Finance The Impact of the Historical Influence of Portugal in Angola
Finance

The Impact of the Historical Influence of Portugal in Angola 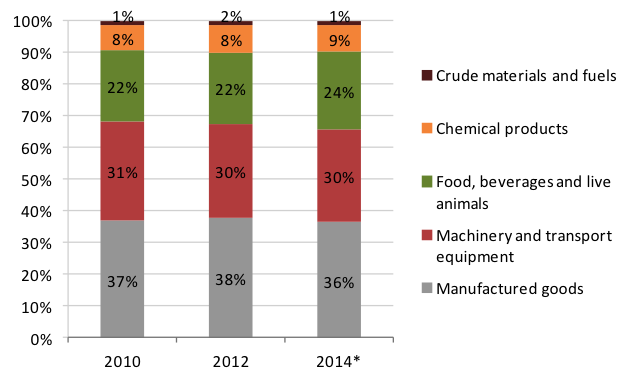 Angola is a former colony of Portugal, independent since November 1975 after a long 14-year war between Angola and the metropolis. Following their proclamation of independence, Angola sank into a civil war between the three main Angolan parties that lasted until 2002. This long war led to thousands of casualties and significant destruction of the country’s infrastructures (roads, bridges, railways). After the end of the civil war, the country entered into an era of growth and rebuilding, which turned Angola into one of the main oil producers and an important regional power.

Angola is a country rich in natural resources, notably oil, which accounts for almost 45 percent of its GDP, 60 percent of its fiscal revenues and more than 90 percent of its exports. From 2004 to 2008, the GDP growth rate of Angola was on average 17 percent, turning Angola into one of the fast-growing economies in the world. This tremendous growth was mainly supported by the oil sector, which absorbed the vast majority of the foreign and domestic investment in Angola.

The financial crisis and the contraction in oil production led to a significant economic deceleration in the period from 2009 to 2011, with an average GDP growth rate of just 2.4 percent. In 2012, the recovery of the oil and non-oil sectors led to a more robust growth of around five percent. For 2013, the IMF (International Monetary Fund) estimated a growth rate of approximately 6.8 percent, mainly supported by the non-oil sector performance. And for 2014, the estimations point to a new slump in activity, with growth of less than four percent.

The most recent data does not incorporate the sharp fall in oil prices since the end of 2014, but anecdotal evidence suggests that the impact on the Angolan economic performance will be significant. Recent news reports a scarcity of US dollars in the economy, and the authorities have already imposed some restrictions on imports. Additionally, fiscal revenues are expected to fall, the fiscal deficit is expected to rise, and the external positive balance will surely shrink and might even turn negative.

This volatility in the Angolan GDP growth reflects its extreme dependence on the oil sector and suggests that for the growth to become more sustainable, a strong economic diversification is crucial. Indeed the share of the oil sector in GDP has been decreasing in the last years, from around 49 percent in 2011 to 42 percent in 2013, and expectations are that the non-oil sector will outperform the oil sector in the upcoming years—especially agriculture, services and banking. Besides the economic diversification, a massive investment will have to continue to be devoted to the rebuilding of infrastructures all over the country as a way to promote a faster and, essentially, a more equal growth for all Angolan regions.

One of the main indicators of the influence of Portugal in Angola is the position of Portugal as the first origin country for Angolan imports. Portugal has ranked first since 2003 (the first year of the series from the National Bank of Angola), always with a significant lead over the other main origin countries, as can be seen in Figures 1a and 1b and in Table 1. Portugal’s position has continuously strengthened during the past years, with its share rising from 12 percent in 2007 to 16 percent in 2013. This evolution resulted from the fact that the growth rate of imports from Portugal was always greater than the growth rate of total imports, for the period under analysis. It also should be mentioned that this increase occurred amid a strong growth in total Angolan imports, the nominal amount of which doubled between 2007 and 2013.

The increase in Angolan imports from Portugal was not even larger due to the significant investments of some Portuguese companies to produce domestically instead of exporting from Portugal. As Portuguese companies increased their sales in Angola, it became more rational and cost-effective to build production plants in Angola, not only due to the logistic costs but also to avoid the significant trade barriers and tariffs levied by the Angolan authorities on imports. This trend was clear in more recent years, despite some restrictions imposed by the Angolan authorities regarding investment by foreign investors (e.g., a compulsory minimum investment of USD 1 million in order to have access to public support programmes and to be able to repatriate dividends). Moreover, this process is essential to support the diversification of the Angolan economy, which is still heavily dependent on the performance of the oil sector.

Figures 1a and 1b. The importance of Portugal in Angolan imports 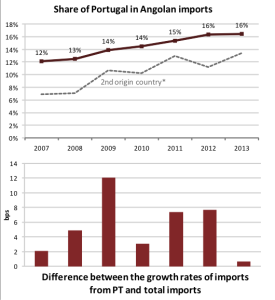 Furthermore, as it can be seen in Table 2 below, the Portuguese exports to Angola are not concentrated in a small number of large companies but instead in a significant number of SMEs from different economic sectors, which confirms the widespread influence of the Portuguese companies in the Angolan economy.

Additionally, as can be seen in Figure 2, around one-third of the imports of Angola from Portugal are machinery and transport equipment, which are pivotal in the rebuilding process that has been underway since the end of the civil war and also in the economic diversification of Angola. As mentioned above, the rebuilding of infrastructures in Angola is vital to the future growth of the economy and to support a more equal development of the whole country.

Figure 2. Breakdown of Angolan imports from Portugal by sector (SITC) 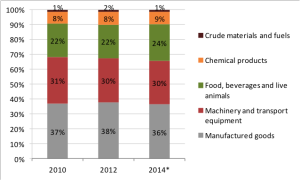 Source: Eurostat. Note: For 2014, data comprises only the months from January to November.

According to a recent study from Ernst & Young, Angola was the fourth-largest recipient of foreign-direct-investment (FDI) projects in sub-Saharan Africa during the period from 2007 to 2013. The same study shows that Portugal was the country that developed the most investment projects in Angola, followed by the larger economies of the USA, the UK, Spain and South Africa.

The Portuguese investments in Angola are well diversified, but the most important sectors are construction, real estate, tourism and banking. Recent data indicates that more than 2,000 Angolan companies have Portuguese capital. For instance, most of the larger banking groups in Angola have significant participations from Portuguese stockholders, mainly Portuguese banks. Additionally, the infrastructure-rebuilding process is being mostly done by Portuguese construction companies.

Finally, it is important to highlight that part of the Portuguese investments are coupled with a transfer of know-how and also human resources, which, in some cases, can be helpful to build domestic-based knowledge capable of supporting the future economic growth of Angola.

A new equilibrium seems to have emerged in recent years, with a growing influence of Angola in Portugal. This influence is mostly economic, but some political influence cannot be disregarded.

In the economic sphere, Angola became, as we saw above, one of the main trading partners of Portugal. The harsh economic downturn in Portugal and in most of its European partners, notably Spain, was only the final push for Portuguese companies to explore other markets outside the European Union. Within this general trend, the historical bonds and the fast Angolan growth spurred the Portuguese exports to Angola, which emerged as the primary market for Portuguese companies outside Europe. 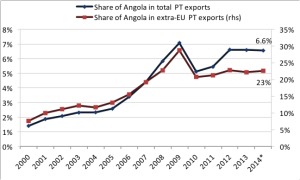 Source: Eurostat. Note: For 2014, data comprises only the months from January to November.

Another side of the increasing influence of Angola in Portugal are the growing Angolan investments in Portugal. Data from the United Nations Conference on Trade and Development (UNCTAD) shows that in 2013, Angola was the only African country with more investments made abroad than those received from abroad. These numbers are largely driven by the net inflows of FDI, which are mostly related to the oil sector and therefore relatively volatile, although it is still an important figure that highlights the increasing importance of Angola as a net investor.

From all the facts and figures presented in this article, the growing interdependence between Portugal and Angola in economic and political terms is undoubtable.

As far as the economy is concerned, the importance of Angola to Portuguese exports and companies is clear. On the other hand, the importance of the imports from Portugal to sustain the fast economic growth and development experienced by Angola in the last few years is also apparent. On the other side, the investments of Angola in Portugal are a way to affirm the country as a regional economic power and also to spread its influence in the world, through a market that is very familiar to Angolan authorities.

In the future, a more balanced trade relationship is expected between Portugal and Angola. As Angola diversifies its economic activity, also supported by the investment of Portuguese companies, it is expected that imports from Portugal may decrease or at least grow at a slower pace. However, these expectations are largely dependent on the capability of Angola to diversify its economy and, thus, rely less on the oil sector, which given its inherent volatility might compromise a sustained path of growth and development.