Top Posts
Why Data Sharing and Technology Are Key to Tackling Illicit...
KBC Group: Behind the Success of Europe’s Top Bank-Insurer
Designing the Next-Generation Banking Treasury Management
Is the US Finally Warming to the Possibility of Creating...
Enabling the Drive Toward Green Finance with Technology
Why Have Tin Prices Struggled in 2022?
Home Finance Is Russia Over the Worst of Its Economic Woes?
Finance

Is Russia Over the Worst of Its Economic Woes? 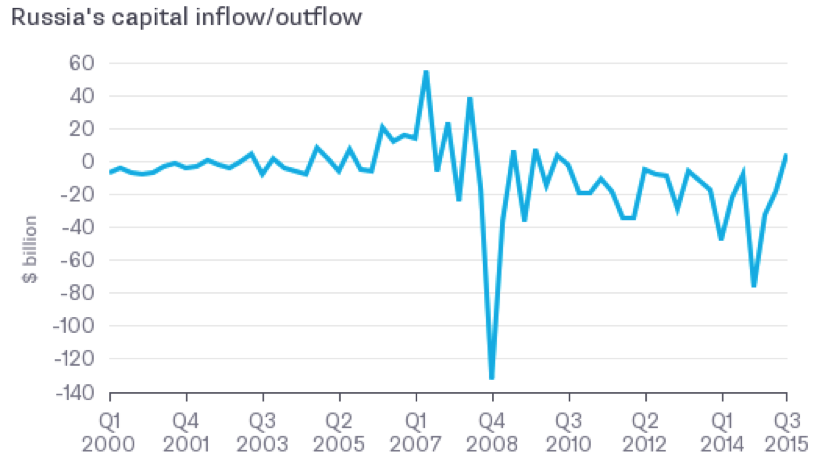 The third quarter of 2015 saw Russia receive some rare positive news regarding its beleaguered economy—for the first time in five years, the country experienced a net capital inflow.

Despite not being a particularly significant barometer of economic wellbeing, this statistic was enough for President Vladimir Putin to announce that “on the whole, the peak of the crisis has been reached”, thus implying that the only way is up from now onward. Despite the $5.3 billion inflow during the quarter, data from Russia’s central bank puts the amount that has exited the economy since 2010 at $400 billion, underlining the relative insignificance of the recent good news.

Due to a lethal combination of falling oil prices, a collapsing ruble and Western-imposed sanctions over the military conflict with Ukraine (which has crippled banks’ borrowing and lending abilities by cutting them off from dollar funding), Russia’s economy was sent crashing into a deep recession in 2015. An unstable economy has transpired—inflation has been running above 15 percent since January; the benchmark interest rate has fallen from 17 to 11 percent, having been hiked by more than 6 percent overnight in December 2014; and while the ruble recovered moderately earlier in the year, a 40-percent depreciation was witnessed between May and September, as oil prices slumped once again. Official unemployment has remained low, although with recent data showing that wage arrears were up by 29 percent in September, it would seem that many employees are not getting paid.

The low oil price is ensuring that chances of an export-led recovery remains remote—oil and gas makes up nearly half of Russia’s total exports, while the sector is responsible for approximately 20 percent of the country’s total gross domestic product (GDP). To add to the gloomy outlook, it appears that Russia’s private sector has struggled to plug the oil-shaped gap thus far. With sanctions still in place, producers and miners remain cut off from European lending, and are therefore turning to domestic borrowing instead of foreign debt. A closer inspection of the lauded recent capital inflow figures, moreover, reveals that $7.1 billion of third-quarter inflows have been marked by Russia’s central bank as “net errors and omissions”—effectively illicit flows that have emerged from the manipulation of customs declarations, and which the government is unable to identify or tax.

Serious economic consequences are also expected to materialise from Russia’s recent decision to intervene in the Syrian war. Indeed, it still remains unclear who the intended recipients of Russia’s targeted attacks are—Russian officials claim they are targeting ISIS, while several regional sources have stated that the “moderate” opposition to Syrian President Bashar al-Assad are in the army’s crosshairs, as Russia seeks to continue propping up Assad. Given the support that such opposition groups receive from regional powers such as Saudi Arabia and Turkey, and given the ostensible desire by Russia to form investment partnerships with these countries—the Russian Direct Investment Fund being a prime example, whereby partnerships with the sovereign wealth funds of Saudi Arabia and the United Arab Emirates are expected to bring billions in investment funds into Russia—any Russian military operations deemed to be in conflict with the interests of such countries will drastically reduce the success of the proposed partnerships.

Russia’s economic development minister, Alexei Ulyukayev, recently stated that third-quarter GDP is estimated to have contracted by 3.9 percent. If true, then this would be a marginal improvement on the second quarter’s 4.6 percent contraction and would therefore technically support Putin’s assertion, although such a sizeable figure is not exactly cause for celebration. Nonetheless, in many ways Russia’s economy in 2015 has proven surprisingly resilient; indeed, Sergey Aleksashenko, the former first deputy chairman of the Central Bank of Russia (CBR), believes the economy to be “more stable than many believe”. Domestic investment, for example, has expanded during the year, mainly driven by the growing importance of non-state pension funds. According to VTB Capital economist Alexander Isakov such funds are “set to receive up to RUB700 billion ($10.8 billion) in new investable capital next year, thanks to the influx of capital from workers who opted to take part in the second-pillar pension system”. This would allow employees the chance to apportion some of their pensionable savings to private pension funds, which in turn would direct much-needed liquidity towards lenders and corporates. Government projects to promote a more investment-friendly environment, such as tax freezes and the establishment of new industrial and technology clusters, are also expected to help private investment drive Russia’s recovery back into positive growth territory, which many are expecting will come to fruition by the end of next year. Ulyukayev, for example, expects GDP to grow by 0.7 percent for the full year 2016.

The continuing resilience of Russia’s stock market also deserves praise. Many domestic shares have risen during the year, including those of export-oriented companies such as miners and producers. While the drop in commodity prices was expected to severely damage the earnings of such companies, the weak ruble has mitigated this problem to some degree. Some analysts believe that this stock market buoyancy is being somewhat ignored at present because investors will very likely pull out of emerging markets on the back of the expected US interest rate increase and China’s ongoing slowdown.

Barclays Capital’s fixed income analyst, Daniel Hewitt, believes that inflation has started “a downward cycle that will continue”, which should help to trigger further interest rate cuts by the central bank and ultimately stimulate economic growth. Given the uncertainty of future oil prices, however, as well as the potential for geopolitical issues to constrain foreign investment in Russia, the outlook for Russia’s economy over the next 12 months can be considered anything but predictable.