Top Posts
Challenges Remain, But There Are Opportunities to Be Had in...
Interview with Mr. Olukayode Pitan, Chief Executive Officer and Managing...
Commodities Outlook for 2023
The Value of Cash in a Time of Crisis: How...
The US-Africa Leaders Summit: Fostering a Closer Relationship with the...
Three Key Sectors in Which to Invest in 2023
Home Finance Is the US Dollar’s Role as the World’s Reserve Currency Under Threat?
Finance 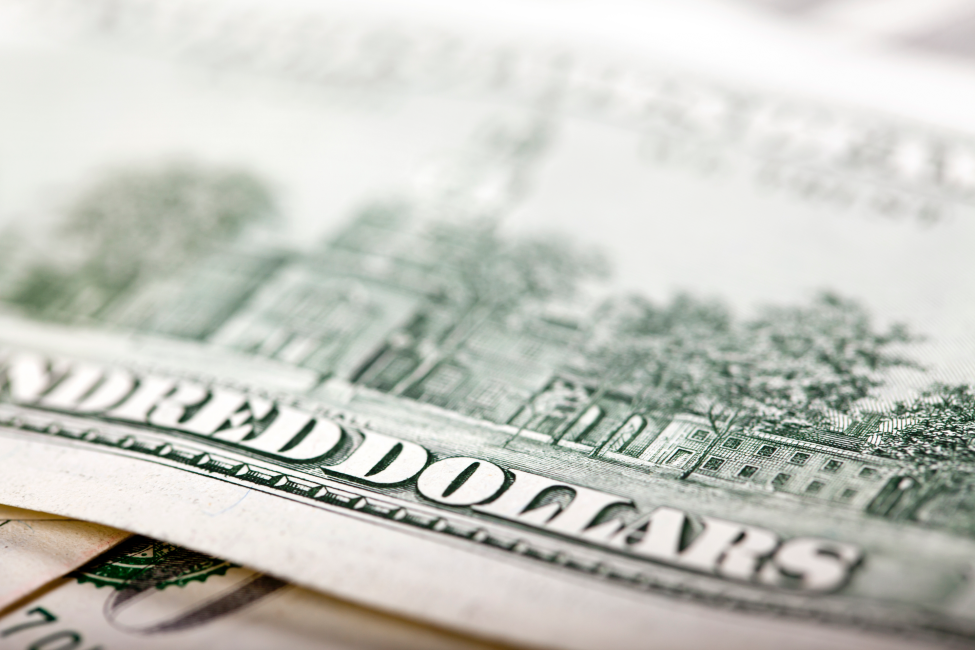 The last decade or so has seen concerns grow significantly over the long-term health of the dollar. Those concerns have only grown in urgency since the coronavirus arrived on the shores of the United States in February, triggering a nationwide shutdown of the world’s biggest economy. Indeed, the decidedly dovish actions taken by the Board of Governors of the Federal Reserve System (the Fed) regarding monetary policy have a growing chorus of analysts even suggesting that the greenback’s status as the world’s reserve currency is increasingly under threat. 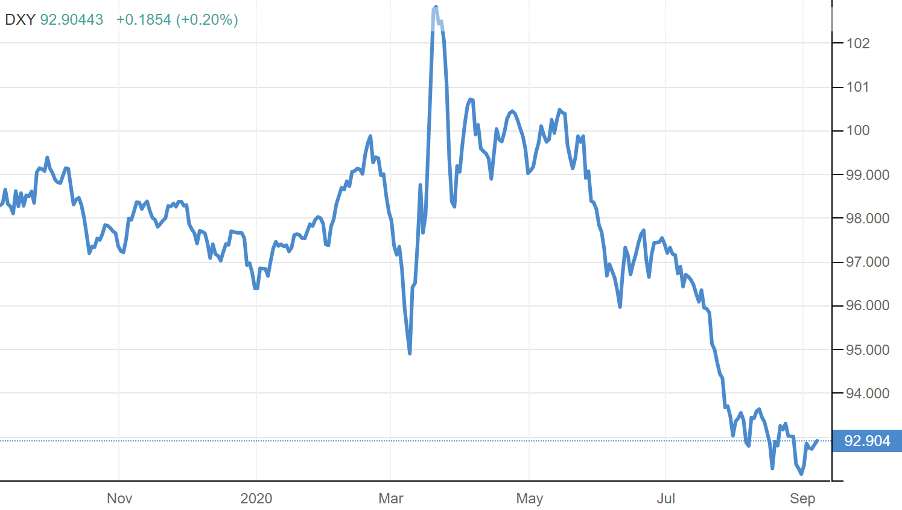 The U.S. Dollar Index, which measures the performance of the greenback against a basket of other currencies including the euro, Japanese yen, British pound, Canadian dollar, Swiss franc and Swedish krona, has trended significantly downward since June and even recently hit a 27-month low. With little to suggest that it will claw back those losses in the foreseeable future—and with many predicting further substantial weakness on the horizon—is it still inconceivable that the US currency might end up losing its hallowed reserve-currency status? Some think not.

Holding such a position comes with several benefits to the host country—in this case, the United States. The unrivalled demand from investors worldwide to own dollar-denominated assets such as Treasury bonds, for instance, allows the US to borrow from other countries at lower rates than would otherwise be the case. And given that the overwhelming majority of global financial markets—particularly commodities such as oil, gold, base metals and agricultural products—are priced in dollars, US investors, businesses and even the government are all significantly less exposed to exchange-rate risks than those in other countries.

But the US could lose all of those perks as a weak coronavirus response, long-term persistence in implementing quantitative easing (QE) and ultra-low interest rates, and concerted drive to encourage higher inflation all conspire to threaten the dollar’s hegemonic influence around the world. Goldman Sachs, for instance, issued a stark warning that the dollar is in serious danger of losing its reserve-currency status. The US bank’s concerns are primarily related to the massive monetary injections into the economy by the Federal Reserve, the balance sheet of which has now topped a staggering $7 trillion thanks to the reintroduction of its quantitative-easing policy as well as the fiscal stimulus provided by Congress.

Goldman contended that investors are becoming increasingly fearful that such policies are debasing the dollar, triggering many to opt for the safety of gold instead. “Gold is the currency of last resort, particularly in an environment like the current one where governments are debasing their fiat currencies and pushing real interest rates to all-time lows,” Goldman strategists wrote in late July. As a result, there are now “real concerns around the longevity of the US dollar as a reserve currency”.

Fellow financial giant JPMorgan Chase has voiced similar concerns, noting that the euro is being viewed as an increasingly favourable substitute. “US economic outperformance relative to the euro area and Japan (no longer) seems guaranteed, at least over the next few years, given the faltering virus response. Furthermore, the European Union’s new EUR 750 billion recovery fund is giving investors more confidence in the euro as an alternative,” JP Morgan Asset Management’s Patrik Schowitz recently noted, adding that with the previous advantage of higher interest rates held by the US over other major economies all but extinguished, this only further diminishes the dollar’s appeal and thus pushes investors to consider deposits in other currencies. “These cyclical factors won’t turn around in a hurry, and the US dollar likely has room to fall further.”

Compounding the issue is the recent completion by the Fed of its review of its monetary policy, which sought to address why inflation has largely undershot the central bank’s 2-percent target. The review concluded that the Fed would adopt an inflation-averaging policy, which effectively means that the FOMC (Federal Open Market Committee) will allow inflation to run above 2 percent for an extended period of time so that the 2-percent target is achieved as an average over a longer timeframe. As such, this policy strongly implies that an expansionist monetary policy—ultra-low rates and QE included—will remain in place for the next few years at least to encourage these higher levels of inflation to transpire.

And as the powers that be continue to pump more money into the economy, the extra supply, it is feared, will have profoundly negative consequences on the value of said money. With all else being equal, therefore, the dollar could well end up in a long-term bear market. And perhaps even more worryingly from the perspective of the dollar’s world-currency status, the insistence of using asset purchases to bolster the money supply gives a distinct perception that the currency is being artificially manipulated and, ultimately, debased. “The resulting expanded balance sheets and vast money creation spurs debasement fears,” the Goldman analysts stated. This creates “a greater likelihood that at some time in the future, after economic activity has normalized, there will be incentives for central banks and governments to allow inflation to drift higher to reduce the accumulated debt burden.”

Further evidence that the dollar is losing its grip on global dominance can also be found in its declining share of total global foreign-exchange reserves in recent years. According to the International Monetary Fund (IMF), the dollar’s share has declined from 64.7 percent in the first quarter of 2017 to just under 62 percent in first-quarter 2020, which itself was a recovery from a low of 60.9 percent in fourth-quarter 2019. 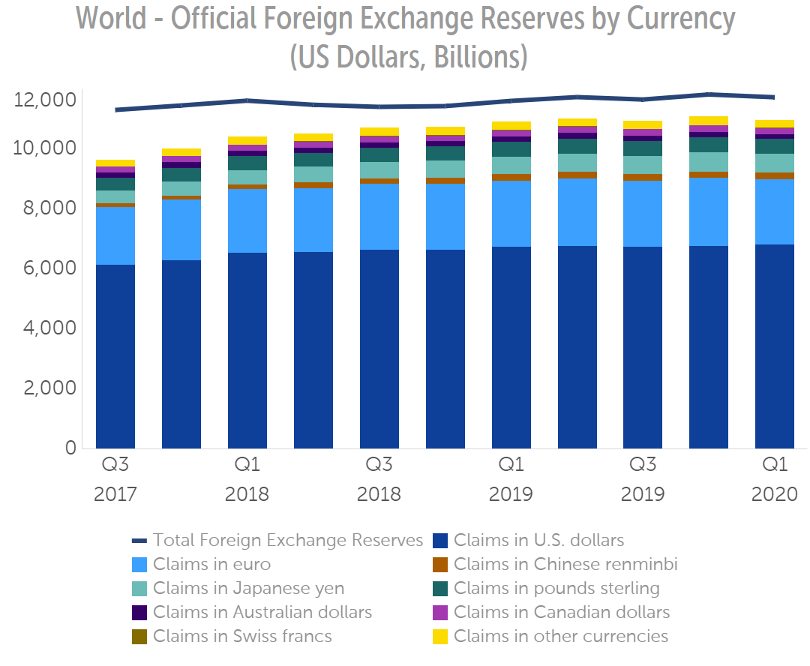 But while the chart shows that the dollar may have experienced modest declines, it also reinforces its overwhelming dominance. According to the Bank for International Settlements (BIS), the US dollar was on one side of 88 percent of all foreign-exchange transactions last year, which only underlines its global supremacy. And when looking around the world, there is simply no other currency that comes close to unseating the dollar any time soon. While some do note that China’s yuan has been used more widely in international trade over the last decade and cite its inclusion in the IMF’s special drawing rights (SDRs) basket of major reserve currencies in 2016, its use in global economic activity still pales in comparison to that of its American rival.

Indeed, a recent report by Morgan Stanley predicted that thanks to growing foreign investment, the yuan could grow from currently representing around 2 percent of global foreign-exchange reserve assets to 5 to 10 percent by 2030. This would mean that it would surpass the yen and the pound to become the world’s third-largest reserve currency behind the euro. Such a target “is not unrealistic in light of the financial market opening in China, the growing cross border capital market integration we see across equities and fixed income and an increasing proportion of China’s cross-border transactions being denominated in RMB,” the report stated. “All of this suggests global central banks will need to hold more RMB as part of their reserves.”

But for all the talk of the yuan replacing the dollar as the world’s reserve currency, it is worth remembering that China continues to maintain strong capital controls on any money that flows in and out of the country, which prevents the efficient functioning of liquid markets that should be accessible to the rest of the world. This limits any possibility of the yuan achieving that coveted reserve-currency status, at least within mainland China.

“The dollar dominates international finance as a funding and investment currency,” the Bank for International Settlements asserted in its June paper “US dollar funding: an international perspective” authored by a working group chaired by Sally Davies (Board of Governors of the Federal Reserve System) and Christopher Kent (Reserve Bank of Australia). “Although the United States accounts for one quarter of global economic activity, around half of all cross-border bank loans and international debt securities are denominated in US dollars.”

Why does this continue to be the case? “Deep and liquid US dollar markets are attractive to non-US entities because they provide borrowers and lenders access to a large set of counterparties,” the paper stated. “The pre-eminence of the US dollar as the global reserve currency and in trade invoicing further motivates its international use.” And whilst the dollar’s funding relative to the size of the global economy is currently well below its peak reached a decade ago, its share in international borrowing has risen again to reach levels last seen in 2000. “It is clearly the dominant international funding currency,” the authors confirmed.

As such, it would seem highly unlikely that the dollar will be dethroned any time soon. As Michael Krupkin, head of G10 foreign exchange spot trading for the Americas at Barclays, told Bloomberg, the US “isn’t anywhere close to losing its reserve currency status given the depth of capital markets and overwhelming volume of US dollar-denominated global transactions”. Nonetheless, its case has not been helped by the actions of the Federal Reserve in recent years. And with the central bank committed to a long-term adoption of policies that will cause only further debasement, those legitimate fears surrounding the health of the greenback that already exist won’t be allayed in a hurry.

Even though it is unlikely that the US dollar won’t be dethroned as the worlds reserve currency any time soon I’m positioning myself, family and friends to be ready when the time comes. Gold, silver precious metals and especially cryptocurrencies are the safe bet to store and grow your money in these interesting times that we find ourselves living in.

The US is spending money we do not have……that always leads to a reduction in leadership and standard of living.