Top Posts
Interview with Mr. Olukayode Pitan, Chief Executive Officer and Managing...
Commodities Outlook for 2023
The Value of Cash in a Time of Crisis: How...
The US-Africa Leaders Summit: Fostering a Closer Relationship with the...
Three Key Sectors in Which to Invest in 2023
Three Key Stocks in Which to Invest in 2023
Home Finance Latin America under Tightening Global Liquidity Conditions: Emerging Markets in a Changing Global Environment
Finance 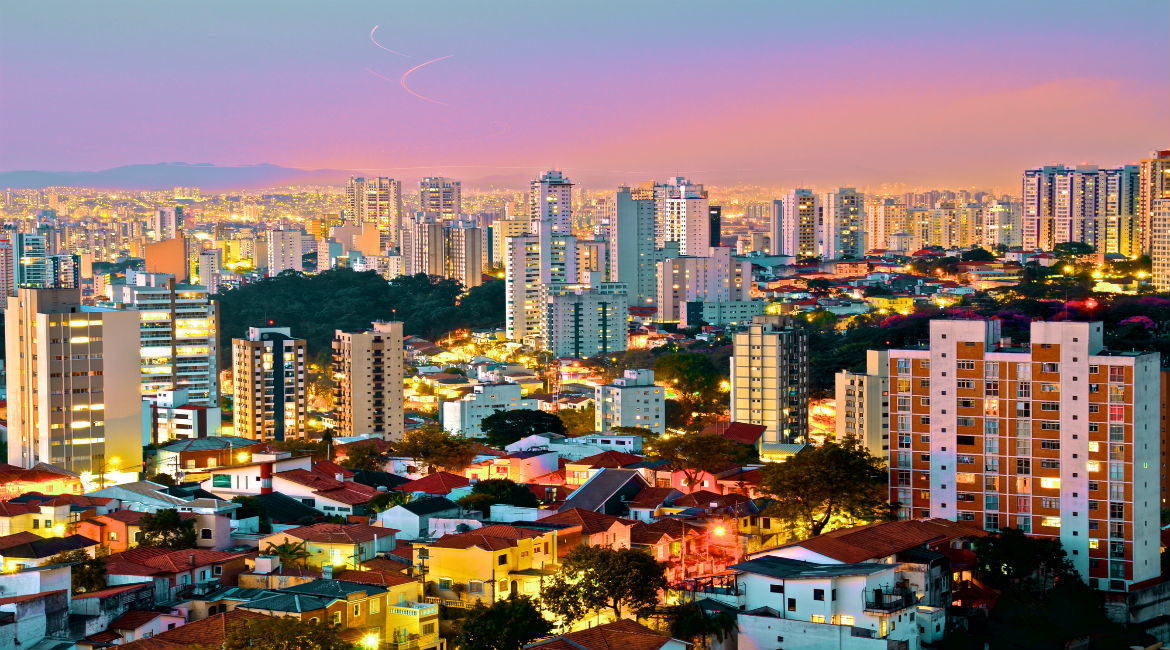 Emerging-market (EM) assets enjoyed significant support from investors during 2017. An environment of economic-growth recovery with moderate inflation across developed markets combined with solid commodity prices and abundant liquidity searching for yield—all contributed to remarkable interest from international investors in EM securities. More than US$75 billion worth of inflows into dedicated EM funds was observed last year, which resulted in significant increases in local stock markets and compression of sovereign yields.

EMs were also off to a strong start in 2018, with flows towards dedicated funds beating records during January. Coordinated growth acceleration in central economies and further increases in commodity prices provided a very fertile ground for EMs. The caveat, however, is that inflation rates have been expected to increase gradually for quite some time, and as a consequence of such a development, central banks in developed markets were projected to tighten their monetary policies after several years of very relaxed stances with historically low interest rates. Not only were policy rates expected to increase in central economies, but also central banks were to gradually shrink their balance sheets, effectively undoing several years’ worth of quantitative easing and pushing both the short and long ends of yield curves upwards. Prospects for stricter global financial conditions were to push volatility indicators higher, suggesting that the international environment—although still constructive—would become somewhat more challenging for risk assets in general.

The sharp increase in volatility observed since the end of January indicates that, after a period of abnormally low inflation and interest rates, some regularities of the global business cycle are returning to the fore. They do not, at the present juncture, suggest an obvious macroeconomic vulnerability, which means that the environment for risk assets and EMs in particular remains positive. After all, strong growth across developed markets and solid commodity prices represent a favorable backdrop for most EM nations. The increase in uncertainty, however, suggests that professional investment managers will have to be more selective and focus on credits with natural embedded protection—for instance, countries with moderate external financing needs and exposure to the positive terms of trade cycles.

There are differences between the recent correction in asset prices and what occurred during the so-called “taper tantrum” of 2013, when then US Federal Reserve Chairman Ben Bernanke first hinted that the era of very accommodating monetary policy would come to an end. Back then, the announcement represented a surprise, while the current situation was more anticipated as per what was suggested by inflation forecasts and US interest-rate futures. The novelty this time is that expectations of monetary tightening overlapped with tax reforms and announcements of fiscal stimulus in the United States. During the first semester of 2013, the US economy expanded at an annual rate of barely above 1 percent, while now it is growing at 2.5 percent and on an accelerating trajectory. Therefore, at a time when the US economy is not far from operating at full capacity, markets started to price in further upward revisions of inflation for the coming months, and consequently the possibility of much more aggressive and lengthier policy action by the Fed. Although the Fed has indicated that it is working with a baseline scenario of three federal funds rate hikes during 2018, recent developments suggest that markets are now anticipating that more hikes may be necessary. While in principle faster growth and tighter monetary policy in the US should lead to a stronger US dollar, the mere fact that the acceleration in growth is happening in Europe as well makes forecasting the value of the US currency more challenging, contributing to the overall increase in uncertainty.

Generally speaking, Latin America is on solid footing to withstand the shock of higher global interest rates. Regional gross domestic product (GDP) expanded by more than 1 percent (estimated) in 2017, after two consecutive years of small declines. The growth pace is projected to pick up further in 2018, mainly driven by stronger performance in Brazil, which could expand by about 3 percent this year. Excluding Venezuela, which is mired by political and economic crises and has entered into the realm of hyperstagflation, all countries in the region are projected to post positive growth rates. Again, excluding Venezuela, consumer prices are expected to rise by less than 4 percent this year, a moderate figure by regional standards (see Figure 1). External imbalances—as measured by the magnitude of the current account deficit as a proportion of GDP—have gradually declined in recent years, and in many cases are now more than offset by foreign-direct-investment inflows (see Figure 2). Commodity-rich Latin America should benefit from stronger prices across the commodity complex, with positive impacts on external accounts and the fiscal bottom line (see Figure 3). Regional banks are well-capitalized and properly regulated. And more importantly, most countries in the region have flexible exchange-rate regimes. That is, floating exchange rates should serve their proverbial shock-absorbing roles when global financial conditions tighten, thus greatly dampening the impact of higher global interest rates on economic activity. In addition, a large portion of the regional public debt is denominated in local currencies and not indexed to inflation, which provides a natural protection for public finances to increased financial volatility. 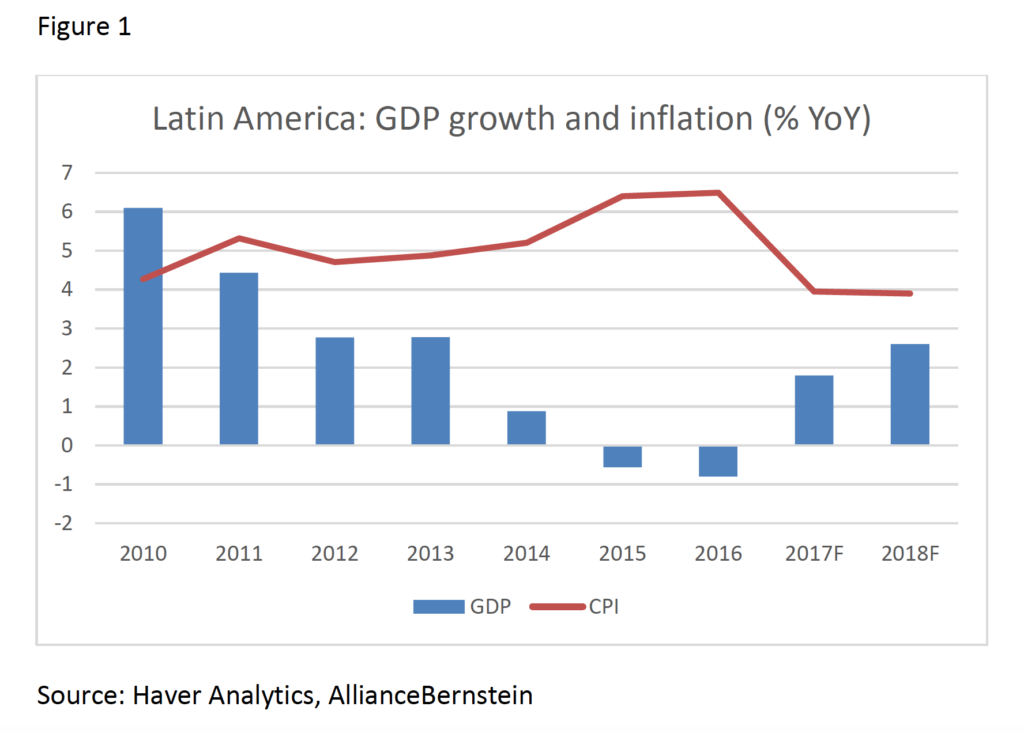 In Latin America, the changing global environment will be accompanied by important political events, as potentially regime-switching presidential elections are scheduled to take place in Colombia (May), Mexico (July) and Brazil (October) this year. In all three countries, the races are unusually contested, with outcomes still very difficult to call and with the proportion of undecided voters in the polls still very high.

In Colombia, although the country has had a tradition of conservative policymaking, the race is still competitive among several candidates, according to the main polls. The country is benefitting from the rebound in oil prices, but the room for maneuver on the fiscal front is limited if a downgrade towards the sub-investment-grade level is to be avoided.

In Mexico, a center-left candidate is currently ahead in the polls, and his victory could represent a possible turnaround in economic policies. The impressive list of structural reforms enacted in recent years was the result of reforms to the Constitution, however, so that given the prospects for a divided Congress of the Union in the upcoming election, chances are good that those reforms will not be overturned—changes to the Constitution require a qualified congressional majority. The implementation of some of those reforms, however, could be slowed down.

In Brazil, uncertainty remains high as a large number of candidates are still in the race so that atomization of the vote is a real possibility, resulting in governability challenges for the next administration. Brazil managed to introduce several important reforms in the past two years, including labor-market deregulation, a cap on public spending in inflation-adjusted terms and the elimination of subsidies to development-bank lending. The fiscal situation, however, remains tenuous, so that the next government, regardless of its political orientation, will have to tackle the problem of a mounting burden of pension liabilities.

While some candidates in each of the three countries have made controversial remarks on economic policy, it must be noted that the capital account of the balance of payments is open across the region these days, so that the discipline provided by immediate market reaction to policy mistakes (i.e., capital outflows leading to quick currency weakening) may be strong enough to prevent severe macroeconomic disruptions.

NAFTA and the specter of protectionism

In addition to the domestic political developments, the resolution of a renegotiation of the North American Free Trade Agreement (NAFTA) driven by the Trump Administration remains uncertain. The outcome of such negotiation is particularly relevant for Mexico, but it could also have reverberations across the EM universe, because of the impact of a potential change of the rules of international trade on cross-country commercial and financial flows. The early bombastic rhetoric of US officials towards NAFTA has become more moderate, but significant differences among members on crucial issues remain, which suggests that negotiations will take longer than initially expected and that a new accord may not be in place until next year.

EMs in general and Latin America in particular will benefit from accelerating economic growth in the major developed economies during 2018, via robust demand for exports and solid commodity prices. Gradual increases in inflation across the developed world, however, coupled with a withdrawal of quantitative-easing policies are expected to result in increases in interest rates across all maturities in central economies. Several EM economies are on solid footing to withstand the more challenging global environment, but tightening liquidity conditions suggest that selectivity will become a key determinant of dedicated EM portfolio performance in the months ahead.