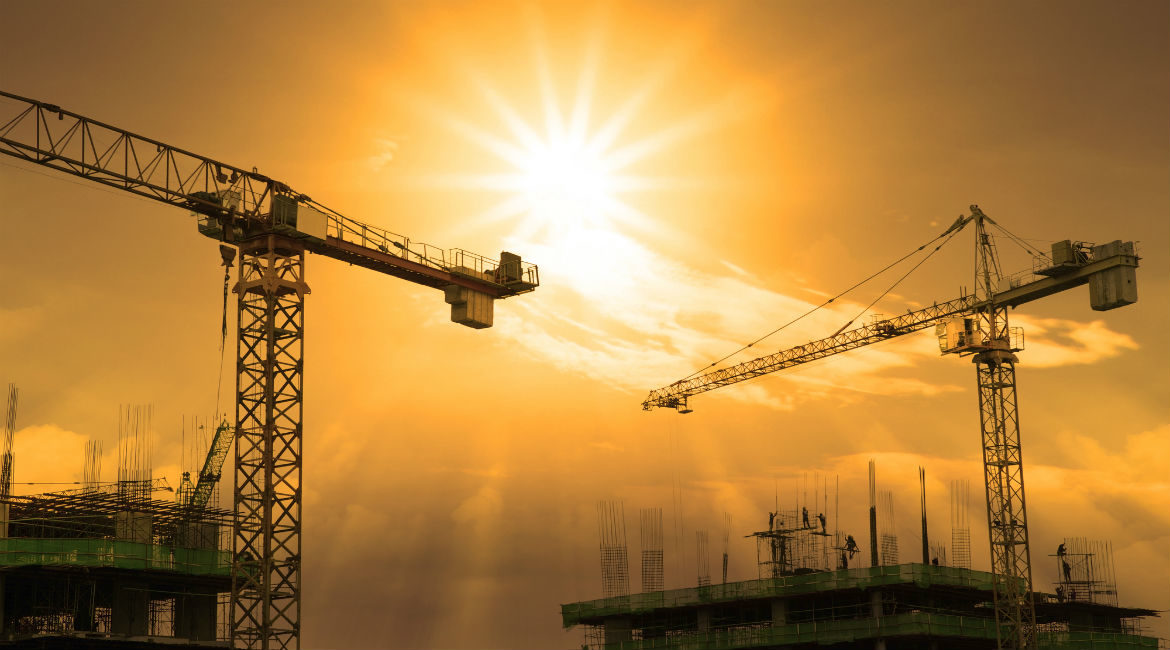 By Marcello Estevão, Brazil’s Deputy Minister of Finance for International Affairs, G20 Deputy, and Chairman of the Board of Directors of the New Development Bank, Shanghai

Economic growth is crucial for raising social welfare. But higher growth is quite dependent on a well-functioning, productive infrastructure, which is severely lacking in many countries, even some developed ones. Policymakers and practitioners around the world have been debating for years how to close this infrastructure gap.

By all measures, the gap is enormous. The Global Infrastructure Hub, established by the G20, estimates that the world needs about US$94 trillion in infrastructure investment between 2016 and 2040. This would be about $18 trillion more than would be delivered on current trends; it is a challenge shared by low-, medium- and high-income countries. [Chart 1] 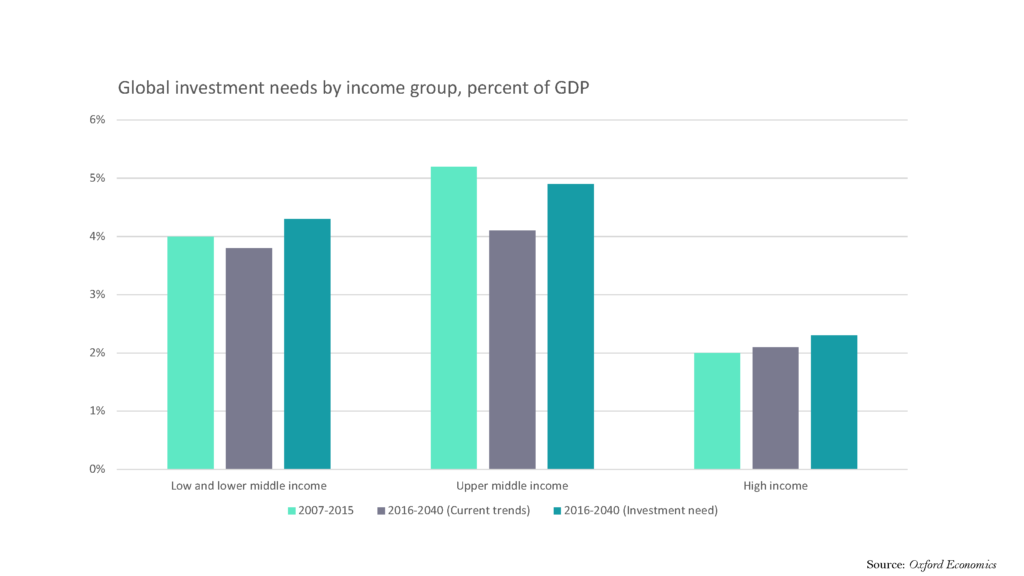 Moreover, despite being responsible for financing most of the investment in infrastructure in the recent past, governments have cut investments since the global financial crisis, including in several developed economies. [Chart 2] 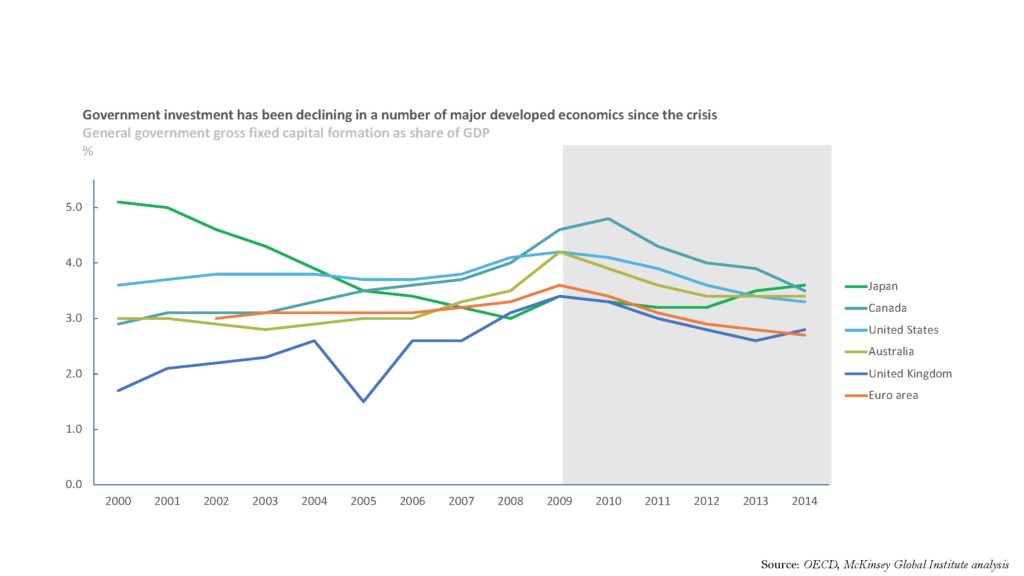 To plug such a hole when governments are strapped for cash, the private sector needs to step in and, for instance, divert to infrastructure building a larger share of the $120 trillion in assets under management in the hands of banks and institutional investors, according to McKinsey Global Institute. Currently, according to the OECD (Organisation for Economic Co-operation and Development), only a little above 1 percent of the assets held by insurance companies and pension funds in OECD countries is invested in infrastructure as either unlisted equity or debt.

That begs the question: Why don’t private-sector entrepreneurs invest more in infrastructure?

Indeed, institutional investors, especially pension funds, are always looking for assets to match their long-term liabilities. However, building infrastructure requires good assessment of needs, planning, large amounts of capital and time to build—all aspects embedded with substantial risks. Long-term projects can be delayed because of changes in governments, policies and regulations, and by other large construction risks. Attracting foreign capital is often a problem, since currency risks are also quite hard to hedge against, especially in emerging markets and developing countries. Given high sunk costs, these risks could imply losses that are too large to be tolerated even by the most adventurous of investors. Furthermore, information is not easily processed or available to investors—although it is often owned by the public sector and multilateral development banks (MDBs), thus hampering the needed analysis for tracking asset records and establishing benchmarks. And even if private entrepreneurs want to invest more in infrastructure, well-thought-out projects are scarce. Because of all of these issues (and others), investing in infrastructure remains mostly limited to a set of sophisticated investors.

Therefore, to attract more private capital to the infrastructure sector, we need tools to better allocate and mitigate risks, and to reduce transaction costs by enhancing the availability of information and projects, as well as standardizing more contract features to lower “fine print” risks and uncertainty about unpredictable disruptions in projects. If governments and other institutions successfully achieve these objectives, even “regular folks” could become investors. Then infrastructure would become a true asset class.

Representatives of the 20 largest economies in the world (and some guest countries)—the G20—have been discussing this year how to lower transaction costs and mitigate risks so that all countries benefit from more private investment in infrastructure. Some initial, concrete output has already been produced, and the work will continue in the coming months and years. Let me give a flavor of our work.

To reduce transaction costs, governments and MDBs are collaborating to provide the broadest possible database with information on investment flows and returns, covering many types of projects and geographical locations. Given different data platforms and definitions across these institutions, and confidentiality issues, this task is hard to accomplish. G20 countries and MDBs are investing resources into this problem, though, hoping that such a database would give investors a sense of past performance and the locations where their investments would be most needed and profitable. The database could also include the ESG (environmental, social and governance) dimensions of infrastructure, disclosing information that addresses its lifecycle costs and benefits, helping both investors and regulators.

Second, decisions on which types of investment should take place, and how projects would be elaborated and conducted, could be improved. The recently issued G20 guidelines for project preparation are another step in the right direction. The document includes a methodology for establishing the project’s rationale, an options appraisal approach, the project’s commercial viability (including its long-term affordability) and the deliverability of the proposed project. Even though these are general guidelines, they signal how countries could identify, prioritize and implement projects. For that to work, many governments need to design a good system of concessions and/or public-private partnerships (PPPs) focusing on a fair and competitive process. Finally, multilateral and national development banks can collaborate more to perfect (and publicize!) their many project-preparation facilities for infrastructure.

Third, infrastructure-building contracts could be more standard to reduce the costs and complexities of a project’s bidding and procurement phases. That would also render contracts more comparable across countries and types of projects, facilitating investors’ analysis and decision-making. Full standardization is not possible nor desirable, but there are areas of improvement among the myriad clauses and procedures now commonly used. For instance, force majeure clauses tend to vary a lot from contract to contract and sometimes are viewed as an afterthought—a dangerous attitude given the large amounts of capital employed in infrastructure projects. International bodies should produce a set of force majeure clauses for different types of projects, with governments and other institutions encouraging their use. An ideal force majeure clause would account for all possibilities so that governments could still make policy choices about risk allocation, but nothing would be left to chance or be ambiguous. Turning to financial-funding contracts, greater standardization would reduce costs, improve disclosure and reporting, simplify credit-rating processes and increase the pool of similarly structured projects, which would help to deepen the secondary market for their associated debt and equity.

Turning to risk mitigation, the collaboration of governments and MDBs with the private sector should balance protecting investors from overwhelming risks while still leaving untouched a healthy dose of risk. More generally, public-private partnerships (PPPs) should assign risks depending on who controls the project and who is less risk-averse. A good design for a PPP project could have the private sector financing the construction, being responsible for the maintenance and operation of the asset, and collecting revenues, while the government holds the residual risks. In theory, those risks could be pulverized by spreading them to taxpayers. Variations on these aspects would depend on project features, degrees of private ownership and other factors. In practice, the decision to embark on a PPP project depends on the needed sweeteners to attract a private partner. For instance, when the provision of infrastructure requires significant public subsidy to cover its cost of capital and operations, it would be more cost-effective to finance the project as a government asset via public finance.

Credit enhancements and guarantees could also be powerful forms of mitigating private-sector risks, although they have not been used widely. Researchers of the Inter-American Development Bank (IDB) argue that guarantees represent only around 5 percent of MDBs’ portfolios, although they account for 45 percent of the private resources they mobilize. They also see both supply and demand reasons for this low level of guarantees. On the supply side, rules determine that capital provisioning for guarantees be equivalent to that of a loan. Moreover, the mentality of MDB officials has been biased towards using investment lending as the main tool to building infrastructure. On the demand side, private investors tend to claim that high costs, complex structures and conditions, lengthy negotiation and approval processes, limited risk coverage, low flexibility, and slow claim payments render MDBs’ guarantees unattractive. A taskforce of MDB representatives is looking into this issue. Close interactions with credit-rating agencies and rulemaking bodies will be needed to lessen the capital burden imposed on guarantees.

Credit enhancements and guarantees may also be preferable to direct financing by development banks because they minimize the possible crowding out of private-sector financing. Direct financing supports infrastructure investment because it offers good credit terms and boosts investors’ confidence that the project is well prepared. However, direct financing also tends to suppress lending margins and credit spreads, thus often preventing the development of a deeper capital market. By helping the private sector to hedge or avoid altogether some types of risk (charging a fee for the financial instrument or guarantee, of course), development banks would be treading more lightly on capital markets, letting private capital flourish, which would support higher rates of economic growth.

Going beyond changing policies and procedures directed at the infrastructure sector itself, more private investment in the sector depends on a good macroeconomic framework, and the overall stability of laws and regulations. Indeed, macroeconomic risks in certain countries push financing costs beyond what projects can bear and may render certain market risks too expensive or impossible to hedge. Policy frameworks that lower sovereign risks and foster domestic capital markets in emerging-market countries and developing economies would alleviate some of these problems. At the end of the day, these countries cannot reach higher levels of income without strengthening their institutions; a basic, well-known but still profoundly right proposition.

On this fertile ground, the actions laid out here to attract private capital to infrastructure projects would help economic growth flourish around the globe.

The Dawn of the Platform Economy in Financial Services