Top Posts
Challenges Remain, But There Are Opportunities to Be Had in...
Interview with Mr. Olukayode Pitan, Chief Executive Officer and Managing...
Commodities Outlook for 2023
The Value of Cash in a Time of Crisis: How...
The US-Africa Leaders Summit: Fostering a Closer Relationship with the...
Three Key Sectors in Which to Invest in 2023
Home Finance Making Sure that Everyone Plays by the Rules: Harnessing a global-partnerships approach to tackling corruption
Finance 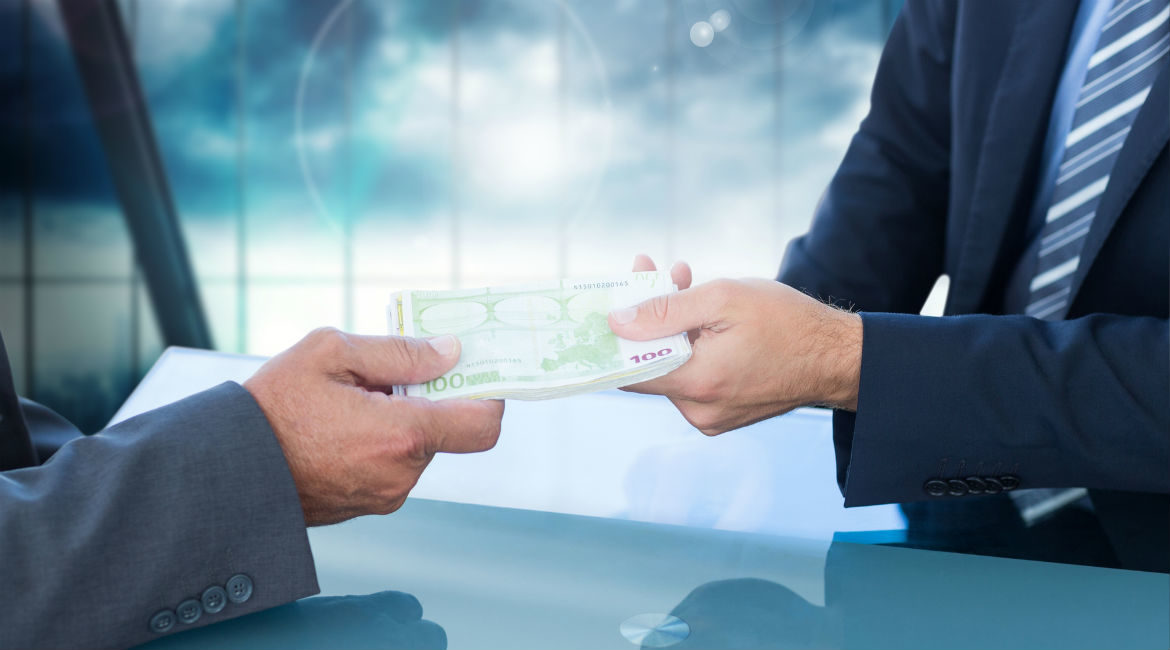 It is common to hear that “you know corruption when you see it”. Yet the definition and characteristics of corruption remain a topic of academic and policy debate. The most commonly used definition of corruption is “abuse of entrusted power for private gain”, coined by Transparency International. This definition is subject to a number of different interpretations, as the notion of abuse, for example, can have different meanings for different people. A working definition of corruption, however, is needed for policymakers who work on overarching government strategies on anti-corruption and governance, as well as businesses that ensure their processes not only comply with the minimum government requirements but seek to demonstrate high standards of ethics and integrity within all operations.

Businesses across the board recognise that engaging in and facilitating corruption has severe reputational, financial and criminal repercussions. It has become riskier to engage in corruption, with the passing of new laws such as the 2010 UK Bribery Act that criminalises a number of acts of corruption, such as bribery of foreign officials by British companies and failure to have adequate procedures in place to prevent bribery. Important governments in emerging markets, including the Chinese and Indian governments, are taking strong measures to curb it. Consumers are also increasingly paying attention to the ethical practices of businesses.

As a result, many companies go beyond the legally required due-diligence procedures and put in place additional measures to safeguard against corruption and to ensure integrity within their operations and supply chains. This can include extensive background and reputational checks on potential business associates, clients and sub-contractors. The exhaustiveness of checks varies, depending, for example, on the perceived risk of the client and size of the transaction. These checks, however, increase the cost of doing business, extend contracting timelines and require a resource investment. The “human element”, or personal banker-client relationship, might also have an influence on due-diligence procedures.

Banks can play a crucial role in facilitating the use of the proceeds of corruption. Banks need to work proactively to identify whether their clients have adequate anti-corruption policies, procedures and values. Cooperation with regulators, law-enforcement institutions, policymakers and businesses is vital to ensure that the integrity requirements placed upon businesses are proportional and appropriate; it can also significantly assist law-enforcement authorities in carrying out their duties. The international nature of both corruption and banking makes such cooperation not only necessary but also at times challenging, due to the varying laws, standards and compliance requirements across countries.

Clear signals are being sent that a bank’s checks of potential customers cannot be restricted to a simple tick-box “know your customer” (KYC) exercise—for example, just requiring the potential customer to state the source of their funds, with no further questions asked or checks being done. The fines imposed by the United Kingdom’s Financial Conduct Authority and US regulators for inadequate anti-money laundering controls illustrates the seriousness with which client on-boarding and KYC requirements are being taken by the authorities.

Concern with corruption is not a recent phenomenon. However, there has been increasing evidence and awareness regarding the impact of corruption on countries’ economic growth, security, stability, and social indicators such as inequalities and social mobility. The World Bank’s 2017 World Development Report stated that corruption is “one of the biggest roadblocks to effective, lasting development”. These effects can be particularly acutely felt in countries that experience high levels of outflows of funds. It is estimated that developing countries lose $1 trillion a year to illicit financial flows.

It can, however, be hard to disentangle the causes and effects of corruption. For instance, while corruption is likely to engender a distrust of public institutions, lack of trust in public institutions will also be an incentive for people to engage in activities that might be classified as corrupt by others. It is therefore important to ensure that entire systems of corruption are being addressed, at all levels where corruption might occur—from the top governmental level to civil society and businesses. Collaboration, transparency and partnerships between different entities are necessary to combat corruption.

The fight against corruption has been gaining prominence globally. In 2016, the United Kingdom held an international summit on anti-corruption, which was attended by 50 country delegations, with 12 headed by presidents or prime ministers. The summit saw strong commitments made by the delegations present to step up the fight against corruption. At the same time, laws against offences of corruption have been strengthened. For example, the UK’s adoption of the 2010 Bribery Act has started yielding results, including the first conviction under Section 7 for failing to prevent bribery (and to have the adequate procedures in place to prevent bribery). A listed company was sentenced under Section 7 of the Act and ordered to pay £2.25 million.

Furthermore, the UK government recently published a consultation paper that considers further extending the reach of Section 7 of the Act to financial crime. This would include money laundering, fraud and other offences in addition to bribery. The UK Parliament is now considering a new Criminal Finances Bill that, among other provisions, would introduce unexplained wealth orders to demand explanations of legal sources of income for suspicious transactions or assets, as well as to facilitate asset recovery.

Getting one’s house in order, particularly in the context of illicit financial flows, is good practice for Western states assisting others in an international-development context. The UK has started this with a number of its commitments at the 2016 Anti-Corruption Summit, including having become the first member of the G20 to establish a public central registry of company beneficial-ownership information. It is also working on convincing other members of the G20 to follow suit. A lot, however, remains to be done within the UK itself, particularly within its Crown dependencies and overseas territories, such as the British Virgin Islands and the Cayman Islands.

When discussing global anti-corruption agreements, approaches and regimes, it is worth considering who sets the rules and who polices them. In the context of corruption, setting the rules can refer to determining which actions constitute corruption, what safeguards must be put in place by different institutions and states, and the repercussions for engaging in corruption. As it is usually the more powerful actors setting the rules, less empowered ones—minorities, small and medium companies and micro-states—might find themselves at a disadvantage. Universal standards might pose a disproportionate burden on the smaller actors, either forcing them to divert funds from other self-identified priorities or pricing them out of some industries or markets. 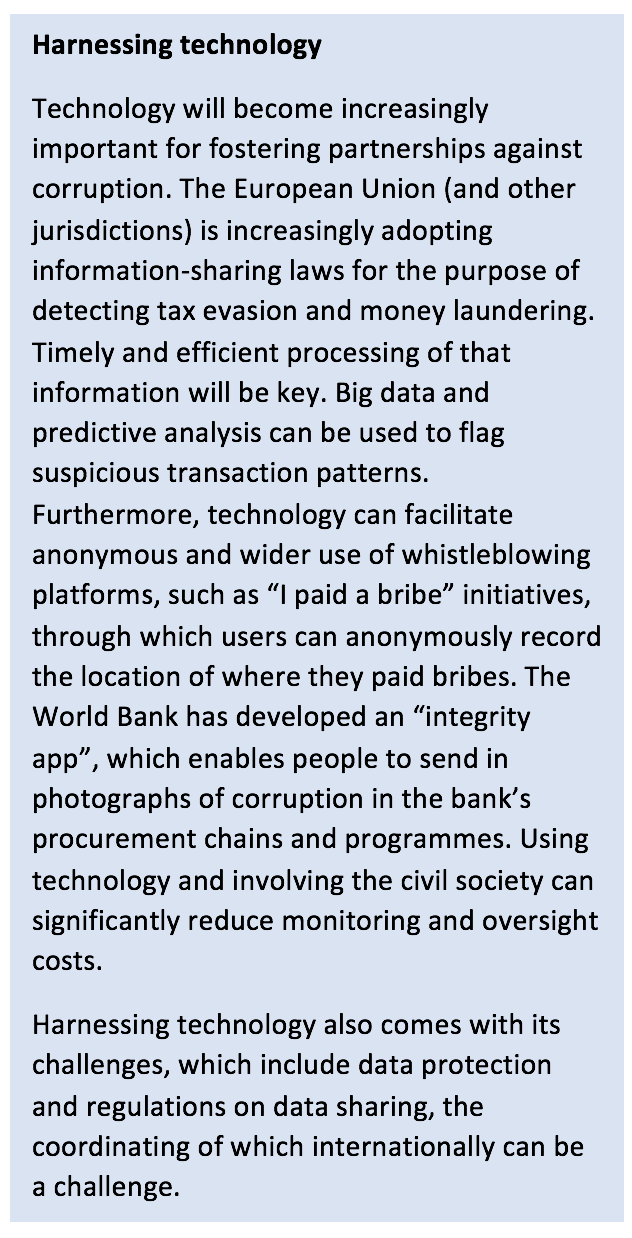 Within the context of international development aid, government rhetoric is changing. The UK, for example, has increasingly stressed the mutually beneficial nature of international development assistance, and is adopting more overtly a partnership approach to international development. The UK’s aid strategy is entitled “UK aid: tackling global challenges in the national interest”. It clearly sets out that tackling corruption “will also strengthen our own national security at home…and will also create opportunities for international business, including UK companies”. The Economic Development Strategy recently launched by the UK’s Department for International Development (DFID) confirms that DFID will continue to invest in a partnership approach to tackling corruption, and that it will support partnerships between UK government institutions that work on anti-corruption (including regulators, law enforcement and tax authorities) and their counterparts in the Global South.

As such, the UK is investing in international development programmes to build partnerships between its institutions that work on financial accountability and anti-corruption, as part of a number of programmes to be launched in 2017 by DFID. (This includes programmes such as GREAT for Partnership and a Regional Facility for Strengthening Transnational Responses to Countering Illicit Financial Flows, Corruption and Organised Crime in Africa.) Such programmes can be beneficial not only in facilitating the transfer of skills and knowledge from the donor to the recipient of international development assistance, they can also facilitate the donor learning from the recipient in areas in which the latter is more experienced or innovative. One of such areas would be the regulation of the mobile-banking sector, in which East African states have more experience than their European counterparts. 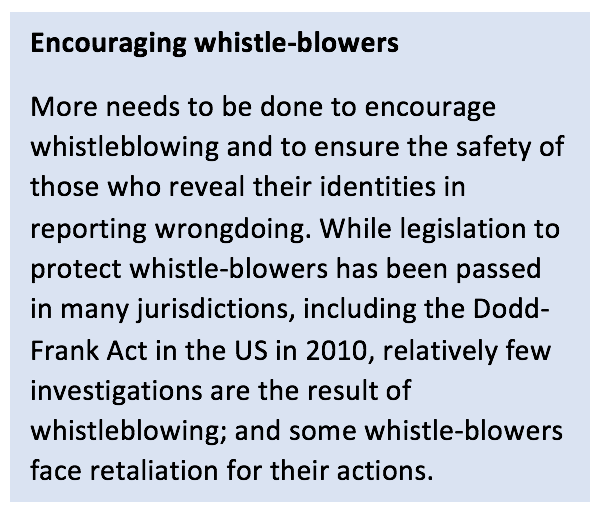 Collaboration is necessary between different entities within a state—banks, law-enforcement institutions and other private-sector and civil-society organisations. This is most developed in the area of money laundering, with initiatives such as the Joint Money Laundering Intelligence Taskforce (JMLIT), which was set up for the financial sector to more effectively share information and collaborate with the UK’s law enforcement to combat money laundering. JMLIT was successful at initiating and sustaining a regular dialogue between the different institutions. This can help the government and law-enforcement authorities be more up-to-date with new developments within the private sector and be more in touch with the practical implications of the requirements that are placed upon financial institutions. The private sector benefits from the opportunity to better understand and influence anti-bribery and corruption (ABC) legislation, which companies have reported as being difficult to keep track of. Expanding such initiatives to other offences of corruption could be worthwhile.

The agenda and approaches to combatting corruption should be put together and implemented in partnership with the financial-sector, professional-services, industry, media and civil-society actors. This can help ensure that everyone is aware of the rules, and that anti-corruption work is based on the most appropriate approaches and technical knowledge that might be found either in government, law enforcement, civil society or the private sector.

Is There Now Light at the End of the Tunnel for Argentina’s Economy?

France’s Election and Its Implications for Europe