Top Posts
How Technology Is Helping to Solve Global Supply-Chain Issues
UK Inflation Climbs to Fresh 40-Year High
Extended Reality and the Metaverse Are Leading Financial Services into...
Digital Currency: India’s Move Towards a Digital Financial System
Algarve Snapshot: The Growth of Overseas Buyers
Will London Have to Send More Banking Jobs to the...
Home Finance Manufacturing in Europe: Re-emerging or grasping at straws?
Finance

Manufacturing in Europe: Re-emerging or grasping at straws? 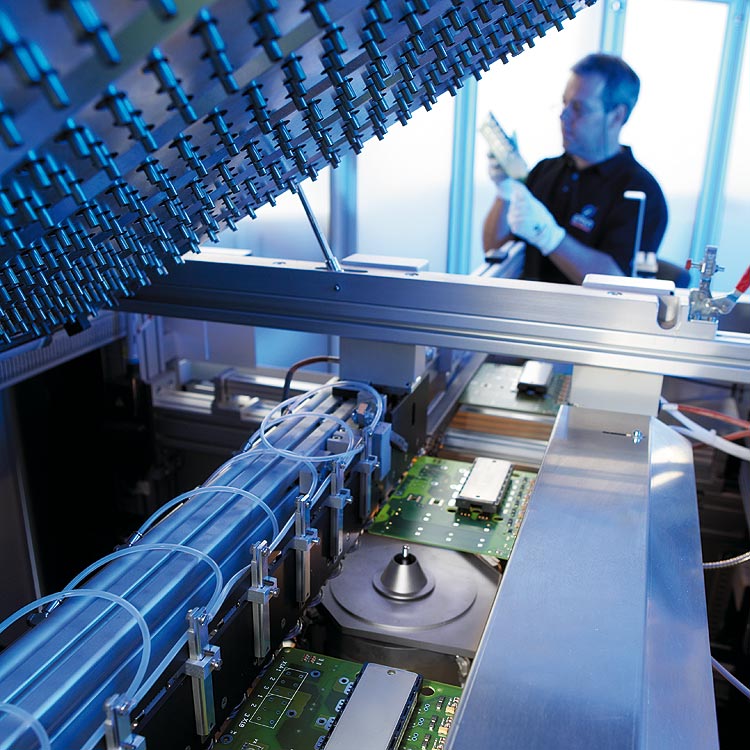 Smiling faces, green trees, blue skies, a winding road leading to a hill with the sun rising behind it, have all traditionally been part of billboards advertising a new development, economic growth, industrial might, elevation of living standards, to name but a few of the uses of subliminal advertising. Has not the same thing been happening to words, ever since somebody used the word “Volk” to unite and then destroy the very entity he was referring to and addressing?

There is a proposition that the word “manufacturing” is also one the demagoguery of our era has used and abused, thankfully not with the same consequences. A good definition by Wikipedia (http://en.wikipedia.org/wiki/Manufacturing ) is that “manufacturing is the production of goods for use or sale using labour and machines, tools, chemical and biological processing, or formulation”. In its very nature therefore, manufacturing refers to mass or bulk or discrete production to satisfy a demand, a process that invariably employs and thus remunerates people for its implementation.

It also came to pass that manufacturing is a game loads of people can play, irrespective of colour, race, religion, creed or indeed location; the only parameters missing for a number of decades for the East to take the leading role over the West in the “making of things” were a modicum of social stability in the former and a lack of far-sighted entrepreneurs in the latter. Once these were attained, both the adherence to process instructions and the absence of cost-adding state institutions and legislation, created what is today aptly named the “Made in Japan/Taiwan/China” phenomenon. Moreover, the Eastern countries, facing lack of natural resources and a “waste-not-want-not” attitude, instead of copying the admittedly wasteful Western manufacturing methods, turned them upside-down, thereby creating the new “lean” paradigm.

While this real Eastern renaissance was taking place, the continent of Europe was content with having half of its area imprisoned, and thus irrelevant, behind an Iron Curtain, with the other half playing some game of “mock” competition with illusionary short-term profits, happily enjoying the fruits of abundance and propped up industrial harmony. Welfare states burgeoned and industrial regulations amassed, ostensibly caring for extreme human suffering scenarios presented as the norm by politically motivated parties. It was only after the 2002 decisive rationalisation of the German welfare state, that some whiff of a paradigm change stirred the air; still, it would take many years for the European industry to be truly allowed to feel the gale-force winds of cut-throat competition and manufacturing within the newly founded EU, for its first few years at least, pretended not to notice its gradual withering, thanks to currency eccentricities and state interference.

In the meantime, Eastern European countries were freed, thereby presenting the continent with an opportunity to create, in manufacturing terms, its own “East” far closer to the home European market. Albeit institutionally robust, the European countries of the former Iron Curtain did not hesitate to restructure, to the opposite of their former self in terms of worker rights and welfare demands. This did indeed provide some sort of safe haven for the western firms, many of which gradually moved their operations there in order to take advantage of, among others, the purchasing power differentials. It was yet another buffer that cushioned European manufacturing from the full mettle of global competitors and gave the gravy train of the private sector some more time to enjoy the peace and quiet of former years.

In that respect, one should make the distinction between what is colloquially called the “Anglo-Saxon” model and that of the “Continental” system, both terms in relation to manufacturing. As the UK has had the experience of the Thatcher decade, enhanced labour flexibility allowed the crucial resource to be the human element, while within the continental practice, labour regulations and state subsidies, forced companies to become more industrial-assets oriented. Thus, the German industry is not unjustifiably said to be more technologically endowed than the UK in terms of plant and automation, with the UK firms dealing with excess demand by employing more emergency labour resource. This has allowed the continent to produce at a competitive unit cost, surreptitiously though turning it quite defenceless in times of economic austerity, like the ones Europe was destined to live through and is living through as we speak.

The old Buffett maxim “when the tide goes out, you find out quickly who is not wearing a bathing suit” found its perfect application in the European manufacturing base of the 1st decade of this century: entire countries going bust, unable to shelter their supposedly healthy corporate citizens, to whom the withdrawal of global liquidity and generous state patronage caused the equivalent of a blood-clot; geared for mass production at a time of suddenly and unexpectedly reduced demand, they began churning out unemployment slips to their workers, as they couldn’t even service the interest payments their huge manufacturing capacities had them commit to earlier. It did look like the end of the road for the continental European model wherever this was employed, including cases in the UK.

However, the straights do not appear so dire after all for the Europeans, thanks to the very definition of manufacturing and the way this has evolved as discussed above. It turns out that manufacturing, in the sense of its very definition, used to be such big a deal once because, in European and American hands, it was responsible for the biggest chunk of the product cost and thus price. The implication and perception was that manufacturing an item is where the greatest value-added lies, a fact that did not have to be the case, as the “lean” techniques the East ably discovered proved. Value is now understood to lie among others in astute marketing, professional logistics and innovative design, as well as combining resources cleverly to gain optimisation and obtain the best synergy among erroneously perceived as conflicting objectives.

It is true though that none of the above could have been possible with the timing and precision required, if the dissemination of the Internet and, more correctly, its commercial applications hadn’t dawned when it did. Neither would this paradigm change have been so seamlessly applied if the World didn’t possess the huge asset of the English language to turn to in order to communicate intelligently, despite the advent of the bureaucracy-imposed Esperanto that never really took off. One might even get away with arguing that the entire European way of life and evolution were spared a cataclysmic setback by the universal need to agree and implement global standardisation in as many fronts as possible;

as standards and needs evolve, this is being done at the speed individual circumstances dictate as conveniently expedient per country or individual, whichever is faster.

Another undeniable fact that saved European manufacturing from what could have been total annihilation is undoubtedly the creation of the Euro. Apart from the economies of scale in terms of transactional costs, the continent has now a currency the value of which, thanks to its botched introduction regarding individual EU members convergence, has allowed the industry to operate at a relatively low exchange rate to other major currencies, thereby making exports innately competitive. The ability to help increase European exports at a stroke by just threatening to delay any instalment of the Greek debt repayment for a week or two or by creating a minor fracas within the various EU admin layers in that respect, must be a welcome relief to the European powers that be.

Thankfully, however, the World did not stand still for the European politicians to clean up their own Aegean stables. Using the new paradigm of added value, peculiar hybrids started emerging all over, combining competitive advantages not only at country level, but at the very level of each individual contributor. Having realised the shift of value from the product-making, previously called “manufacturing”, to the actual product positioning, people create virtual chains that link advantageous manufacturing to expert logistics and innovative design to brilliant market-ability. Online virtual market places bring the demand and supply of skills together, thus facilitating the creation of the most competitive “brain-ware” value chain.

It can be argued that in this particular arena Europe can play a leading role in the foreseeable time horizon. With an above average educated personnel pool, the need for nearly every country comprising it to restructure itself and a flow of immigrants from the Near and Far East providing flexible labour, the prospects may yet be in Europe’s favour, as far as value-adding activities in a global interconnected World are concerned. On the other hand, institutional harmonisation, both in the form of comparable legal frameworks and standard of living requirements, is an avenue the, so far, low-cost economies can’t but embark upon, thanks to both an institutional player (chiefly the World Trade Organisation), but mainly human evolution and market realities. This latter point has to do with process/product requirements forcing the hand of companies to comply with specific quality and technology certifications, all of which have, so far, managed to convince even Red China to run their own brand of capitalism, indicatively enough starting with areas geographically close or with easy access to Hong Kong.

It all looks like there is a safe evolutionary process going on, thankfully based on enhancing the freedom of the individual and thus theoretically unstoppable. One can even see Europe re-invigorated and emerging as a World power in manufacturing, provided the pendulum is allowed to swing freely. Still, in the course of human events accidents have happened that delayed or even reversed the human progress. This discussion has attempted to convince that it is a fallacy to rest the course of this evolution on manufacturing; it has proposed instead that the best way to judge Europe’s chances on becoming a continent resembling the “happy growth” billboard lies solely on its ability of becoming a truly global corporate citizen. For that to be achieved, let’s make sure we understand that the saying “a journey of a thousand miles begins with a single step” is true irrespective of the length of the journey, or the distance already travelled.

About the author – Stelios Kapourniotis is a consultant currently based in Greece. Mr Kapourniotis holds two UK degrees in Production Engineering and Management, the last one from Cranfield University. He has manufacturing management experience in both the UK, working for several large companies and also in Greece.

From a good start to a great finish: Automating data flow in banks