Top Posts
Could Big Tech’s Iron Grip on Digital Advertising Soon Come...
Can Recent Oil Discoveries Prove to be a Boon for...
Is It Time to Explore an Alternative to Fractional-Reserve Banking?
Can AgTech Prove Instrumental in Helping to Feed the World’s...
Can the Indo-Pacific Economic Framework Expand US Economic Influence in...
Banks Remain Uniquely Vulnerable to Sophisticated Cyber-Attacks
Home Finance Millennials Set to Influence the Future of Financial Services
Finance

Millennials Set to Influence the Future of Financial Services 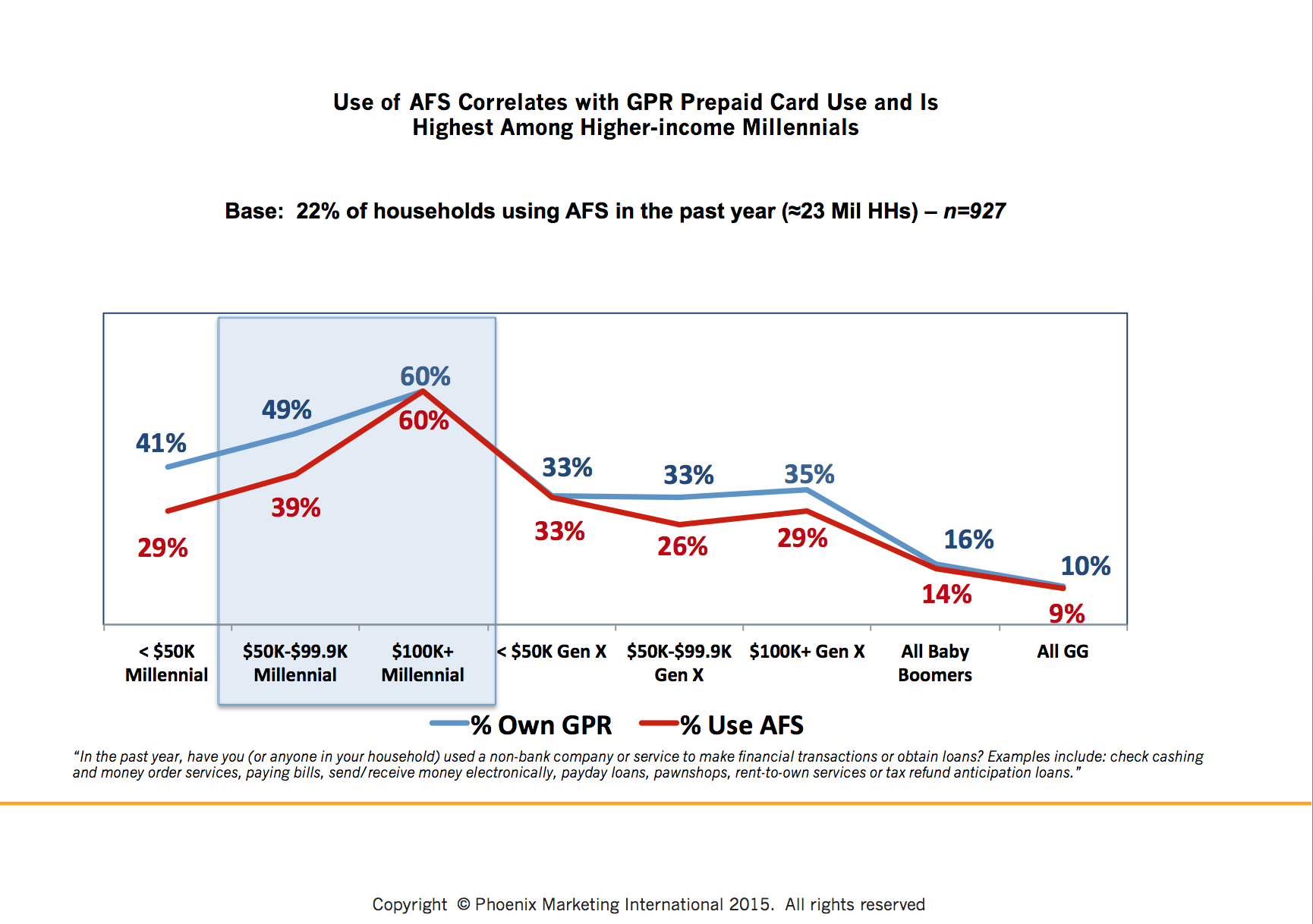 In 2012, the market research firm Phoenix Marketing International added questions related to general purpose reloadable (GPR) prepaid cards to its annual Consumer Payments Monitor survey. By 2013, the second year that responses to these questions were gathered, strong year-over-year growth in GPR cards had occurred, especially among young adults heading higher-income households. A discussion paper (“Millennials with Money: A New Look at Who Uses GPR Prepaid Cards”) on the survey results, released by the Federal Reserve Bank of Philadelphia in 2014, dubbed the group “Millennials with money”.

The spotlight that the data from the 2013 survey shone on younger consumers contributed to an incidental finding indirectly related to GPR card ownership: a group of “hybrid” financial-services consumers who “fuse traditional banking services with a complement of new and alternative options for conducting transactions and managing finances”. As a result, their “basket of payment and financial services” differed from the bundle of services used by the traditional bank customer.

After the publication of that paper, other sources reported observations in line with this intriguing finding. When the paper’s authors undertook a follow-up report based on 2014 survey data, they took a deeper look at those consumers who are embracing both traditional and alternative financial services (AFS). The results were published in a paper released in December: “Millennials with Money Revisited: Updates from the 2014 Consumer Payments Monitor”. One of the seminal findings was the high rate of AFS use within the same demographic that comprised the GPR card power-user base: 18-to-32 year-old householders with incomes of $100,000 or more.

Findings from the Consumer Payments Monitor were combined with research from other sources to gain additional understanding of the Millennial generation’s use of the broader spectrum of financial services. These findings conflict with some stereotypes of who uses AFS and GPR cards and of Millennial attitudes about traditional banking services. Young adults’ openness to new and alternative financial services doesn’t appear to threaten traditional banks or their products. Rather, Millennials are complementing conventional choices with new or different product, provider and channel options. This may be significant not only because of the phenomenon itself but because it intersects with a demographic juggernaut.

Among the 4,000+ respondents to the 2014 Consumer Payments Monitor, 22 percent had used products (such as payday or tax-refund anticipation loans) or providers (such as check cashers or pawn shops) usually categorized as AFS within the prior year. But the 22-percent rate varied greatly across age and income groups, reaching a peak of 60 percent among Millennial-headed households with $100,000+ in annual income. Coincidentally, this is identical to the rate of GPR card ownership within this same demographic.

Millennials with lower incomes use AFS at lower rates than their higher-income generational peers but at higher rates than consumers of the Baby Boom and older generations. The two generations, Millennials and Generation X, that comprise adults from the ages of 18 through 48 use AFS at above-average rates across all income groups. Consumers aged 49 and older (Boomers and older) use AFS at rates that are below the overall average. 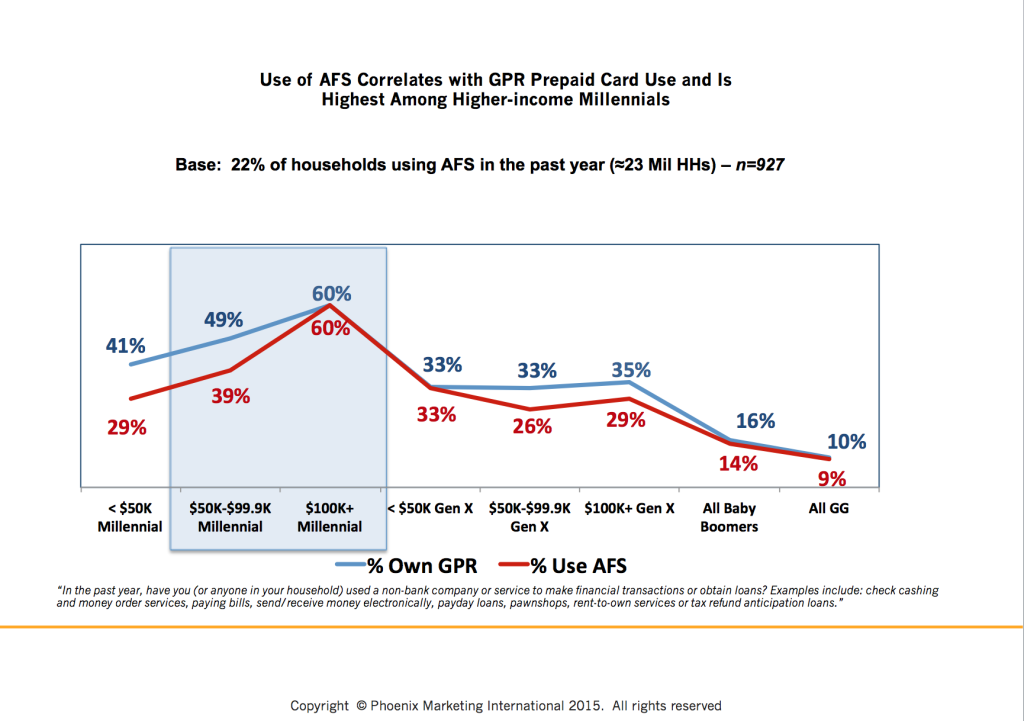 Other survey questions revealed that AFS users, particularly younger, higher-income ones, also hold checking accounts, credit and debit cards, and have high rates of smartphone ownership. With access to mainstream financial services through checking accounts and credit cards and Internet access with smartphones, why is this segment using AFS products? Diversity of needs and convenience influenced decisions to use AFS, according to survey responses. The most frequently selected responses, “bank doesn’t offer all that I need” and “bank not near home or office”, were each noted by 28 percent of respondents. Speed and costs also were factors: 27 percent said that a “bank doesn’t solve my immediate need for cash” and more than 20 percent said that, for transferring money electronically, banks take too long and charge fees that are too high. Only 16 percent said they did not maintain a checking account balance high enough to need a checking account.

For this group, if a nonbank option is more convenient, faster or cheaper, there appears to be less aversion to using AFS, even when bank services are available. It is striking, however, that this mutability is observed more prominently among the two younger adult generations. For those who are aged 49 years or older, quicker, cheaper or more convenient does not trigger the same degree of AFS use. This could be due to reflexive behavior: Long-established habits can be resistant to change. The behavioral divide between these two age groups could, however, indicate that some barrier―social, cultural, or attitudinal―to using AFS has been lowered over time. And if that has occurred, then the observation may herald a structural shift in financial-services consumption.

If services once eschewed come into more common use, then the categorization of what is considered “alternative” may be at odds with new market realities. To the extent that more American households are using AFS in combination with mainstream financial services, categorizing households as “underbanked” if they use AFS will, by definition, increase the proportion of households that is underbanked. Legacy concepts already may be influencing the very definitions of alternative, unbanked and underbanked in ways that affect how households and user groups are counted. Under the Consumer Payments Monitor’s own categorization scheme, which closely resembles that of the Federal Deposit Insurance Corporation use of certain products will, by definition, label one as underbanked, even among those who also have core banking services.

Definitions, therefore, along with demography, may be destiny. When GPR card ownership and AFS use are criteria for defining banking status, and the use of these services among Millennials appears to be on the rise, then the sheer size of that generation will combine with those factors to drive up the percentage of households categorized as “unbanked” and (especially) “underbanked”.

The Brookings Institution reports that by 2020 one in three adult Americans will be Millennials. If early patterns of financial-services consumption are the beginning of a larger and lasting trend, then policymakers, regulators and providers of financial services may need to reconsider what constitutes “mainstream” and “alternative”. The Millennial generation is large enough that its way of consuming financial services could reshape attitudes and conventions.

FICO’s research indicates that the proportion of Millennials having a primary relationship with a national, regional or community bank or credit union approaches 95 percent. They also have already amassed an average of 3.5 products with their primary institutions, a fraction more than the average for Boomers. And 21 percent of Millennials ― nearly five points higher than either Boomers or Gen Xers ― have five or more products. The strategic objectives of the relationship banking model that became widely adopted by banks in the 1990s seem to be fulfilling the vision within today’s young adult population.

Other research finds that online is Millennials’ most-used banking channel, followed by ATMs. Yet slightly more than half report visiting branches for something other than to use an ATM. The most prominent advantage of a branch was “security”, cited by 55 percent. But “personal relationships/service” was a close second, cited by 51 percent as a benefit to using branches. Even within the “wired” generation, the value of interpersonal transactions resonates for a number of its members.

Millennials began saving for retirement at a younger age than those who came before them. They started investing at a median age of 22, much younger than Boomers who began at a median age of 35. Among Millennials who have the opportunity to participate in 401(k) plans, 71 percent do so and contribute a median 8 percent of their salaries. Millennials also tend to be somewhat conservative investors.

Likewise, young adults are cautious about security issues related to financial activity. Millennials are interested in using mobile phones to conduct banking and payment activity but are more sensitive to the related security issues than are older consumers. Millennials prefer to have such services provided by trusted financial companies rather than technology or telecommunication firms.

Millennials don’t appear to be “anti-establishment”, but neither are they reluctant to try new things, or old things in new ways. They seem to take full advantage of the entire array of products, providers, channels and form factors. They have checking accounts but also use prepaid cards and check-cashing services. They have credit cards, but they also use payday loans and pawn shops. Their preferred banking channel is the Internet, but they also use branches. They use traditional services and providers, but they are open to using an alternative resource if it meets their needs. They seem markedly less likely than older consumers to reject alternative services and providers. In that respect, they appear to be somewhat “agnostic” about whether a service, provider or channel is “mainstream” or “alternative”.

In fact, what has been labeled alternative may seem quite mainstream to someone who has entered the financial-services market in recent years. What has been observed with prior generations is that these early choices often shape lifelong habits. If the early choices of today’s young adults persist over time, the “Millennial effect” could be significant. As they become a higher proportion of the US consumer base, Millennials will influence how providers of all consumer goods and services, including those providing financial services, will tailor their offerings to meet the expectations of this market segment.

In turn, regulators and policymakers, along with providers, may have to reconsider what constitutes alternative. Given its size, the Millennial generation is destined to affect the status quo in many ways, and a change in the perception of alternative financial services could be one of those ways.

The Millennial: Financial Behaviors & Needs, Angus Reid Public Opinion, February 2014. This report is available at the website of TD Bank, which commissioned the market research on which the report was based. https://mediaroom.tdbank.com/index.php?s=30403&item=34208

“These are the stocks that millennials are investing in”, by Sally French, MarketWatch, May 11, 2015, http://www.marketwatch.com/story/these-are-the-stocks-that-millennials-are-investing-in-2015-04-10?page=2.

“Millennials End Up in Stocks for Head Start on Retirement”, by Victoria Stilwell, Bloomberg, August 4, 2014, http://www.bloomberg.com/news/articles/2014-08-04/millennials-end-up-in-stocks-for-head-start-on-retirement-saving.

“How Millennials Could Upend Wall Street and Corporate America”, by Morley Winograd and Dr. Michael Hais, Governance Studies at Brookings, May 2014.