Top Posts
Banks Remain Uniquely Vulnerable to Sophisticated Cyber-Attacks
Western Banks Willing to Accept the Short-Term Pain of Russian...
Why the US Is Ramping Up Its Presence in Somalia...
How Technology Is Helping to Solve Global Supply-Chain Issues
UK Inflation Climbs to Fresh 40-Year High
Extended Reality and the Metaverse Are Leading Financial Services into...
Home Finance Morales’s Ouster Leaves Bolivia’s Economy in Precarious Position
Finance 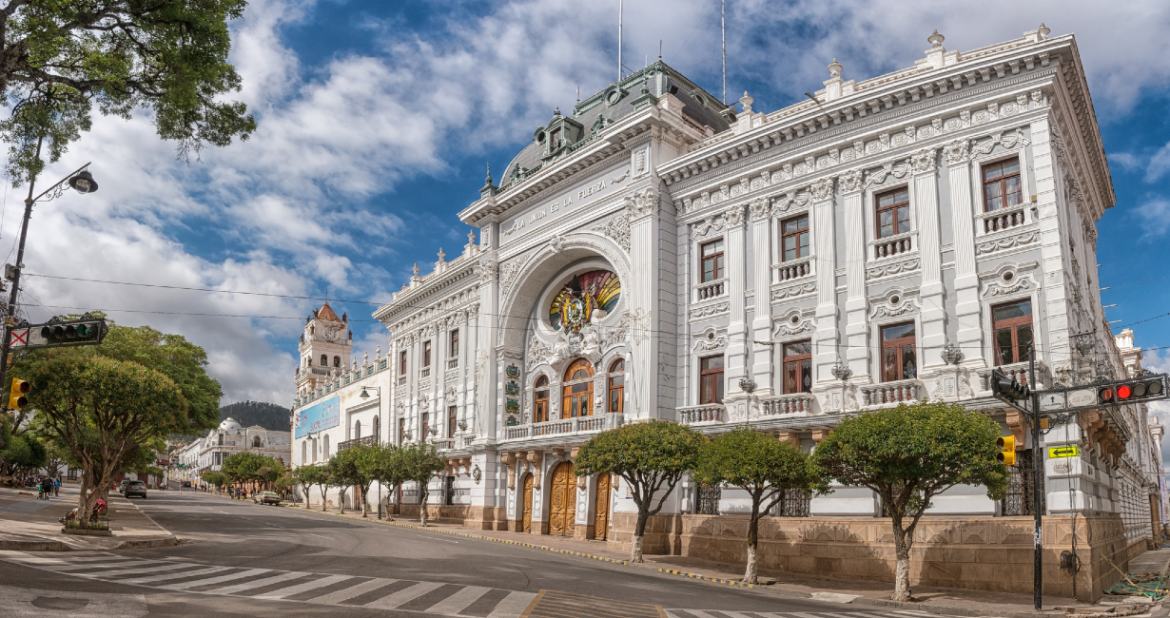 It’s been an eventful last few months for Bolivia, especially since October, when then-President Evo Morales, the country’s leader for more than 13 years, was forced from his position on the back of a disputed election.

One of the most economically successful of Latin America’s new crop of leftist leaders who emerged in the new millennium, Morales, a member of the Aymara indigenous group, presided over more than a decade of robust economic growth. His nationalisation drive, as well as public ownership of natural resources and specific sectors of the economy such as hydrocarbons, ended up being crucially important for generating funds to embark on what was ultimately a successful public-investment programme and redistributive fiscal regime that hugely benefited the country’s lower-income cohorts. And while his initial campaign prior to taking power was based on nationalisation across the board, Morales ended up compromising where it made prudential sense to do so, forming strategic ties with foreign bondholders and mining companies.

But amid his attempts to seize a fourth presidential term, Bolivia descended into political unrest as widespread allegations of electoral fraud emerged. According to the Organization of American States (OAS), the election was littered with irregularities. With the military deciding to side with the government’s opposition protesters, the armed forces’ chief called on Morales to step down, which he did on November 10 before fleeing the country a day later. Opposition Senator Jeanine Áñez then took over as interim president.

But while the integrity of the election may continue to be in dispute, there is less dispute over Morales’s laudable economic record. During his presidency, which began in 2006, Bolivia’s economy was one of the fastest growing in all of Latin America, with the World Bank (WB) recording an impressive average gross domestic product (GDP) growth rate of 4.9 percent between 2006 and 2018. According to the Center for Economic and Policy Research (CEPR), real (inflation-adjusted) per- capita GDP grew by more than 50 percent over Morales’s 13 years at the helm. This was twice the rate of growth for the Latin American and Caribbean region. “Even as the Latin American regional economy slowed over the past five years, Bolivia had the highest growth of per capita GDP in South America,” the Center noted last year. Indeed, the International Monetary Fund (IMF) estimated that GDP tripled during Morales’s time in office; and although it remains South America’s poorest country after Venezuela, poverty declined substantially from 59.9 percent in 2006 to 34.6 percent in 2018. Extreme poverty also declined precipitously during this period: 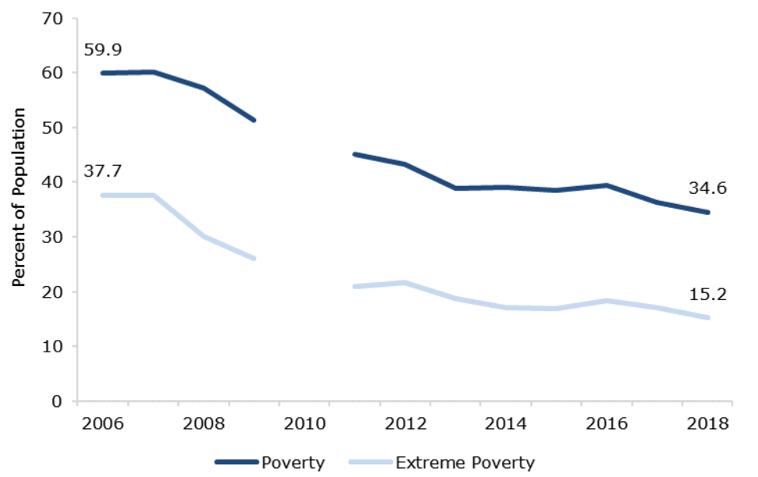 Poverty Rates as Measured by Income (in percent of population)
Source: CEPR

The CEPR also attributes the renationalisation of hydrocarbons in 2006 by Morales as being pivotal in generating much of Bolivia’s economic and social progress. The first eight years of the Morales Administration saw national government revenue from hydrocarbons increase nearly sevenfold from $731 million to $4.95 billion. “Although some of this was from price increases, most was a result of the nationalization and associated policy changes.” And thanks in large part to high gas prices, Bolivia was able to generate commanding revenues from its gas exports until around 2015. Those revenues allowed Morales to achieve both a fiscal surplus and more spending on social programmes for well over half of his time in office.

The latter years of the Morales presidency did not have the same shine, however. When oil and gas prices collapsed in 2015, the administration replaced the lost revenue with even higher government spending. This fiscal expansion widened the budget deficit, which since 2015 has been around 7.5 percent of GDP. Bolivia’s current account deficit was also stretched, hitting an average of 5 percent of GDP during the same period. As such, the country’s currency reserves have been significantly depleted in recent years and to such an extent that rating agency Fitch declared that it no longer has enough to support its fixed exchange rate of just under seven bolivianos per US dollar. “To sustain a fixed exchange rate in the context of high commodity dependence, you need a very large stock of reserves, and we no longer think that Bolivia has the war chest that it needs,” Fitch analyst Todd Martinez told Bloomberg in January.

Fitch had already downgraded Bolivia to four notches below investment grade in November due to those dwindling reserves as well as because of the political unrest following Morales’s exit. With gas revenues incapable of supporting the currency peg, reserves ended up dropping from $15 billion in 2015 to less than $8 billion last year. “Bolivia’s fiscal, monetary and credit policies have all been highly stimulative, and the bottom line of all of that has been a very rapid draw-down on international reserves for the last few years,” Martinez observed. “So, we already think the levels of reserves are no longer fully adequate to mitigate risk given that economic profile, and there’s a lot of uncertainty around what the plan is to stabilize those reserve levels going forward.”

Bolivia is preparing to vote for its next president in May, having installed an interim government in November in the wake of Morales’s exit. According to Fitch, the newly elected president will have to address as a priority the “triple whammy” of lower gas prices, falling gas production and lower demand from neighbouring Brazil, as South America’s biggest country has instead relied on its own offshore pre-salt reservoirs as well as liquefied natural gas (LNG) imports. Argentina’s demand for Bolivia’s gas exports is also likely to decline on the back of the growing development of its significant shale reserves. Efforts are being made to boost exports to Paraguay and Peru, as well as to directly supply Brazil’s private-sector gas distributors in Brazil. But as Ruben Ferrufino, an economist at Bolivia’s business chamber, recently acknowledged, “Natural gas is not going to have the same role as in the past. It will remain important, but revenue is falling, and that will put pressure on government accounts. There will be changes even if the president is re-elected.”

La Paz, Bolivia’s administrative capital, will also have to reverse its widening fiscal deficit and current account balance. But an austerity programme risks stoking protests, similar to those that have flared up recently in Ecuador and Chile. The president of the central bank, Guillermo Aponte, recently confirmed that one of the biggest priorities is to bring the fiscal deficit down to 6.6 percent of GDP from 7.2 percent last year and 8.1 percent in 2018. According to Aponte, “We are on the right track”; with the new government set to take office in June or July, it should “be able to start its management without any frights in this area of ​​the economy”. To that end, a 2020 Financial Program was recently signed by the central bank with both the Ministry of Economy and Public Finance and the Ministry of Development Planning. “The fiscal deficit caused by the actions of the previous administration was controlled. The goal that is established in the fiscal program is to reach a deficit of 5 percent of GDP by 2022,” Aponte emphasized.

But economist Germán Molina Díaz recently warned that with the level of public debt having risen recently, the country should aim for a primary fiscal surplus in the coming years. “The next government that assumes the new 2020-2025 government management will face very strong restrictions to face a process of economic growth and social policies,” he said.

Bolivia’s economic forecast for 2020 remains uncertain at this stage. While the IMF and Bolivia’s central bank have been bullish, touting 3.8-percent and 3.5-percent growth respectively, Fitch has predicted just 1 percent. Either way, it will be Bolivia’s lowest annual growth since the global economic crisis in 2009. But Martinez noted that a “worst-case scenario” of a severe contraction will be avoided. As the CEPR stated, Bolivia now faces challenges common to those of a middle-income country, with industrialisation and economic diversification identified as the biggest medium-term goals by authorities. “Continuing the government’s successful macroeconomic management, while maintaining inclusive social policies as the country pursues further transformations in the next stages of economic development, remain the primary challenges going forward.”

Interim President Áñez herself is running for the presidency, which means she is unlikely to take any drastic measures until the election is concluded. Morales believes that she is part of a “crafty and nefarious coup”, and his supporters have promised to protest across the country until he returns to power. Until then, the economic outlook remains difficult to gauge, which, according to Martinez, is hurting the economy. Similarly, Moody’s Investors Service put Bolivia’s rating on review for downgrade in December, due to the heightened political risk, which has “materially increased policy uncertainty”. As such, the most important goal for Bolivia in the immediate future is to ensure that the election is both free and fair and that the handover of power to the next president instils confidence in the public once more.

How Tech Can Help the Many Faces of the CFO